ONE DAY AT
breakfast, there was a letter next to Weezer’s plate.

The show was only a few days away. Three blue tickets were pinned to the bulletin board in the kitchen.

For the past couple of weeks, I’d been trying to tell Weezer that the chances of Dad coming to watch her being a Little Swan were very small.

“He won’t have to,” I said. “You know Miss Matting will put the whole show on video. She’ll lend it to us when he’s here. Then he can see you.”

“It’s not the same,” was Weezer’s answer. “It’s not like watching it live.”

“But it’s nearly the same,” I said. “You might have to settle for that.”

Now Weezer was turning Dad’s letter over and over in her hand.

“Me too,” I said. “I kept telling her. She wouldn’t listen. She only listens to things she likes hearing. I’ll go and talk to her. What does Dad say in the letter?”

“He says, ‘Although I won’t be there, I know you’ll be terrific. I’ll be thinking of you every minute. When I see you at Christmas, you can show me the video.’ How did he know about the video?” Mum asked.

“I think Weezer must have told him. She spoke to him on Sunday. She was very excited about it then. She liked the idea of being able to play a film of her performance over and over again. She even said she was going to show it in school.”

“I’d better go and see if I can make her feel better,” Mum said.

Weezer had almost cried herself dry by the time I reached her. Her face was red and puffy.

“Are turkeys red in the face?” she said.

“Redder than Little Swans,” I said. “Go and wash your face in very cold water. Then we’ll work out who’s going to get the extra ticket.”

“I’ve already decided,” said Weezer. “I’ll tell you when I get back from the bathroom.”

When she returned, Weezer said: “Can you guess who I’ve thought of?”

“Mrs Posnansky,” Weezer announced. I
stared at her.

“But why?” I asked. “We hardly know her. We’ve seen her a couple of times to say hello to, and you carried her shopping home once, but that’s it. Won’t she think it’s strange? Some child she barely knows offering her a ticket to a dancing show?”

“She
does
know me. And she’s Russian,” said Weezer, as if that explained everything. “She said she loved the ballet. She said it the very first time we spoke to her. After my first class. Don’t you remember?” I did remember. Weezer had nearly knocked poor Mrs Posnansky over. When she said she loved the ballet, she probably meant proper professional dancers. I was sure she didn’t mean a lot of little girls who had only just started to learn. But I wasn’t going to tell Weezer that.

I said, “Fine. That’s a great idea. Let your face get back to normal. Then you can go over to her house and offer her the ticket.”

“Because,” Weezer said. Her lip was looking a little wobbly. Her eyes shone as though she might start crying again at any moment.

“All right,” I said. “I’ll come.” I like visiting people. And I was curious to see what Mrs Posnansky’s house was like, anyway. “Let’s go down now and tell Mum what we’ve decided.”

Mrs Posnansky took a long time to come to the door.

“She walks slowly,” Weezer explained. “She sometimes has a stick to help her. She told me so.” At last, Mrs Posnansky reached the door and opened it.

“Aah!” she said when she saw us. “Is the little ballerina and her sister. Please to come in.” She shuffled off down a long corridor and went into a room. Weezer and I followed her. The house was very dark. The furniture was old-fashioned. Weezer and I sat on a big sofa. There was a glass-fronted cabinet full of ornaments. The curtains were made of dark green velvet. There were photographs on the walls of ladies in long dresses and men in furry hats. Some of the ladies had babies on their laps. The babies were wrapped in lacy shawls.

“Please,” said Mrs Posnansky, “you will drink the tea. I fetch. Please to wait.”

Mrs Posnansky brought the tea in on a silver tray. There were lemon slices in the tea,
and no milk. We drank it from tall glasses that had gold-painted rims. Each glass had its own silver holder, so that we could pick them up without burning our hands.

“Now,” said Mrs Posnansky. “I find chocolate.” She hunted around in another cabinet. This one was made of dark wood, carved into patterns of flowers and fruit. At last, she found a long, flat box.

“Is called ‘Langues de Chat’,” she said.
“Tongues of cats. I love when I am little girl.” The chocolates were long and thin, and lay in a row in their box, packed in crinkly brown paper. 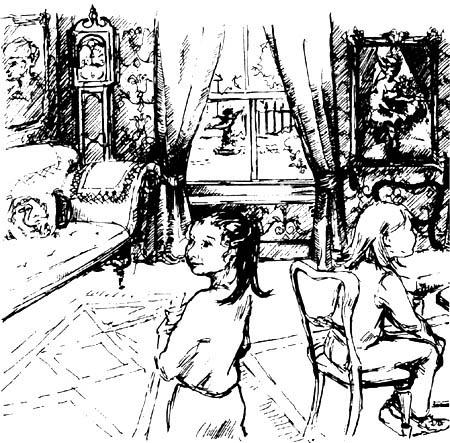 “Oh!” Mrs Posnansky clapped her hands.
“Is most marvellous. How you are kind, to think of me. I love to come. Yes, please. Thank you million times. My mother was a dancer. I will show. Come.” 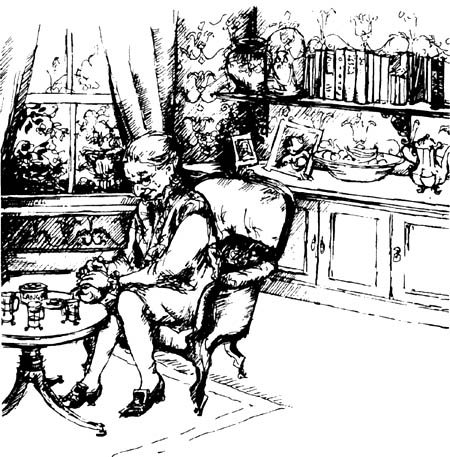 She beckoned to me and Weezer and pointed to a photograph high up on the wall.

“This is Mother in corps de ballet. In Paris. In
Giselle
. Is nearly same as you, no?”

“You come one day,” said Mrs Posnansky, “and I show you all old photographs. Is most interesting.”

“That’ll be lovely,” I said, “but we should go now. My mother says she’ll pick you up in the car on Saturday to go to Weezer’s show, and bring you back afterwards.”

“Thank you, thank you, my girls,” said Mrs Posnansky. “I am most exciting.” She walked us all the way to the front door and held it open. She waved at us till we’d closed the door of our own house.

“I knew that,” Weezer snapped. “You don’t need to tell me. I always know exactly what she means.” 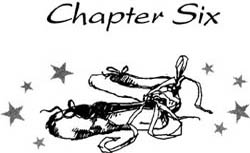 ON THE NIGHT
before the show, Weezer came over to my bed. She shook me till I woke up.

“No, you are not,” I said. “All ballerinas are good sleepers. Everybody knows that.”

“I am not. It’s true.” It wasn’t true. I
was
making it up. Still, it seemed to work. Weezer went back to bed. I thought she’d fallen asleep. Then I heard her say, “I’m nervous, Annie. What if I forget the steps? What if I fall over? What if my dress gets torn? What if—”

“Stop!” I said. “You’ll be wonderful. I know you will. You have to be a bit nervous. If you’re quite calm, you won’t do your best.”

“Is that true?” Weezer asked. She was sounding sleepy. 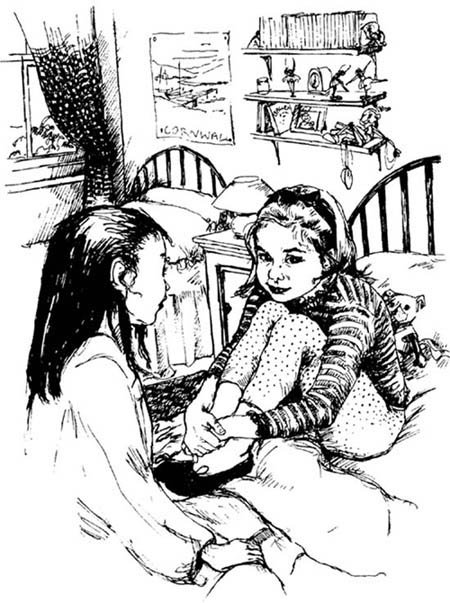 “Yes,” I said firmly. “All dancers are nervous before a performance.”

“That’s OK then,” Weezer said, but she was asleep before she’d finished speaking.

“Dancers are nervous,” I said, “and dancers’ sisters are exhausted.” Weezer was breathing noisily by now, and I was wide awake. I fell asleep counting swans.

On Saturday, Weezer said she was too nervous to eat breakfast. She wanted to be the first person in the theatre for the show.

“You can take me, Annie. You can help me dress.”

“Go on, Annie,” said Mum. “Take her good and early. Otherwise she’ll drive us mad with her nagging.”

“Please don’t be late,” Weezer said as we left. “The people who get there first have the best seats. And please tell Mrs Posnansky when she has to be ready.”

“Yes, love,” said Mum. “You go with Annie. Let me worry about Mrs Posnansky and where we’ll sit.”

Weezer must have been even more scared than I thought. All the way to Fairvale High School, she didn’t say a word. She held her
pink suitcase tight and looked down at her feet.

When Weezer and I are old enough, Fairvale High is where we’ll go to school. Miss Matting puts on her show there every year. The school has its own theatre. There are real stage lights. The curtains are blue velvet, and there are two large dressing rooms. The girls share one and the boys share the other.

“Look,” said Weezer as we went into the girls’ dressing room. “See these light bulbs around the mirror? They’re just like the ones in a real theatre. Aren’t they?”

“Yes,” I said. “Fantastic. Find a nice spot to put your things, and I’ll help you with your make-up. Is your costume on the rail here?”

“I’m not touching,” I said. “I’m just looking. These are the swan ones, aren’t they?” I pointed at some gauzy white material. Weezer nodded.

“Yes, those white ones are for the swans. The other stuff is for the girls in the advanced classes. They’re clowns, and flowers, and also bluebirds, I think.”

“Wow! How many girls are going to be changing in here?”

“About fifty,” said Weezer. “But not all at the same time. Our class is first. When we’ve finished, the bigger girls come in. They have to wait in one of the classrooms till Miss Matting tells them it’s time to get dressed.” 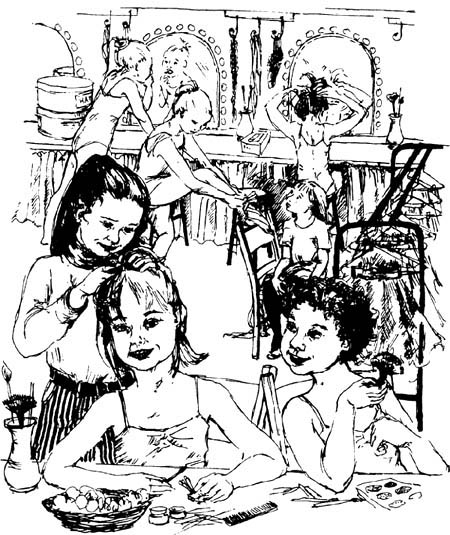 This Man and Woman by Ivie, Jackie
Teacher Beware (A Grace Ellery Romantic Suspense Book 1) by Charlotte Raine
Goal Line (The Dartmouth Cobras Book 7) by Sommerland, Bianca
Rescue of the Bounty: Disaster and Survival in Superstorm Sandy by Michael J. Tougias, Douglas A. Campbell
Dare to be Mine by Allison, Kim
Ghost House Revenge by Clare McNally
Snow One Like You by Kate Angell
Peace Army by Steven L. Hawk
M or F? by Lisa Papademetriou
Lucia by Andrea Di Robilant