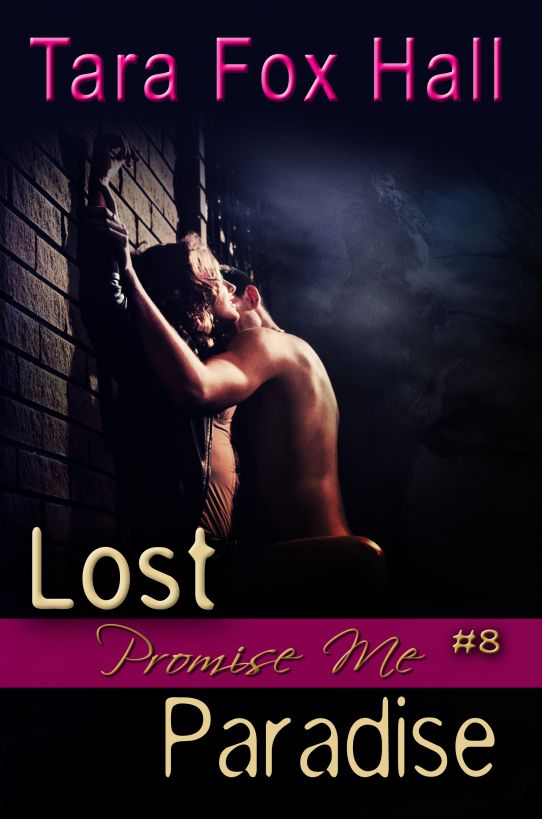 While the vampire Devlin rejoices at news of
his impending progeny with Sar, werecougar Theo braces for more
challenges to his Ranked title, content that after Sarelle has the
dhamphir child Devlin will be out of their lives forever. Yet when
The Lust reappears, Sar’s world again turns upside down as old
hatreds make themselves known, resulting in a steamy affair with
the weresnake Lash, a new friendship with the werecoyote Serena,
and the severing of Sar from the last remains of her old human life
in favor of a new Paradise with Devlin.

To TOR, for all her tireless work helping me edit
the Promise Me series.

Thank you for being my friend.

When I woke up the next morning, my
werecougar lover Theo was still sleeping beside me.

The problem was likely all that scotch my
stepfather had plied him with in celebration of us becoming
parents. Deciding to wake him after breakfast was ready, I left him
sleeping and went out to my hungry and vocal pets.

After I got the sausage cooking more than a
half hour later, I began to be concerned. Usually Theo was in the
kitchen by now with plate in hand, waiting for the first piece to
be done. But he hadn’t emerged from the bedroom. Hoping he wasn’t
sick, I went in to wake him.

“Theo,” I said firmly, shaking him.

Even if the scotch were to blame, his body
would’ve metabolized it by now.

“Theo!” I said loudly, then felt for his
heartbeat. It was beating, but slowly, much too slowly. His skin
was hot to the touch, burning with fever. He wasn’t sleeping; he
was unconscious.

He’d been poisoned!
Theo had almost
the same symptoms my vampire paramour Danial had when he had been
poisoned years ago. Danial had mentioned the assassins after him
and Theo only days before, when we had celebrated our recent
Oathing—a vampire version of marriage—with a late honeymoon at
Letchworth State Park. One of those assholes had gotten to Theo
somehow. But this time, I couldn’t save the day. My blood that had
once helped a stricken and dying Danial was useless to Theo.

Panicked, I ran for the phone.
I needed
sorcery to undo this. I needed Titus!
Thank God for Danial
having a brother who wielded considerable power…and that Devlin was
also my lover, under the terms of the same Oath that bound me to
his brother. Devlin’s demon sorcerer was sure to know an antidote.
At this moment, it didn’t matter if Titus ate people so long as he
saved Theo’s life.

I clutched the phone, started to dial Hayden,
then stopped.
Was it better to just teleport to Titus at
Devlin’s estate, or call him first? What if this was some type of
were poison? Could it affect other weres besides cougars…Oh God,
Elle had been around Theo all night. God, please let her not be
sick, or dead!

I called Danial’s cell immediately. It went
to his voice mail.

I dialed Terian, Danial’s half demon/half
faerie bodyguard. He answered after seven rings, his voice heavy
with sleep. “Hello?”

“Terian!” I screamed. “Get to Elle now! I
think she’s been poisoned!”

“Keep her away from other weres if she’s
sick!” I gasped, hyperventilating.

“I’ll meet you there!” Terian replied, and
hung up.

I held onto Theo and teleported, ending up in
the kitchen at Hayden. We scared the hell out of some blond
woman.

She ran out of the room screaming, “Hayden is
under attack! Help! Help!”

There was the sound of feet running down the
stairs, then Devlin was before me, his dark shadow of a guard Lash
right behind him. He lunged in front of Devlin and faced me, his
gun drawn.

“Get back!” I yelled at him. “This might be
were poison! I need Titus!”

Lash—a were himself, of the cottonmouth
persuasion—stopped in his tracks at the word ‘poison’. To my
relief, he nodded and backed out of the room, his non-human snake
eyes on Theo. Devlin came past him to my side and crouched down.
“What happened to him?” Devlin asked, the expression on his
handsome face half worried, half irritated.

“Theo’s unconscious,” I gasped, then toppled
over myself onto the floor.

“Sar!” Devlin yelled, all traces of his
arrogance gone. He punched buttons on his cell, then screamed into
it, “Titus, get your ass here now! Sar’s sick! It may be
poison!”

Seconds later, the demon Titus was beside me,
a red light emanating from his hand bathing my skin. “Poison for
sure,” Titus said with a lot of hostility. “Were poison. It’s
affecting Sar because of the child she’s carrying.”

“Heal her!” Devlin demanded. “Do whatever you
have to. Don’t let her die!”

“I can’t do anything,” Titus said, cutting
Devlin short. “The cure might hurt the baby. Sar will be fine if
she rests. She’ll just feel as if she has a cold. I need to work on
Theo, though, Dev. He’ll die if he isn’t treated soon.”

Devlin glanced down at Theo, then his gaze
beheld me a second before his golden eyes looked away.

“Save him, Titus,” Devlin said with a sigh.
“She might die if he dies.”

“Rest, Sar,” Titus said, his deep voice
soothing. “I’ll draw out some of the poison that’s in Theo. It’s
most likely just cougar-targeted, so everyone else should be fine
even if some of Danial’s men were around Theo at your house.”

Elle…
I moved to get up, then lay back,
sickened. Devlin crouched near me, murmuring soothing words as
Titus worked on Theo, incanting some spells that seemed to have no
effect. Then, miraculously, Theo stirred slightly. He sat up at
once, opening his grey blue eyes which fast became incredulous.

I went weak with relief. Devlin and Titus
moved back, rising to their feet.

Theo noticed me prone beside him. At once, he
pulled me up into his arms, cradling me. “What happened to us?” he
asked. “Are you okay?”

“You were poisoned,” Titus said in his low
grating tone. “You were near death when Sar brought you here. I
gave you an antidote which will draw it out of you. You should be
fine in a few days.”

“I’ll pay you,” Theo said stiffly, not
smiling. “Thanks.”

I let out a scream, Theo started, and Devlin
rolled his eyes in disgust. “Just great!” he said accusingly,
glaring at Theo. “How many others did you infect?”

“How is she?” I asked hysterically, my eyes
all for Elle. She looked pale as death.

“Elle!” Theo cried, staggering as he tried to
get to his feet.

“Keep back from her,” Titus warned. “You’ll
re-infect yourself, cougar.”

“She’s conscious, just barely,” Terian said
worriedly. “Danial is beside himself. What happened?”

“Poison,” Devlin said, getting to his feet.
“Meant for Theo, probably.”

“Give her to me,” Titus said, motioning to
Terian. “I’ve got to make more of the antidote. Come with me to my
lab, son, and I’ll show you what to do. Odds are, you’ll be making
it again soon.”

My skin crawled at his surety. Theo had more
than one hit out on him.
What if Titus was right. What if this
happened again?

“You’ll be fine, Theo,” Devlin stated,
glaring at his rival, whose eyes were all for Titus as he took Elle
downstairs. “Go home and get some clothes on before we all go
blind. I’m going back to bed.”

“Here.” I handed Theo my blue velvet
bathrobe. He took it, covering himself.

Devlin helped me to my feet. “Did you get
anything in the mail, Sarelle?” he said, his worried eyes searching
mine. “This poison came in contact with you somehow. You and Elle
wouldn’t have gotten sick just from being near Theo unless he had
some on his skin.”

An enemy had tried to poison Theo with
something similar only last Christmas, sending a package for Theo
through the mail to my house. The deadly missive had been
intercepted, barely. “Nothing, there was nothing—”

“It was the cat,” Theo interrupted, running
his hand through his hair. “I’ll bet anything it was on the cat I
found in our woodshed.”

“Danial’s new cat?” Devlin said angrily.
“Someone put poison on it? Bad enough they abandoned it in
mid-winter—”

“How could they do that?” I asked. “Wouldn’t
the cat just have licked it off and died?”

“Remember, it was sick,” Theo said bitterly.
“It’s probably known you like cats, that you have some as pets.
Someone left it there for you to find, figuring you would bring it
inside to take care of and I would be exposed. After I found it, we
kept it in the garage because it was sick. To ensure your cats
didn’t get sick, I washed my hands and changed my clothes after I
took care of it every time. That must have delayed the poison
affecting me. I haven’t felt sick or weak until I woke up on the
floor here.”

“Makes sense,” Devlin supposed. “But risky.
What if it got killed before giving the poison to you or managed to
groom itself enough to get the poison off?”

“There’s been nothing else out of the
ordinary,” Theo said, rubbing his eyes. “This explains why the cat
had a cough when all its tests were negative. The vet said he
wasn’t sure exactly what had caused it, that maybe the cat had
inhaled some chemical?”

“This stinks of that bastard Robert,” Devlin
interrupted. “You know he’s after you—”

“Please have Terian call us the moment Elle
awakens,” I asked Devlin.

He nodded. “Get some rest. I’ll call you
later.” He turned and walked back upstairs.

Lash went to follow him, then stopped
suddenly, watching Theo and I. Theo growled at him. Lash just
smiled a little, then looked pointedly at me for a long moment, a
smirk on his face.

I reddened. Since the early days of my
current pregnancy—and the previous one with Danial’s half vampire
child, I had been afflicted with The Lust, a desire that hit me in
odd moments. It compelled me to rash actions of a sexual nature,
usually eliciting violence along with the coupling. Lash had been
the target only weeks ago, an event the weresnake clearly hoped to
rub in everyone’s face as much as possible.

Theo growled louder, his warning obvious.
Lash shot him an easy grin, baring his fangs, gave me a final look,
then went after Devlin.