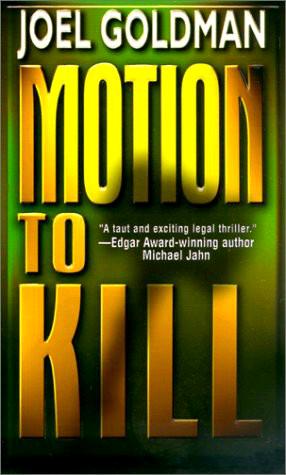 Only a few months after Lou Mason joins the Kansas City law firm Sullivan & Christenson, the firm's rainmaker and senior partner, Richard Sullivan, turns up dead. At the same time, Lou learns that the attorney general suspects the firm and one of its top clients of fraudulent business dealings. As the newest partner and the one most removed from the scandal, Lou is asked by his old friend and partner, Scot Daniels, to ward off the feds, but he soon finds information that may incriminate Scot and another of the firm's partners. Meanwhile, Sheriff Kelly Holt, a "slap-on-the-cuffs dream come true" beauty who is curiously inept, suspects Mason of Sullivan's murder until someone tries to kill Mason. To prevent further attacks against his person, Mason hires his friend, PI Wilson Bluestone (Blues), to act as his bodyguard. With a hit man on Mason's tail and Blues and Holt providing backup, the action accelerates and the fight scenes multiply. First-time author Goldman does an admirable job of maintaining the novel's high tension, but his apparent contempt for his characters, and for corporate lawyers in general, will distance readers from his protagonists. Nevertheless, Goldman's secondary characters particularly Blues and a twisted hit man add flavor to this mediocre thriller, and a series of fierce action scenes carry the reader toward an electrifying denouement.

When two of his partners are killed, corruption, sex and murder fill trial lawyer Lou Mason’s docket as he tracks the killer. Will Lou be the next victim? Find out in Motion to Kill.

Lots of suspense and a dandy surprise ending. ---Romantic Times

Begin Reading
Table of Contents
Copyright Page
For Hildy, the wife of my life
CHAPTER ONE

Her voice was pure matter-of-fact, as if she had told him to check the tires and the oil. He caught a quick dip in her shoulders, as if she was dropping her burden of bad news in his lap. Still, she said it with a practiced weariness that convinced Mason she was used to violent death. He wasn’t. He was accustomed to family deaths, natural causes, and ritualized grieving. Floating bodies were not part of Mason’s life-cycle résumé.
Barring a freakish case of mistaken identity, Mason knew that Sullivan was dead. The odds of his ID being mismatched with a stranger were slim. Mason didn’t know him well enough to grieve honestly. Partners are harder to get to know than spouses or friends. Agendas overlap only on narrow ground.
His emotions were a mixed bag that didn’t include grief. He was more relieved than sorry. Sullivan’s suggestion that Mason destroy evidence in the O’Malley case would be buried with him. Mason could stay at the firm if he chose. Yet he couldn’t muster any enthusiasm for reversing his decision to leave. There was no glory in defending Victor O’Malley. His aunt Claire’s warning that he wasn’t cut out to fight over other people’s money, especially when the money was dirty, echoed in his mind.
His recurring dream of Tommy Douchant’s trial reminded him of unfinished business that he would have to complete on his own. Sullivan’s death may have shown him the way out instead of the way back in.
ADS
15.4Mb size Format: txt, pdf, ePub

Defining Moments by Andee Michelle
We Are Holding the President Hostage by Warren Adler
5th Pentagram: The sequel to the #1 Hard Boiled Mystery, 9th Circle (Book 3 of the Darc Murders Trilogy) (Book 3 of the Darc Murder Series) by Hopkin, Ben
Holiday in Your Heart by Susan Fox
Dead of Winter by Lee Collins
The Body in the Bonfire by Katherine Hall Page
Dust of Dreams by Erikson, Steven
Acts of Courage by Connie Brummel Crook
Collaborators by John Hodge
El hombre es un gran faisán en el mundo by Herta Müller