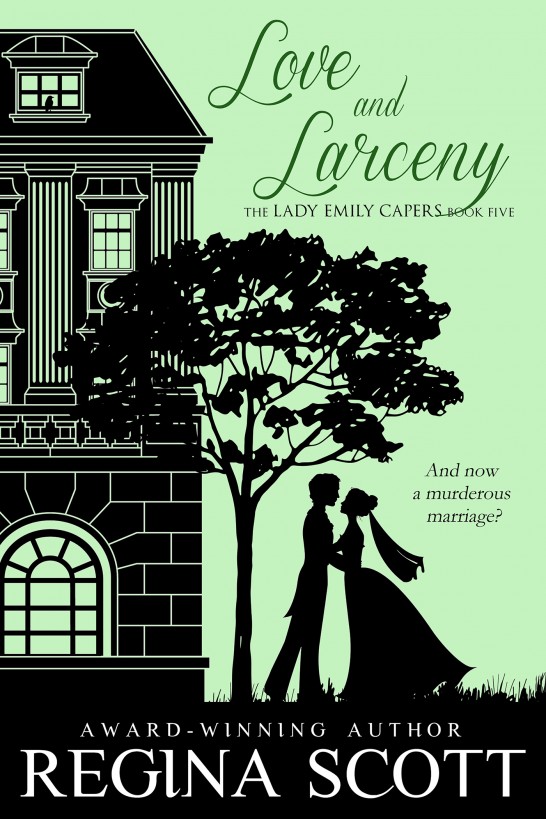 Book 5 in the Lady Emily Capers

This eBook is licensed for your personal
enjoyment only. It may not be re-sold or given away to other people
unless it is part of a lending program. If you’re reading this book
and did not purchase it, or it was not purchased for lending,
please delete it from your device and purchase your own copy. Thank
you for respecting the author’s work and livelihood.

To my beloved hunters—you know who you
are!

And to the Lord, who loves us whoever we
are.

Sneak Peek: “An Engagement of
Convenience”

Daphne Courdebas was known throughout London
as an Amazon. She rode better than most of the gentlemen, could
drive four-in-hand, and had once dangled off a ledge in a ball gown
to protect a friend from a murderous jewel thief. The fellows found
her fascinating. The ladies were either awed or aghast at her
exploits. She could have given them an easy explanation for her
bravado. She’d simply learned that her brain worked better when she
was moving.

That was why she took Hortensia out earlier
than usual that day. The black-coated mare flew along Rotten Row,
her hooves kicking up the golden sand on the track, as the trees of
Hyde Park flashed past. Daphne’s thoughts flew nearly as fast.

What was she to do about Miss Alexander’s
request?

No, no, not Miss Alexander. She must remember
her former art teacher’s new name and position. Hannah Alexander
was now Lady Brentfield. And she had begged Daphne and her sister,
Ariadne, and their friends Priscilla Tate and Lady Emily Southwell
to come to her aid.

“Even though David has had all the secret
passages closed off,” she’d written, “I know strangers are
frequenting the manor. Art is once more missing, and the servants
report hearing noises in the night. It is a mystery that must be
solved.”

Of course, Emily had agreed. Emily lived to
solve mysteries, and she was very good at it. Ariadne said it was
because she saw the details of any scene with her painter’s eye.
Daphne thought it was more likely because Emily generally saw the
dark in any situation.

Either way, Emily had been ready to journey
to Somerset right then. Priscilla had agreed nearly as eagerly—any
reason to take her betrothed, Nathan Kent, away from his demanding
family. Even Ariadne and her betrothed, Lord Hawksbury, were going,
because a mysterious manor was simply too picturesque to
forego.

And then there was Daphne. Since before she
and her friends had graduated from the Barnsley School for Young
Ladies that spring, she had struggled to find her place. She’d
tried being prim and proper at first, but the rules of Society felt
more confining than a badly fitted corset. She’d embraced her
adventurous nature and shocked her mother and many Society matrons
to the point where her invitations had dwindled. It seemed
impossible to find that middle ground.

Now, here she was, unattached and alone, the
last of her friends, against all odds, to find a beau.
Conversations in London were bad enough these days, with Priscilla
and Ariadne prosing on about whether bridal dresses should be gray
or white and if Moroccan slippers should be allowed at wedding
breakfasts. Just as bad, Emily moped because her inamorata, Jamie
Cropper, had yet to propose even though she might actually be able
to convince her father to allow her to accept because their last
caper to uncover a French spy had resulted in Jamie being knighted.
Daphne must remember to call the Bow Street Runner Sir James when
next they met.

But with everyone mooning about, how much
worse would it be at Brentfield, where everyone around Daphne was
either married or about to be? She felt as if she were a dress
everyone had outgrown.

She reined in Hortensia, praised her beloved
steed for her speed, then turned her to trot back down the path.
Perhaps she should stay home. Her father was remaining in town
while her mother chaperoned Ariadne in the country. But already
London was beginning to thin of company. And she’d miss catching
the thief. She was the one her friends relied upon for feats of
physical prowess, after all. She was the one most likely to be of
assistance this time. If only she didn’t feel like a spinster!

Daphne looked up to find a gentleman
approaching, astride a silver-gray horse. Gentlemen were always
approaching her, to challenge her to a race, to beg her for a dance
at the next ball. Though they crowded her sitting room as well, not
one had been moved to offer marriage. She was deemed a great gun, a
good sport, one of the boys. She still felt alone.

Except with Wynn Fairfax.

She smiled now as her new friend reined in
beside her. Wynn always looked slightly startled. Perhaps it was
the way his hair, as dark as hot cocoa, tended to fly around his
firm-jawed face. Perhaps it was the wide, sea-green eyes that
blinked behind gold-rimmed spectacles. Either way, he returned her
smile now as he patted his horse’s powerful neck.

“You’re out early,” he commented.

“A great deal on my mind,” she confided.

His smile broadened. “And it’s easier to
think astride.”

“Exactly!” Daphne beamed at him and watched
his cheeks turn pink. It was amazing to think that a gentleman
might be embarrassed by her appreciation and not the other way
around. It was equally amazing how well he understood her when
they’d known each other only a month.

She would never forget the night they’d met.
She had accompanied Ariadne and their friends to the hallowed halls
of Almack’s, that exclusive ladies’ club. Ariadne had been there
because she had fallen in with the intelligence corps and had been
tasked to identify a French spy. But the spy had taken her captive
and threatened her life before making his escape.

Daphne had gathered up her silk ball gown and
followed the miscreant down the stairs and out the door, but she’d
quickly realized that even she couldn’t run him down in dance
slippers. Glancing around, she’d spotted a trim high-perch phaeton
stopped in traffic, with a young man in a many-caped greatcoat at
the reins. Surely she was looking at a Corinthian, those sporting
types who even drove their own carriages. Leaping up beside him,
she’d pointed toward the fleeing felon, Emily’s beau hard on his
heels. “After them! That way!”

Anyone else would have demanded an
explanation, but Wynn had called to his horses, expertly maneuvered
them away from the press of traffic, and set off in pursuit. The
wind pressing the fabric back against her, she’d clung to the side
of the carriage as they thundered down the street.

“Faster!” she urged. “No one gets away with
threatening my sister!”

The perfection of the moment tingled along
her skin. Or perhaps it was the night air.

“I’ll get you as close as I can,” he called
over the rattle of tack. “But if I stop, he’ll have time to
escape.”

He slowed just enough to allow her to leap
off, and she landed on the spy and knocked him to the ground. Even
as she gathered herself up, the Bow Street Runner arrived to take
the Frenchman into custody.

“Much obliged, Miss Courdebas,” he said,
touching two fingers to his forehead under his thatch of russet
hair. “You have the makings of a fine Runner.”

Coming from him, one of the youngest members
of that elite police force, she was honored. As he led the man off,
she turned to find the phaeton standing nearby, waiting.

“How can I thank you?” she asked her valiant
driver.

He climbed down from the coach and limped
toward her, and she realized that he was lame.

“Only one way,” he said, removing the top hat
that had miraculously stayed on his head during their wild ride.
“Tell me your name and promise me you’ll receive me when I
call.”

“Wynn Fairfax,” he replied. “Distant cousin
to Lord Darby.” He took her hand, grip firm and sure.

There hadn’t been a day since that he hadn’t
stopped by, if only for a moment.

“So what’s the problem this time?” he asked
now, turning his horse to come parallel to hers as they trotted
down the path. “Another French spy to capture? Jewel thief to
apprehend? Murderous plot to foil?”

She’d told him all about their adventures. He
was a good listener. Very likely the injury to his leg required him
to sit and listen to any number of people. Either that or he found
her voice a sleep tonic.

“Missing art treasures,” she confided. “Just
off the coast of Somerset, in an ancient manor riddled with secret
passages.”

Daphne reined in Hortensia so fast he had to
circle back to her. “Wynn, you’re brilliant! You must come with me
and play my suitor!”

Wynn felt as if a clod of sand had flown up
and hit him in the face.
Play
her suitor? What did she think
he’d been doing the past month?

He would always remember the night Daphne
Courdebas had thrust herself into his life. Since his injury when
his horse had fallen taking a jump at Eton, everyone had treated
him as if he were permanently damaged. They seemed to think his
arms and mind had been shattered along with his left knee. She’d
expected him to be capable, and he’d surpassed his wildest dreams.
His heart had been hers from that second.

His mother, on the other hand, had been
aghast when he’d proclaimed his infatuation.

“Daphne Courdebas?” She’d shuddered as she’d
sat in the perfectly appointed sitting room, not one of her graying
hairs out of place, not so much as a wrinkle on her lavender silk
gown. “She’s a hoyden, forever thrusting herself into public notice
with her wild antics. I would never trust my son to her.”

“Then it’s a very good thing it’s my
decision,” he’d said, earning him looks of surprise and admiration
from his three sisters.

No one argued with his mother, not his
sisters, not the staff, not even the vicar, not since his father
had died eight years ago. Wynn generally went along with her
dictates: no need to raise a fuss and upset her. But where Daphne
Courdebas was concerned, he knew his own mind. He was not likely to
meet another woman of her capabilities, beauty, and drive. Any man
would be proud to stand beside her.

Oh, he knew he’d need his mother’s permission
to wed in England, as he was only eighteen, like Daphne. But there
was always Scotland. He thought Daphne would approve of an
elopement, even though they might scandalize Society for a time.
Amazing how just thinking about her made him ready to brave
anything.

Still, he wasn’t willing to accept her vision
of him as just a friend.

“Why do you need anyone to pretend to be your
suitor?” he asked her now as they rode along the track. “You have
dozens, from what I can see.”

She waved a hand, the gesture wild and free.
“None exclusive. The sporting set seems to chase after every girl
they find interesting. No, it must be you. You’ve come over often
enough that even Mother would believe you are courting me.”