Lucy and the Valentine Verdict 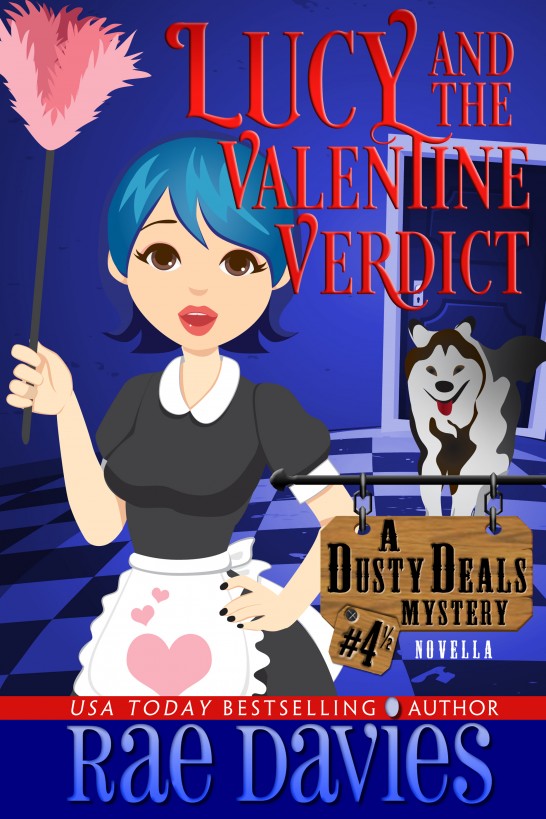 Lucy and the Valentine
Verdict

A Dusty Deals Mystery Novella – 4.5
in the series

This book is set in the real city of Helena, Montana.
However, this is a work of fiction and all people, places of
business, and events are fictional. Any similarity to anyone, thing
or place is purely coincidence.

This book is licensed for your personal enjoyment
only. All rights reserved, including the right to reproduce this
book, or a portion thereof, in any form. This book may not be
resold or uploaded for distribution to others.

If you notice any typos or formatting issues
with this book, the author would appreciate being
notified.

Email her at
[email protected]

Lady York
: Our hostess, a woman
married to a man a number of years her senior with possible side
interests.

Vera Claythorne
: A botanist
by trade who recently retired from a major pharmaceutical
company.

Butler Mandrake Raven
: Butler
employed by Lady York and Sir Cannon for unknown length of time. An
obvious suspect, being the butler after all.

Mr. Blore
: A retired banker who seems
to have a bit of a wandering eye. (Played by Harold, a rancher and
husband of Mrs. Peabody.)

Emily Brent
: A religious woman with a
dislike of alcohol and a husband who just so happened to have died
under suspicious circumstances. Of course, she isn’t telling anyone
about that.

Lucy and the Valentine
Verdict
(a Dusty Deals
Novella)

Love may conquer all eventually, but in my
experience it needed a good kick in the pants to get itself
going.

And that was exactly what I hoped my
Valentine’s weekend at a not-too-far-away resort was going to be
for the love in my life.

Except things never worked out the way I
planned. Never.

“What do you mean a boiler exploded?” I
asked Betty, my part-time employee at my antiques shop, Dusty
Deals.

I’d driven to the store this morning to drop
off my Alaskan malamute, Kiska, with my best friend, Rhonda, who
ran the book store next door and to meet my cowboy detective
boyfriend, Peter Blake.

We’d been planning this Valentine’s weekend
getaway for weeks.

“Just what I said... a boiler... it
exploded.” She enunciated each word.

“What kind of boiler?”

She cocked a brow. “The kind that heats the
building? Here...” She held out that morning’s copy of the
Helena Daily News
and stabbed at it with one ruby red
fingernail. “No one was hurt, but the hotel is going to be closed
for at least a week. They should have called you.”

The reservations weren’t in my name, so if
they had called, I wouldn’t have known it, but that really wasn’t
the issue here.

“Do boilers even still exist?” I asked. “I
thought they went out with steam locomotives.”

Betty lowered the paper to her lap and
stared at me with strained patience.

I got the message. Denial of the facts would
not change said facts.

I huffed out a breath. What to do now?

“There is this...” Betty pulled an envelope
out from under the phone. “Ethel stopped by last night after you
left. She got these tickets, but due to some... commitments...
can’t use them.”

Ethel was a local octogenarian who until
recently was only known for her charitable works. A few weeks
earlier, however, I’d discovered a few other aspects of her
personality and habits. Based on the expression on Betty’s face, I
guessed that Ethel’s commitments had more to do with the
latter.

Still, who was I to judge, or turn down
something that might save my weekend? I took the envelope.

Inside were two tickets and a flyer. All
three were bright pink and emblazoned with the words
Valentine’s
Mystery Weekend. Love hurts, but can it kill?

I grimaced. I certainly hoped not. At least
not in the next few days.

“I don’t know...” The bell over the front
door dinged and Peter walked in. He was looking all masculine and
rugged in his favorite Stetson and Justin ropers. His gaze settled
on my face and star detective that he was, he said, “You
heard.”

I grimaced again. I’d still been hoping that
Betty and the
Daily News
were wrong.

“Yes.” His gaze moved to the fluorescent
slips of paper in my hand. “What do you have there?”

I glanced down, a bit startled to find I was
still holding the items.

Betty jumped in for me. “Tickets to a
mystery weekend in Seeley Lake.”

Peter cocked a brow. “One of those
Clue
things?”

I assumed he meant the game, which was
accurate enough. I read from the flyer, “
Calling suspects, murderers and victims! Play your role
and play detective. You may just be the one to figure out ‘who
dunnit.’
”

Peter held his hand out to Kiska, who
wandered over for a rub behind the ears. “We could go.”

He lifted one shoulder. “Sure, although it
doesn’t really seem fair.”

Suspicion settled in quickly. “What do you
mean?”

He laughed. “Well, I am a detective.”

His hand stilled. “What?”

“Nothing.” I glanced at Betty, who suddenly
seemed busy rearranging a collection of Occupied Japan figures.

I looked back at my boyfriend. “And I’ve
helped solve four murder cases.”

His lips turned up at the side. “You
have.”

His intonation was flat, no mockery that I
could detect, but still...

“This is a murder mystery weekend, just like
you said, like
Clue
, and I’ve read a
lot
more mystery novels than you have.”
Not to mention all the TV shows I watched. Peter might be an expert
at reading lab reports, but this was an entirely different
thing.

“So, you think you can solve the case before
I can?”

I stood up straight. “Of course.”

His eyes glinted. Maybe he was laughing a
little. I studied him, trying to decide, but his mask slipped back
into place.

“Well, then, I guess we’re headed to
Seeley.”

I guessed we were.

I picked up Kiska’s leash and snapped it
onto his collar. “I’ll just take Kiska next door to Rhonda.”

“About that...” Betty stepped out from
behind the counter. “Rhonda called.”

I dropped my chin to my chest. This weekend
was doomed. I just had to hope it wasn’t a portent for Peter’s and
my relationship.

The flu? Rhonda never got sick. She prided
herself on not getting sick. “Really?” I asked.

I looked at Kiska. Thinking my attention
signaled some kind of upcoming reward, he plopped his butt onto the
floor and grinned at me.

I felt lower than Kiska’s behind.

Peter held out his hand. I glanced at him,
unsure what he was doing. He nodded at the flyer and pulled out his
phone.

His cowboy charm worked. Ten minutes later,
he, Kiska and I were loaded in his truck and heading out on the
two-hour drive to Seeley Lake.

The mystery mansion turned out to be an
older two-story log home with small one- or two-room mini cabins
sprinkled around it. The entire compound backed to Seeley Lake,
which was a bit choppy and chilly looking, but still blue and
beautiful.

When we pulled in, there were three other
vehicles visible. Two were parked under a carport, leading me to
believe that they belonged to the owners. The other, a Jeep, newer
and fancier than the one parked in my garage at home, was off to
the right, leaving plenty of room for us.

Peter parked the truck next to the Jeep and
helped Kiska out. I hopped down on my own. By the time I’d made it
to the ground, Peter was already waiting at the front bumper with a
bag tucked under each arm.

He carried our bags to the house’s wide
wooden front porch while Kiska wandered around the truck, sniffing
at the snow. I walked to where I could get an even better view of
the lake and pulled pine-scented air into my lungs.

I lived in the National Forest, so the pine
smell wasn’t all that unique, but the lake... there was nothing as
relaxing as being next to a big body of water like this.

Peter glanced at me and I gave him my
biggest, warmest smile. He walked toward me and pulled me into a
hug. We stood there, staring out over the lake and feeling each
other’s warmth.

This weekend was going to be great.

Ten minutes later, the front door to the
house opened and a couple stepped out. Both were dressed in retro
garb that Betty, my jazz-obsessed employee, would have loved. The
male half was wearing a gray pin-striped suit with black piping on
the vest and a bow tie that I could tell was not of the clip-on
variety. He was also sporting a handle-bar mustache that would have
put Hercule Poirot to shame.

A little western for the theme, but then
this was Montana.

The female half also looked as if she had
stepped out of the pages of an Agatha Christie novel, but if that
had been her inspiration, Miss Marple had not been. She wasn’t old,
nor unassuming. In fact, the beaded ivory dress she wore screamed
money and sophistication, and she looked to be no more than late
thirties, a good twenty years younger than the man.

The pair walked to the end of the porch and
waved for us to join them.

I reluctantly separated myself from Peter
and picked up Kiska’s leash, which he’d been dragging behind him in
the snow.

“Friends of Betty’s?” Peter asked as we
walked.

Honestly, I was impressed that he’d noticed
the couple’s clothing; he was a detective, and the clothing was in
my opinion obviously not of this century, but Peter didn’t tend to
comment on such things too often.

“I wish I’d known,” I replied. “We could
have borrowed something.”

“That is a shame,” he said, raising his
eyebrows in an expression that completely belied his words.

“Well,
I
could have borrowed
something,” I said as we reached the porch. I adjusted my hat,
which coincidentally hid my recently dyed blue hair. I wasn’t
ashamed of my style choice, but in the face of the top-class ivory
bead ensemble, I wasn’t ready to show it off just yet.