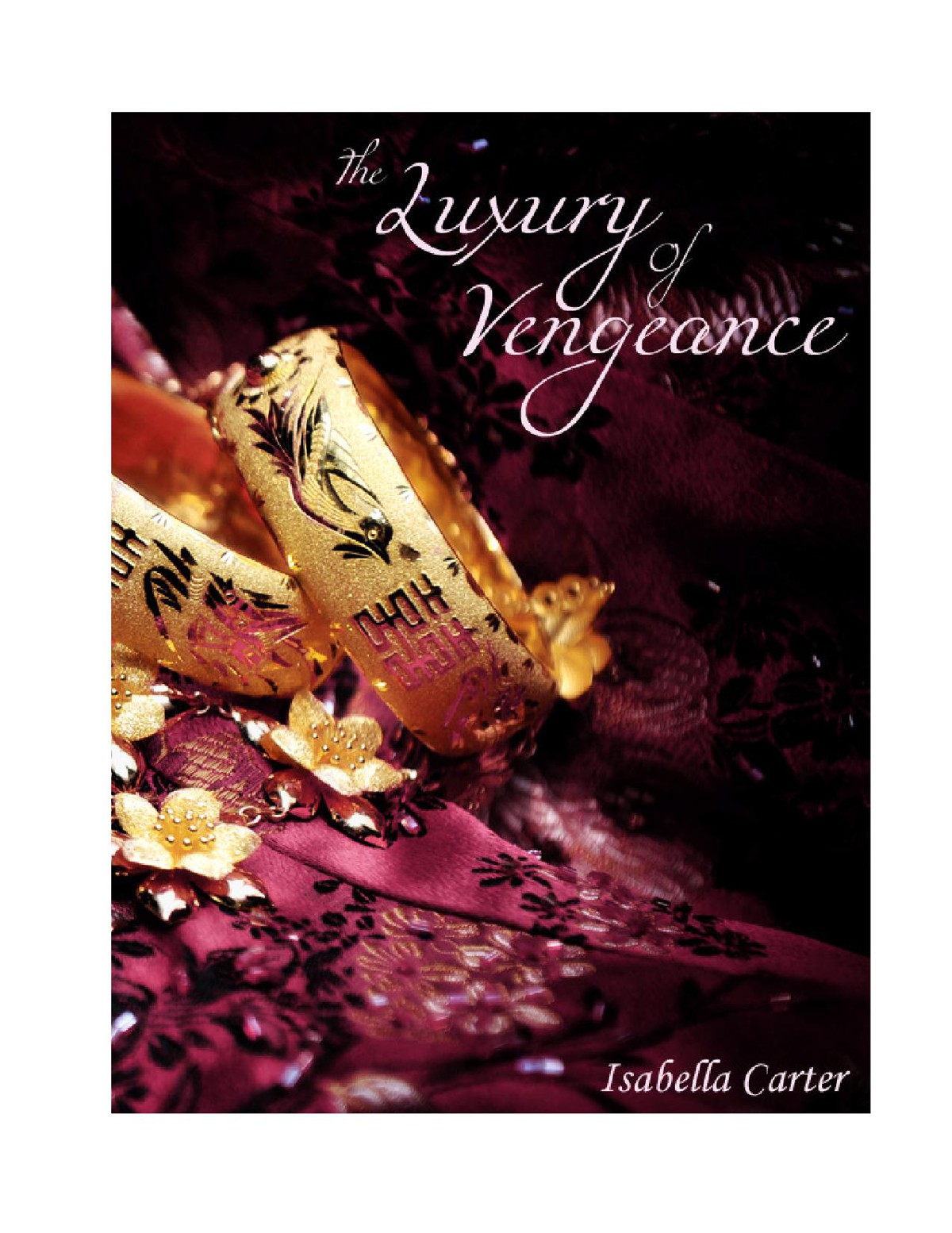 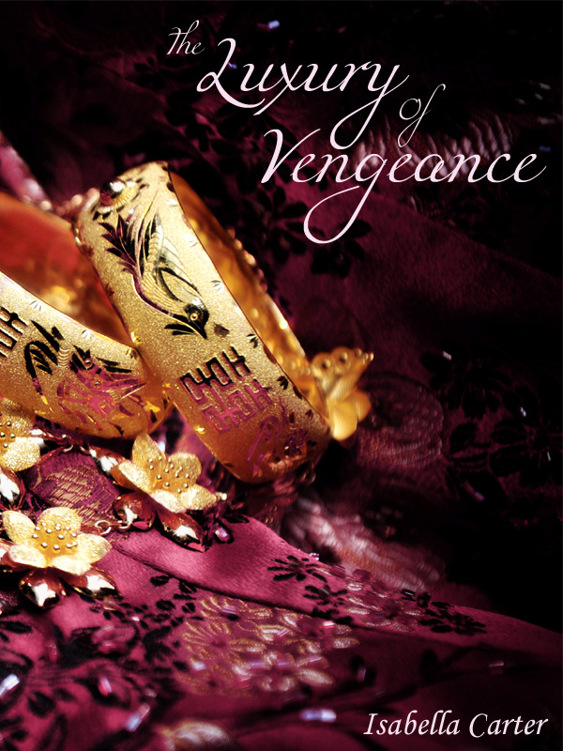 Take no prisoner. Show no mercy. Trust no soul. And vengeance shall be yours. . .

Prince Tuan, into dueling each other for the throne. Hiding a vial of EverBloody, Prince Chien attempts to poison their foods at the banquet. No matter who win the duel tomorrow, both wicked princes will die.

One cut to the skin, and blood will flow relentless.

death. Afterward, he will take her head and the crown that sits upon it. Only then will he have

Only one person stands in his way — General Bao. Prince Chien has skirted around court intrigues,

planned successful assassinations, and demurred himself as a dunce prince. But love is the one thing

Prince Chien never thought he would had to face.

enough to realize love could do exactly the same thing.

The Luxury of Vengeance

The Luxury of Vengeance

A Love is Always Right Story

Once upon a time, he had dreamed of succeeding his father to the Throne of a Thousand

Swords. It was his destiny, his mother had explained. Those dreams had been filled with the idyllic peace that only children could conceive. And then she had died, and Chien had been left only with his dream of

the day he would finally take his aunt's head and return honor to the Throne of a Thousand Swords.

Thirteen long years of planning, of arranging it so that each death would not raise suspicion. Now that

the end was so close, he could scarcely believe it.

And with its being so close, he would have to be more careful than ever. There would be no

end. Coming here to eavesdrop on the Empress was a stupid risk, especially since things were already

falling into place, but sometimes the best way to gather information was to listen in himself.

If they found him in the tiny servant's hallway, there would be no good excuse for his presence.

But he doubted she would even think to check the hallway. Few knew about it. It had been built before

Chien's time as a way for servants to enter quietly and clear food from the Emperor's room. Considering

the small size of the hallway, Chien didn't have to wonder too hard why that tradition had not lasted

The general might have found him there. He seemed to have a sense for appearing wherever

Chien least wanted him. Thankfully, he had left two weeks ago, though he was due back that night.

General Bao had quickly risen in Empress Mai's ranks. Chien had heard the stories of the man before

he'd had the chance to meet him, a soldier who had distinguished himself on the battlefield at a young

age. His superiors had taken great offence when he had been promoted so quickly.

And then he had shown quite a bit of interest in Chien. Intense stares though he seemed

reluctant to actually speak to him. Chien had believed that Bao was keeping a watch on him for his aunt

until one night when he had found himself cornered in his private garden while he trained. Then the

Except of late he had to wonder who had control of that situation. He thought with twin feelings

of annoyance and fondness of the general's goodbye a fortnight ago. The press of bodies had been nice,

the pleasure almost overwhelming, but it was the aftermath that refused to leave Chien's mind. He had

thrown a careless arm over Chien as if it were the most natural thing in the world and held him. After

that, Chien had been hard pressed to convince himself that he still held control of this relationship, that he was only using the general and had not grown attached.

Bao had leaned over until his lips brushed Chien's ears and whispered, "Perhaps if you behave

yourself, I'll bring you a present home."

Chien had been too exhausted to give much more than a huff of laughter, "Something shiny and

colorful I hope." He'd nearly asked for something more. It was difficult to remember that he was

supposed to play the role of the dolt prince, especially around a man who refused to treat him as such.

relationship with Bao. But there was no point in wondering of things that would never be. Bao was not

loyal to him. He had to keep reminding himself of that.

Rather than answer him, Bao's hand caressed a finger up his spine which made Chien squirm

and pull away. His body tried valiantly to react as it always did when Bao touched him, "Please Chien, stay out of trouble."

"When am I ever in trouble?" He couldn't even get his damned body under control. He squirmed

away when Bao began tracing his spine once more and rolled over to glare at him.

Bao did not seem affected by his annoyance however. His expression remained serious as he

stared Chien directly in the eyes. "This is a dangerous game you're playing. Politics are not for the weak."

Bao knew nothing, just enough to make a few small assumptions, but it still made him pull back further

and wrap the blanket around himself as a shield.

"No, it is not." Chien agreed. Politics were not for the weak, which was why he was the only

person who could wade through this and put a stop to his aunt.

Bao stared at him for a long moment, and Chien sensed that it was a test of some sort. He put

the most innocent of expressions onto his face. Bao must have sensed he would not get anything further

and sighed in annoyance as he pulled himself to his feet and began to dress. Chien allowed himself to

enjoy the sight, the roll of tanned skin over tight muscles. It was not until Bao looked back at him that Chien realized that he had a goofy smile on his face.

While Bao secured his weapon, Chien asked lazily, "So where are you headed at any rate?"

Bao frowned at him but answered, "The Xing province."

empire. There was no risk of rebellion there. To his knowledge the governor of that province was

upon them. His mother had come from the Xing province. She'd once told Chien that moving to the

palace had been a different experience entirely.

"Why the Xing province?"

"The Empress is searching for—Why do you want to know?" Bao stopped himself.

"Merely curious. You'll be gone for so long." Bao did not look fooled. Chien couldn't help but

wonder why the Empress would send Bao to Xing? To search for something? Her favorite general? Then

it occurred to him: Mai was searching for the sword of heaven.

It was written in their history that long ago, when Gods walked the earth, so too had the

Dragon. His name had been lost to time, but he had grown fond of humans and their ingenuity. Before

he ascended to heaven, he granted one man the insight that would allow him to bring humanity into

greatness. That man had become the first Emperor and his throne the Throne of a Thousand Swords so

that he might serve as the Dragon's avatar upon earth.

Since then, only the strongest were permitted to sit upon the throne, their worthiness proven

by the blessing of the Dragon in the form of the Sword of Heaven. The last Chien had seen of it, his

mother had taken it to the temple following his father's death. Obviously his aunt believed that his

mother had hidden it near her home.

Bao leaned down and caught Chien's lips in a hard kiss. "I shall see you upon my return."

Chien knew he ought to have said no then, but he'd kept silent as always. The politics he could

handle, but this swirl of feelings for Bao, the way his heart seemed to beat faster every time he saw Bao, the disappointment he felt knowing he would not see Bao for the next couple of weeks, that was

"The Misra province?" His aunt spoke, her voice full of disgust and high enough to pull him from his memories. Misra, a small province in the south, had been among his aunt's first push after she

became Empress for further control of the continent. After eight years of being ruled by a tyrant of a

governor, the citizens of Misra had finally revolted against him and the Empress's rule. Since then, they had established a new system of government. Though Misra had struggled since breaking from the

empire, they had managed to find trade with an island in the south. The Empire had felt the loss of

Misra's bountiful fields, but thus far had not been able to spare the men to retake the province.

"Other provinces are beginning to learn from the example of the Misra province. We have heard

whispers of a revolution."

"Then stop them. Do you truly need me to remind you how you should do your jobs?"

"If it were only that simple Empress." The advisor sounded pained and Chien wished there was a

way he could see their faces as well as hear their voices from his hiding place. Were they frustrated with Isabella Carter | 4

their Empress's lack of understanding in how to handle her people? Would they stay loyal to her or to

someone they thought could stop this mess. "We cannot stop multiple rebellions all at once."

"Why would they rebel? They are a part of the greatest Empire of their time."

"They cry for food, Empress. For homes to shelter their families. The waters last year washed

away many homes and many have not been able to rebuild." The Empire was starving. Mai was so

focused on expanding she had ignored the needs of the people and now they were suffering for it.

"The waters last year ruined many things. It is selfish of them to worry only of their own needs."

If the advisor had an opinion on that thought he did not share it, "Take a contingent out to the Misra province then. Kill how many ever are necessary to bring it back under our control."

"Empress, that may be just a bit extreme—"

"There is nothing too extreme when one's reputation is at stake. Make an example of them.

Other revolutions will not follow. Already we have allowed that ridiculous show of freedom go on for far

"Excellent. And now my minister of War. What objections do you bring?"

"My concerns are simple Empress." The minister's voice was cultured and polite. "If we send soldiers from the palace, it may weaken us at the palace for an attack."

"You think someone would be bold enough to invade my palace?" Mai laughed. "I would

Back to Life by George, Mellie
Ed McBain_87th Precinct 47 by Romance
The Werewolf Whisperer by H. T. Night
The Death and Life of Gabriel Phillips by Stephen Baldwin, Mark Tabb
The Blue Edge of Midnight by Jonathon King
Trouble Magnet by Graham Salisbury
Rock My World by Coulter, Sharisse
Tremor by Winston Graham
Homework by Margot Livesey
The Wellspring by M. Frances Smith