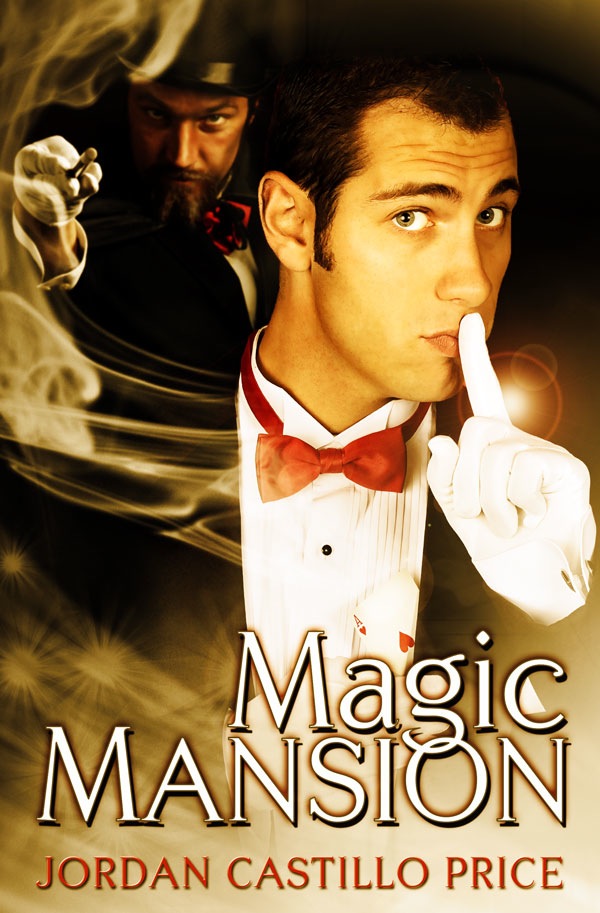 29 Blast from the Past

A Note from Jordan

Magic Mansion. Copyright © 2012 Jordan Castillo Price. All rights reserved. No part of this book may be used or reproduced in any manner whatsoever without written permission except in the case of brief quotations embodied in critical articles and reviews.

This book is a work of fiction. the names, characters, places and incidents are products of the writer’s imagination or have been used fictitiously and are not to be construed as real.

NOTICE: This eBook is licensed to the original purchaser only, and may be stamped with the purchaser’s name, IP address and order number for inventory control purposes.

This e-book file contains sexually explicit scenes and adult language which some may find offensive and which is not appropriate for a young audience. JCP Books e-books are for sale to adults only, as defined by the laws of the country in which you made your purchase. Please store your files wisely, where they cannot be accessed by underaged readers.

Magic Mansion was written serially in the author’s newsletter. At six points during the story, readers were able to vote a character on or off Magic Mansion. If you’re curious about the real voting outcome, you’ll find the results at the end of the story. Links to results are also listed in the ebook’s table of contents.

Magic might not be as popular as it had once been, back in its golden age, but it beat watching soap operas or reading mangled comic books with missing pages, and nipples drawn in ballpoint pen on the costumes of all the lady-characters. And it beat getting your temperature taken, or your blood drawn. And it especially beat swallowing those big, nasty pills.

The audience might not be enthusiastic, but they were there. And that was enough.

They sat in their molded plastic chairs, four children in all. A young boy, badly burned. Something to do with crystal meth and a back door that was nailed shut. His pain was constant. A teenager who’d shattered his foot, and his clavicle, and five bones in his hand on a skateboard. He was too old for magic, or so he thought, but his bones knit faster when he was in its thrall. A boy whose brother had shot him in the leg with the family’s gun, a semi-automatic with its serial numbers filed off, which his mother said they kept for protection. And maybe they did. Their neighborhood hadn’t been fit to live in for years. A girl with pneumonia who’d had too many “uncles.” She was better off in the hospital.

John—stage name, Professor Topaz—had carefully enticed the children to abandon their skepticism. First, he presented himself as a consummate magician: coiffed hair, immaculately groomed goatee, starched shirt, impeccable silk tie, and a spotless black suit—which was beginning to go shiny around the seams, though in the current lighting, it shouldn’t be detectable. He wooed them with a series of simple but rapid tricks so as not to lose their attention, a few solemn words, and the token discovery of a silver dollar behind each of their ears. He let them keep the coins, which cemented their interest. Now they’d been enthralled for the past fifteen minutes with nothing more than three lengths of rope.

All three pieces began the act apparently the same length, and then, as he slid the knots between his agile fingers, they seemed to lengthen and shorten. Another slide, and all three were even once more. It was all a clever manipulation of one long rope and two short stubs, which appeared to be the ends of medium-sized lengths. But in John’s talented hands, the illusion looked quite real.

“Tell me, young lady, is this rope intact?”
My God. Far too many “uncles.”
“Yes? Very good. Excellent. And now, you see….” A loop. His long fingers curled around a second, hidden knot as he slid the other up and down, to the delight of even the jaded teenager.

“Now,” he said gravely. “Observe what happens…when I cut it.” He slipped the knot to the end, brandished a pair of scissors that had
Pediatrics
written in marker on the plastic handle, and snipped the rope. There were gasps, and four pairs of eyes went wide—because they’d seen him cut it, and surely
that
was no sleight of hand.

It wasn’t. But the few inches he’d trimmed off the yard-long length were hardly worth noticing. He palmed the rope stubs, then slid them into his pocket along with the scissors. “You have seen them grow…and shrink…and now, before your very eyes, watch…as three become…one!”

He snapped open the rope with a flourish—and even the teenager laughed. Good progress. The boy wouldn’t be in the hospital long, and if John could reach that part of him that was blighted, and bitter, and hateful, if he could reverse some small portion of the corrosion spreading over the poor child’s spirit, then there was still hope.

The rope-and-ring trick would be perfect, if the boy would be able to hold the rope in both hands, while John “magically” snapped the ring free. Unfortunately, with the shattered hand, he wouldn’t be much of an assistant. Unless the boy with the wounded leg held the other end—yes, even better. A symbolic gesture of cooperation, each holding an end of that rope. It would be the perfect first step out of the darkness and into the light, to have these two boys come together in the spirit of wonder…of magic.

“Observe,” John intoned. “A metal ring. Pass it among yourselves, go ahead, and verify that it is, indeed, solid.”

It made its way back down the line to the burned boy, who returned it solemnly to John. “You have observed the solidity of the ring.” He pressed the ring into the rope and hitched it to the center with a simple slipknot. “You have watched as the three lengths of rope became one. Now, if you will assist me….” He handed the end to the ten-year-old first. Boys of that age still recognized authority on occasion. The boy took his end of the rope gladly.

“And another of you—because it will take the melding of all our minds to sever the bonds of the magical rope—and to heal them again, as strong as if they’ve never been sundered.” It might be heavy-handed on the metaphor, but so what? The burned boy had forgotten his pain, if only for a moment. And the girl with too many “uncles” was smiling. John held out the rope to the teenager. “We need someone with a strong mind. Will you do it?”

The young man wanted to scoff—because to do otherwise would leave him vulnerable. And a dollar and a few rope tricks shouldn’t be enough to buy his trust. Yet, as John looked into his eyes, he saw the boy wanted to believe. He reached for the rope.

“Okay, time for physical therapy.” The nurse’s voice was startling, and all the children flinched and drew back into their shells. The ring and the rope hung in John’s hand, and the magic fled from the props, leaving them looking cheap and common.

The burned boy whined, “I want to see the trick.” His pain was returning already.

John turned toward the nurse and said quietly, “I was told I could perform until three. It’s quarter to.”

She looked at him with hard eyes—she wasn’t quite dead inside, not like so many people were these days, but the hostility emanating from her was plain. “Tonio needs to get to physical therapy, and Jaimie’s grandma is here to visit. C’mon, kids. Quit dilly-dallying. Let’s go.”

Of the four children, the only one old enough to resist the authority of the hard-eyed nurse was the teenager. But he was also in a wheelchair, and when she snapped off the brakes and wheeled him briskly away, he chose to slump back into his state of dejection, rather than engage in a battle he had no chance of winning. John watched as the children filed down the hall to their rooms. The burned boy paused in his doorway and waved.

John lifted his hand solemnly, then turned to go.

“Mister…Topaz?” the ward’s administrator called from his office. So much doubt could be inferred by that simple pause. Yes, Topaz was John’s legal name. His mother had shortened it from Topasna after the second World War, when she’d made the move, with him just a bundle of cells in her womb, from Guam to California. Sometimes John wished she hadn’t changed it. These days, too much showmanship made people suspicious.

He loosened his impeccable silk tie, and turned to the graying man. “Yes?”

“If you wouldn’t mind, step inside and chat with me for a minute….” He was nervous. Why? “We really appreciate what you’ve been doing here….” Ah. It was time to go. Already. “…and you understand, it’s a nice perk to have a little entertainment, but what we’ve really got to focus on here is the medicine.”

Someone had complained. About what? John would never know. But he knew why. Spite. The ill-will that True magicians gathered as they made their ways through the world, like iron filings to a magnet. Even in places where one could attempt to demagnetize oneself from the malice, the envy, the inexplicable loathing, it still caught up with him, and it happened frequently enough that he could read it now in the set of the administrator’s shoulders.
Thank you, but please leave. And don’t make me call security. Because that would only embarrass us both.

“I understand,” John said. He didn’t. But one thing they could never take from him was his ability to be gracious in the face of defeat.

He turned away, head high, and strode with dignity toward the door, but before he reached it, the administrator called out, “Wait.” John’s spirit leapt as if the clouds had opened and a ray of hope now shone upon him. Maybe he would be allowed to return in a few weeks, maybe at some other time of the day, when whoever it was that had hated him for no particular reason, but viscerally enough to complain…whoever didn’t want him there, was not working. If he could see the burned boy, at least. All of them needed to be healed in spirit as well as in body, but if he could help only one, it would be better than nothing.

Revelations by Carrie Lynn Barker
The Sphere Chronicles: A Holding Kate Series Book by Cole, LaDonna
Guardians of the Desert (Children of the Desert) by Wisoker, Leona
Gray Matter Splatter (A Deckard Novel Book 4) by Jack Murphy
The Book of Why by Nicholas Montemarano
IM11 The Wings of the Sphinx (2009) by Andrea Camilleri
True Faith by Sam Lang
Prince of Passion by Jessa Slade
The Great Train Robbery by Michael Crichton
Soul Meaning (A Seventeen Series Novel: An Action Adventure Thriller Book 1) by AD Starrling