Read Maid to Be Mine: A Regency Cinderella Story Online

Maid to Be Mine: A Regency Cinderella Story 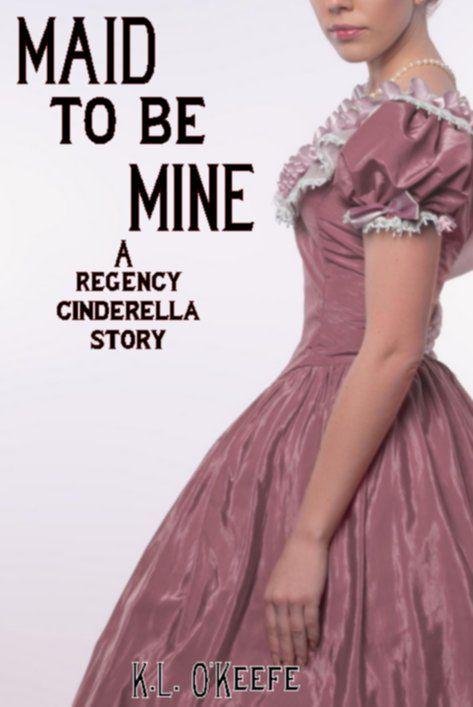 MAID TO BE MINE

“Deuce take it! I think I might be dying this time!”

All the doctors agreed: Lord Montforth was in his twilight hours, but his daughter refused to believe it. “No, Papa! Please don't say that! You can fight it!” She was sitting beside him on the bed, where she took his hand and cradled his clammy fingers against her cheek.

“Ever the optimist, Cynthia,” Lord Montforth said. As soon as she released his hand, he gave his daughter a reassuring pat on the arm. “I hope you never lose that optimism, even in the face of great opposition.” As he spoke, he slid a glance in the direction of his wife, Lady Montforth.

“You're strong, Papa!” Cynthia kept trying to cheer him on, even as his voice grew weak, and his face became wan. “You can fight this fever. I know you can!”

“I feel my consciousness slipping, and yet... I have much to say.” Lord Montforth's steely gaze drifted around the room, over the faces of the four women who surrounded his bedside. There were an overwhelming number of women in his life, for which he felt varying levels of affection. “Edith?”

“Edith...” When Lord Montforth reached for her, she ran forward and took his hand. “Our time together was short,
too
short, but you are near and dear to my heart. Before I leave this world, I want you to know... you were truly my second daughter.”

“And I could not ask for a better father,” Edith said. She cast a somber glance at Cynthia, whose tears overflowed her ivory cheeks.
The poor girl.
While Edith would certainly miss Lord Montforth, her sympathy for Cynthia was her dominant emotion. They were as close as a father and daughter could possibly be, like two peas in a perfectly peerless pod.

“
Watch over my Cynthia,” Lord Montforth weakly requested. “Take care of her. She will need your companionship more than ever.”

“
Of course.” Edith kept her eyes on Cynthia, who was attempting to dry her tears with a handkerchief, but the handkerchief was already sopping wet. “Cynthia is my friend, and we will always be close. Your memory will live on in us, Father.”

When he heard her call him
Father
, Lord Montforth's pale lips were drawn into a smile. Edith released his hand, and he turned his attention to his other stepdaughter, Georgiana. When he realized he had nothing to say to the girl, his smile was replaced with a frown. There wasn't much to like about Georgiana, who was cold, self-centered and spiteful. She was truly her mother's daughter, in every way. “Georgiana?” he finally spoke.

“
Yes, m'lord?” As she studied her stepfather on his deathbed, Georgiana twirled a tendril of dark hair around her finger.

“
Why don't you take your father's hand, my dear?” suggested her mother, Lady Montforth.

“
Um... no.” When Georgiana shook her head, her adorable ringlets whirled in every direction. “He is not
really
my father, Mama. And I do not want to get too close, for fear that I might catch my own death!”

Lord Montforth started wheezing, so Cynthia took his hand instead. As she held his knuckles against her lips, Cynthia glared at her insensitive stepsister.

“
Georgiana...” Lord Montforth repeated again. He had no warm sentiments to leave with the girl, so he simply said, “Take care.”

“
Certainly, my lord,” Georgiana said. “And I hope your death will be a swift one.” When she saw the censure in her mother's eyes, she added, “you know... because... I would not want you to suffer very long.”

“
Jemima?” Lord Montforth addressed his wife, but she did not come forward to take his hand. Her daughter's words about catching death must have gotten to her.

“
Yes, dear? Is there nothing I can do for you? Nothing to ease your pain?” The sympathy in the countess' voice was saccharine and feigned.

“
I am afraid not. However, I have a final request to make. I suppose you could call it my dying wish.”

“
Be kind to my daughter,” Lord Montforth said. “Treat her as your own.”

“
Oh...” The countess' lips tightened as she forced herself to smile. When she made eye contact with Cynthia, she had to summon an inordinate amount of willpower to hide the disgust on her face. Lady Montforth made no secret of her overwhelming jealousy of the girl. “I... I suppose, I...” It was an impossible promise to make. Though she had no intention of keeping the promise, the act of uttering the words was difficult enough.

“
Very well.” Lady Montforth did not dare to look at Cynthia as she said it. “I will treat her as if she were my own daughter. I will. I promise.”

“
Good.” Some of the tension in the dying man's body seemed to melt away, as if his prayers had been answered. “It means so much to me, Jemima, to know that Cynthia will be in good hands.”

“
Papa...” Cynthia whispered. She pulled her father's hand to her face and used it to wipe her tears. “Papa, please. Please stop talking as if your death is a certainty! I cannot bear it!”

“
Get me a parchment and quill,” he requested of Edith, who ran to the nearest desk to retrieve the supplies.

“
What are you writing, Father?” Cynthia asked.

“
I'm writing something for you, child,” he said. Edith slipped the quill into his shaking hand and helped him dip it into the inkwell. “It is something you must never forget.” A bit of ink splattered on his bedsheets as he brought the quill to the parchment.

“
What are you writing?” Cynthia asked again, her curiosity getting the best of her. She tried to sneak of peek of the parchment, but Edith was holding it, and it was beyond her realm of sight.

“
It will be my famous last words,” Lord Montforth said. “Nothing particularly dramatic, but necessary nonetheless.”

Lord Montforth spent every last ounce of his strength on writing the message for his daughter. As soon as he finished scribbling, his eyelids closed, the quill slipped from his hand, and his head sunk deeper into his pillow. Cynthia thought her father had died right then and there, but when she saw his chest rise, she breathed a sigh of relief. For the moment, the earl was still clinging to life.

Edith collected the quill and inkwell, then handed the parchment to her stepsister. When Cynthia read what he wrote, she was overcome with a fresh wave of tears.

“
Mama?” It was Georgiana who spoke.

Cynthia's infuriated, tear-soaked eyes landed on Georgiana. “No, he's not dead! How could you be so insensitive? Do you have any heart at all, Georgiana?!”

“
Of course I have a heart!” Georgiana defended herself. “It's just that... my feet are going numb from standing around so long, and this is dashed boring! What are we accomplishing by standing around and watching an old man die?!”

“
It
is
late, dear,” her mother agreed. “I think it would be permissible if we excused ourselves now.”

“
Thank goodness!” Georgiana exclaimed. Her mother laid a hand on Georgiana's back and escorted her from the room. “This is too depressing, anyway. Why should I subject myself to so much depression?”

When Georgiana's voice disappeared down the hallway, Cynthia and Edith exchanged glances.

“
I am sorry for my sister's behavior,” Edith said.

“
Really, Edith, you need not apologize on her behalf. You and Georgiana are very different people!”

“
True... nevertheless, she shames me.” Edith shook her head in disgust, then she watched Lord Montforth's face, which had gone from pained to peaceful. He was seconds away from death. That fact was obvious to her, but she could not bring herself to quash Cynthia's hope.

“
Are you staying?” Cynthia asked.

“
Of course.” Edith took Lord Montforth's other hand. “I will stay with you until the end, Cynthia.”

“
I know it is true.” When Cynthia looked down at her
I LOVE YOU
note, a lump formed in her throat. “And I'm... afraid. I'm afraid of a life without him.”

The girls stayed at Lord Montforth's side for the remainder of the night, until midnight had come and gone, and the earliest hours of the morning were upon them. When he finally breathed his last, Cynthia knew it right away. She buried her face in her handkerchief and let out a wail of despair.

She would never hear her father's voice again. His hugs were officially a thing of the past.

Cynthia Lockhart was wearing her mourning clothes: a somber black gown and shawl. Her honey blonde hair had been scraped into a severe bun, and her face was sickly pale. Three days had passed since her father's death, and for three terrible nights, she had gotten very little sleep. All she could do was lie awake and think about her father's white lips, and his body growing cold in the ground. She had lost her best friend in the world, and she questioned her heart's ability to recover.

It didn't help that her stepmother was making her life miserable. Jemima, Georgiana and Edith were halfway through breakfast when Cynthia wandered into the dining room with her plate. Edith was wearing black, but Jemima and Georgiana had already moved on. Her stepmother was wearing an emerald green gown that would have been more appropriate for a ball, and her neck was dripping with diamonds. Georgiana was wearing a bright pink frock, and she sneered at Cynthia when she saw her enter the room.

“
Mama...” Georgiana tugged on her mother's sleeve. “Mama, what is
she
doing here?”

“
I do not know, Georgiana.” Jemima tilted her nose toward the ceiling as she spoke, as if it was her intention to look as haughty as possible. “By now, she should know she is not welcome!”

Cynthia sunk into a chair at the furthest end of the table, as far from her stepmother and stepsisters as she could. “I'm here to break my fast, if that is quite all right with you? Unless someone tells me otherwise, this is
my
home too!”

“
Then perhaps we
should
tell you otherwise. Would you like me to have you thrown out?” Jemima retorted.

Across from Jemima, Edith hung her head in shame. She did not approve of their mistreatment of Cynthia, and she would have loved to speak out on her stepsister's behalf, but she did not dare stand against her mother. The widowed Lady Montforth's patience was not to be tested.

“
You wouldn't dare throw me out, would you?!” Cynthia gasped.

“
You should, Mama,” Georgiana supported her mother's suggestion. “This place would be much more peaceful without her!”

Cynthia grabbed her fork and slammed it against the table. It was hardly lady-like behavior, but the outburst seemed necessary. “Father would not want you to treat me like this!”

“
Well, that is too bad, isn't it?” Jemima snickered as she sawed off a piece of her sausage. “He's not around.”

“
That is something
you
would have to figure out, Cynthia,” Jemima said. “But let us not be overdramatic. It is not as if I actually intend to banish you, dear. I am not a heartless woman.”

Mimi by John Newman
Bearing It All (Grizzly Affairs Book 1) by Magenta Phoenix
Heart of Fire: a Moonbound World series (Witches of Whitewood Book 1) by Camryn Rhys
Wolf Blood by N. M. Browne
Convictions by Maureen McKade
Various States of Undress by Laura Simcox
A Beggar at the Gate by Thalassa Ali
Diary of a Maggot by Robert T. Jeschonek
For Those In Peril (Book 2): The Outbreak by Drysdale, Colin M.
Finding Forever by Shriver, Michele