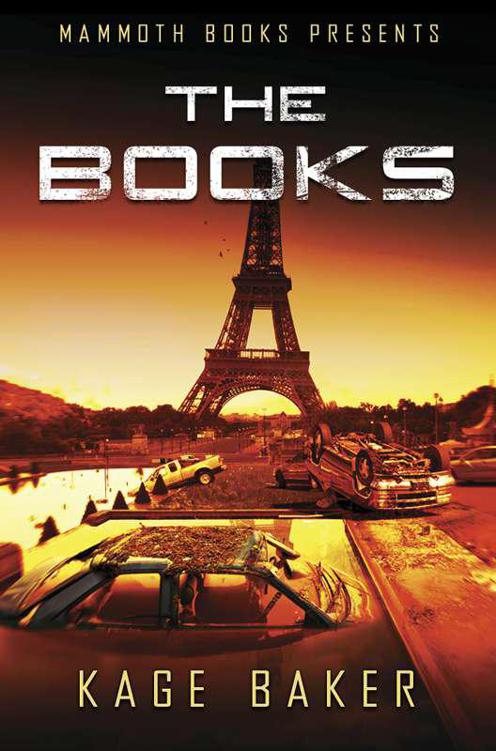 With Introductions by Mike Ashley

Originally published in
The Mammoth Book of Apocalyptic SF
(2010) by Robinson,

The right of Kage Baker to be identified as the author of this work has been asserted by her in accordance with the Copyright, Designs and Patents Act 1988

This is the last story
Kage Baker
completed before her death from cancer on 31 January 2010, aged fifty-seven. She was best known for her time-travel series about the immortal operatives of the Company, which began with her first novel
, In the Garden of Iden
(1997). Her steampunk novel,
Not Less Than Gods
(2010), details some of the secret history of the Company’s Victorian-era predecessor, the Gentlemen’s Speculative Society.
The House of the Stag
(2008) was shortlisted for a World Fantasy Award for Best Novel.

With this story we look at a time beyond the apocalypse with the remnants of society trying to get back to life.

On the same day that I received the proofs for this anthology I learned that Kage Baker had died of cancer, aged fifty-seven. This was her last completed story.

She was best known for her time-travel series about the immortal operatives of the Company, which began with her first novel, In the Garden of Iden (1997). Her steampunk novel, Not Less Than Gods (2010), details some of the secret history of the Company’s Victorian-era predecessor, the Gentlemen’s Speculative Society. The House of the Stag (2008) was shortlisted for a World Fantasy Award for Best Novel.

With this story, written specially for this anthology, we look at a time beyond the apocalypse with the remnants of society trying to get back to life.

W
E USED TO
have to go a lot farther down the coast in those days, before things got easier. People weren’t used to us then.

If you think about it, we must have looked pretty scary when we first made it out to the coast. Thirty trailers full of Show people, pretty desperate and dirty-looking Show people too, after fighting our way across the plains from the place where we’d been camped when it all went down. I don’t remember when it went down, of course; I wasn’t born yet.

The Show used to be an olden-time fair, a teaching thing. We traveled from place to place putting it on so people would learn about olden times, which seems pretty funny now, but back then ... how’s that song go? The one about mankind jumping out into the stars? And everybody thought that was how it was going to be. The aunts and uncles would put on the Show so space-age people wouldn’t forget things like weaving and making candles when they went off into space. That’s what you call irony, I guess.

But afterwards we had to change the Show, because ... well, we couldn’t have the Jousting Arena anymore because we needed the big horses to pull the trailers. And Uncle Buck didn’t make fancy work with dragons with rhinestone eyes on them anymore because, who was there left to buy that kind of stuff? And anyway he was too busy making horseshoes. So all the uncles and aunts got together and worked it out like it is now, where we come into town with the Show and people come to see it and then they let us stay a while because we make stuff they need.

I started out as a baby bundle in one of the stage shows, myself. I don’t remember it, though. I remember later I was in some play with a love story and I just wore a pair of fake wings and ran across the stage naked and shot at the girl with a toy bow and arrow that had glitter on them. And another time I played a dwarf. But I wasn’t a dwarf, we only had the one dwarf and she was a lady – that was Aunt Tammy and she’s dead now. But there was an act with a couple of dwarves dancing and she needed a partner, and I had to wear a black suit and a top hat.

But by then my daddy had got sick and died so my mom was sharing the trailer with Aunt Nera, who made pots and pitchers and stuff, so that meant we were living with her nephew Myko too. People said he went crazy later on but it wasn’t true. He was just messed up. Aunt Nera left the Show for a little while after it all went down, to go and see if her family – they were townies – had made it through okay, only they didn’t, they were all dead but the baby, so she took the baby away with her and found us again. She said Myko was too little to remember but I think he remembered some.

Anyway we grew up together after that, us and Sunny who lived with Aunt Kestrel in their trailer, which was next to ours. Aunt Kestrel was a juggler in the Show and Myko thought that was intense, he wanted to be a kid juggler. So he got Aunt Kestrel to show him how. And Sunny knew how already, she’d been watching her mom juggle since she was born and she could do clubs or balls or the apple-eating trick or anything. Myko decided he and Sunny should be a kid juggling act. I cried until they said I could be in the act too, but then I had to learn how to juggle and boy, was I sorry. I knocked out one of my own front teeth with a club before I learned better. The new one didn’t grow in until I was seven, so I went around looking stupid for three years. But I got good enough to march in the parade and juggle torches.

That was after we auditioned, though. Myko went to Aunt Jeff and whined and he made us costumes for our act. Myko got a black doublet and a toy sword and a mask and I got a buffoon overall with a big spangly ruff. Sunny got a princess costume. We called ourselves the Minitrons. Actually Myko came up with the name. I don’t know what he thought a Minitron was supposed to be but it sounded brilliant. Myko and I were both supposed to be in love with the princess and she couldn’t decide between us so we had to do juggling tricks to win her hand, only she outjuggled us, so then Myko and I had a swordfight to decide things. And I always lost and died of a broken heart but then the princess was sorry and put a paper rose on my chest. Then I jumped up and we took our bows and ran off, because the next act was Uncle Monty and his performing parrots.

But the time I was six we felt like old performers and we swaggered in front of the other kids because we were the only kid act. We’d played it in six towns already. That was the year the aunts and uncles decided to take the trailers as far down the coast as this place on the edge of the big desert. It used to be a big city before it all went down. Even if there weren’t enough people alive there anymore to put on a show for, there might be a lot of old junk we could use.

We made it into town all right without even any shooting. That was kind of amazing, actually, because it turned out nobody lived there but old people, and old people will usually shoot at you if they have guns and these did. The other amazing thing was that the town was
huge
and I mean really huge, I just walked around with my head tilted back staring at these towers that went up and up into the sky. Some of them you couldn’t even see the tops because the fog hid them. And they were all mirrors and glass and arches and domes and scowly faces in stone looking down from way up high.

But all the old people lived in just a few places right along the beach, because the further back you went into the city the more sand was everywhere. The desert was creeping in and taking a little more every year. That was why all the young people had left. There was nowhere to grow any food. The old people stayed because there was still plenty of stuff in jars and cans they had collected from the markets, and anyway they liked it there because it was warm. They told us they didn’t have enough food to share any, though. Uncle Buck told them all we wanted to trade for was the right to go into some of the empty towers and strip out as much of the copper pipes and wires and things as we could take away with us. They thought that was all right; they put their guns down and let us camp then.

But we found out the Show had to be a matinee if we were going to perform for them, because they all went to bed before the time we usually put on the Show. And the fire-eater was really pissed off about that because nobody would be able to see his act much, in broad daylight. It worked out all right, in the end, because the next day was dark and gloomy. You couldn’t see the tops of the towers at all. We actually had to light torches around the edges of the big lot where we put up the stage.

The old people came filing out of their apartment building to the seats we’d set up, and then we had to wait the opening because they decided it was too cold and they all went shuffling back inside and got their coats. Finally the Show started and it went pretty well, considering some of them were blind and had to have their friends explain what was going on in loud voices.

But they liked Aunt Lulu and her little trained dogs and they liked Uncle Manny’s strongman act where he picked up a Volkswagen. We kids knew all the heavy stuff like the engine had been taken out of it, but they didn’t. They applauded Uncle Derry the Mystic Magician, even though the talkers for the blind shouted all through his performance and threw his timing off. He was muttering to himself and rolling a joint as he came through the curtain that marked off backstage.

Love and War by Sian James
The Devil's Prey (The Demon Within) by Jessica Stark
The Phoenix Requiem (The Phoenix Conspiracy Series Book 7) by Richard Sanders
The Dead Place by Stephen Booth
My Friends Are Dead People by Tony Ortiz
Psi Another Day (Psi Fighter Academy) by D.R. Rosensteel
The Mango Opera by Tom Corcoran
Cristal Blue (Sweet Valentine Treat's) by Ayers, Suzy
Do Cool Sh*t by Miki Agrawal
The Golden Circuit (The Smith Chronicles) by Irvine, John K.