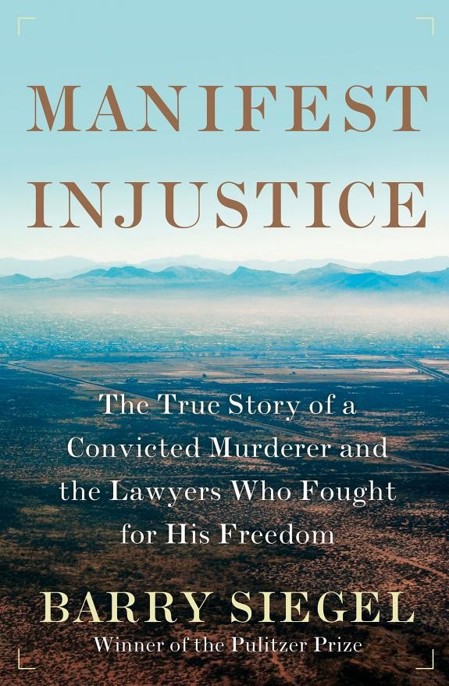 To my father, who showed me the way. With much love and admiration

9.
Return to the Courtroom

12.
A Case Worth Pursuing

In the summer of 2010, a scattering of news accounts drew my attention to the case of William Wayne Macumber, a seventy-five-year-old man who by then had served thirty-five years of a life sentence in Arizona State Prison for a double murder he very possibly did not commit. The case, rife with extraordinary irregularities, had attracted the sustained decade-long involvement of the Arizona Justice Project, one of the first and most respected of the nonprofit groups that now represent victims of manifest injustice throughout the country. By reputation, I knew of the Justice Project’s founding director, Larry Hammond, a celebrated criminal and civil liberties attorney who had just been named winner of the prestigious 2010 Morris Dees Justice Award, given annually to a lawyer “who has devoted his or her career to serving the public interest and pursuing justice, and whose work has brought about positive change in the community, state or nation.” We arranged a phone conference and, on a Saturday morning late that June, talked for two hours. What I heard then, and subsequently discovered from my research, aroused in me an interest to write this book. I asked for Hammond’s cooperation, and he readily agreed.

So began my unique relationship with the Justice Project team and, eventually, Bill Macumber. Without anyone saying so directly, it seemed clear that the Justice Project lawyers and I shared certain values and a mutual respect. Yet I was not on their defense team, and they weren’t my coauthors. As always between journalists and subjects, each party had its own goals and interests; there was a kind of unavoidable, collegial, unspoken maneuvering. The Justice Project associates naturally hoped to shape the narrative in a way favorable to their client, while I wanted access—intimate, authentic access. As a result, we found ourselves in a friendly yet careful kind of dance.

Larry Hammond, by nature impulsive and forthcoming, nonetheless gave careful thought to what he’d reveal, openly telling me when he was “thinking as a lawyer.” His estimable Justice Project colleague Bob Bartels, a distinguished law professor at Arizona State University’s Sandra Day O’Connor College of Law, nicely but frankly informed me that if it were up to him, he wouldn’t share anything. Yet eventually both did share and tell, in a series of enlightening conversations. So did a journalist turned private investigator, Rich Robertson, and a group of extraordinarily committed former law student volunteers, chief among them Karen Killion, Sharon Sargent-Flack and Jen Roach, who regularly rushed to assist the Macumber team long after they’d launched their own careers.

Each time I returned to Arizona, the door swung wider and the piles of documents on the counters of my home office grew higher. Yet the more I researched, the more I came to realize that my trove derived almost entirely from public documents chronicling events set well in the past. What I lacked was a detailed inner look at the Justice Project’s ten-year effort on Macumber’s behalf, started not long after Larry Hammond founded the organization. Good reason existed for this deficiency, of course: The case remained ongoing, with the Justice Project still serving as Macumber’s lawyer. So barriers of confidentiality and attorney-client privilege stood between me and an understanding of the more recent efforts.

All the same, if I were to tell the story I had in mind, I needed both to chronicle the present and reconstruct the past. This I explained to Larry Hammond during a marathon four-day session we held in late February 2011 at his Phoenix law office, four days in which we talked constantly, morning to night, about the legal system, the Justice Project and the Macumber case—except when we stopped on a balmy Saturday afternoon to sneak in three innings of a spring training game between the Dodgers and Giants, baseball being Larry’s other great passion besides social justice. Even there, with Hammond keeping a detailed scorecard, unabashed about his statistical fanaticism, I pressed him about my needs as he explained the fine points of legal confidentiality. I could tell he was at least listening and considering. “Renegade” might be too strong a word for Hammond, but he did seem a lawyer inclined to think outside the box. What’s more, he had his own compelling reasons for me to tell Macumber’s story.

Our visit would prove pivotal. Days later, Hammond sent a message to his Justice Project team members, urging their “full cooperation” with me, even if that involved divulging client confidences and disclosing in detail some of the “awkward reasons” it had taken the project so long to file a petition on Macumber’s behalf. “I think we have a good story to tell,” he explained. Bill Macumber “has been briefed extensively on this question and he is in full accord and wants to waive the privilege.”

With that, the locks came off the file cabinets. Three young, talented Justice Project attorneys, Katie Puzauskas, Lindsay Herf and Sarah Cooper, gathered around, excitedly offering accounts of their recent months out in the field, a “girl team” of lawyer-detectives going to the ground to track down witnesses from long ago. Katie, a vivacious twenty-seven-year-old of chiefly Italian descent; Lindsay, a sunny thirty-year-old college track and swim team jock; Sarah, an intense twenty-four-year-old wunderkind barrister with a strong British accent—together they walked me through their still fresh investigation, spreading their reports on a conference room table, recalling details, setting scenes, building a chronology. The earlier Macumber team volunteers, the former law students Karen Killion, Sharon Sargent-Flack and Jen Roach, provided their accounts as well, along with piles of their notes and reports. Bill Macumber contributed, too, in a major way. After I spent a singular weekend visiting him at his Arizona State Prison home, a full Saturday and Sunday together from 9:00
A.M.
to 4:00
P.M.
each day, he decided to provide me with a thick file of personal letters and his entire four-hundred-page journal, a chronicle spanning his early life, arrest, conviction, and decades behind bars.

In this fashion, my understanding of the Macumber case and the Justice Project’s efforts kept expanding. Inevitably, so did my evolving sense of ambiguity: The more I could see, the more complicated matters appeared. The complexities only deepened when I finally had the chance to meet with Macumber’s ex-wife, Carol Kempfert. This case certainly involved a long list of strikingly dubious elements, as well as a convicted killer whose wit, erudition, calm decency and exemplary conduct (in prison and out) had inspired many to support him. Yet the record also included what seemed to be some quite damaging evidence against Bill Macumber—his own lawyer at trial had warned that the jury might not believe him because, though true, his account did sound “fishy.” So why Larry Hammond’s passion and the Justice Project’s unflagging decade-long commitment? By its nature, the cash-strapped Justice Project, with limited resources and manpower, had to be highly selective. The group’s manifesto assigned to its staff only cases involving innocence or “manifest injustice” (obvious unfairness), and in reality, that alone wasn’t enough: The Justice Project associates had to choose just those few cases where they could have an impact, where they could win. That they’d even selected the Macumber case was telling. That they’d stuck with it for more than a decade spoke volumes.

Larry Hammond, after all, knew from the start how hard it would be to ever convincingly prove Macumber’s innocence. This because they had no DNA evidence—no physical or biological evidence of any sort remained in the Macumber file. DNA exonerations by then had become a familiar story, many of them won by Barry Scheck and Peter Neufeld’s renowned Innocence Project at Yeshiva University in New York. But such outcomes were the exception, since most cases didn’t include DNA, making it far harder to win post-conviction relief—in fact, so hard that Scheck and Neufeld’s Innocence Project wouldn’t touch non-DNA cases. Larry Hammond’s Justice Project did all the time.

The deeper I plunged into the record, the more I wanted to understand the Justice Project’s ceaseless, quixotic campaign to free Bill Macumber.

On June 10, 1998, in the Arizona State Prison at Douglas, an isolated border town in the far southeast corner of Arizona, a fellow inmate handed Bill Macumber an article from that day’s newspaper. Macumber carried it back to what he called his “home”—a small cubicle in the prison’s flat, single-story Mohave Unit. He wasn’t feeling well, as he’d been having trouble getting his heart medication from the prison’s medical staff. He knew one nice lady on the prison staff who treated him like a human being. That helped. But the temperature in Douglas had suddenly dropped by twenty degrees, the nights falling into the low forties, and there’d be no heat for at least another week. Two light blankets and his sluggish circulation made for chilly nights. He stood a lanky and angular six foot seven, so he needed a special bed. It filled most of his ten-by-seven-foot stall, set in a large dorm room with twenty-eight other such cubes, each divided by low partitions. Even in such a crowd, he remained alone, being decades older than the other prisoners.

In his cubicle, he read the article, written by an
Arizona Republic
columnist, Steve Wilson. Its subject, a case just then before the U.S. Supreme Court, involved the suicide of deputy White House counsel Vince Foster. The justices had heard oral argument two days before. Wilson’s local interest: “A controversial decision by the Arizona Supreme Court two decades ago might figure in the outcome.”

Macumber kept reading. Yes, he could see what the reporter meant. At the Supreme Court hearing, an old Arizona murder case indeed had haunted the conversation: his murder case.
Arizona v. Macumber.

He recalled Vince Foster’s suicide. Facing possible scandal, Foster had shot himself in the head. A legal battle had ensued, the independent prosecutor Kenneth Starr trying to get access to notes taken by Foster’s lawyer at their last meeting. Did attorney-client privilege survive the death of a client? That’s what they were arguing at the Supreme Court. The very same issue they’d argued at Macumber’s murder trial.

He read on. How interesting—Justice Sandra Day O’Connor, being from Arizona, knew his case well. At the oral hearing, she’d posed a question to Vince Foster’s lawyer: “Mr. Hamilton, you take the position that there can be no compelled testimony by someone in your circumstance, even if the information would be essential to show that a third person was not guilty of a crime, such as in the Macumber case in Arizona?” Faced with
Macumber
, Hamilton conceded that disclosure of a dead client’s confession might have been appropriate there—but that such a “singular situation” didn’t warrant wholesale overriding of the attorney-client privilege.

Steve Wilson agreed with Hamilton. Macumber’s case, he told his readers, involved a lovers’ lane double homicide. Bill Macumber had been “an unlikely suspect” with “no known motive and no prior record.” What’s more, “someone else admitted to the killings.” Ernest Valenzuela, on trial for another rape and murder, had confessed to his attorney, Thomas O’Toole, now a prominent Maricopa County Superior Court judge. So both the Foster and the Macumber cases involved attorney-client privilege. Yet the two differed. “For the privilege to be breached,” Wilson concluded, “the circumstances should be extremely compelling. They were in 1974 when an Arizona man stood trial for murder. They aren’t in 1998 when Starr is fishing for evidence.”