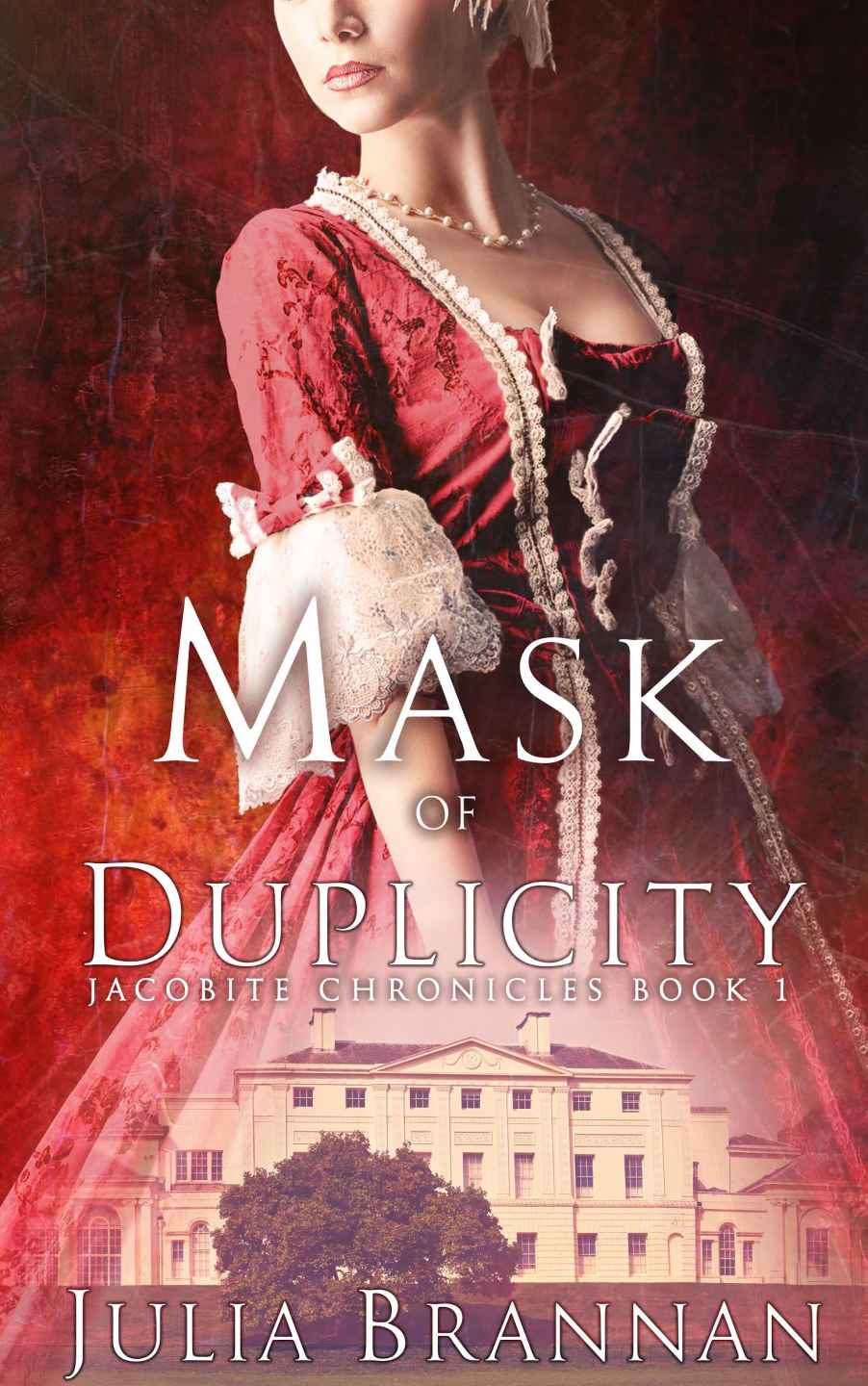 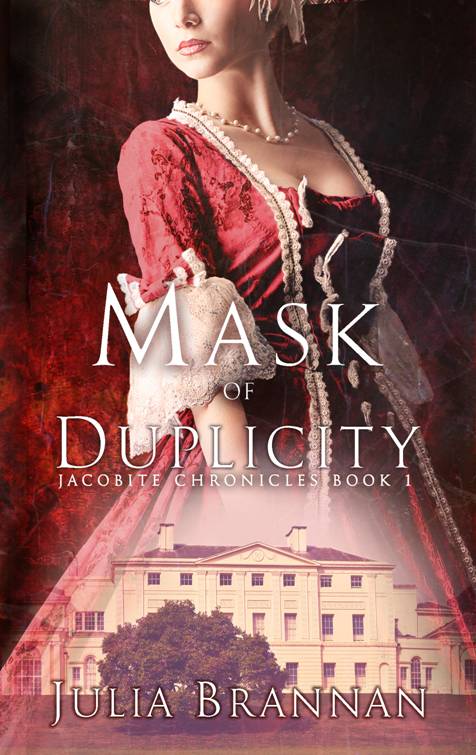 The Jacobite Chronicles, Book One

Julia Brannan has asserted the right to be identified as the author of this work under the Copyright, Designs and Patents Act 1988

This novel is a work of fiction, and except in the case of historical fact, any resemblance to actual persons, living or dead, is purely coincidental.

In memory of Lynette Evans, a wonderful friend and an inspiration. I miss you very much.

First of all, I would like to thank my good friend Mary Brady, who painstakingly read and reread every chapter as I wrote, spending hours on the phone with me, giving me encouragement, and valuable suggestions as to how to improve the book. I owe her an enormous debt of gratitude.

I also want to thank my wonderful and talented partner Jason Gardiner, who put up with me living in the eighteenth century for over two years while I wrote the first four books in the series, and listened to me while I rambled on incessantly about fascinating historical facts that no one else cared about. You are lovely!

Thanks also to all the friends who have read my books and encouraged me to publish them, including Alyson Cairns and Mandy Condon, who has already determined the cast list for the film of the books, and to the other successful authors who have so generously given me their time, advice and encouragement, including Kym Grosso, N M Silber, Ellena Jennings, MJ Harty and Michelle Gent.

Thanks also have to go to the long-suffering staff of Ystradgynlais library, who hunted down obscure research books for me, and put up with my endless requests for strange information.

If I’ve forgotten anyone, please remind me and I will grovel and apologise profusely, and include you in the acknowledgements in my next book!

Although this series starts in 1742 and deals with the Jacobite Rebellion of 1745, the events that culminated in this uprising started a long time before, in 1685, in fact. This was when King Charles II died without leaving an heir, and the throne passed to his Roman Catholic younger brother James, who then became James II of England and Wales, and VII of Scotland. His attempts to promote toleration of Roman Catholics and Presbyterians did not meet with approval from the Anglican establishment, but he was generally tolerated because he was in his 50s, and his daughters, who would succeed him, were committed Protestants. But in 1688 James’ second wife gave birth to a son, also named James, who was christened Roman Catholic. It now seemed certain that Catholics would return to the throne long-term, which was anathema to Protestants.

Consequently James’ daughter Mary and her husband William of Orange were invited to jointly rule in James’ place, and James was deposed, finally leaving for France in 1689. However, many Catholics, Episcopalians and Tory royalists still considered James to be the legitimate monarch.

The first Jacobite rebellion, led by Viscount Dundee in April 1689, routed King William’s force at the Battle of Killikrankie, but unfortunately Dundee himself was killed, leaving the Jacobite forces leaderless, and in May 1690 they suffered a heavy defeat. King William offered all the Highland clans a pardon if they would take an oath of allegiance in front of a magistrate before 1
st
January 1692. Due to the weather and a general reluctance, some clans failed to make it to the places appointed for the oath to be taken, resulting in the infamous Glencoe Massacre of Clan MacDonald in February 1692. By spring all the clans had taken the oath, and it seemed that the Stuart cause was dead.

However, a series of economic and political disasters by William and his government left many people dissatisfied with his reign, and a number of these flocked to the Jacobite cause. In 1707, the Act of Union between Scotland and England, one of the intentions of which was to put an end to hopes of a Stuart restoration to the throne, was deeply unpopular with most Scots, as it delivered no benefits to the majority of the Scottish population.

Following the deaths of William and Mary, Mary’s sister Anne became Queen, dying without leaving an heir in 1714, after which George I of Hanover took the throne. This raised the question of the succession again, and in 1715 a number of Scottish nobles and Tories took up arms against the Hanoverian monarch.

The rebellion was led by the Earl of Mar, but he was not a great military leader and the Jacobite army suffered a series of defeats, finally disbanding completely when six thousand Dutch troops landed in support of Hanover. Following this, the Highlands of Scotland were garrisoned and hundreds of miles of new roads were built, in an attempt to thwart any further risings in favour of the Stuarts.

By the early 1740s, this operation was scaled back when it seemed unlikely that the aging James Stuart, ‘the Old Pretender,’ would spearhead another attempt to take the throne. However, the hopes of those who wanted to dissolve the Union and return the Stuarts to their rightful place were centring not on James, but on his young, handsome and charismatic son Charles Edward Stuart, as yet something of an unknown quantity. 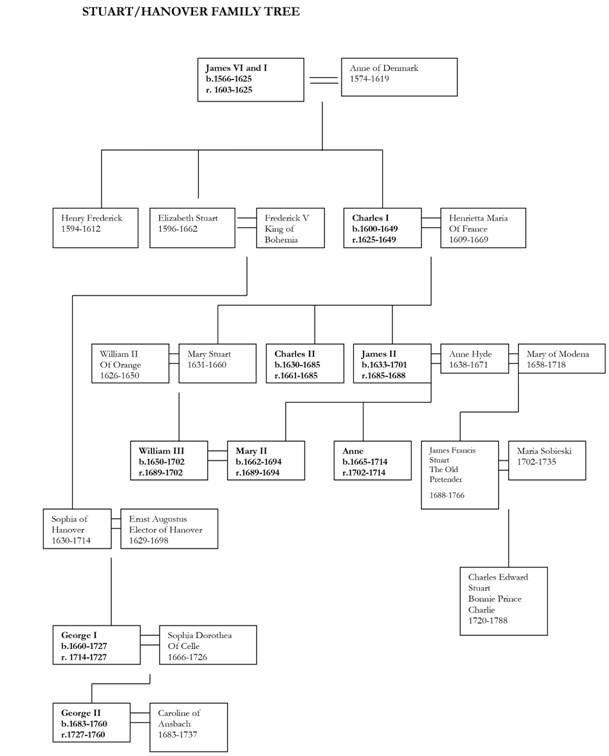 Richard Cunningham, Beth’s brother, a sergeant in the dragoons.

Ben, a young servant to Beth.

Charlotte Stanton, a widow and youngest sister of Lord Edward.

Edwin Harlow, a member of Parliament, and friend of Sir Anthony.

Angus MacGregor, a Highlander, youngest brother of Alex and Duncan.

The young Highlander strolled aimlessly across the plateau, his feet negotiating the uneven terrain automatically, his mind totally occupied with the new life he was about to embark on. He was a tall, well-proportioned young man with the muscular build of the accomplished warrior and the light, graceful walk of one accustomed to moving silently and stealthily through nature, by day or night.

He was not, however, accustomed to the life he was about to embrace, and had no wish to be. In fact, he dreaded it. Idly, he wondered how long he might survive. Not long, probably, when the slightest error could cost him his life. But then, that had always been the case, for him and all who shared his surname. In the past the rewards had never consisted of any more than a full belly and a safe place to sleep for a few days, or weeks. Now, though, although the risk was greater, and the dangers very different to any he had faced in his life up to now, the rewards, if he was successful, would be enormous. Even so, he was finding it extremely difficult to maintain a southerly direction, his heart already yearning for home. The knowledge that unless he was very careful he might never see it again, weighed heavily on him. That was why he had taken the opportunity to be alone for a short time, to say farewell to his beloved country. His brothers understood and had gone on ahead, knowing he would catch them up when he was ready.

Totally absorbed in his own gloomy thoughts, he only became aware of the group of soldiers as they appeared over the ridge ahead of him, whereas if he’d been on full alert as he should have been, he would have heard their approach long before they came within sight. He froze instantly, made a lightning assessment of his options, and then dropped like a stone to the ground. He wriggled along carefully on his belly, coming to rest finally in a waterlogged depression in the soil, surrounded by a thick patch of heather. He was dressed in kilt and plaid in shades of green and brown, which blended well with his surroundings, and his hair was dark, which was a blessing. Quickly he splashed the muddy water over his bare legs in an attempt to camouflage them, and then the men were upon him and he froze in place, aware that his hiding place was far from ideal, and that any more than a cursory examination of the territory would reveal him. Any other passing Highlander would have seen him immediately. But the men who were now within feet of him were not Highlanders, not even Scots, but English redcoat soldiers of King George’s army, unused to the Scottish terrain and the ways of its indigenous people.

Prisoners of War by Steve Yarbrough
Prophecy of the Undead by McGier, Fiona
Artifact by Gigi Pandian
Kepler by John Banville
Eat My Heart Out by Zoe Pilger
Help! A Bear Is Eating Me! by Mykle Hansen
Whites by Norman Rush
A Ticket to Ride by Paula McLain
divorced divas 02 - crimped to death by kappes, tonya
Much Ado About Muffin by Victoria Hamilton