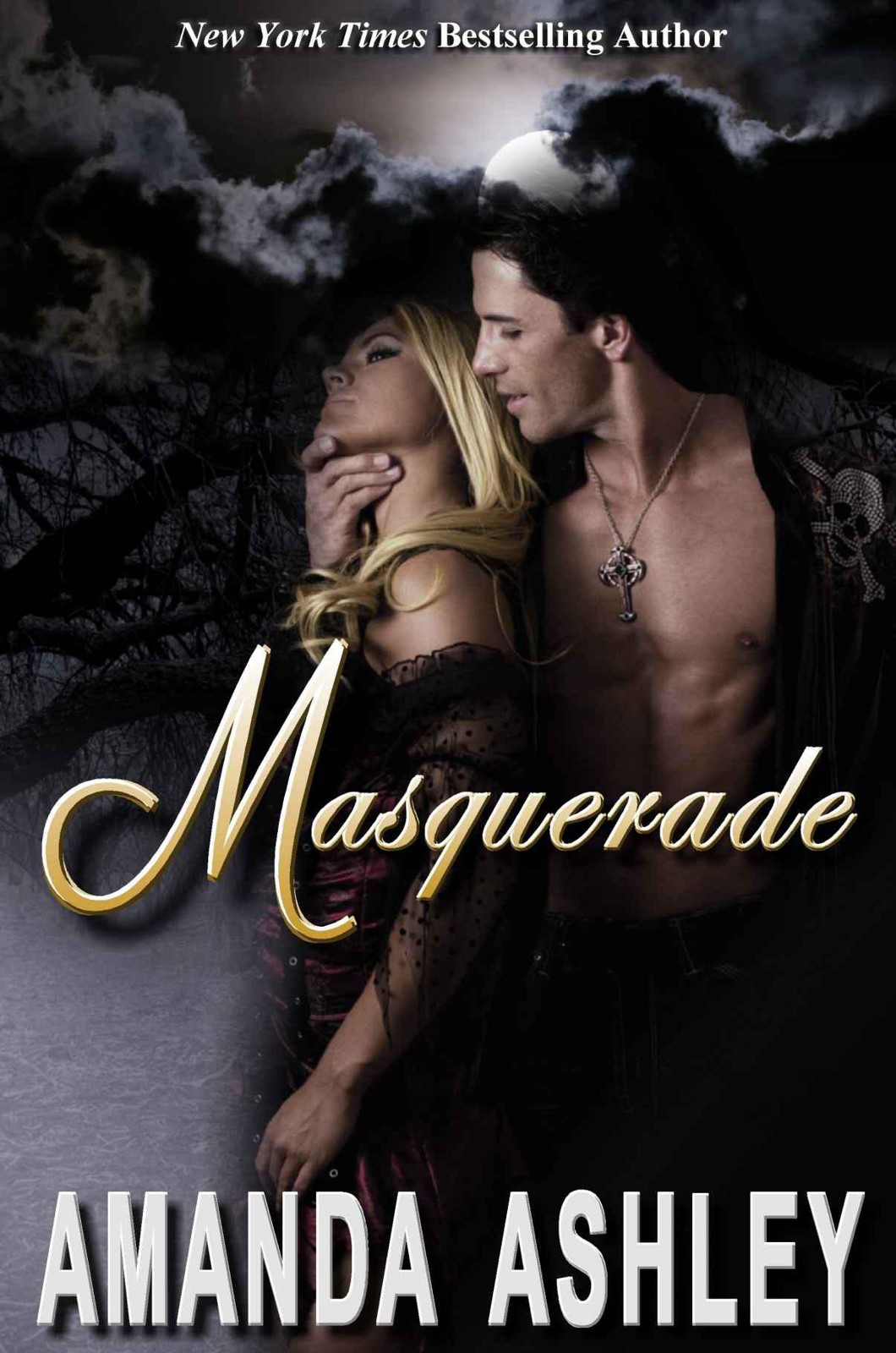 This ebook belongs to vzyl at 64 70 67 72 6f 75 70 forum.
I hereby acknowledge that I have shared this book outside the forum without
permission from the original poster if I earn profit or rewards for providing access to this ebook.
I also accept responsibility for advertising and providing a hyperlink to this forum.

Masquerade
is a work of fiction. Though actual locations may be mentioned, they are used in a fictitious manner and the events and occurrences were invented in the mind and imagination of the author except for the inclusion of actual historical facts. Similarities of characters or names used within to any person – past, present, or future – are coincidental except where actual historical characters are purposely interwoven.

[
Masquerade
was previously released in the anthology
After Twilight
from Leisure Love Spell in 2001. All rights have reverted to the authors.]

Accolades for
Masquerade
and Amanda Ashley

"Jason's tortured love for Leanne, the yearning for a love that can never be, is perfectly captured in this tale that brings more than one tear to the eye and at least one smile." ~ Amanda K. Reviewer TRCC

"...Ms. Ashley's original vampire story gives one a hint of the brilliant stories to come in the future. Her characters come alive, in spite of the novella length of the story. One will feel the agony of Jason's lonely life, along with him, as well as the bittersweet joy he finds in Leanne; and will be cheering them on to a happy ever after."
~ Kelley Hartsell

"Amanda Ashley's vampire heroes are out of this world wonderful. Wow, do they ever give you some sensual chills and thrills. Ms. Ashley is a master storyteller who never disappoints for a second. Ms. Ashley always delivers the stories her fans are clamoring for in grand style."
~ Terrie Figueroa, Romance Reviews Today e-zine

5 Stars ~ "Exciting, but dark paranormal romance...
For three lonely centuries, Jason has felt he has had nothing to live for as he cares for no one. However his dark feelings change quite dramatically when he sees Leanne perform on stage. She feels the same way, but what will happen when she learns the truth about his nocturnal secret?"  ~ Harriet Klausner, Amazon Top Reviewer

the man I was

fell upon my soul

who hides his ugliness

from my lonely prison

let your light drive the bitterness

from my tortured heart

He was a very old vampire, weary of living, weary of coming alive only in the darkness of the night.

For three hundred years he had wandered the unending road of his life alone, his existence maintained at the expense of unwary mortals, until the advent of blood banks made it possible to satisfy his unholy hunger without preying on the lives of the innocent and unsuspecting.

And yet there were times, as now, when the need to savor blood taken from a living, breathing soul was overwhelming. To feel his fangs sink into human flesh, to feel the warm rush of fresh blood flowing over his tongue. It was a high like no other; a craving he fought against, but didn't always win.

Tonight, he stood in the dim shadows outside the Ahmanson, watching groups of happy, well-dressed people exit the theater. He listened to snatches of their conversation as they discussed the play. He had seen the show numerous times; perhaps, he thought wryly, because he could so easily sympathize with the plight of the Phantom of the Opera. Like Sir Andrew Lloyd Webber's tragic hero, he, too, was forced to live in the shadows, cursed to shun the light and warmth of the sun, unable to reveal his true identity.

And so he lurked on the outskirts of mortality, breathing in the fragrance of the warm-blooded creatures who passed him by. They hurried along, laughing and talking, blissfully unaware that a monster was watching. It took no effort at all to drink in the myriad smells of their humanity – a blend of perfume and sweat, shampoo and toothpaste, face powder and deodorant. He sensed their happiness, their sorrows, their deepest fears.

He waited until the crowds had thinned, and then he began to follow one of the numerous street beggars who had been hustling the theater patrons for money and cigarettes. There were hundreds of homeless men roaming the dark streets of the City of Angels. On any given night, you could find a dozen or more panhandlers lingering outside the Ahmanson, hoping to score a few dollars that would enable them to buy a bottle of cheap booze and a few hours of forgetfulness. If only he could drown his own past in a pint of whiskey.

Silent as a shadow, he ghosted up behind his prey.

After tonight, there would be one less beggar haunting Hope Street.

He was there again, standing on the corner of Temple and Grand, his long angular face bathed in the hazy amber glow of the street light.

Leanne felt his hooded gaze move over her as she left the side entrance of the theater and made her way toward the parking lot across the street. Behind her, she could hear the excitement of the waiting crowd build as Davis Gaines, who many considered to be L. A.'s best Phantom, appeared at the stage door. She agreed with his fans. Davis had the most incredibly beautiful, powerful voice she had ever heard. It was easy to see why the people loved him. The role of the Phantom was physically demanding, yet he was always generous with his time, signing programs, answering questions, posing for pictures. It was Leanne's dream to one day be cast in a leading role, to hopefully make her mark upon the world. To have people shouting her name, clamoring for her autograph, a photo.

She was about to unlock her car door when she felt a hand on her shoulder. Startled, she whirled around.

It was the tall dark man she had seen on the corner. Up close, he was taller and more handsome than she had realized. And more forbidding. His face was made up of sharp planes and angles, totally masculine, totally mesmerizing. His hair was black as pitch. Straight as a string, it fell well past his broad shoulders. His eyes were an intense shade of blue, deep and dark.

She stared into those fathomless eyes and had the ridiculous yet inescapable feeling that she had been waiting her whole lifetime for this moment.

"I did not mean to frighten you," he said in a deep resonant voice. He held out a theater program. "I was hoping you might sign this for me."

"Why on earth would you want my autograph?" she exclaimed. "I'm only in the chorus."

"Ah, but you have such a lovely voice."

She laughed softly. "You must have excellent hearing, to be able to pick mine out of all the others."

His smile was devastating. "My hearing is quite good for a man my age."

Leanne's gaze moved over him curiously. She didn't know how old he was, of course, but he didn't look to be much more than twenty-five or twenty-six, thirty at the most.

He offered her a Sharpie, one brow raised in question.

"Who should I make it out to?"

"Blackthorne." She gazed up at him intently. "Why does that name sound so familiar to me?"

She nodded, then took the pen from his hand. "This is my first autograph, you know."

"The first of many, I'm sure." Looking over her shoulder, he read the words aloud as she wrote them. "To Jason, may you always have someone to love, and someone to love you. Leanne"

He felt a catch at his heart. Someone to love...ah, Jolene, forever lost to him. Leanne's resemblance to his first and only love was uncanny. It was that resemblance which sent him to the theater night after night.

He smiled his thanks as she returned the program, his gaze moving over her face, lingering on her lush lower lip before moving to the pulse beating in her throat. She was small, petite, with skin that looked as though it rarely saw the sun. Her hair was the color of sun-kissed earth; her eyes a deep, luminous green fringed with thick dark lashes. She wore a black tee shirt emblazoned with the Phantom logo, a pair of black tights that clung to her shapely legs like a second skin, and sneakers.

Jason clenched his hands at his sides as he fought the urge to draw her into his arms, to touch her lips with his own, to sip the warm, sweet crimson nectar that flowed through her veins.

She frowned up at him as she capped the pen and handed it to him. "Is something wrong?"

"No. I was just wondering if we might go somewhere for a drink."

She knew she should say no. There were a lot of crazy people running around these days, obsessive fans, stalkers and serial killers, and yet there was something in Jason Blackthorne's eyes that made her trust him implicitly.

"I know a little place not far from here," she suggested with a tentative smile.

"I'll follow you in my car," Jason said, somewhat surprised by her ready acceptance of his invitation. Didn't she read the papers? Muggings and rapes and murders were rampant in the city.

A faint grin tugged at his lips as he crossed the parking lot to his own car. Indeed, he mused as he slid behind the steering wheel, she would undoubtedly be far safer with one of the city's low life's than she was with him.

The bar she had suggested was located on a narrow side street. He knew a moment's hesitation as he followed her inside, and then sighed with relief. There were no mirrors in sight.

He led her to a booth in the rear, then slid in beside her. When the waitress came, Leanne ordered a glass of red wine, as did he.

"So," Jason said, leaning back in his seat. "Tell me about yourself."

His gaze moved over her face in a caress as soft as candlelight. "Everything."

"I'm twenty-three," Leanne said, mesmerized by the look in his eyes. "I'm an only child. My parents live in Burbank, but I have a small apartment not far from the theater." She smiled at him, a shy, intimate smile. "Someday I hope to make it to Broadway."

"Have you a boyfriend?"

Did he speak the words aloud, or was her mind playing tricks on her, supplying the words she wished to hear?

He draped one arm along the back of the booth, his hand dangling near her shoulder. "How long have you been with the play?"

"A little over two years."

"I hear it will be closing soon. What will you do then?"

"I'm not sure. I keep hoping it will be extended."

"How long have you been acting?"

"Actually, this is my first role. I've always wanted to be on the stage and I decided, what the heck, why not go for it? So, I tried out for the chorus and they hired me." She propped her elbows on the table and rested her chin on her folded hands. "What do you do?"

"I'm a cop." The lie rolled easily off his lips.

"You're kidding!" He didn't look like any police officer she had ever seen. Dressed in a white shirt, thigh-length black coat, black jeans, and cowboy boots, he looked more like a movie star or a model than a police officer.

Shade Me by Jennifer Brown
Free-Falling by Nicola Moriarty
Wyoming Nights by Gaines, Olivia
Not a Star and Otherwise Pandemonium by Nick Hornby
The Lost Stories by John Flanagan
Kidnap by Lisa Esparza
You Must Remember This by Robert J. Wagner
Anathemas and Admirations by E. M. Cioran
Artful Dodger (Maggie Kean Mis-Adventures) by Davis, Nageeba
The Broken Kingdom by Sarah Chapman