Read Me and Fat Glenda Online

Me and Fat Glenda 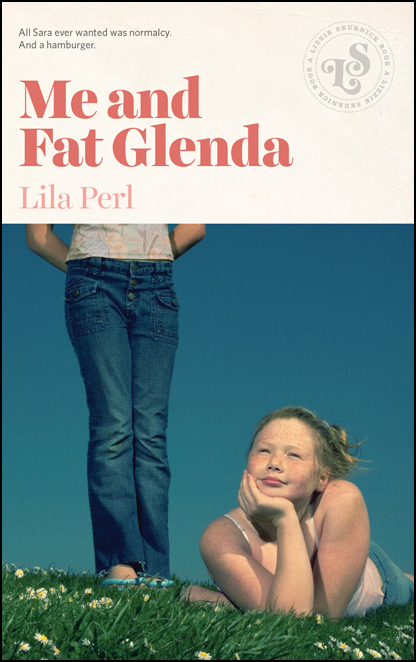 No part of this book may be used or reproduced in any manner without written permission of the publisher.

an imprint of Ig Publishing

In my family I'm always the last person to find out anything. For instance, the way I found out we were moving from California to New York was by overhearing Mrs. Hinkle and Mrs. Brantley talking in the supermarket. In other words, I was eavesdropping. Only those two always talked so loud you didn't have to feel the least bit sneaky about listening.

“Just this morning it was, she told me,” Mrs. Hinkle was saying. “Came and stood in the doorway as I was sweeping the front walk. Yessiree, there she stood in one of those black spider outfits of hers with her hair hanging down like drapery tassels all over her face.

“ âWe'll be vacating at the end of the month, Mrs. Hinkle,' says she. âDrew has a teaching job at a college in New York State.' ”

That was my mother Mrs. Hinkle was talking about. Mom does wear a black leotard most of the time with a short smock or a sleeveless tunic over it made out of some kind of hand-blocked material in bright, contrasty colors. And she does wear her hair long and fringelike,
with chopped-off clumps here and there around her face.

Drew, the man my mother mentioned, he's my father. And, oh, I should explain that Mrs. Hinkle was our landlady. We had been renting out the right-hand side of her double-size frame house on a shady side street not far from the college for about a year and a half now.

I sort of snuggled up against the cat food in Aisle 3 and kept right on listening. Hinkle and Brantley were standing in Aisle 4.

“Well, won't you be happy to see them go?” Mrs. Brantley asked in a loud whisper. “All those parties with the dancing and the blinking lights. They must've ruined your floorboards.”

I got a little mad at that one because the truth was Mrs. Hinkle's floorboards weren't much to begin with. The whole house was so infested with termites that a piece of it seemed to break off nearly every other day. Besides, the house had miceâand Mrs. Hinkle knew it. There were nests of field mice under the porch foundation and under the broken back steps and even behind the wooden boards under the kitchen sink. Not many people in California would be caught living in a dilapidated old house like that anymore.

Mrs. Hinkle, who was probably feeling bad about the house and wondering whom she would ever find to rent it to next, said, “Well, all of these college people, professors
and the like, are a little pixilated these days.”

But Mrs. Bruntley kept right on telling Mrs. Hinkle what was wrong with us Mayberrys. (Meâby the wayâI'm Sara Mayberry.)

“Now you know very well, La Verne, that those Mayberrys are the
most
pixilated you ever had in that house of yours. Him with that beard and those sandals and all that junk piled up and nailed together in the backyard that's supposed to be art or sculpture or heaven-only-knows-what. And that high-school boy of theirs is just as bad. The spitting image of the father except no beardâyet. Of course I do feel just a wee bit sorry for that girl of theirs. She seems normal. Can't think why.”

“Yeah,” Mrs. H. agreed. “Too bad about that. Nice little thing. Not
too
pixilated. Well, I have to be getting on.”

I had to be getting on, too, so I waved good-bye to Hinkle and Bruntley even though they couldn't see me. I did peek around Aisle 4 though just in time to catch a last glimpse of them in their hairnets and their brown walking oxfords and flower-print dresses fading away in the direction of C
ANNED
S
OUPS
and S
OAPS AND
D
ETERGENTS
.

I was shaken up, of course, by the news. But for the moment I had to concentrate on my shopping, too. It was the day for D-burgers and I still didn't know what D was going to stand for.

I guess I should explain about the alphabet-burgers. It was an idea Toby and I had cooked up. (Toby is the “spitting image” high-school boy without the “beardâyet,” and he also happens to be my brother.) Since Inez and Drew (Mom and Pop) had come off their Mexican-food kickâwhich was mostly
guacamole
, a sloshy avocado mash, and refried beansâthey were on a raw-food kick and
that
was really rough. Raw mushrooms, raw cauliflower, raw zucchini, andâworst of allâraw fish.

“After it's taken a bath in lime juice, of course,” Inez had said the first time she tried to get me to taste it. According to my mother the lime juice really “cooked” the fish. It was an old South Seas recipe. But the fish still tasted raw and slimy to me.

So what with all that, and some of the other sickening food kicks they'd been on, I'd gotten hit with doing most of the cooking for Toby and me for a couple of years now. Only what did I know about cooking? Hamburgers. Those were my big specialty. And could they ever get monotonous!

So that was why we invented the alphabet-burger. We had only just started on it the week before. A was apple-burgers. Fried apple slices, sprinkled with sugar and cinnamon, slapped on top of the hamburgers and eaten on toasted buns. Not bad.

Toby liked the apple-burgers so much he thought B should be banana-burgers. But I didn't go for that at all,
so we had bean-burgers. Baked beans where the fried apples had been the time before.

C was easyâcheeseburgers. It was so easy I felt guilty. I figured we would go through the alphabet twice just to make it harder. I wasn't even thinking of letters such as X, Y, and Z at the time.

D was really hard, even the first time around. D, D, D . . . I could see I'd be wandering up and down the aisles of that supermarket for a long, long time.

By the time I got home it was nearly suppertime because I hadn't even begun my supermarket shopping until after school. Mom was already packing her leotards and Pop was in the backyard dismantling the largest and most gruesome of his junk sculptures.

“Some of this metalwork is priceless,” he remarked to Mom when he stomped into the kitchen once between derivetings. “You know, I,” (that was short for Inez) “I'll never be able to find anything even remotely resembling this stuff in New York. Historically speaking, the Eastern seaboard predates the West Coast by over 200 years. Everything worthwhile in the East must have been grabbed up ages ago. Why these iron spikes from the Union Pacific Railroad alone are worth a fortune.”

Needless to say, Pop planned to take all his junk to New York with him for “redesign and reconstruction” and Mom had sweetly assented to this. She wasn't really
in a position to object. She had a few things to lug East herselfâher loom (very handy for weaving rugs and carpets and the like), her dyeing vats and wax-melting pots for hand-blocking and batik-making (which Mrs. Hinkle had once rather witchily referred to as her “cauldrons”), an old harpsichord, an old harp, an old zither, and a few other broken-down musical instruments that she had been collecting over the years and was forever promising to put into “proper playing order.”

“Doesn't matter, though,” Inez remarked breezily when I pointed out how loaded we would be on the trip East. “Think, just think Sara love, of all the space we'll be saving by not taking any cooking pots with us at all.” (She was wrong there. I wasn't going anywhere without my hamburger grill.) “Oh, I tell you baby, eating food in its natural state beats all, from every possible point of view. Just give
that
a think.”

And sure enough, a few minutes later Inez and Drew sank down cross-legged on the living-room floor and ate their dinnerâraw chopped meat sprinkled with raw chopped onions, and, on top of that, two gloppy raw egg yolks!

Meantime, Toby got in from late session at the high school. I started to tell him the news, but he already knew. He'd heard about it late that morning before leaving for schoolâwhich explained why no one had told me. I left for school at eight o'clock, and Drew had only gotten the
letter and phoned Mom at around ten.

I fried the D-burgers, and Toby and I sat down to eat at the kitchen table. Toby kept shaking his head back and forth as he ate. Oh, he liked the D-burgers all right. It was the moving to New York that had him upset.

“Can't do,” Toby said. “Felipe and I discussed it and we're still going on this digging expedition to Mexico this summer.”

“You mean you're not coming East with us?”

“That's right,” Toby said. And I knew from looking into his eyes, which are the darkest possible brown without being actually black, and at the set of his jaw, which is “pronounced” even when he's asleep, that he really meant it.

Even if Toby is my brother, I have to admit that he isn't the least bit handsome. He isn't even good-looking. But he's what I would call really great to look at. He has sort of craggy features with a slightly crooked nose and a slightly crooked mouth, a face that's both rough and tender all at the same time. His hair is wavy and brown, and he wears it kind of low on his forehead and full all around but not really long.

I can tell that girls are crazy about him because all the time I keep getting more and more girlfriends, even some of the stuck-up ones from Pine Ridge Drive who suddenly start developing an interest in looms and zithers and junk sculpture just as an excuse to hang around
our place and keep an eye out for Toby.

“Oh well,” I said resignedly, “I guess you'll get your way. Pop's pretty sympathetic to archaeology and Mexico and all that stuff.”

Toby nodded and I realized he was caring just a little bit about my having to go it alone with Inez and Drew to New York.

“Sorry kid,” he said, grabbing another D-burger. “I'll sure miss your cooking, but I like it fine here in California. In the fall I'll probably move in with Felipe's family and finish out my last year of high school out here instead of making still another switch.”

So that meant Toby would be trading my cooking for Mrs. Gonzaga's. Felipe's mother was a good cook all rightâif you liked Mexican food. Which Toby did. Which I didn't.

Still I couldn't blame Toby. He'd already had enough gypsying around to last anyone else a lifetime. Because he was five years older than I was, Inez and Drew had really lugged him all overâPeru, on a special two-year expedition to try to uncover an ancient Inca secret that it turned out even the ancient Incas didn't have the answer to; Thailand, so Drew could write a doctoral thesis on the hill tribes who smeared lipstick all over their cheeks instead of on their lips and whose children all smoked pipes; Albania, where Drew wanted to study the inheritance customs of the Ghegs and the Tosks.