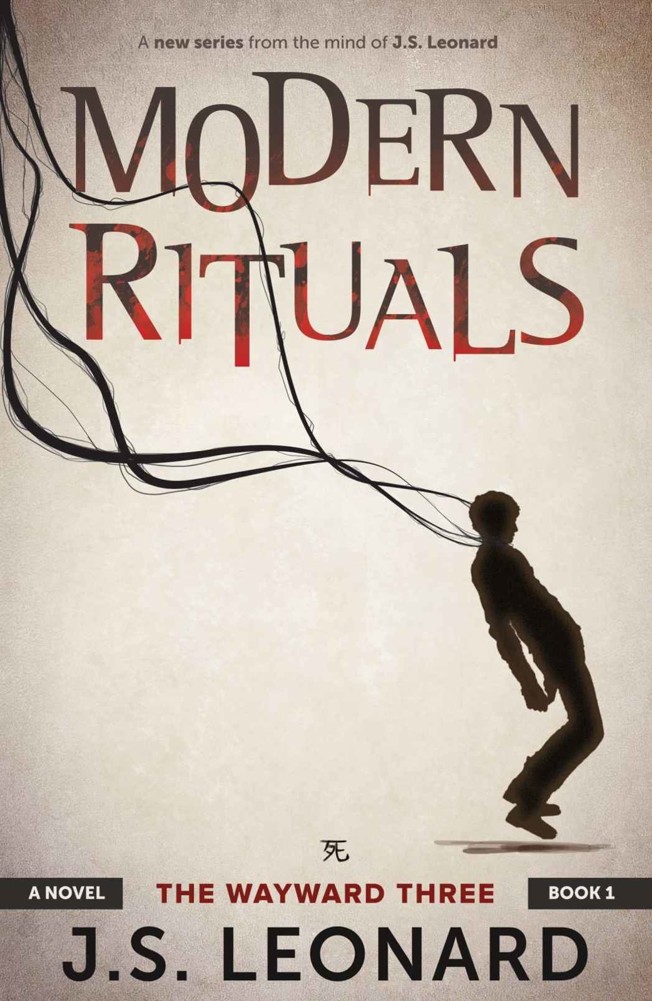 For my wife Jennifer, and my two gremlins,

A thank you to Marti McKenna, my wonderful copy-editor who clarified and breathed life into my words.

She’s but a third of the Editing McKennas.

And thank you to my brave beta-readers: the dynamite-duo Kimberly Martin-McClure and Anthony McClure, the fanciful Mike Pfrimmer and the eagle-eyed Wyn Coulter.

Theo pressed his fingers to his eyes, rubbing them dry, pulling forward tired veins. He slumped over the console, eyes glazed. Much to his chagrin, the “fuggin’ blip” returned, this time sooner than before, somehow hungrier.

A bewildering network of psychoactive sensors sprung to life. The blood hungered. This time it came too soon.

Theo Watson III, a thoroughbred Ivy League specimen, possessed a list of envy-inducing achievements few engineers could rival. Hell, he’d helped ideate, design, build and rebuild the system in front of him at least six times over the past 23 years. He lived it. Breathed it. Knew it better than his children—better than the wife who left him ages ago. The blips nagged at a nerve deep inside his gut. They came at shorter intervals. This meant more death.

Aren’t I preventing the death of millions? Billions?

He would question the ethics of the situation later, just as he had thousands of times before.

Through a masterful stroke of willpower, he forced a tiny smile to his lips and picked up the intercom. In a calm, deliberate, yet still enthusiastic voice, said, “It’s showtime people—let’s make this one count!”

A flurry of activity erupted at once within the concrete and metal corridors surrounding Purgatory 8. To an unassuming bystander it might have appeared someone had yelled “Fire!” Teams of whitecoats migrated from doors to hallways, from hallways to offices, from offices and back to doors, avoiding one another with mystifying precision.

The ritual was underway.

Military personnel stationed themselves before Purgatory 8’s titanium security door. Susan Truff, Theo’s assistant of 16 years, obligatorily jogged her way toward the stationed men, flashed her badge at them without so much as a glance, nodded to Theo and plopped down at her terminal to work.

NASA’s Mission Control has got nothing on us.

Embedded into each workstation, three enormous touch-screen monitors waited to engulf whomever sat in the console’s comfortable, fiber-mesh chair. Each terminal provided ample space from which to control, modify and monitor rituals. Natural gesture interfaces replaced archaic technology such as keyboards, mice and the like. Purgatory 8 contained not one but five of these rows—Theo at the topmost with the other four descending downward like an amphitheater, focused in an arc on HULK.

HULK redefined “big.” The gargantuan monitoring screen had earned the nickname for its building-dwarfing size and the eye-piercing density of its light-emitting diodes. Theo took pride in HULK, as it was unique to Purgatory 8: none of the other sub-stations within Una Corda boasted such an impressive display or any of the other impressive technological doo-dads. This distinction warmed his heart.

More people entered the room. A few suits collected in the rear and observed the activity. A decorated officer took a seat next to Theo: General Ethan Holmes, tactical operations, responsible for mitigating unreasonable outcomes in fringe-risk scenarios. He managed a team of operatives responsible for the unique “just-in-case” needs of Purgatory 8.

Several other scientists and military types buckled into their stations. The room hummed and shimmered like an agitated beehive.

Susan arched back her square shoulders and bit her plump lower lip as she often did at the start of a ritual. She spoke first.

“My readings indicate we have entered phase one, with a polydidactic grouping of…seven? That can’t be right. It’s only been 34 hours since the last consummation—this shouldn’t be higher than two or three. Minimum quota is two. Success rate is teetering—may need more.”

“We can worry about that later. Right now, we need to focus on parts. Tim, is ARS up and ready for some fun?” Theo said with another forced smile.

ARS, or Automated Ritual Scanner, swept the globe for ritual candidates—it made use of more satellites than all the world’s defense systems combined. “Yes sir, scan complete,” Tim said and made three sweeping gestures with his lanky hands, pushing the results of ARS up onto HULK.

“Thanks. Seven it wants, seven it gets. Limit the global part filter to the Americas, Europe and Japan—primarily English-speaking.” Theo knew only so many languages and despised relying on Babelfish software—rituals also had a higher success rate when participants spoke a common language. “Start the sweep,” Theo said.

Tim produced a world map on HULK and filtered it to show the U.S., Europe and Japan. A radar-like sweeping line combed the land masses, revealing small blots at sporadic locations.

“I feel bad for this lot, I really do. We have a unique one today folks. Takes place in a high school, and you know what that means,” Theo said.

The energy in the room heaved a collective sigh, pausing briefly before resuming its frenetic pace. This was indeed a terrible scenario for the parts (or, participants) to find themselves in. Theo hoped for a group of miscreants or some low-born scum—maybe a death row inmate or organ harvester—to be selected as the Seven.

The nagging Theo had felt earlier swelled. Something was amiss—first sweeps rarely produced such a promising batch. This ritual would be different. He couldn’t have told you why he felt that way, but looking back when all was said and done, the signs were obvious. Things were moving along too well.

“Archetypes?” Theo said. “Give me some demographics.”

Alarms blared within Theo’s gut. Such a strange combination. So much potential for disaster. General Holmes’ eyes burrowed their way into the back of Theo’s head. He ignored them.

Fifteen dots on the screen outshone the rest, each a prime ritual candidate.

Theo loathed this moment—he didn’t enjoy any part of a ritual to be honest—but this swung from the bottom rung. He never knew the lot he was going to get. He never knew if a personal friend, or friend of a friend—or anyone within a few degrees of himself—would appear on the participant roster and make the ritual unbearable.

Agents had been dispatched to each of the fifteen locations.

“As of this twelfth of July, Part One has been confirmed: Succubus. Colette Anderson, age twenty-eight, American,” Susan said.

Minutes lingered. So far, so good—Theo recognized none of the names. But a group of miscreants these were not. According to a dossier above each of the participant’s portraits, most appeared to be reasonably well-adjusted members of society.

Their lives now belonged to the “Greater Good.”

And give me friends and foes,

for I harbor ill will to none.

The corner of Broadway and 23
rd
smelled like it sounded—oily, chaotic and appetizing. James crossed 23
rd
and headed toward a farmers market in Madison Square Park. Autumn—a recent arrival to Manhattan just like James—advertised itself by mottling the trees with golden and orange leaves. A passing clock read noon, and after hours of walking, James’ stomach cried.

“No better a way to satisfy the ol’ grumbler than by downing some garden-fresh, organic food,”
he thought.

James didn’t often think this way, but for whatever reason today was different: he was in a spry mood. After perusing tents chock-full of brightly colored foods and overly accommodating vendors, he decided on an array of roasted vegetables and a whole rotisserie chicken from Clean n’ Clucks—free-range raised and antibiotic free.

James handed over the amount accompanied by a tepid smile. Market prices were damn-near extortion. The vendor gave him a recycled cardboard plate, biodegradable utensils, and a steamy, greasy chicken—the sight of that broiled bird should have drawn a crowd, by James’ estimation.

Moth by Daniel Arenson
Witch in the Wind (Bandit Creek Books) by Collins, Brenda M.
We Give a Squid a Wedgie by C. Alexander London
I'm with Stupid by Geoff Herbach
Out of Time (Face the Music Book 3) by Shona Husk
Time Enough for Love by Morgan O'Neill
To Tame A Rebel by Georgina Gentry
Comeback by Catherine Gayle
Wildflower by Kimbrough, Michele
One-Eyed Cat by Paula Fox