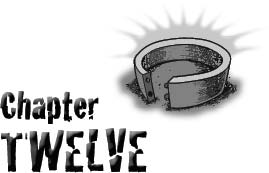 Mort, seated at the controls of the Helix 1550, the silent and almost invisible âcorkscrew' helicopter developed by Mort's father and Leonardo da Vinci almost five hundred years ago, wouldn't have believed it if he hadn't seen it with his own eyes. Hovering above the clearing, Mort watched open-mouthed as Trish led Genghis Khan to a rock and sat him down like a mother dealing with an overgrown toddler.

He'd arrived on the scene just in time to see Smiler attack and too late to stop it even
if he'd been able to. Sir David had been right; his wristband controller hadn't worked from the height he was flying.

This woman was clearly a tougher opponent than he could ever have imagined. Anyone who could disable Smiler and Khan â Khan for the second time that morning â was someone Mort needed to take very seriously indeed.

He leaned back on the joystick and drifted lower.

The first priority was to get Khan inside Festering and back to his normal nasty self. A lollipop-sucking enforcer was completely useless. Satisfied that he was now within shock range, Mort lifted his wrist and tapped a finger to give Khan a gentle reminder â just enough to let him know it was time to return to base.

Khan didn't flinch. He raised the tea Trish had given him and slurped.

Mort looked closely at his wristband. He
tapped it once more, this time a little more firmly. Again there was no reaction from Khan. Mort peered closely at the Mongolian and got a shock almost as bad as the one he'd been trying to give Khan. 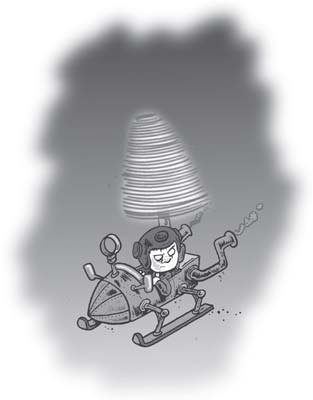 This was bad. Very bad. Years of bossing the Mongolian madman around had depended entirely on Mort's ability to deliver a couple of thousand volts at the touch of a button. Collar-free, Khan was clear to do whatever he wanted. Mort guessed that what Khan most wanted was to take a very close look at Mort's insides.

Mort wasn't immortal. He wasn't indestructible. He felt pain like anyone else. Granted, the DeVere family (and those few families like them) had developed a lot of advanced medicines and surgical techniques to help keep them healthy over the years, but an angry Mongolian warlord would have no trouble ripping out Mort's guts and wearing
them like a feather boa.

Then, shaking his head and thrusting out his jaw, he took the controls of the helicopter and headed back to Festering Hall. Being alive for ten thousand years brought with it a certain amount of confidence, and Mort wasn't quite finished yet.

He might be fooling Trish with that lollipop-sucking and tea-drinking nonsense, but Nigel wasn't so easily convinced. This hairy lump had been trying to kill them! Of that, Nigel had no doubt. The tiger thing had just got in the way.

But Trish didn't see it that way.

âMore?' she said, holding up the thermos.

Khan nodded carefully. He didn't like tea, not one little bit, but he wanted some time to think things through.

The woman he'd been trying to kill was clearly a witch.

How else could you explain a wild animal flinging itself in front of his spear? Only a very powerful witch could command dumb animals to sacrifice themselves like that.

And then she'd put that stick thing in his mouth. Although sweet-tasting, it clearly contained an evil potion which would activate if he harmed her.

Oh yes, the witch was clever, there was no doubt about that.

When he'd finished, Trish pointed in the direction of Festering Hall.

âLet's see if we can find these DeVere children, shall we?' she said briskly.

At the mention of Mort, Khan's ears pricked up and he got to his feet.

In all the excitement he'd almost forgotten about what he was going to do to Mort once he got his hands on him. 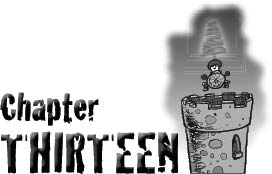 The Helix touched down on the North Tower landing pad situated directly above Mort's bedroom. Before the gyro-spiral had stopped moving, Mort leapt out and raced for the stairs. With a collarless Khan heading towards Festering, and the clock ticking on the eclipse, time â something Mort usually had far too much of â had become suddenly very precious.

Twenty seconds later he was at his desk.

He pressed a switch on the arm of his chair. A section of the wall in front of him
slid back to reveal a bank of high-definition computer monitors. A sleek keyboard and tracking lever emerged from a recess in the desk and Mort booted up the nerve centre of Festering Hall.

He placed a finger on the tracking lever and several surveillance cameras swung round to pick out Khan and the visitors when they came within range. Mort estimated they'd be arriving onscreen within a few minutes.

While he waited, he sent a text to Leonardo to say he might be a little late back at the lab but under no circumstances should he alter the countdown. It was today or bust.

He clicked the send key and switched his attention back to the screens as his eye caught a movement.

They were coming in from the west under the thick cover of the forest. Khan had taken them to the closest point of the main building where they could enter without crossing open
ground. Festering Hall had nothing taller than grass within fifty metres â an ancient, but still very effective security measure.

âSneaky,' said Mort. He zoomed through the leaves and branches on the small group. âBut not sneaky enough.'

Mort leaned back and rested his fingertips on his chin, keen to see what Khan's next move would be.

Khan emerged alone from the trees. Mort's fingers strayed to the keys controlling the roof-mounted laser cannons. One quick blast and Khan would be vaporised.

Mort held his finger above the key and Khan disappeared.

One second he'd been there, the next he wasn't. Mort leaned forward, blinking at the screen. It was impossible, and yet there it was: the man had gone.

Mort's fingers danced across his computer command keys and a detailed digital schematic plan of Festering popped onto the
largest screen. He flicked through layer after layer until he spotted something.

There! It had to be.

Khan was in one of the vents leading from the cavernous basement area below the building. A complex air filtration system like Festering Hall needed somewhere for the recycled air to go. The tubes were quite large enough for the three of them to fit into and led directly into the warren of ventilation pipes and ducting that snaked through Festering like veins through a body.

Mort frowned. Once they got into the ventilation system they could go anywhere. Tracking them would become almost impossible.

Khan came back out of the ventilation shaft and signalled the others to follow.

Enough was enough, decided Mort. Khan was, after all, simply a copy. Almost a toy, really. Completely replaceable. And it would send a clear message to the visitors: stay out.

Mort flipped the safety on the laser cannon and zoned in on the back of Khan's head.

âSorry, hairball,' he said and pressed the trigger.

From its position eighty-five metres away, high on one of Festering Hall's towers, the laser cannon pulsed with a single beam of pure deadly white energy. It arrived at the target a nanosecond after Mort pressed the trigger. There was a blinding flash and then the laser cannon itself exploded. On Mort's screen flashed a message: WEAPON OUT.

Mort stared at the screen in disbelief.

The lasers were so accurate they could slice an apple at eight hundred metres (Mort had tested them only a year ago while Khan had held the fruit in his quivering fingers). And now, somehow, this mob were not only still alive, they had taken out one of his most deadly weapons.

Mort glanced back at the screen.

Trish Molyneux was looking at an object
in her hand and then back up at the smoke rising from the cannon. 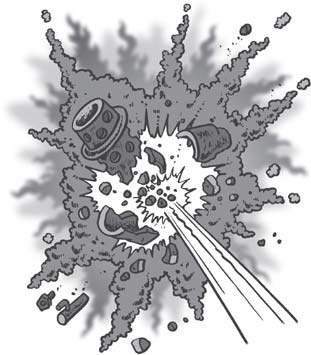 Mort almost choked. The woman had anti-laser technology! As she, Khan and Nigel sprinted into the ventilation shaft, Mort snapped out his mobile and dialled Leonardo once more.

This was getting seriously out of hand. 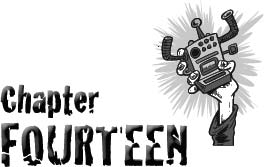 âThere's a hold up,' said Leonardo da Vinci. He snapped the mobile shut and looked at the other two men. âMortimer has a problem. Can't be here until he gets it fixed.'

âWell I guess that's that,' said Oppenheimer. He turned towards the lab window, but not before H.G. noticed his lips twitch with the faint hint of a smile.

âYou know, if I was a suspicious person,' said H.G., âI'd say that you want
Retro
to fail.'

Oppenheimer turned back to face the
other two men and shook his head. âOf course not.' He paused. âBut if Mortimer isn't here, and with the eclipse starting soon â¦' Oppenheimer let the sentence hang in the air.

Da Vinci kicked a wastepaper basket, sending it spinning across the laboratory floor and causing Nemesis the cat to leap to the safety of a nearby metal shelf. âNo!' he yelled. âWe carry on as planned!'

âWhat about the eclipse?' said Oppenheimer. âThat's not going to wait. Not to mention we don't have a pilot! We could be meddling in things we don't understand! Oh we are become death, destroyer of wâ'

âHere we go again,' said H.G. He jabbed Oppenheimer in the chest with a finger. âNow listen, old chap, we've just about had enough of your “destroyer of worlds” nonsense. Pull yourself together, man!' H.G. pointed at
Retro
. âThat is not going to destroy anything, got it?'

âWhat about the flux capacitor?' said Oppenheimer. âWe have no way of knowing
what that will do! We're not even sure what it's capable of!'

Da Vinci put up a hand. âActually,' he said, âthat's not quite true. I know exactly what will happen with the flux capacitor.' 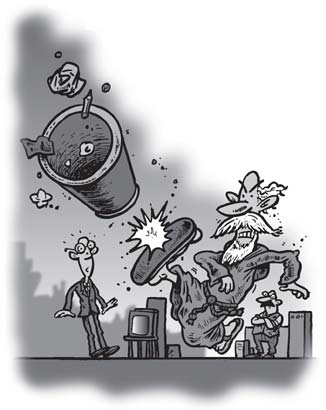 Da Vinci cut the air with the palms of his hand. âNothing. Absolutely nothing.'

âHow can you know that?' said Oppenheimer. âWe haven't even tested it!'

H.G. peered over his glasses at da Vinci. âYes, Leo, how can you know that? I mean, I'm sure you're absolutely right and all that, but how do you know for sure?'

Da Vinci shrugged. âIt's a prop. Made of plastic. From the
Back to the Future
movie.'

H.G. walked towards
Retro
and placed a hand against its smooth steel sides.

âYou mean to tell me that the main part of this machine is nothing more than a â¦ a toy?'

âSi,' said da Vinci. âExcept it's not an important part.' He picked up a complicated-looking piece of machinery from a workbench and held it up. âI told Mort we needed a flux
capacitor for
Retro
to keep him busy while I fixed the main thrusters.'

âTo speed the boy up!' Da Vinci waggled a finger at the window. âThe eclipse is almost here and Mortimer goes too slow!'

âSo the machine's ready?' Oppenheimer looked like he was going to be sick.

Da Vinci nodded. âShe is tip-top ready.' He held out a hand and began counting on his fingers. âWe have thrusters. We have eclipse. We have fuel.'

He broke off and folded his arms, his eyes dark. âWe just need a pilot.'

Super Born: Seduction of Being by kkornell
The Swans of Fifth Avenue by Melanie Benjamin
Stark's Crusade by John G. Hemry
Not Without My Father: One Woman's 444-Mile Walk of the Natchez Trace by Watkins, Andra
Unfallen by Lilith Saintcrow
The Twins by Gary Alan Wassner
Surviving Love by M.S. Brannon
Cat in Glass by Nancy Etchemendy
Silent Cry by Dorothy J. Newton
Runaway Cowboy by T. J. Kline