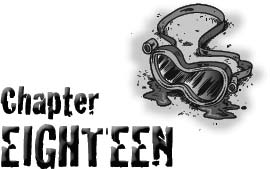 Five minutes after leaving his headquarters, and with the light outside fading fast, a worried Sir David was about twenty metres from the ballroom when the door began to open. A grimy figure emerged.

Sir David just had time to dart behind a thick curtain hanging by the side of a long window before Khan stepped from the ballroom and began walking in his direction. With a jolt, Sir David noticed that Khan was no longer wearing his shock collar.

Sir David put his back to the wall and
waited. He was armed, but a collarless Khan was something to be avoided.

Khan passed by and disappeared round a corner.

Sir David waited another twenty seconds before checking the hallway and moving quickly to the ballroom. Once there, he put his ear against the door.

The naturalist waited patiently. From Alaska to Zimbabwe, he had found that waiting often brought results. Several minutes ticked by.

And then, from inside the ballroom, a noise. Just a faint rustling sound, no more.

Sir David brought the heavy-duty tranquiliser gun up to shoulder height and silently placed the muzzle against the door. He pushed it slowly open and put his head around the frame, the lapels on his safari suit quivering with nervous tension.

At one end of the long room a curtain
moved lazily in the breeze.

Sir David moved into the ballroom and advanced towards the curtain. As he drew closer he could see that what was causing it to move was a gentle breeze blowing from an open ventilation hatch, the door of which swung gently on its hinges.

It didn't take a genius to realise that this was where Khan had come in.

The big question was how far behind Khan was Smiler?

Sir David thumbed the safety off the gun and approached the ventilation shaft. At the entrance he clicked the switch on his LED head torch and inched inside.

On the floor were fresh prints, clear in the dusty surface. Sir David, an expert tracker, could read them as easily as a book.

From the size of one set of prints, Sir David knew one of them was certainly Khan.
The others were those of a man and a woman. Sir David had no idea who they might be or where they were now. Sir David looked down at his wrist. According to his monitor Smiler was heading directly towards him.

He swallowed hard and checked the gun once more.

As he did so he heard a rumbling growl from up ahead and, despite the cool of the ventilation shaft, Sir David felt a single bead of sweat trickle down his forehead.

âOnce more unto the breach, old boy,' he whispered, wiping his brow. He thumbed the safety catch to âoff'.

Ahead there was now dead silence. Sir David's torch beam didn't penetrate for more than twenty paces. He turned it off and pulled on the night-vision goggles. The goggles might make the difference, although Sir David had a nagging feeling that sabre-toothed tigers came fully equipped with built-in night vision.

For a few moments the only sound Sir David could hear was the beating of his heart and he began to realise that, armed or not, a fully grown sabre-tooth would be hard to stop in a confined space like this. It might be better to return with some real back-up.

âNo need to be silly about this,' Sir David murmured. He took out his mobile and dialled Mort.

âIt's about Smiler,' began Sir David as he lowered the barrel of the gun.

And there, quite suddenly, less than half a metre from his face, was the sabre-tooth, his long fangs glowing ghostly green through the night-vision goggles. Sir David's legs almost buckled and the phone dropped from his hand.

Sir David opened his mouth to scream and his finger scrabbled for the trigger of the tranquiliser gun but it was too late. Much too late. 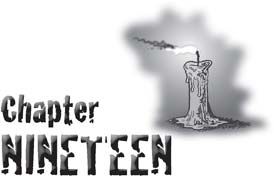 With Trish and Nigel safely stowed in the storage cupboard in the ballroom, Khan headed for a supply store in the basement that Mort had thought was secret.

But Khan had known about the store for years. Not only that, safely stuffed down the front of his grimy Mongolian underwear, he had an electronic universal key card that he'd swiped from Mort's desk. You didn't get to be ruler of the known world just by being big and mean. Sneaky also helped.

As he waited for the lift to the basement,
Khan glanced through a window. He could see the last of the afternoon light fading as the eclipse reached completion.

Khan reached out a thick grimy finger and jabbed the lift button impatiently.

Ten seconds later the lift arrived and Khan reached the store a minute after that. He slid the card into the electronic reader mounted on the wall and the heavy door opened to reveal a long storeroom lined with neatly arranged shelves of weapons and supplies. Everything looked clean and new and expensive because that's exactly what it was.

Khan was inside for less than forty seconds.

From the shelves he selected a German-made hand-held rocket launcher and a set of US Marine-issue night-vision goggles. Ever since he'd found the store, Khan had dreamed about the fun he could have if he ever managed to get rid of his shock collar. He'd been practising with the equipment in the storeroom for years (although until now he'd
never actually risked firing anything). If Khan had anything to do with it, that was going to change today. He slipped the goggles around his beefy neck and left, the door sliding shut behind him.

Taking a set of stairs, Khan dropped down another two levels and turned into another long corridor. He walked fifty metres before stopping outside another steel door, from behind which came a deep electronic hum.

A slow smile spread across the Mongolian's face.

He was standing outside the very heart of Festering Hall: the main generator room that fed the building's always-hungry power needs.

There was, of course, a back-up power supply in a secondary power room, but that would take an hour or more to be primed, and had never been called into action.

What Khan had in mind was going to take much less than an hour.

He again swiped the stolen card through the security reader.

Once inside, his beard vibrated as he stood on a wire-mesh walkway that encircled the massive generator housed in its protective cage. Here the noise was much louder and very much more intense. The generator was concreted into the granite floor, almost two full storeys below where Khan was standing. Nothing short of a nuclear explosion would destroy it.

But this didn't matter to Khan. He wasn't interested in destroying the generator. If things didn't work out as planned he'd be stuck on the island, and he had no intention of being stuck there without electricity for however long it took to fix. How would he watch
American Idol
?

Khan clanked across the grille towards a wall-mounted metal box containing the main circuit board and fuses. He swung open the door and located the âon/off' lever. Khan
placed the night-vision goggles over his eyes and reached out a huge hand. With a grim smile, he pulled the lever to âoff'.

The generator gave a long slow moan like a dying animal and, for the first time in nine hundred years, Festering Hall was plunged into complete darkness. 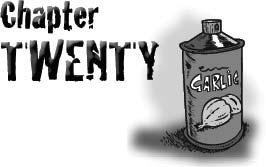 Agnetha lay back, arms folded, on her big black-quilted bed.

She sighed and looked out of the long window. Great gloomy clouds hung low over an ebony sea, leaving a thin ribbon of paler sky on the horizon. As Agnetha watched, that ribbon too began to merge with the darkness as the eclipse enveloped the island. She looked at her watch. Almost three-thirty.

Agnetha had no desire to venture outside. Not with Mort's stupid Smiler roaming around the place. 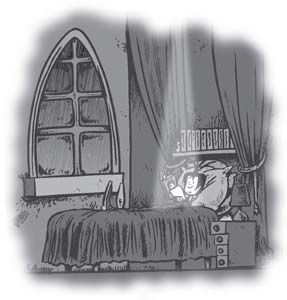 She was sure that both Trish and Nigel would have been eaten by now and was glad that most of her collection were tucked up safe and sound in their compounds, the only exception being H.G.

As far as she was concerned, H.G. could
take his chances in Mort's silly little lab. She could probably make a new copy later if he was unfortunate enough to run into Smiler. There was bound to be some of H.G.'s DNA hanging around somewhere.

âServe him right if he does get eaten, the silly old fool,' Agnetha muttered.

She reached for her book,
First Bite
, the 24th in a series of 66 vampire books by a writer called Ursula Moon. The cover showed a teenage girl, dressed in black, looking at the camera. A thin trickle of blood ran from the side of her mouth. All of Ursula Moon's books featured teenage girls with blood dripping from their mouths.

She was pretty sure that in
First Bite
the heroine, Beula Swill, would finally get to kiss the hero, dashing vampire Josh Blackshade.

Agnetha had been waiting for that kiss for 23 books.

She started reading. Thirty minutes later,
after a great deal of talking and a chase by werewolves through a graveyard, Beula finally kissed Josh. 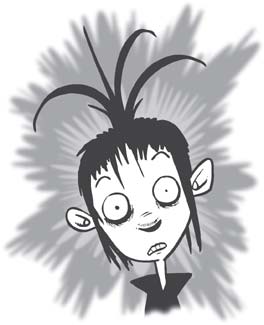 Which was the precise moment when all
the lights went out in Festering Hall.

Festering Hall had never had a power cut before; not once since they'd electrified the compounds in 1164 â¦

A series of images ran through her mind like a flash-frame montage in a movie: the pulsing generator, the central fuse box, the thick snakes of wiring and fibre-optic cables spiralling through Festering; the technical wizardry keeping everything in the compounds running smoothly; keeping the heat and light operating.

Agnetha jumped up and banged her head sharply on her bookshelf. Ignoring the pain, she fumbled frantically in her bedside cabinet for her torch, found it and pressed the switch.

It was time for action.

Agnetha rushed around the room, cramming equipment into a black nylon backpack.

Spare torch batteries, her mobile phone, some rope, chocolate, all the usual stuff.

And a stainless steel Weiner & Missen hand-held multi-shot dart gun loaded with silver ammunition, a baseball bat, a crucifix and an economy-sized can of garlic spray.

Mort wasn't the only one with secrets tucked away in the darkest corners of Festering Hall.

Irish Seduction by Ann B. Harrison
Contagious by Druga, Jacqueline
Cherries in Winter: My Family's Recipe for Hope in Hard Times by Colón, Suzan
Now and Forever--Let's Make Love by Joan Elizabeth Lloyd
The Rules of Backyard Cricket by Jock Serong
Unwelcome Reunions (His Dirty Secret Book 3) by Evelyn Troy
The Summer We Got Free by Mia McKenzie
Cry Wolf by Aurelia T. Evans
Children of the After: Awakening (book 1) by Laszlo, Jeremy
The Immortelles by Gilbert Morris