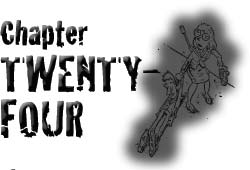 As soon as the lights had gone out, Trish reached down to grab Nigel's collar and haul him as far away from the entrance as possible. As she did so, Smiler exploded into the ballroom and flew over their heads, landing with a crash against the far wall. Then, in rapid succession came a series of blood-curdling roars.

One of the objects Trish had found was a pair of night-vision goggles.

Quickly, she put them on and the ballroom became visible.

She almost wished it hadn't.

The gigantic sabre-tooth was only eight or nine metres away and seemed to be fighting a boy of about ten. So this was one of the children she'd been sent to find. From the look of things she'd arrived just in time to see him being eaten alive. For a split second she considered trying to do something but, in the darkened ballroom with an injured sabre-toothed tiger, she didn't know what she could do, except try to save the unconscious Nigel.

Trish glanced over her shoulder, towards the door.

It was close, maybe fifteen metres, but it may as well have been fifty. Trish saw Mort roll into a corner of the room and lie still as Smiler began to pad slowly from side to side.

She started very slowly, and as silently as possible, to drag Nigel towards the door. It was worth a shot. Nigel slid easily on the smooth surface and, keeping one eye on the sabre-
tooth, Trish began to make good progress.

Which was when Nigel had woken up and asked for his mummy.

Smiler turned and began moving in their direction.

Out of the corner of her eye Trish saw the boy slowly roll out of his position against the wall and start to tiptoe towards the ventilation shaft.

Trish realised she wasn't going to make it to the door.

She took her hand from Nigel's mouth and he let out a long breath. Smiler's ears pricked up but Trish knew she needed both hands free for what she was going to do. With Smiler bearing down on them, Trish hoisted the second object she'd found in the ventilation shaft.

Trish squinted through the night-vision goggles down the barrel. She tightened her finger on the trigger and took aim.

The tranquiliser dart flew past Smiler's head, slicing a hole through his ear. The tiger bellowed in pain, rearing up on his hind legs above her and Nigel. 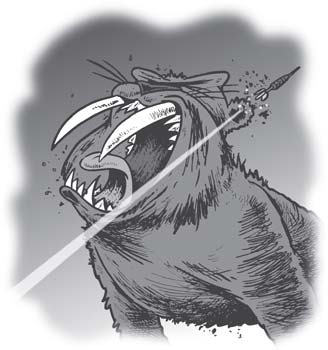 He hung there for what seemed an eternity before turning and running back down the ballroom. At full speed, the animal slammed into a wall and bounced back straight towards the boy, who had almost reached the relative safety of the ventilation shaft.

Trish saw Mortimer DeVere freeze, trying to get a fix on where the animal was.

Before Trish could warn him, Smiler pounced and, this time, no amount of Shaolin moves could help. The sabre-tooth pinned Mort to the floor with his great paws, and bellowed into his face.

So this was how ten thousand years was going to end, thought Mort as Smiler's hot breath filled his nostrils: eaten by his pet cat.

Mort tried to kick Smiler using a Chung-Jao Dancing Crab kick he'd been taught by Grand Sensei Woo, but it was like kicking a rhinoceros.

Then, just as Smiler clamped his jaws around Mort's neck, the darkness was lit by a second brief flash. Smiler grunted, and Mort disappeared under five hundred kilograms of sabre-toothed tiger. 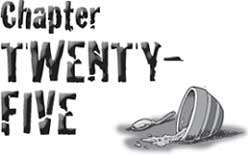 Agnetha pushed open the security door to her secret underground compound and forced herself to breathe.

The fact that the heavy security door was unlocked was a bad sign.

On her way down through the catacombs under Festering, Agnetha had half-hoped that the inhabitants of her compound would still be safely tucked up in bed.

The open door told her a different story. She stepped cautiously through the security door and looked around.

The compound consisted of a vast dome-shaped greenhouse built inside an even larger natural cave. Agnetha had stumbled across it some years ago while exploring the catacombs and knew it would be a perfect place to develop her own secret project.

The roof of the dome was lined with powerful lamps, which (when the power was on) acted as an artificial sun, allowing Agnetha to grow a woodland glade thick with trees and lush green grass. At the centre of the glade stood an old-fashioned country cottage, complete with low-thatched roof and rose garden. A stone path, green with moss, wound its way to the front door.

Agnetha's torch beam sent shadows scurrying across the black leaves as she scanned the trees. She shivered and pushed open the gate, moving slowly along the path, gun in one hand, torch in the other. At the entrance to the cottage she paused and then kicked the door open. As it swung back on
its hinges, she dropped into a forward roll to confuse any possible attacker and came up in the cottage hallway, arms extended, her eyes and gun barrel darting from corner to corner. 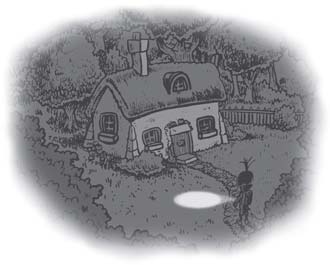 The place looked very much like someone had left in a hurry.

In the kitchen a couple of bowls of grey mush lay half-eaten on the scrubbed pine
table while another was up-ended on the floor. Three wooden chairs of different sizes were pushed back haphazardly from the table.

She was on her way upstairs when she heard the sound. She dropped to one knee and listened carefully, probing the stairway with the torch beam. She slipped the safety off the Weiner & Missen dart gun and held it out in front of her.

Agnetha slowly moved to the landing. There it was again. There was something in one of the bedrooms.

She crept forward, the torch beam like a light saber, her finger coiled around the trigger of the dart gun as she slowly pushed open the first bedroom door. It looked like a child's bedroom. There, fast asleep in bed was a dark shape huddled under the covers, snoring softly. As Agnetha's torch moved across the bed, whoever was in there shifted and Agnetha hurriedly turned the torch off. The shape began softly snoring once more and
Agnetha, hardly daring to breathe, retreated to the landing.

More snoring was coming from the second room.

Agnetha pushed this door open and again looked around.

Two beds this time, set close together, one slightly bigger than the other. A dark shape snoring in the smaller bed. Agnetha crept closer to get a better look at the second, larger, bed. A floorboard creaked under her foot and she stopped.

So did the snoring. And then, to Agnetha's relief, it began once more.

Agnetha craned her neck over the sleeping shape and looked at the larger bed.

Behind her, Agnetha felt the slightest movement in the air and she turned to see an enormous black shape towering over her. Her fingers scrabbled for the torch and switched it on.

Agnetha caught a flash of sharp white teeth bared in fury. It was a bear, a big one, standing on its hind legs. The creature opened its jaws wide and bellowed ferociously. So powerful was the noise in the enclosed space that Agnetha took an automatic step back. A second bear rose from the bed and a third ran into the room. All three roared at Agnetha and she knew she had to do something. 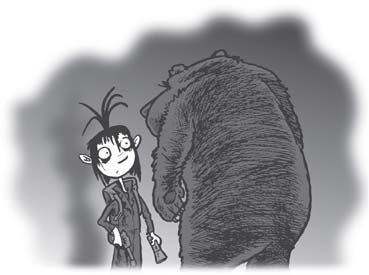 Every atom in Agnetha's body screamed at her to run as the bears attacked. But in the confined space of a cottage bedroom there was nowhere to go. Instead, Agnetha forced herself to channel the adrenalin pumping through her body, dropped calmly into a shooting position and squeezed â not pulled â the trigger of the dart gun three times.

The bears were unconscious before they hit the floor. Agnetha was grateful she'd chosen the full-strength darts. They'd be sleeping for days.

In the sudden silence she stood and lowered the Weiner & Missen to her side, her gun hand trembling slightly.

Three down, one to go.

Agnetha's fourth creation wasn't in the compound. Somewhere out there was the creature who she did not, under any circumstances, want running loose in Festering Hall. 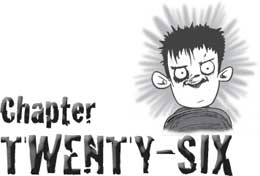 Mort peeled his eyelids open and instantly wished he hadn't.

He felt worse than the time he'd been watching the Battle of Little Big Horn and was run over by a panicky buffalo. Just like then, when he woke up he wasn't entirely sure where he was.

As his vision cleared he saw he was being carried on some sort of stretcher by the Molyneux woman and someone else who Mort couldn't see, but who he assumed was her assistant. The only light came from an
iPhone balanced on Mort's stomach. 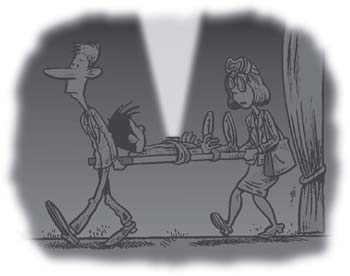 âOh, you're awake then?' said Trish.

âThere's no need for sarcasm, Mortimer,' said Trish. âIt's for your own good.'

Mort hadn't been spoken to like that by anyone (other than Agnetha and she didn't count) for more than two hundred years. He
was also nine thousand, nine hundred and seventy years older than Trish Molyneux.

Trish didn't seem to have heard him.

Mort tried to pull himself upright and found he couldn't. He'd been strapped tightly to a length of what looked like (and indeed, was) a section of the wood panelling that lined the ballroom. A leather belt was fastened around his chest and his knees were held in place by a striped tie.

He couldn't move a muscle.

âKeep still, Mortimer,' said Trish. âYou might have a spinal injury. You were under that horrible animal for a long time. And you'll drop my phone.'

âWhat horrible animal?' asked Mort, and then it came back to him in a rush. The ballroom fight with Smiler. Him being pinned down. The flash of light and then â¦ nothing.

âThe heavy animal,' said Nigel. âThe very heavy and very smelly animal. I'm sure I've
done something to my back lifting him off.'

âLifting?' said Mort. âYou wouldn't have been able to lift Smiler. He weighs too much.'

âWe sort of just dragged him a bit,' said Nigel. âAnd Trish rigged up a lever. It was enough so we could slide you out. A good job too â you were turning a funny colour under there.'

Mort frowned. There was something in Nigel's story he didn't understand.

âWhat happened to Smiler â to the sabre-tooth?' asked Mort.

âOf course not,' said Trish. âI found the rifle in that tunnel.'

Trish nodded. âYes, we saved your life,
Mortimer. But you don't have to thank us right now. You can do it when we get back to the mainland.'

Trish smiled. âOf course. You need to be checked by a proper doctor. And where on earth are your parents? It is totally unacceptable to leave children on this island. There are wild animals running around, for heaven's sake. And I know your babysitter means well, but quite honestly, he probably doesn't have his certification!'

âBabysitter?' Did she mean Khan? And speaking of Khan, where was the old devil? With Mort strapped up like a Christmas turkey, Khan would have no trouble killing him if he found him like this.

Not to mention what Smiler would do once he woke up.

âWhere are we going?' asked Mort.

Trish glanced over her shoulder.

âI was hoping you'd tell us that,' she said. âI
don't think we want to be around when that beast wakes up, do we?'

Mort stayed quiet for a moment. Temporarily, he and Trish were on the same side.

âThe library,' said Mort. He nodded towards a hallway, branching off to the left. âThere's a phone there you can use and the door's pretty strong.'

Trish looked at him suspiciously but said nothing.

Mort was telling the truth. There was a phone in the library. And it did have a strong door. But there was another, more important reason Mort wanted to go to the library.