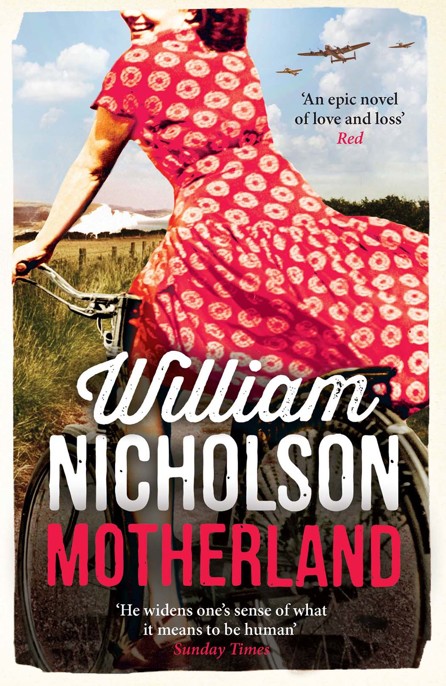 The moral right of William Nicholson to be identified as the author of this work has been asserted in accordance with the Copyright, Designs and Patents Act, 1988.

This book is a work of fiction. Names, characters, businesses, organizations, places and events are either the product of the authors’ imagination or are used fictitiously. Any resemblance to actual persons, living or dead, events or locales is entirely coincidental.

‘His particular gift is to take you inside the contemporary mind,
tracing out trains of thought with astonishing agility,
sensitivity and honesty’
Spectator

‘Terrific scenes . . . the wartime disaster that was the
raid on Dieppe is grippingly rendered’
Observer

‘A profound and moving novel; a tender and compassionate
meditation on love and God and duty and how to be good’
Guardian

‘I love William Nicholson’s simple, intense style. One to get lost in’
Red Magazine

‘Writing of the highest calibre . . . a novel of empathy and
insight into the human mind and heart both a poignant, affecting
love story and a superb work of fiction’
Good Book Guide

William Nicholson’s plays include
Shadowlands
and
Life
Story
, both of which won the BAFTA Best Television Drama
award of their year. He co-wrote the script for the film
Gladiator
, and, more recently, he has scripted
Les Miserables
and
Mandela
. He is married to the writer Virginia Nicholson
and they have three children. William Nicholson lives in
East Sussex.

Our parents have loved before us, and their parents before them. For all we know we inherit our ways of loving along with the colour of our eyes. The joys we feel have been felt before; the mistakes we make have been made before. We carry within us the hopes and fears of the generations that have formed us. This is the unknown motherland from which we are always escaping, and to which we will always, helplessly, be true.

Alice Dickinson sits in the back of the Peugeot, though she would prefer to sit in the front, watching the orchards of Normandy roll by. The driver, a heavy middle-aged man with sad eyes, was waiting at the ferry port holding a sign displaying her name. Her clumsy prep-school French was met with incomprehension. Now he sits stooped over the wheel, one finger tapping out some inner rhythm, brooding on some secret unhappiness. She has no idea of his role. He could be an employee, he could be a member of the family. He’s driving her to the grandmother she has never met, whose name is Pamela Avenell, who didn’t know she existed until ten days ago.

The car turns off the main road onto a smaller road that runs along the east bank of the Varenne. Now the streets of steep-roofed houses give way to stands of mature beech trees, their broad leaves dusty in the mid-August sun. The late hot summer disturbs Alice. This is the weather for lying in long grass beside your lover, not the season for ending an affair.

You lead the life you choose to lead. It should be simple but it’s not. Her own mother’s love life, for example. She was just the age Alice is now, twenty-three, when she had an affair with a man who didn’t love her, or not enough to want her baby. ‘Get an abortion,’ he told her. ‘I’ll pay.’

My father, Guy Caulder, the bastard. And me, the not-abortion. The genuine bastard, to be precise.

The strange thing is she doesn’t hate her father. For some time she thought she despised him, which is different. Guy is handsome, selfish, shameless. He has played no part in her life: not a secret, but not a real person, either. An idea, a few anecdotes, and a genetic legacy.

That’s what hooks you in the end. That’s what reels you in. One day you wake up thinking: half of me comes from him. What if I take after him after all? That’s when you start to want to know more.

‘Why are you such a bastard, Guy?’

She asks the question without rancour, and he takes no offence. He’s buying her lunch in one of the restaurants in Charlotte Street he favours; this one is called Mennula, smart Sicilian.

Of course. Blame the mother. The father can fuck off and no one blinks, but the all-nurturing mother must never stop giving. Give birth, give suck, give unconditional love.

So back it goes, another generation.

Alice has seen so little of Guy in her life that she knows nothing at all about his family. Now she has started to want to know.

‘Why didn’t your mother want you?’

I come from a long line of mistakes. Thanks for that.

‘Is she still alive?’

‘God, yes. Very much so. She’s only just seventy, not that you’d know it. Still a very good-looking woman. Still getting her own way. Mind you, I haven’t actually seen her for years now.’

‘It works out better for both of us that way.’

More than this he will not say.

This story of a chain of unsuccessful marriages haunts Alice. She tells Guy she wants to meet this grandmother she’s never known, who
gets her own way
.

Guy says, ‘She has no idea you even exist.’

He has to think about that one. But of course he has no real choice.

The Peugeot has no air-conditioning, but the sad-eyed driver has his window fully open, and the speed-wind ruffles Alice’s hair. She has dressed with care for this trip, wanting to appear smart but not over-eager to impress. She’s wearing fashionably tight jeans and an off-white linen jacket. Her modest luggage is a canvas tote bag printed with a Caillebotte painting of Paris on a rainy day. She has a notion that Pamela Avenell is stylish.

The beech trees screen the road on both sides now. They pass a road sign pointing to the right, to St-Hellier and Cressy. The driver half-turns towards her.

We plunge into the forest.

The beech trees are spaced well apart from each other, but they recede as far as the eye can see. The columns of light and shade form shifting avenues that appear and disappear as they pass. Why would anyone choose to live in a forest?

But now the trees are retreating, and the bright afternoon sunlight is flooding a wide roadside meadow. They turn off the road and bump over an unmade track that climbs a gentle rise. And there at the top, commanding an immense view of the forest, stands La Grande Heuze: a steep-roofed many-gabled manor house, with cream-coloured walls striped by close-set vertical beams of grey wood.

The Peugeot rolls to a stop by a front porch that is dense with overhanging clematis. The driver stays in his seat.

Alice gets out, and the car drives away round the back of the house. A golden retriever appears and gives a token sleepy bark. The door within the porch is open. There is no doorbell.

She knocks, then she calls.

Ahead she sees down a wide dark hall to a doorway that is bright with daylight. The only sign of life is the dog, which has crossed the hall and disappeared into the room beyond.

‘Hello?’ Alice calls again. ‘Anyone in?’

Still no answer. She follows the path taken by the dog and enters a long room with two sets of French windows that look onto a garden. The windows stand open. The dog lies in the sun on the terrace outside.

Alice goes onto the terrace and sees, across an expanse of lawn, the beech trees of the forest begin again. Where is her grandmother?
She has the uncomfortable sensation that she might be watching her, even now. With this comes a new thought: what if her grandmother doesn’t like her? This hasn’t occurred to Alice before. She realises that unconsciously she has supposed herself to be a surprise gift.
Look! A real live granddaughter!
But just as Guy never wanted a daughter, perhaps this grandmother who gets her own way never wanted a granddaughter.

She is not arriving unannounced. There has been an exchange of letters. But her grandmother’s letter of invitation was not effusive. Curious to see her, certainly, but guarded, cool.

She crosses the lawn to look into the trees, as if there might be some secret there: a leftover impulse from childhood fairy tales. There is no wall or fence. The garden is a glade in the forest. A few years’ neglect and the tall beeches would advance to the very steps of the old house itself, and press like bars on its windows and doors. And yet it doesn’t make her afraid. This is not the tormented forest of nightmares. Beech alleys form spaces that are light-speckled, domesticated, a chain of rooms that go on for ever. You could go wild here, and be safe.

Turning back, she sees a figure standing in the open French windows. She’s slim, with short-cropped silver hair and smooth lightly tanned skin. A long white blouse loose over jeans. Her arms raised in a gesture of welcome.

Wide brown eyes watch Alice cross the grass towards her. Shining eyes that give full attention, that want to know everything. No holding back here.

Alice is flooded with an inexplicable wave of happiness. This silver-haired woman, this never-known grandmother, is simply
beautiful. Alice, who has never been beautiful, sees in her at once herself as she could have been; herself as maybe one day she could be.

Pamela Avenell takes both Alice’s hands in hers and studies her with rapt wondering attention. Alice feels infinitely precious under that gaze.

‘I can hardly believe it,’ says Alice. ‘You’re so beautiful. How can you be my grandmother?’

They stand there like fools, holding hands, grinning at each other, looking and looking. Alice doesn’t know why this makes her so happy, nor does she ask herself.

‘Come into the house,’ says Pamela. ‘Let’s have a drink and tell each other everything. It’s far too hot outside.’

In the house she calls out, ‘Gustave!’ and the driver appears from an inner room. She speaks to him rapidly in excellent French, touching him lightly on one arm before he departs to carry out her orders.