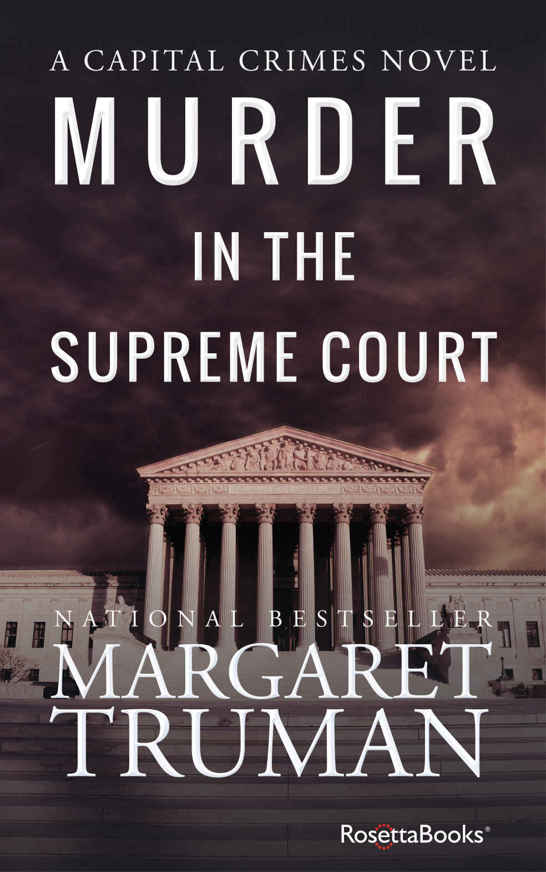 Murder in the Supreme Court

All rights reserved. No part of this book may be used or reproduced in any form or by any electronic or mechanical means, including information storage and retrieval systems, without permission in writing from the publisher, except by a reviewer who may quote brief passages in a review.

Other Books by Margaret Truman

As the marshal chanted the opening ritual, nine black-robed justices stepped through heavy burgundy drapes behind a winged Honduras mahogany bench and took their seats. Attorneys who would present the first set of oral arguments sat at a long counsel table in front of, and below, the bench. Before them were twenty ten-inch quill pens carefully crossed on writing pads, a tradition from the Court’s
earliest days. An older attorney wore a morning coat; the rest were in dark, vested business suits.

“Let’s begin,” said Jonathan Poulson, Chief Justice, who sat in the middle of the bench. Bald except for tufts of white hair around the lower perimeter of his head, wire spectacles perched low on an aquiline nose, a long slender index finger pressed against his cheek, he listened as attorneys seeking admission to the Court were introduced.

A young attorney walked to the podium, cranked it higher, arranged long yellow legal sheets on it. His hair was thick and dark, and he had a sallow, slightly pockmarked face. “Mr. Chief Justice, and may it please the Court,” he said in a strong voice, “two years ago, in the spring, the plaintiff sought to seek an abortion in her home state of Illinois…”

Poulson leaned back in his black leather chair and listened to the attorney’s introductory remarks while looking out over the huge, majestic courtroom. It never failed to impress him, the dignity and beauty of it, walls and columns of white marble from Spain and Italy contrasting with carpet and drapes as red as blood. Directly in front of him, high on the west wall, was one of four thirty-six-foot marble Weinman friezes. Poulson absently identified each of the symbolic figures; the winged female figure of Divine Inspiration flanked by Wisdom and Truth. To the left stood the Powers of Good: Security, Harmony, Peace, Charity and Defense of Virtue. Evil was represented on the other side; Corruption, Slander, Deceit and Despotic Power.

The room was filled with spectators, as it usually was when a controversial issue was being argued. Those with special interest gathered in front of a gleaming brass rail. The press was in a designated section to the left. Behind
the rail sat the general public. Every seat was occupied, and the line outside was long.

The Chief noticed a small boy looking up at the ceiling, a vast expanse of gold-leaf lotus blossoms, symbolizing Endurance, set against brightly lighted red and blue squares.

He returned his full attention to the attorney’s words. He hadn’t missed any of them despite his mental wandering. Years on the bench had honed that skill, first as an appellate judge in the Ninth Circuit, then with the U.S. Court of Claims until being nominated a little more than a year ago for Chief Justice by President Randolph Jorgens.

Jorgens, a conservative, had been swept into office on a nation’s disenchantment with previous liberal, permissive administrations. He could have tapped an existing justice for the Chief’s job but honored the tradition of not doing that for fear of upsetting the delicate balance that existed on the Court. Instead, he reached out to his old friend Jonathan Poulson, who, like the new president, espoused conservative ideology, a hard-nosed Constitutionalist, fiscally sound and overtly disdainful of changes that challenged time-proven American traditions.

The attorney was interrupted by the Court’s only female justice, Marjorie Tilling-Masters, an attractive and brilliant woman who, besides bringing a moderate, reasoned philosophy to the bench, had been responsible, simply by virtue of being female, for changing the tradition of addressing justices as, “
Mr.
Justice Poulson,” or “
Mr.
Justice Brown.” Since her arrival, the
Mr.
had been dropped, although an occasional slip of the tongue still occurred.

The justice to Poulson’s immediate right, Temple Conover, leaned close and said, “The attorney has a lisp.”

Poulson smiled. As the oldest justice and the one with the most tenure on the Court, Conover took advantage of his seniority to display irreverence at times Poulson considered inappropriate. Conover had become a media character,
irascible and argumentative, brilliant, foppish in his dress, flamboyant in his life-style. He’d recently married for the fourth time. His new wife was twenty-six; he was eighty-two. He was a devout liberal.

The justice to Poulson’s left, Morgan Childs, leaned toward his microphone and said to the attorney, “Mr. Manecke, it’s my understanding from your affidavits that the original appeal was based upon the refusal of the state to finance the plaintiff’s abortion. That strikes me as vastly different from the argument you’re presenting here today, that it is a woman’s right to determine the fate of her own body.”

The attorney looked up from his prepared statement and said, “Justice Childs, the issue is broader than simply one of fiscal decision making. That’s why this case has reached this level. We’re dealing with a basic issue of individual rights within a free society. To reduce it to…”

Childs waved his hand and shook his head. “That’s my point, Mr. Manecke. I simply wish to keep things straight. Either we’re arguing a woman’s rights or the balancing of a checkbook.”

A few of the spectators in the audience chuckled. Chief Justice Poulson looked up, which ended the momentary mirth.

Childs pressed, “We’re being called upon to decide a national issue, Mr. Manecke. It would help if we knew what that issue was.”

The attorney tried to get back to his prepared statement but another justice asked a question.

Poulson turned to his chief clerk, Clarence Sutherland, who sat behind him, and asked, “What is the substantive issue here?”

Poulson drew a deep breath and returned his attention to the attorney’s comments. Clarence disappeared through the
curtains, found a book he was looking for in a library housed behind the bench, returned and handed it to Poulson. “Page eleven, sir. It has relevance.”

When the plaintiff’s attorney had completed his hour, the older attorney in the morning coat stepped to the podium. He represented the state of Illinois. Poulson knew him well. They’d been classmates in law school.

“Mr. Chief Justice, and may it please the Court,” he said, “I stand before you today as a representative of a confused and troubled American electorate. Concepts that have withstood the test of time are being rewritten by those with special, self-serving motives. The values that have provided the linchpin of the American dream, the fabric from which the American cloth has been woven, are being placed in deliberate jeopardy. In the case that has been brought here today…”

Justice Marjorie Tilling-Masters picked a piece of lint from her black robe. A security guard politely asked a spectator to remove his arm from the brass rail as the ancient Justice Conover mumbled to no one in particular, “The point, get to the point.”

Chief clerk Clarence Sutherland walked behind the justices and handed a note to another clerk, Laurie Rawls. She read it, looked up and pouted. The note said he couldn’t keep their dinner date. He shrugged and was about to return to his chair when a sharp, clear report crackled through the heavy silence of the room.

“Get down!” the marshal shouted.

All nine justices, robes awry, got down beneath the bench. Spectators looked around, and fell to the floor. Armed guards wearing white shirts and black ties ran to the bench. Clarence Sutherland had dropped to his knees next to Laurie Rawls. They looked at each other in shock.

Clarence poked his head up above the bench and saw a
security man walk into the courtroom carrying an unidentified object. He was smiling. “A lightbulb,” he said in a loud voice. “Just a lightbulb that fell out of its socket.”

“A lightbulb,” Clarence said to Laurie as he helped her to her feet.

“It sounded like a gun,” she said. “God, what a scare.” She slumped in her chair and blew a strand of hair from her forehead.

Clarence leaned close to her ear. “Sorry about tonight but something came up.”

“Have a nice night.” Her words were formed of ice.

Order was restored in the room. The old attorney stepped to the podium, tugged on his formal coat, cleared his throat and said, “Mr. Chief Justice, and may it please the Court, as I was saying…”

Jonathan Poulson sat in his chambers on Friday morning, three days after the lightbulb incident. “Where’s Clarence?” he asked his other clerks.

“Yes.” Sutherland was often late, which always upset the Chief Justice. He believed in punctuality, felt those who didn’t were attention-seeking bores.

The nine justices gathered in a foyer off the main conference room where they engaged in the ceremonial act of helping each other on with their robes before shaking hands and entering the largest of four such conference rooms. Richly paneled in American quartered white oak, it contained a large conference table with a black leather inlay that was piled high with notebooks, memos and briefs. Poulson sat at the east end of the table, his customary place. Temple Conover, the senior associate justice, sat at the west end, again tradition. The junior associate justice, Morgan Childs, took his place nearest the door, where he would act as doorman and messenger, sending out for and receiving reference material.

“Good morning ladies and gentlemen,” Poulson said. “The first matter we are to consider is…”

At ten minutes before ten there was a knock at the door. Poulson looked at the junior justice and raised his eyebrows. It was unheard of for anyone to intrude on the sanctity of the Friday conference. Temple Conover summed up every one’s feelings when he snapped, “Who the hell is that?”

The junior justice opened the door. Standing there was one of Conover’s clerks, Laurie Rawls. “It had better be important,” the Chief Justice said.

“What
is
it?” Poulson said, standing and going to the door.

“
What
is awful?” Poulson said. The eyes of the other justices were now on her.

“Yes… he’s been…” And she broke down and collapsed against Poulson’s chest.