My Sweet Isabella (The Ambassador Trilogy #3) 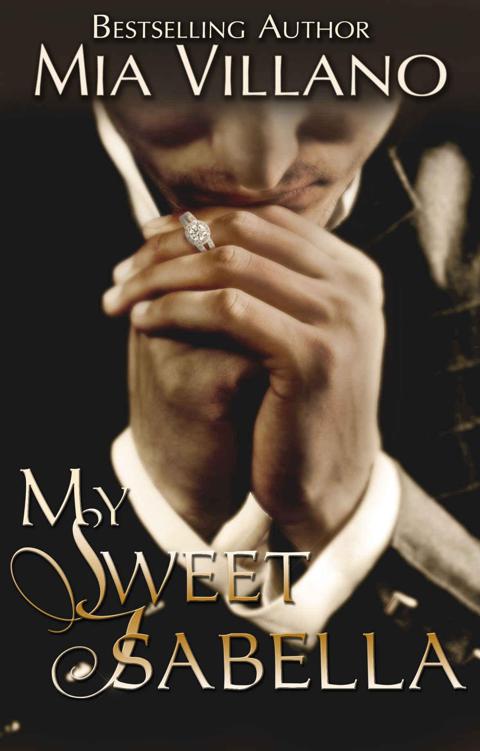 This book is fiction. Name, character, businesses, places, events and situations are still products of the authors imagination. Any resemblance to actual persons living or dead is purely coincidental. The author makes no claims to, but acknowledges the trademarked status and trademark owners of the work mentioned in this work of fiction.

I
swallowed back the lump in my throat. My world was getting on the plane and leaving me alone. I loved her more than I loved anything. Words couldn’t express what I truly felt for her. She was beauty, passion, and indescribable love. My sweet Isabella made my life complete.

Watching her take the steps up to the jet tore at my heart. I wouldn’t see her again for fourteen days. Two weeks before I could make love to her. Two weeks before I could smell her, taste her, and look at her. She turned around and waved at me. I couldn’t describe what went through my body at that moment. I caught a glimpse of her ring I put on her finger the day before. The Cartier diamond that promised me she would be my wife and love me forever. Her wild hair I loved to feel against my body blew around her angelic face. Her bare, tanned legs that brought me to my knees, were flexed sending me to thoughts of them wrapped around my waist. I was tempted to run up the steps and go with her, back to the United States. I couldn’t do that because I still had work to do in Paris.

The night before she asked me about the threats on my life. A painful shot of guilt tore through me as I remembered that for the first time, I lied to her. I couldn’t tell her how bad the threats were. I didn’t want her to worry about me. She just dealt with Avery’s illness, the death of her ex-boyfriend, and making a career change; I couldn’t put her through more. When I looked into her eyes, they showed so much concern, so much hurt. I couldn’t add to the pain. No, I told her I was fine and everything was under control. I told her I was safe. I lied. I wasn’t safe. The threats were direct, and they were ominous. The terrorist group that I unraveled by killing their leader in a hostage rescue, was still vowing revenge. The threats had been ongoing for the past ten years. I didn’t think anything of it until I became the Ambassador, and that’s when the threats became more intimidating. Once I was in the public eye, this group made a point to single me out. The latest threat that came in was a video sent to my Paris office. They vowed revenge on me and anyone else that may have been with me that day when we rescued the hostages. They threatened to kill as many people as they could for what I had done. Was I afraid? This time, yes. This time, I felt something different. This time I feared the threats were real. and the action would be coming soon. I couldn’t tell Isabella. I let her go back home without knowing how much danger I could be in.

After I watched the plane takeoff, I turned around and headed back to my office. I had a lot of work ahead of me. I powered through the day with meetings and conference calls to the United States. There was a briefing on the threats against me, and there was a new recorded message that came in I needed to watch.

The last message was by someone in their group standing outside a barrack somewhere in a desert. All of the messages were verbal or emails, until I received this last one. This was the first actual video sent to the Paris Embassy. Watching the recorded message on my phone with earbuds, I didn’t notice Gustan standing in the doorway of my office. Gustan was our Embassy speaker, the office manager, my sometimes bodyguard, and most importantly, my friend. We served together in the Special Ops, and he was with me the night we rescued the hostages. He was with me when the helicopter exploded and set my body ablaze. He didn’t leave me that night until we made it safely to a hospital. I won’t ever forget that he was there for me. I took my earbuds out and stood up to greet him.

He stretched out his arms. “So, did she say yes?” I had told Gustan I planned on asking Isabella to marry me when she came to Paris. I showed him the ring and told him what I planned on doing, having her entire family involved.

I smiled and slapped him on the shoulder.

I laughed as we embraced. “Of course, she did. How could she refuse me?”

“I’m so happy for you both. Let’s celebrate. I’ll take you down to Le Chocolatier Coffee Shop. My treat.”

Gustan stood about six-foot five with a lot more muscle mass than me. He was big, burly, and quite intimidating. I felt safer with him around. He’d had my back several times in difficult situations, and I hope having him with me in Paris would be the same. I told him about the threats, and since then he has been with me as much as possible.

“Sounds perfect, but you will buy me a chocolate croissant,” I laughed.

“Only if you give me details on how she thanked you that night.”

“Gustan, you know I won’t do that. A man never kisses and tells. However, you will still buy me that croissant.” I laughed at him as we headed down the hall to the elevators. I thought about how she thanked me. She thanked me all night and the next morning. Thinking about what we did made miss her all over again.

Le Chocolatier was one block away from our offices. The streets in Paris were busy with people going about their day, to lunch, shopping, and enjoying the beautiful weather. Not a cloud in the sky that afternoon and the temperature was perfect for a walk to my favorite place. Getting a coffee there every day was becoming a bad habit while I was in Paris. Sometimes, like today, I would sneak in a pastry. They made the best chocolate croissants in France.

Before we walked in, I looked inside and noticed the shop was busier than usual. For one in the afternoon, the place was full of people. I remembered that day was an out-of-school day, and Le Chocolatier was full of children and moms taking a break from shopping, or just in there for a coffee and some good conversation. Gustan held the door for me, and I walked in front of him and took a place in line. Every day, like clockwork, we headed to Le Chocolatier for an afternoon cup and some conversation about work.

I heard gun shots immediately after we walked in as I stood behind a mom and her small boy. My training told me to look for blood, and empty cartridges. I heard screaming and saw people fall to the floor. I noticed blood splattered everywhere. I spotted one of the gunmen out of the corner of my eye. He was firing at random people so quickly I didn’t have time to react. He wore a black mask and was shooting nonstop. Gustan was already on the other one. I lunged when a gunmen pointed the gun at the child’s head in front of me. In broken English he yelled, “This is because of you, Ambassador.” Isabella crossed my mind at that moment as I instinctively lunged toward him. I felt an unbearable burning shoot through me. I heard her voice in my head. Flashes of Isabella raced through my mind. I was falling. My head hit something hard. There was screaming. More popping. The smell of blood was now strong in the air. Tears stung my eyes. Blackness enveloped me.

A
distant noise woke me up. I didn’t want to get up. I was peaceful and dreaming of Isabella, the love of my life; the woman I was born to be with. I heard a beeping sound in the distance. I was lying down, but not in my bed. The sheets didn’t feel soft like mine. The smell was familiar, but not from my home. I was able to see images. There were people standing around me. Unfamiliar faces were hovered around my bed, but I could barely make out who they were. I tried to focus on my surroundings. Where was I? Where was Isabella? She must be next to me, and this was a dream. No, she’d gone home. The damn beeping. My hands, I couldn’t move them. They wouldn’t move. Was I dead? I had to wake up from this dream. I tried to sit up with surprising effort but, my body wouldn’t move. A rush of nausea hit me. There was pain everywhere. My leg ached. I was hot and sweaty. There was something in my nose. What the fuck was going on? I began to hear voices more clearly. I felt warmth against my hot skin. Someone touched my skin. Soft fingers. “Don’t touch me,” I yelled, but nothing came out. Why couldn’t I speak? I forced myself to say something.

“Isabella.” I tried to say. Was I speaking? Could she hear me? It was her. She woke me up from the bad dream. No, it couldn’t be her. She left to go home.

Someone said my name. Images raced in my head again. I focused more, and I saw a hint of light.

“Ambassador. Can you hear me?” I have never had a dream like that. Where was my Isabella?

“Mr. Ambassador?” Who the hell kept talking? The voice was French and didn’t sound like her.

I tried to say something. Nothing came out of my mouth. Deep terrifying panic of not being in control of my surroundings took over. I tried to get up again. I tried to move my body, but I still didn’t have the strength. My hands were still not moving. Where they tied down? Were these people trying to hurt me?

B007M836FY EBOK by Summerscale, Kate
Enough About Love by Herve Le Tellier
Winner Takes All by Dragon, Cheryl
A Symphony of Echoes by Jodi Taylor
The Kissing Tree by Bice, Prudence
Night Marks by Amber Lynn
Midnight in Madrid by Noel Hynd
Love Irresistibly by Julie James
A Most Dangerous Lady by Elizabeth Moss
Embrace the Twilight by Maggie Shayne