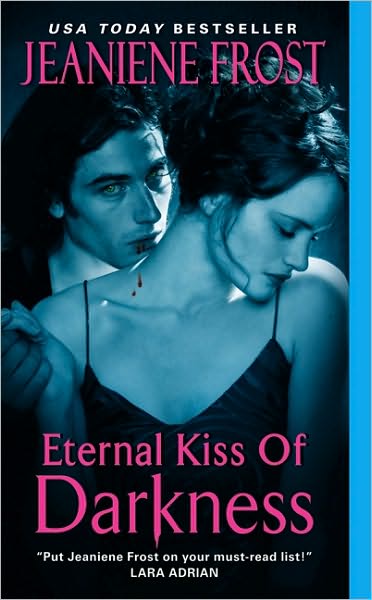 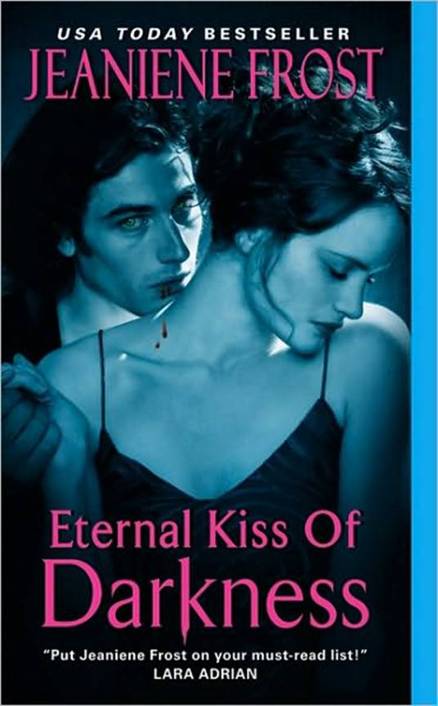 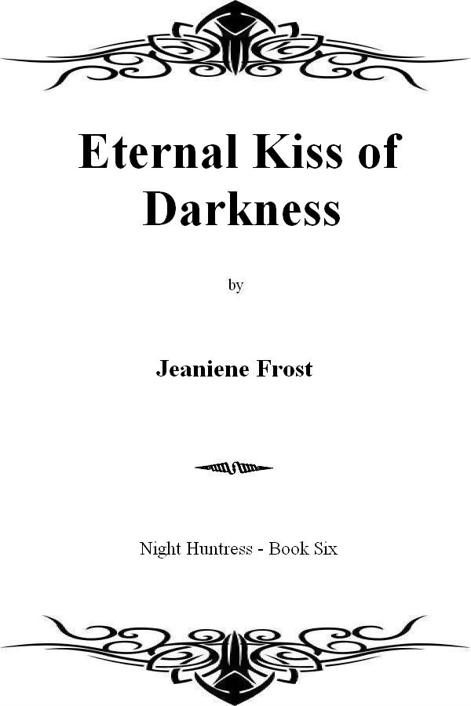 Dedication
For my beloved nieces and nephews
the closest I’ll come to children of my own.
Wesley, Lauren, Patrick, Michael,
Matthew, Christopher, and Amy.
May all of you find your own happily-ever-afters.

M
encheres smelled blood even before he caught the earthy scent of ghouls clustered on the ground floor of the decrepit warehouse. They showed no concern when he walked inside. Another inhalation revealed it was vampire blood two of them stank of. The other four didn’t have that coppery aroma clinging to them, but from the predatory gazes they leveled on Mencheres, they intended to rectify that.

“A young vampire went missing from this area recently,” Mencheres said by way of greeting, ignoring the way the ghouls began to circle around him. They looked to be in their late teens, and from the energy in their auras, they were teens in undead years as well. “Short blond hair, tribal tattoos on his upper arms, silver piercing in his eyebrow. Goes by the name Trick,” he went on. “Have you seen him?”

“Not smart to be out so close to dawn, vampire,” the ghoul with the heaviest scent of blood drawled without answering Mencheres’s question. Then the ghoul smiled, showing he’d filed all his teeth to points.

Instead of inspiring fear, the sight annoyed Mencheres. These ghouls thought they had the advantage because of the impending dawn, but dawn would only sap the strength of a new vampire. Even with his power level cloaked to where it would feel like he was only a young vampire, if the ghouls were wise, they’d wonder at Mencheres’s lack of hesitation in confronting them.

Then again, if they were wise, they wouldn’t have killed Trick in the same area they used as a home. It had only taken Mencheres an hour to track them down. Such stupidity wasn’t only blatant disregard for vampire and ghoul law; it also endangered the secrecy of both their races. In another mood, Mencheres would have killed the shark-toothed ghoul without further conversation, then rounded up the remaining five for public punishment later. After all, Mencheres didn’t require their confession to know they’d killed Trick. Not with the scent of vampire blood on them.

The ghouls were lucky, because today, he wasn’t looking for retribution over Trick’s murder. Perhaps it was a good thing he’d lost his visions of the future, Mencheres reflected. Otherwise, if he’d foreseen that
this
was how he’d end his eons-old feud with the corrupt Law Guardian, Radjedef, he’d question his own sanity.

But if he hadn’t lost his visions, none of this would be necessary. Anger flashed in him. After four thousand years of seeing glimpses of the future, to suddenly have his visions gone was as crippling as it was unexpected. He’d long lamented the frustration of having visions that some people paid no heed to; but now that they were gone, for all his other powers, he couldn’t protect those he cared for. A friend’s recent, accusing words rang in Mencheres’s mind.
Why now
,
when I need you the most
,
are you of no use to me?

Radjedef might have hated Mencheres for millennia, but he was too clever to come after a foe who could counter most hostile moves before they were even made. Now that Mencheres’s visions were gone, this was Radjedef’s best chance. As both men knew, Radjedef wouldn’t hesitate to use his considerable power as a Law Guardian to manufacture charges against Mencheres for crimes that had never taken place. Radjedef was no stranger to bending the law to suit his own purposes. It was something he’d done even before he had become a member of the powerful vampire ruling council.

His old enemy might relish the upcoming confrontation and all the bloody collateral damage it would doubtless involve before one of them emerged a victor, but Mencheres would end this before it started. It rather pleased him to imagine the frustration Radjedef would feel at being denied the opportunity to implement his elaborate plans for vengeance.

So when the six ghouls pulled out their silver knives, smiling in that cruel, anticipatory way, Mencheres simply stood there. This would get bloody, but he was no stranger to blood. Or to pain. Both had been his companions for far longer than these ghouls could even imagine.

He cast one look at the predawn sky, wondering briefly if the sun shone in the afterlife. Before the sun was high, either he or the ghouls would find out.

K
ira walked down Ashland Avenue, the second-to-last street before hers. A sudden breeze blew her hair into her eyes. They didn’t call Chicago the Windy City for nothing. She pushed stray pieces back behind her ears and shifted her heavy backpack onto her other shoulder. After all the times she’d toted her backpack to and from work, Kira would have thought it wouldn’t feel as heavy as it did. Still, she was lucky her boss allowed her to use the company car on stakeouts, and besides, many people who lived and worked in the West Loop didn’t own cars. They just didn’t have to carry around the various cameras, camcorders, binoculars, and other necessary stakeout items that she did.

At least it had been a productive night. Her surveillance of her client’s cheating wife finally paid off in the version of several incriminating photos that Kira dropped off at her office before she’d taken the Green Line back to her neighborhood. She could sleep in as late as she wanted to today, and even her exacting boss wouldn’t have a thing to say about it.

Being a private investigator meant tuning in to her surroundings, which came naturally to Kira, but her focus sharpened even more when she rounded the next corner. Walking this particular stretch of road during the daylight was fine, but now, it made her uneasy. She was glad the sun had started to peek out. The line of dilapidated warehouses were supposed to be gone by now, but the lingering recession had slowed their razing and rebuilding. The stretch of unsightly buildings meant the rent in her building farther up the block was much lower than it would be once shiny new apartments replaced the graffiti-laced, abandoned units, but it also meant that she had to be watchful now. Muggings weren’t uncommon in this area.

She was almost past the last of them when raucous laughter jerked her head around. It had come from inside one of the warehouses, and it sounded more ugly than amused.
Keep walking,
Kira told herself, patting the pocket of her backpack where she kept a gun.
You’re almost home.

That harsh laughter rang out again, this time, right on the heels of what sounded like a pained shout. Kira paused, listening hard. If it had been later in the day, the noise from cars and pedestrians would’ve drowned out anything coming from the warehouses; but with most people still sleeping, she next caught what sounded like a loud moan. Whoever had made that sound was hurt, and when it was followed by more of that ugly laughter, Kira knew the two were related.

She slipped her backpack off, pulling out her cell phone while walking faster toward the safety of her apartment building.

“Nine one one, what’s your emergency?” a voice intoned after Kira punched in the numbers.

“Aggravated assault,” Kira amended, surprised the dispatch operator hadn’t registered the police code. She gave the address of where the warehouse was located. “Sounds like the bottom floor,” she added to be more specific.

“Please hold while I transfer you to that station,” the operator replied. Moments later, another voice asked what her emergency was.

“I’m reporting an aggravated assault,” Kira said, not bothering with the code this time. She gave the address and information again, her teeth grinding in frustration as she had to repeat twice what she’d heard.

“So you never actually saw an assault?” the dispatch operator asked.

“No, I didn’t go in there,” Kira said stiffly, not walking now that she was close to her apartment building.

“I prefer to be anonymous,” Kira said after a pause. She had a history with the police that wasn’t necessarily pleasant.

“We’ll send a car around,” the operator intoned.

“Thanks,” Kira muttered, and hung up. She’d done all she could. Hopefully it would be enough for whoever’d made that awful noise.

But when she started to walk toward the front door of her building, her steps faltered. Instinct told her to turn around and head back to the warehouse. It would be five to ten minutes before the patrol car arrived. What if the unknown, injured person didn’t have that long?

Never try to be a hero
,
kid. Leave that to the shields.

Her boss’s admonition rang in Kira’s mind, but instead of making her feel better, anger rose. If not for her ex-husband, she’d be one of those “shields.” She’d aced the police academy, gotten her certification in law enforcement, and she was just two blocks away from that scream, not several minutes like the patrol car.

Mack’s voice, deep and scratchy, sounded through her mind next:
Save one life.
That had been her mentor’s credo. If Mack had been more like her boss, Kira might be dead. Not standing on a sidewalk debating whether or not to help someone in need.

Mack wouldn’t have hesitated, badge or no badge. Who did she want to be like, her old friend Mack, or her jaded boss, Frank?

Kira spun around, heading back toward the warehouses and the source of that scream.

M
encheres let out a long moan when the silver knife slashed into his sternum. When the ghouls first started cutting him, he hadn’t made a noise, and they’d drawn their blades even more slowly across his flesh, taking his silence as a challenge. So he grunted, moaned, and even shouted. It helped; they grew more excited, their cuts went deeper.

Soon, he’d have to choose between using his energy to cloak the fact that he was a Master vampire, or using his power to protect himself from the worst of the pain. He’d lost too much blood to keep doing both. But if his attackers had a grain of sense, revealing the extent of what he had coiling inside him might make them run away. No, he couldn’t chance that. Pain it was, then.

Mencheres dropped the mental barrier he’d erected between himself and those relentless, seeking knives. Immediately, his body felt like it was on fire, the silver causing an intense, agonizing reaction as it sliced through him.

With his barrier to the pain down, a new problem arose. Every new cut or stab wound roused the swirling energy in him that craved retribution. Mencheres forced it back, concentrating on keeping his aura tamped down, fighting his urge to kill the ghouls even though his power demanded to be released.

“Stakes,” Mencheres said, calling him by the name the others had used. “Are you inexperienced, or is this merely the best you can do?”

The Curse of Arkady by Emily Drake
Death by Proposal by Skye, Jaden
Medium Well (9781101599648) by Benjamin, Meg
The Battle by Barbero, Alessandro
Blood Shadows by Lindsay J. Pryor
Foolproof by Jennifer Blackwood
Practical Demonkeeping by Christopher Moore
A Night of Errors by Michael Innes
The Crazy Horse Electric Game by Chris Crutcher
The Language of Dying by Sarah Pinborough