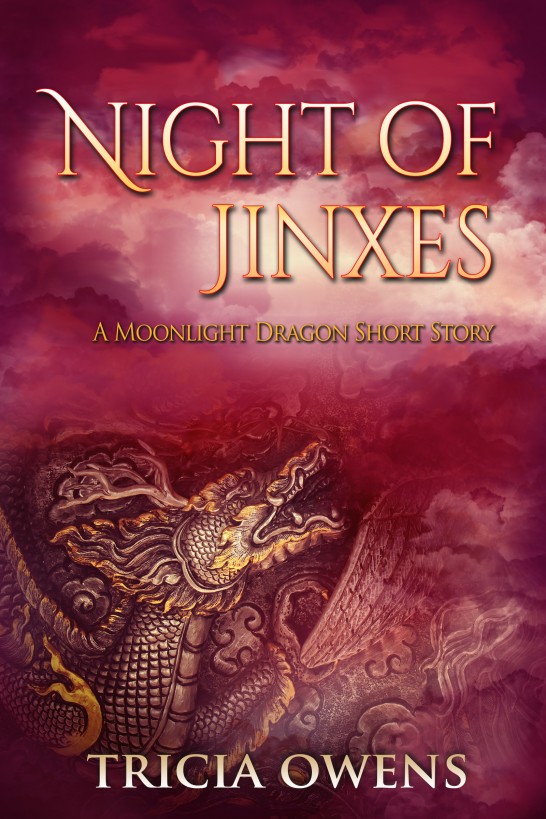 All rights reserved. This story or any
portion thereof may not be reproduced or used in any manner
whatsoever without the express written permission of the publisher
except for the use of brief quotations in a review.

This is a work of fiction. Names,
characters, businesses, places, events and incidents are either the
products of the author’s imagination or used in a fictitious
manner. Any resemblance to actual persons, living or dead, or
actual events is purely coincidental.

Rise of the Dragon (coming
soon)

The voice on the phone said, "I'm
going to kill you."

Considering my phone was currently in
Google maps mode, I was a tad concerned.

I closed out the map program and
checked to see if I'd somehow turned on the call feature or
accessed my voice mail. The answer was no for both. My phone
shouldn't have spoken to me in that flat, featureless voice and it
sure as hell shouldn't have threatened me.

I wasn't one to freak out over
nothing. I'd dealt with necromancers, vicious shapeshifters, demons
straight from Hell, and I'd been bitten by a vampire, among other
things. I knew what trouble was and what it wasn't. This wasn't
flashy like the other trouble I'd encountered, but I recognized
that it had the potential to be a serious pain in the butt. And
yeah, maybe dangerous enough for me to fear for my life.

A few feet away from me, my best
friend Melanie sat in the haunted rocking chair near the door of my
shop. She looked up with interest. "What problem?"

"Either my phone has suddenly become
possessed, or something in here wants to kill me."

"I thought something was always trying
to kill you," she offered helpfully. "Or at least curse you in a
nasty way."

"Well, sure, but this is different.
This sounds sort of personal."

Melanie scrunched up her nose. When
she did that, she looked very much like the monkey shapeshifter
that she was. "What do you mean?"

I motioned at the shelves of the shop.
They were packed with all sorts of junk that people had pawned or
sold to me in moments of desperation. Since Moonlight Pawn was
located right next to Fremont Street in downtown Las Vegas, many of
my customers were curious tourists and gamblers looking to
replenish their bankrolls.

However since I was a dragon sorceress
on the downlow, my shop attracted members of the magickal community
as well. That meant there were some pretty strange items on the
shelves, some fantastic, some that were more than a little bit
creepy.

"Most of the magickal items in here
are cursed in passive ways," I pointed out. "Nothing happens until
you interact with them in some way, like when you pick it up or
open its drawer or try to use it." I held up my phone. "The feeling
I just got from this message is different. It knows me and it wants
me, not any poor sucker who comes along. I'm telling you,
Melly—something bad is about to go down."

Her dark eyes widened and the ends of
her blue dyed fringe nearly poked into them. "Like
what?"

"I wish I knew." I eyed the inventory
in the shop. "I've had most of this junk for a long time and
nothing's happened. Now, though, I'm wondering if I should mistrust
all of it."

Moonlight Pawn was situated in a house
that had been converted for retail. My studio where I slept,
showered, and ate was separated from the shop floor by a simple
bead curtain. The nearness was convenient, but there wasn't much
defense against anything, really. I couldn't even stop a
breeze.

Bothered, I emptied the old hat box I
was holding of its last item: a shallow bowl with a glass lid. The
bowl held a couple of inches of sand. I lifted the lid and lightly
ran my fingers across the sand. Immediately the sand shifted to
form letters that made a word: ASK. Cooler than a magic 8-ball any
day, but I couldn't help wondering if this was the source of the
threat I'd just heard.

"You think it's that?" Melanie asked,
reading my thoughts.

I shrugged. "This and five other
things were left on the sidewalk this evening. I hadn't sensed
anything malicious from any of them, but maybe I was
wrong."

"That's kind of suspicious, isn't it?
Someone just leaving that stuff for you?"

"Not really. Magickal beings dump
stuff here more often than you know. They don't care about making
money; they just want it away from them." I placed the glass lid
back on the bowl of sand. "Maybe a demon is on the other side of
this, talking back."

Definitely possible. It was also
possible that the other five items—a mug, a pair of gloves, a
scarf, and a teapot—carried nasty curses. I considered removing
them from the shelves where I'd already placed them, but I hadn't
sensed evil from them. It kind of irked me to trash them without
justification.

Just in case, I went out onto the shop
floor and collected all six items and placed them together on one
shelf so I could keep an eye on them and possibly narrow down any
nasty business to that area.

I nearly added the hat box to the
trash pile since it was so battered, but at the last second I
decided to keep it for storing shoes or something. The majority of
my stuff was in Tupperware containers, which weren't exactly
stylish. I tossed the box into my studio.

"When I was little, my dad told me a
story about our ancestors and curses," Melanie said as I returned
to the counter. She rocked once on the rocking horse. "Monkey
shifters are descended from the Mayan people, right? But how? My
ancestors weren't sleeping with monkeys or anything."

"I had wondered about that," I said
straight-faced. I grinned when she stuck her tongue out at
me.

"My dad told me that a long, long,
long, looong time ago on the first day of the Mayan solar calendar,
a ceremony was held called Night of Jinxes. Like, the Mayan gods
all stood in a circle around a cenote and threw jinxes at each
other, trying to knock each other into the water. This went on for
fifty-two hours on the longest night in Mayan history. One by one
the gods fell into the water: the jaguar god, the feathered snake
god, the rain god and mountain god...until at last there were only
two gods standing: a howler monkey god and one of the gods of
maize."

I nodded, wondering what the heck this
had to do with my angry crank caller.

"The two gods threw jinx after jinx at
each other. All different sorts, trying to find each other's
weaknesses. People saw jinxes they didn't know were possible! And
yet it seemed that neither god would win. Then suddenly the howler
monkey god collapsed.

"The god of maize celebrated. He was
the greatest god of jinxes! He turned to tell the Mayan people to
worship him and that's when the howler monkey god sat up and threw
a banana at the maize god's head, knocking him into the cenote."
Melanie giggled. "The Mayan people were so impressed by the
trickery of the howler monkey god that eight of them begged to be
made into the image of a monkey to honor him. And that's how monkey
shifters were born!"

"Melly, that's really cool. I think
you've got plenty of your howler monkey god attributes," I teased.
"But what in the world does that have to do with anything that's
happening here?"

"Duh, we need to hold a Night of
Jinxes and try to trigger all the curses that are in here until we
find the one we want!"

My eyes bulged. "What?! That sounds
like a terrible idea. That'd be like—like a magickal
Armageddon."

"Nah, you said it
yourself: there's nothing aggressive in here. Except for one
curse.
Your
curse. When it can't help itself and jumps on the bandwagon
and reveals itself, we isolate it and pounce on it."

She winced. "Well, maybe, but I really
doubt it, Anne. Seriously."

"As long as you doubt it then why
should I fear?" I shook my head. "Triggering everything in here
would be the last thing I'd do, Melly. Who knows what would
happen."

She looked around, her attention
pausing on various items before moving on. "I don't know. The most
dangerous things you've got in here that I know about are the
zombie nutcrackers. And they can only bite your fingers if you
stick them in their mouths."

"You're wrong. The most dangerous
thing in here—one of them that I know about, anyway— is this music
box." I turned and pointed at the small, black lacquered box
sitting on the shelf behind me. "It opens to somewhere in deep
space. Literally. I've opened it twice to peek inside and both
times I was nearly sucked into the thing and pulled into orbit
around a planet."

"That's kinda cool," Melanie murmured
to herself, completely missing my point. I'd forgotten that she
admired some of the cursed things in here and felt that she could
have created better ones if given the chance.

"I should get rid of this box," I
mumbled. "It's too dangerous to sell."

"Uh, I don't think you can just toss
it in the trash, Anne. You gotta have someone magickally destroy
it."

She was right, which was annoying. The
music box was both valuable and dangerous. I'd only gotten hold of
it by an awful twist of fate: a witch had called the shop,
informing me she would be bringing the box in. But either
accidentally or due to cosmic forces, she had been hit by a car in
the street just outside the shop. The box had rolled to the front
door of Moonlight Pawn and though I'd tried to find relatives of
the witch, no one had ever come calling. If that wasn't a sign that
I was supposed to take the music box I didn't know what
was.

Anyway, the music box from space was
dangerous but it wasn't what had sent me the angry phone message,
otherwise it would have done so months ago when I'd first obtained
it.

"The music box isn't my problem," I
said. "But I don't know if provoking everything that's in here will
determine which one is." However, my subconscious had grabbed hold,
and now an idea began to form. "Unless we record things from a safe
distance...with a camera."

"It'll be like found footage horror."
Melanie's jaw fell open. "It sounds super scary. Do you think maybe
we should call the guys for this?"

I gave her a look. "You're telling me
you need a big, strong guy because you're a scared, helpless little
female?"

She thought about it before squeaking,
"Maybe!"

"Tsk, tsk, Melanie. We're
doing this on our own. It was
your
idea, so now you have to live with the
consequences. Just like when you dyed your hair blue."

"Try telling that to your mom. You
remember how she flipped out when she saw your bangs."

"This won't be nearly as
bad as that." I wasn't sure how this had suddenly turned
into
my
project,
but I was pushing it to happen. "In the morning after I close up,
we'll set up a camera and set off some curses. Who knows what we'll
find."

Four a.m. on Thursday morning and it
was time to close. Oh, there would be more business if I kept the
neon Open sign lit—Vegas never slept—but I always had to draw the
line at some point and say enough was enough.