Read No Way Back Online 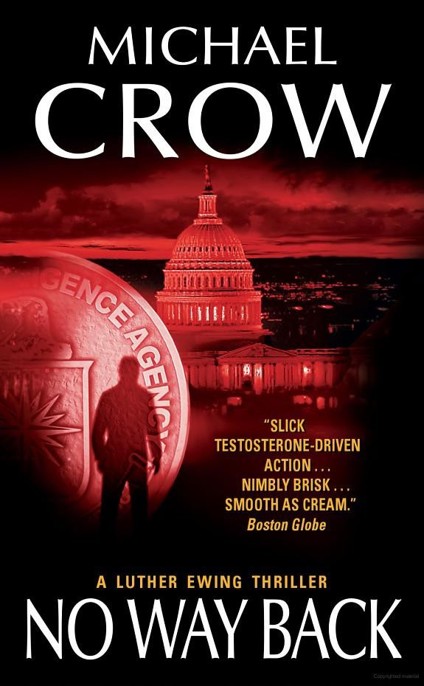 For C.R.M., who wasn’t always just an attorney.
Some people still turn pale when they hear his name.

NO CALL NECESSARY. I’M UP BEFORE SUNRISE, PULLING on sweatpants…

THE GODDAMN BED’S TOO SOFT. THEN IT’S TOO HARD. I…

EVER NOTICE HOW ORANGE THIS CITY IS?” I ASK AS…

THE ROUTINES DON’T VARY: I RUN WITH ALLISON every morning…

NADYA NARRATES, STILL CURLED IN HER CHAIR. SHE’S the only…

I’M STALKING SLEEP THAT NIGHT, BUT SLEEP STAYS OUT of…

“HEY! BIRDBONES, THERE! YOU THE INFAMOUS LUTHER Ewing, or some…

COLD LIGHT, TOO BRIGHT, IN THE LOBBY BEFORE DAWN, and…

WESTLEY GONE—NOBODY MENTIONS WHERE—AND Sonny pleased about it, but…

MAINTAIN. DOG’S WISE ADVICE. GAVE IT TO ME DURING a…

THERE’S A CAR—NOT ONE OF THE LINCOLNS, BECAUSE I…

I PHONE IN THE MESSAGE TO NADYA, NOT ALLISON. I…

“YOU WILL BE DINING AT THE VERSAILLES HOTEL,” Nadya says.

SONNY COMES INTO MY ROOM EARLY NEXT AFTERNOON lugging a…

TOMMY THE WIZARD’S FACE IS GLOWING WITH PLASMA light from…

IT’S DANK IN THE CONTAINER CANYON AND DIM, ONLY ambient…

NIGHTS HERE ARE SOFT AS VELVET, THE AIR ALMOST too…

Other Books by Michael Crow

“THAT MISTAH KIM, HE’S A TIGER, I SHIT YOU NOT,” SAYS
the fat Buddha, smile wider than it needs to be, his eyes glittery obsidian slits. We’re slouched in supple Italian leather chairs, face-to-face across a hand-oiled maple burl table. This Buddha, a serious heavy, knows very well his dark gaze unnerves most people, but he is not trying for that effect now with me. He’s loose, he’s relaxed, beer in hand, being about as sociable as he’s able. He answers to Sonny. At least with those few he permits to reach a certain level of familiarity.

“Good. So, you know that old Chinese proverb thing, the one talks about riding the tiger?” Sonny (official name Park Sung-hi) asks.

“More or less, yeah.” Now I’m about to receive some scuffed plastic pearl of oriental wisdom. And I have to be polite about it. Though even a genuine one—if any exist, and I’ve heard enough to deeply doubt that—wouldn’t engage my interest at the moment. It’s deep night, we’ve been cruising seven miles above the Pacific
for too many hours, there’s an aggressive headache deployed in the back of my neck and moving up fast. The others on board have long since drifted into sleep, lulled by boredom and the steady dull hum of the plane’s engines. But Sonny, on maybe his sixth bottle of Red Rock, apparently believes I’m in need of education.

“Everybody understand,” he says, “you got to be some kinda goddamn fool, you jump on tiger’s back. Everybody know this very, very well. Never mind. Lotta people, they trying it anyway. Total craziness, eh?”

“Not Sonny. No way. Never. Me, I’m completely happy as tiger’s assistant only.” He’s shucked his suitcoat, but not the custom shoulder rig carrying twin mini-Uzis—very old tech but absolutely reliable, absolutely devastating at close quarters. “You happy, Mistah Prentice?”

“Couldn’t be more,” I say. Prentice, Terence, is the name on the Canadian passport bearing my photo, the one I’m carrying in my breast pocket. Sonny knows it isn’t genuine, knows the name’s a ghost name. He may or may not be aware of other passports in other names, other nationalities. They’re secured behind the lining of my attaché.

“Does it? I’ve been wondering a little sometimes,” I say, hoping my tone suggests this information is enlightening, a revelation of something I never saw or sensed during these weeks in the almost constant company of Sonny, and sufficient face time with Kim himself.

“For sure, for sure. So you knowing it’s smart to help him stay that way, you bet.”

Sonny drains his Red Rock. I watch him put the bottle on the table, shift his shoulder rig slightly so he can sink deeper into the cradling down cushions of his chair.

This Buddha’s conscious I’m ex-military as positively as I am he served in the Republic of Korea Army. He understands I wouldn’t be here if I didn’t have the same skill set he acquired. Since we’re both post-Vietnam generation, his experience had to be black ops. Scary midnight strikes through the DMZ. Nasty actions nobody admits happened afterward. Slitting throats, trading fire up in the evil hermit state of the DPRK. Democratic People’s Republic of Korea, likely the world’s final Stalinist theme park.

He knows I’ve played the same hard game, anywhere from the Mog, rocking skinnies in the Casbah, to Bosnia to Taliban-stan or Mindanao. Almost any point on the compass, in fact, since my primary employer has global interests beyond comprehension.

And we did have to give each other a short, sharp demonstration (body count: five) quite recently, though it wasn’t our choice, we didn’t feel like talking much at the time, and haven’t said a word about it since.

But just because certain things are never said does not mean they aren’t heard, loud and clear. Too loud for me, in my current condition. I only want to shut it all down, go deep into the pain that’s wracking my head, kill it, and sleep.

That smile. “You and me, we stay happy, we get along fine,” he says.

Oh, outstanding, Sonny. Until I look the wrong way or say the wrong thing out where we’re headed, and you feel it’s your duty to cap me to keep your Mistah Kim bright and content. But right now my Buddha pal lets
himself settle even deeper into his chair, sighs once or twice. As the Master said, in serenity lies virtue. He’s asleep in less than a minute.

I am lacking in virtue, apparently. Sleep eludes me, even after I dominate the throb in my temples, even though I’m so tired my eyes are scratchy. I have the most unsettling sensation of being a stranger inside my own head, seeing and feeling extraordinary things that are happening to someone I do not know. Or I’m watching a movie starring an actor who looks remarkably like Luther Ewing, from the very last row in an utterly deserted mall cineplex with a very small screen.

There are a few facts I’ve grasped. Mister Kim, he
is
some kind of business tiger. That’s why I’m armed and airborne in his corporate jet. Not a Gulfstream, or any other normal private plane. His very own 747, like none other flying. Kim bought it from some failing airline, maybe Swissair or Pan Am, and had it transformed into something that resembles a yacht custom-fitted for a man whose name repeatedly appears on the
Forbes
annual billionaire list. What had been the first-class section and the hump above it are Kim’s private lounge and bedroom. I haven’t been in there, but it’s no challenge to extrapolate what it must be like from the main compartment, where Sonny’s low snoring is beginning to sound like the first warning growls of some jungle beast.

Pure luxe in every detail. If the sycamore-and-brushed-steel sideboards, the maple burl tables, the twelve matching Saporiti chairs weren’t discreetly bolted to some light, synthetic, but completely convincing imitation of sixteenth-century marble flooring—which, in turn, is a display for antique Tabriz and Isfahan carpets—you’d be certain you were in the VIP lounge of a five-star European hotel. The bulkheads, front and rear, are paneled in pale
sycamore. The paintings hanging there—contemporary work by artists I can’t identify—are almost certainly museum-grade.

Aft of the lounge there’s a galley that looks like a kitchen straight out of
Architectural Digest
. And beyond that, at least a half-dozen private cabins, each with a bed and full amenities.

A slim Japanese girl, with a face that would be exquisitely beautiful if it weren’t lifeless as a porcelain doll’s, materializes at my side. In a whisper that sounds like a love song she asks if I require anything. I don’t. She bows, makes Sonny’s beer bottle disappear, and fades back to the galley, the rustle of her kimono scarcely audible. She leaves only the faint scent of some flower I can’t name.

The scale of this wealth is much too great for me to absorb. Kim is some big tiger. Beyond imagination, even though I’ve been briefed by my employer. I’ve also been educated and made over so I’ll pass as a tiger’s assistant, had a smooth and stylish veneer laid over this ex–Special Forces slob with offensive habits. I applied myself to the process. Most any observer, checking out my clothes and manners and demeanor, would take me for an experienced member of a major corporate entourage. That is what Kim demands of his assistants. Most especially those like Sonny and me, whose job descriptions have nothing at all to do with business.

Security cannot look like security. That is Kim’s nonnegotiable requirement. He’s a tiger, after all. It is a matter of face for him. But I wonder if he knows he may presently be taken for the ride of his life on the back of a much larger, meaner, tiger.

It’s not a question, really. I can call up every encounter, every move in the four-month trip that put me here. I can hear Westley, pitch perfect, stating the contract. Feel how his eyes, more than his words, seal the deal. Remember every detail of the prep that follows. It’s all hi-rez in my memory bank. No confusion, nothing vague or shadowy about any of it.

Except why I did it.

I’d done it before. I’d sworn never again, after the first time. I’d even refused a second offer a few years back. But my past somehow keeps bleeding into my present.

When this first started happening, I believed I’d figured all the whys and wherefores, most ricky-tick. Simple cause and effect, I’d concluded: a lifetime of training, informal and formal, followed by some fairly ferocious real-world action, and what was basically only downloaded software mutates to something permanently embedded in your frontal lobes, something that ignores or overrides conscious commands when it wants to. Add a head wound, the plate in my skull, the meds I’ll have to drop four times a day every day for the rest of my life—unless I dig unpredictable, sudden seizures that put me thrashing wildly on the floor, eyes rolled back and foam bubbling from my mouth.

No wonder there’s some leakage.

So. You’re leaking? Pressure bandage works, usually. Everybody knows this very, very well, as Sonny would say. But my friend Annie, who’s a psychologist as well as the woman who knows me better than any other, started wondering out loud after she saw one or two of those bandages get so saturated I had to toss them and slap on
new ones. She says I’m going to hemorrhage one day. Past and present, all one deep-red arterial surge flooding my brain, leaving me unable to distinguish between what I’ve done and what I’m doing, what was then and what’s now, who I was and who I am.

“Don’t go. Please don’t go. You need some serious intervention. You need it this minute, Luther. Or the real you may not make it back,” Annie’d said to me just before I left. I didn’t listen. Maybe I should have.

Too late. Change the bandage again. Press hard. Stop the time leak, for the duration of this job anyway. But first just let it bleed a while. I can do that. I can rewalk my own twisted trail, find the sense of it.