Read Nowhere To Run (To Protect And Serve) Online

Nowhere To Run (To Protect And Serve) 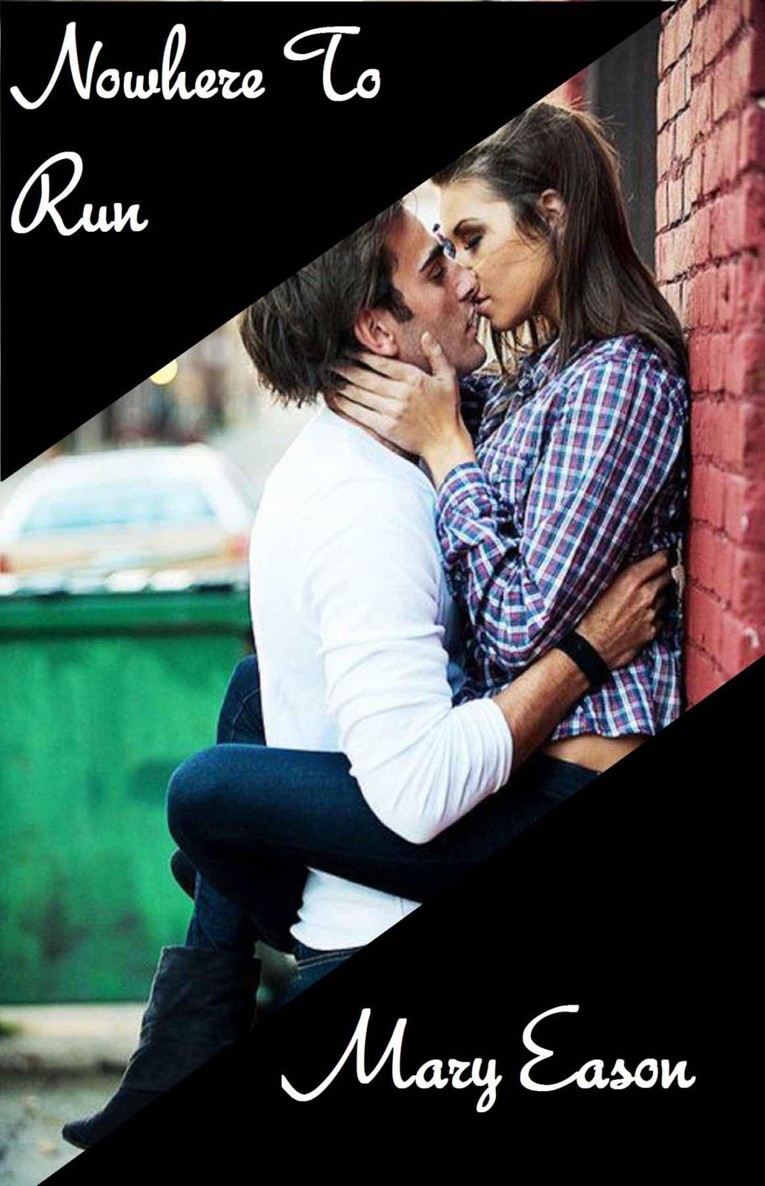 “It’s okay.” The rough strain in his voice sounded unfamiliar.

“Riley.” His name coming from this very dangerous, very sexy woman next to him resounded with invitation.

“Please…” Nothing about Jordan Scott resembled the women he usually found himself attracted to, yet it didn’t stop him from wanting her.

Riley opened the door. “Turn around.” They stood close. He could touch her if he wanted, smell the scent of her hair. She turned, her soft breath
brushed his face.

She slicked her tongue over her lips. Perhaps a nervous reaction for her, but a very dangerous distraction for him because it brought his attention to her pouty mouth, the kind designed for kissing.

Under different circumstances, Riley might stay here forever and pretend he watched the quietness of the lake while stealing little glances her way. Did she realize she represented the picture of a woman torn—relaxed and yet ready to bolt at a moment’s notice?

Riley always trusted his gut cop instinct. It told him if he didn’t get through to her now, he wouldn’t get a second chance.

This e-book is licensed for your personal enjoyment only. This e-book may not be re-sold or given away to other people. If you would like to share this book with another person, please purchase an additional copy for each person you share it with. If you're reading this book and did not purchase it, or it was not purchased for your use only, then you should return to the author and purchase your own copy. Thank you for respecting the author's work. This book was previously published. This book has been re-edited and refreshed.

Doctor Jordan Scott
’s trauma team covered the six flights of stairs leading from the Ped’s Unit to the helipad on the hospital’s rooftop in record-breaking time.

The
O.R. was on standby. Doctor Larry Aims, the on-call trauma surgeon stood ready as well. Jordan, a board-certified Ped’s Intensivist would assist the surgeon if necessary. A virtual army of the best medical personnel in New York stood ready and waiting.

The calm before the
inevitable storm lasted only a couple of minutes. Then the world around them exploded in a flurry of whirling copter blades, roaring engine, and a cloud of dust and debris that made it virtually impossible to see or hear.

“
Any change in the girl’s condition?” Jordan yelled over the noise of the helicopter to the senior EMT, Pete Walker, a former army medic just returned from Iraq who emerged from the aircraft followed by the rest of his crew.

“Stats are
dropping rapidly. Her belly’s swollen. She crashed once already on the scene. Hasn’t regained consciousness since. Parents are on their way in.” Pete looked Jordan dead in the eye. “Doc, she’s barely hanging on.”

She gave a brisk nod
in answer to Pete’s straight-to-the point assessment of the girl’s condition. “When will people learn that drinking and driving is nothing but a recipe for disaster?” In the time it took the team to reach the O.R., the girl’s vitals plummeted once more.

“Nothing.
” Kat Brenner, the Ped’s nurse on call and Jordan’s friend announced with a shake of her head.

For more than forty-five minutes, the team frantically fought to resuscitate the girl without avail.

“Dammit.” Jordan yanked her gloves off with a loud ‘smack’, then announced, “Time of death, eleven-fifty-seven.” The girl hadn’t lived to see another day of play.

Losing a child under any circumstances was heartbreaking, but having one so innocent die because of someone’s stupidity always got to her. The girl’s death was as senseless as it was tragic.
Jordan dreaded facing the parents and telling them their child was gone.

“We did everything we could,” Kat offered gently. The sympathy in her eyes was hard to take and not lose it.

Emotion well
ed in Jordan’s throat. “I know. But that doesn’t make it any easier, does it?” She turned from Kat, desperate to find somewhere quiet to escape for a few minutes from the heartbreak that clung to the O.R.

“Where are the parents?”
she asked quietly.

A
nother minute ticked by before Kat responded. Her voice quiet with understanding. “They arrived in the E.R. fifteen minutes ago. One of the nurses took them in the doctor’s lounge. You want me to have Elliott talk to them?” Kat always could read her like a book.

Jordan jerked her head in answer.
Words were hard to come by. God, sometimes she really hated this job. “No. I’ll be right down. I-I just need a moment.” She left Kat without waiting for her response.

Before she lost control
.

Lately, it felt as if her emotions were always
close to the surface. And it had nothing really to do with the child’s death tonight. That had just been the final crack in her once granite-like resolve.

Her life had been spiraling out of control for weeks now.

Unshed tears stung her eyes and nose. Steeling herself against the suffering going on around her, Jordan kept her gaze glued to the floor until she reached the door of the tiny-closet office that had become her sanctuary lately. She’d worked hard to gain the respect of her peers. She had a reputation for having courage and strength under fire. The one to turn to in a crisis. She didn’t fall apart on the job. Here lately, Jordan barely recognized herself anyone.

She
closed the door on the world outside and leaned back against it, squeezing her eyes shut.

She’d never felt more alone with the
difficult decisions facing her than she did tonight.

Part of her still loved him. But an even greater part hated him for what he’d done to her. To them. He’d broken more than just her trust. Her heart felt as if it had become a puzzle of a thousand pieces. Even if it could be put together again, she’d never be the same.

They’d
never be the same.

The cell phone she
was force to keep at her side at all times vibrated to life inside its resting place deep within the pocket of her lab coat. A casualty of the job. There was never a moment when she was within these hospital walls that she wasn’t on call.

“So how do you feel about having a June wedding?” Caesar
. The last person she wanted to talk to when she was feeling this vulnerable. His seductive voice sounded different somehow. Excited. Something had happened. He’d never get excited about their wedding plans. In his mind, her agreeing to marry him would come as natural as his next breath. He couldn’t accept that the very thought of marrying him now made her physically ill.

She remembered all those
times in the past when he had the power to make her believe anything he told her. Even a lie.

She felt like such a fool. Everything about her fairytale romance with Caesar had been proven just that. A fairytale
.

“Jordan…” The hard edge had returned to his voice
as his tone mocked hers. It was always the same whenever they tried to talk to one another anymore.

Even through the phone, she could hear his put-upon sigh. “Sweetheart, why can’t you get beyond this? It’s been weeks. I’ve apologized. I told you she meant nothing to me. Once we’re married—“

“Get beyond it?” she blurted out incredulously, every muscle in her body tensing for the inevitable argument that was sure to follow. “You expect me to just pretend this never happened?”

“No, of course not, but I want you to stop behaving like a child.”
he bit out making it clear his patience was reaching an end.

He had no idea the war rag
ing within her. Jordan knew she was living on borrowed time. She couldn’t go on this way much longer. She couldn’t go back to the way things were between them. It felt as if her life had gotten stuck in neutral. Going nowhere.

“I need more time.” She tried again to get through to him. She was beginning to sound like a broken record.
Caesar just didn’t get it.

“What you need to do is marry me.” He insisted. “Stop playing games and set a date or
…”

“Or what?”
Part of her wished they’d get their feelings out in the open once and for all. End it, before they both hated each other.

Caesar
refused to understand why she was making such a big deal of his little ‘indirection’. After all, they weren’t married yet, and in his culture that meant he hadn’t really done anything wrong.

“Or nothing
,” he amended, not bothering to hide his annoyance any longer. “Will you at least consider June?”

The two-carat diamond engagement ring on her left hand winked in the dim light
as if to mock her. She couldn’t marry him in June. Or ever.

Dammit.
Every single time they talked anymore, she ended up an emotional wreck.

“I have to go.” Her voice shook. She would have given almost anything to remain strong. Not let him get to her
again. To hear her weakness. She couldn’t.

“Jordan…
everything will be okay in time,” he said with more feeling than she’d seen in him in a long time. She could almost believe he meant it. “You know that I love you. Surely, we can work this out.”

“I’ll have to call you back.”
She felt the exhaustion of the child’s death reach down to her very soul. It was as if she’d become emotionally nonexistent. She couldn’t have this conversation with him tonight. She doubted if there’d ever be a time for them.

The veiled anger in his voice gave her goose bumps and helped her find the strength to do what she needed. Without waiting for him to finish the threat, Jordan snapped the phoned closed on Caesar and their future and dropped back into her pocket. Then took the ring from her finger and slipped it onto the thin silver chain she wore around her neck.

There was no such thing as forever. Caesar’s betrayal brought the reality of that truth home loud and clear.

After all these weeks, she was still no closer to finding forgiveness in her heart than she’d been that first night. She’d simply thrown herself into her work with a passion, signing up for double shifts at the hospital while Caesar continued to grow more impatient with each passing night he was forced to spend alone.

As the newly appointed assistant to the head of the Pediatrics Unit, dealing with heartbreaking tragedies like tonight seemed easier than making a decision about her future.

If she were being completely honest, their relationship had started to unravel long before she’d discovered his unfaithfulness. She’d simply been going through the motions, pretending everything was okay. They’d both gotten good at pretending.

She hadn’t slept more than a few minutes here and there in weeks. And those minutes had been spent in an empty hospital bed because she couldn’t go home to the apartment she shared with her brother. She hadn’t seen Jeremy in days. They’d kept in touch with each other’s lives mostly through voicemail, or short snatches of conversation between patients
.

In spite of all Caesar’s attempts at
softening her up with flowers and her favorite candy, she wasn’t ready to face him either.

Jordan wiped the last of her tears against her sleeve. The parents. She needed to break the news to the little girl’s parents. She couldn’t hide out in here forever.

She’d opened the door and headed for the elevator to face the parents when phone rang once more. She started to answer it automatically then stopped. The caller ID only served to remind her of all the reasons she was still here at this late hour. Avoiding the inevitable.