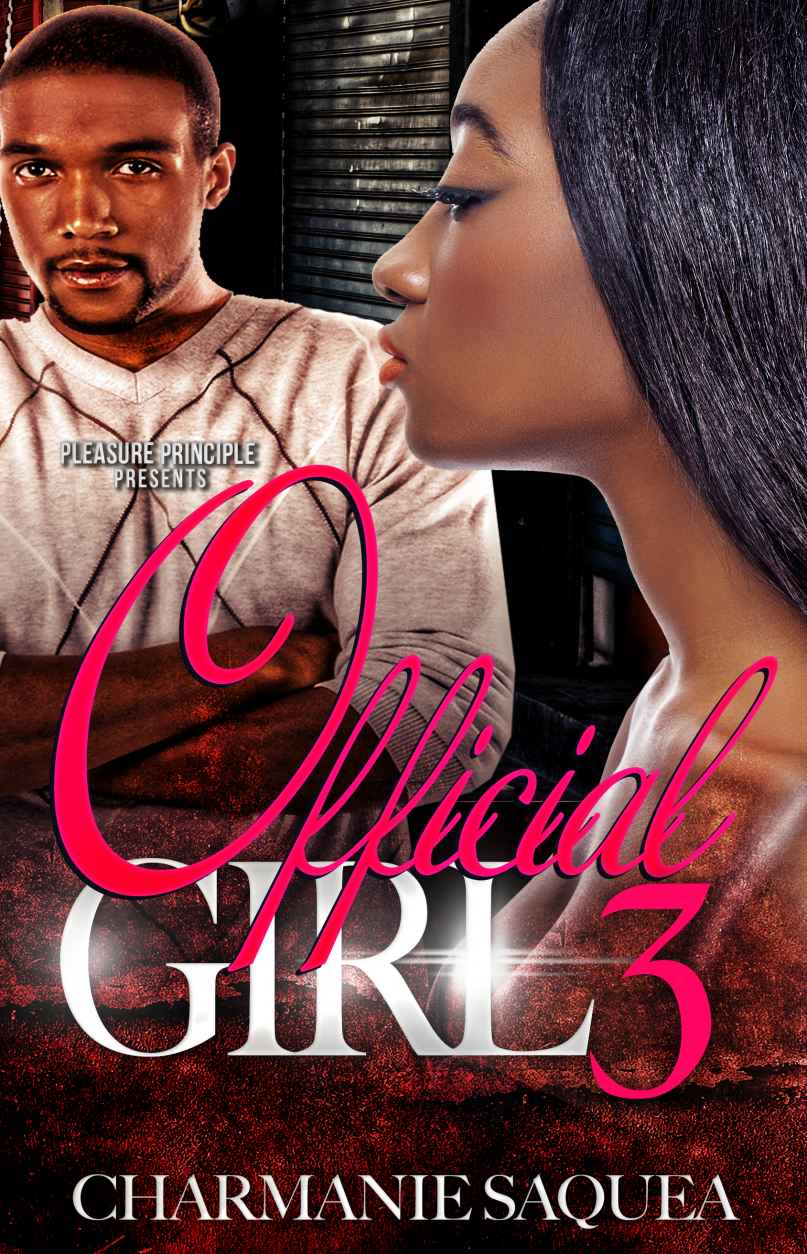 I usually don’t say nothing. I sit back and observe, I’m usually the one to think before I react. I guess you can say I’m more level headed than Mykell and Ramone but right now I’m feeling like fuck all that! They took my baby girl away from me. I loved that girl like she was really my flesh and blood, hell you couldn’t tell me that she wasn’t my blood sister.

I’ve never been the type of nigga to cry but right now I’m holding back the tears that are threatening to fall. Baby girl didn’t deserve to go out like that. Sitting here looking at my little brother
ain’t making me feel no better. He really loved Neicey, no doubting that. Yea, they had their little issues but I know for a fact that they loved each other unconditionally. I honestly think they could’ve worked that shit out but Neicey was just too damn stubborn.

“Man, this shit can’t be real. She can’t be gone
,” Mykell said bringing me from my thoughts.

“I loved that girl man. It feels like a piece of my heart been ripped out my chest
,” he stated calmly. Then the next thing I know, he started flipping, throwing things around the room. He ripped his IV out of his arm, and blood started gushing out. The doctors ran into the room to see what all the commotion was about.

“
Mr. Jones, were going to need you to calm down,” one of the doctors said.

“Fuck that! I just lost
my girl and you want me to calm down? Fuck that and fuck you!” he yelled.

Honestly, I’ve never seen my brother flip out like that. Not even when our mama died, but I guess he was too young to understand then.

Pops just got up and walked over to Kell and held his head in his arms while he cried. He was really bawling crying. The nurse took that as an opportunity to put his IV back in.

Big Ramone’s phone started ringing. He looked at it funny before he answered.

The room was silent except for Mykell
’s crying.

“That was weird. That was the doctor that worked on Reneice. He said he has something real important he needs to
speak with me about.”

“What could it be?”
my pops asked. “Do they want you to identify the body again?”

“Good question. I just want him to hurry up so I can go home and get some rest before I start making funeral arrangements. It looks like our grandsons are a little tired too
,” he said, referring to MJ and baby Romell knocked out sleep. I’m surprised they’re still sleep with all the commotion their dad just made.

Five minutes later, a doctor walked into the room. “Hello, my name is Doctor Hall and I worked on Ms. Reneice Peak when she got here. As you know
, about an hour ago, I pronounced her dead but it looks like Ms. Peak wasn’t ready to go just yet.”

I damn near fell out when he said that.
So Neicey’s not dead?

I know
good and damn well this doctor better not be in here fucking with a nigga’s emotions. “So you’re telling me that she’s not dead? She still alive?” I asked with a little hope in my voice.

“Well yes and no.
She did die, but someway her heart started beating again but it was real faint. We waited a little to see if she would stay with us, her heartbeat started to fade again so I took it upon myself to put her on a life support machine until I got the chance to talk to you all,” he explained.

“So she alive but the machine is helping her breath?” Micah asked.

“Yes, she also slipped into a coma when her heart started beating again.”

“Mack, go get your sister and Ramone. We are going to make this decision as a family
,” Pops ordered.

“Pops, Big Mone, I think we should keep her on the life support. She came back to us for a reason
,” I thought.

Lani and Ramone walked into the room and I could tell both of them had been crying. The doctor told them everything he had explained to us.

“YES!” me, Mack and Mone yelled at the same time.

He tried to walk out the room but I stopped him.

“Are you supposed to be up and moving?” he asked looking concerned.

“No but I really want to see her, just for a minute. Please?” I begged.

“Alright, just for a minute. Then you need to get some rest.
”

I walked into Neicey’s room and was devastated by what I saw. She had tubes running out of her and she looked pale. She looked like she was sleeping peacefully but I just wanted her to wake up so I could see her beautiful smile with those dimples I love so much.

“I can’t really say, some people stay in a coma for days, weeks, months, maybe even years.”

I went over to the bed and leaned down to kiss her. I wanted to cry so bad because she looked dead. I never been the type of nigga to cry but this shit was getting to me.

“I love you Ma.” I said before leaving the room.

That muthafucka gon pay for this shit, no doubt about it.

I was so shocked but overjoyed at the news the doctor just gave us. I knew my Ladybug was a fighter, she was too stubborn to die. We decided that we would let Mykell go see her first and spend some time with her. That was his moment.

From what I heard, that bitch nigga Kamil got away. I hope he had enough sense to leave the fuckin country because
me, my niggas and my brothers are gunning for that nigga’s head. He got my damn sister laying in a damn coma.

I want to hear the whole story from Kell about what happened earlier but I’ll wait until tomorrow. Right now everybody just needs some rest. The person I really need to be talking to right now is Le’Lani. She dropped a
big bomb on me a little while ago and I wanted to see what was up with her.

“Alri
ght y’all, I’ll be back up here tomorrow to check on Kell and Ladybug. If anything changes or happens, call me immediately.”

“We will son. You just go home and get some rest. Today has been a very long and eventful day
,” Pops said.

“You want me to take MJ or Romell home with us?”

“We’ll be fine, you father is taking Baby Mell and I got MJ.”

I wasted no time shooting off questions as soon as we got in the car.

“How long have you known? How far along are you? When is your next doctor’s appointment? Don’t you have to take those pills Ladybug took when she was pregnant?”

“Slow down baby,” she laughed for the first time that night. “I haven’t even been to the doctor’s yet. I took a pregnancy test at home and it came back positive.”

“When you wake up tomorrow
, yo ass better call the doctor’s to make sure everything is okay and see how far along we are.”

“Yes, we. The last time I checked we made that baby
together
so therefore we’re in this together,” I said shocking her and myself.

The next morning Lani
and I went up to the hospital bright and early.

“Who you wanna see first?” I asked as we pulled up to the hospital.

We made our way to the third floor to see my Ladybug.
This shit is too much like déjà vu, every time I come to this hospital, it’s for my sister.

Lani opened up the curtains to let some sunlight in the room while I went to sit by my sister’s side to talk to her. I’ve been told that they can hear everything you say
, they just can’t respond.

“Hey Ladybug, that was some scary shit you pulled. I thought I had really lost you. You just don’t know how crazy a nigga was going when the doctor told us you were gone. I know we’ve had some good times and some bad also
, but through it all we remained close.

“
I’ve never told you, but I was scared as hell when I took you in after Mama passed. I was just growing up myself and I didn’t want to teach you the wrong things or be a bad influence on you. But you turned out real good, better than I expected. I don’t regret doing it either, raising you was probably one of the best and most positive things I’ve ever done in my life. I probably don’t tell you enough, but I really am proud of you and the woman you’ve become Ladybug, I really am. Well that’s enough jibber jabber from me.”

I got up so Lani could be closer to her.

“Baby, you just go up and see Kell. I think Imma stay down here for a while. I’ll meet you up there.

I walked out that room feeling like shit, honestly. It’s my job to protect my sister and look at what I let happen to her. It’s killing me to see my sister like that.

Just looking at my sister laying in this bed hooked up to a machine is killing me but I have no worries. I know she’s going to make it because she’s a fighter, her stubborn ass would never leave here and allow Mykell to let another bitch raise her kids. I chuckled at the thought, Reneice would come back and haunt both of their asses.

“Mami, you remember the first day we met? It was like we were meant to be best friends.” I laughed at the memory.

I was walking through the mall with texting on my phone when I accidently bumped into somebody. “Damn, bitch! Watch where the fuck you going,” I heard a voice say.

I looked up to see three ratchet looking females standing there looking like they didn’t even belong in this mall.

“Hold up, you don’t know me so watch who you calling a bitch,” I said walking up on their asses. Hell, I wasn’t scared to fight nobody. I grew up in a house with two older brothers who taught me very well how to defend myself.

“Bitch you will get you ass beat.” Never being one to do too much talking, I threw the first punch. We went at it, then all of a sudden one of her friends decided to get bold and jump in. I didn’t care though, it wasn’t the first time I was jumped and probably wouldn’t be the last. I never realized that someone was helping me until the mall security and Micah came and broke it up. I caught the end of the other girl putting a beat down on the ratchet pack’s friend. I was pretty impressed.

“She’s with me,” I said when security grabbed her.

“If you don’t leave now, I will call the police,” the damn fake ass robo cop said.

“Whatever, c’mon girl,” I said picking up my bags and handing them to Micah.

“Reneice but people call me Neicey,” she said.

“Well I’m Mack and this is Lani. You need us to drop you off somewhere or you good?” he asked.

“I’m good but thank you anyways,” she said.

“Thanks for looking out back there, that was some real shit you did,” I said.