Read Out of Place: A Memoir Online

Out of Place: A Memoir 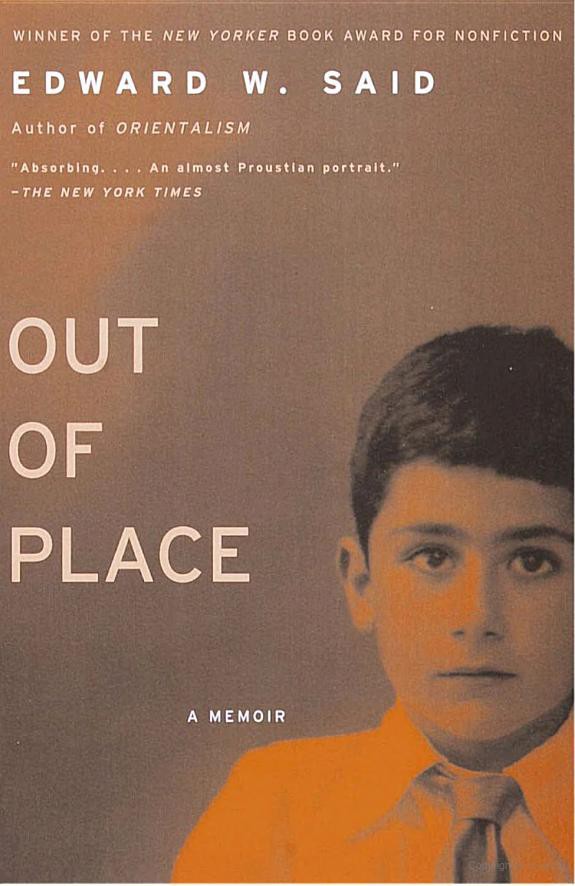 ACCLAIM FOR EDWARD W. SAID’S
Out of Place

“A voyage into a cruel, luxuriant, mysterious land called childhood, which makes Orientalists of us all.”

“Said is
in place
among the truly important intellects of our century. His examined life, from the tragic and triumphant perspective of a mortal illness, is superbly worth living. I know I shall not read a work to match this one this year, or for many years.”

“
Out of Place
is an intensely moving act of reclamation and understanding, a portrait of a transcultural and often painful upbringing written with wonderful vividness and unsparing honesty.”

“As an emotional document,
Out of Place
is a revelation.… The deeply affecting testimony of one boy’s nearly relentless persecution by the world.”

“A powerful, and, at the most fundamental level, a thoroughly convincing statement about a man who has helped to illuminate our crisis-ridden world with its contradictions and complexities.”

“
Out of Place
comes as a bolt from the blue, a dream come true. Vividly portrayed in this work is Edward Said’s path to self-realization, making him one of this fin de siècle’s most indispensable intellectuals.”

“The vivid portrait of a brilliant, vulnerable boy growing up in a complicated and callous world.… An undoubtedly valuable glimpse into the life of a great man.”

“Ultimately, Mr. Said’s book is about the mysterious … inner power that enables some people to overcome the stunting influences of their childhoods and stubbornly keep growing toward a light, at first dimly and intermittently glimpsed, that is their destiny to reach.”

EDWARD W. SAID
Out of Place

Edward W. Said is University Professor of English and Comparative Literature at Columbia University. He is the author of twenty books, including
Orientalism
, which was nominated for a National Book Critics Circle Award,
Culture and Imperialism
, and
The Edward Said Reader
.

Joseph Conrad and the Fiction of Autobiography
Beginnings: Intention and Method
Orientalism
The Question of Palestine
Literature and Society
(editor)
The World, the Text, and the Critic
After the Last Sky
(with Jean Mohr)
Blaming the Victims
Musical Elaborations
Culture and Imperialism
The Politics of Dispossession
Representations of the Intellectual
Peace and Its Discontents
Covering Islam
The Pen and the Sword
Entre guerre et paix
The End of the Peace Process
The Edward Said Reader

Vintage and colphon are registered trademarks of Random House, Inc.

THIS BOOK WAS WRITTEN MOSTLY DURING PERIODS OF ILLNESS
or treatment, sometimes at home in New York, sometimes while enjoying the hospitality of friends or institutions in France and Egypt. I began to work on
Out of Place
in May 1994 while I was recovering from three early rounds of chemotherapy for leukemia. With unstinting kindness and patience Dale Janson and the superb nurses of the Ambulatory Chemotherapy and Transfusion Unit at Long Island Jewish Hospital took care of me for the days, weeks, and months I spent in their charge until I finished writing.

My family—Mariam, Wadie, Najla—bore with me throughout the five years of work on my manuscript, plus of course my illnesses, absences, treatments, and my generally all-round state of being hard to put up with. Their humor, unconditional support, and strength made the whole thing easier to live through, for me if not always for them, and I am profoundly thankful.

My dear friend Richard Poirier, surely America’s finest literary critic, gave me early encouragement and read through various drafts, as did Deirdre and Allen Bergson. To them I am genuinely indebted. To Zaineb Istrabadi, my excellent assistant at Columbia, must go a prize for deciphering my handwriting, reproducing it for me in readable form, helping with numerous drafts, and always without impatience or a
disagreeable word. Sonny Mehta gave me his friendship and support, a rare publisher and comrade. Once again I would like to thank Andrew Wylie for seeing this work through from start to finish.

It is customary, even routine, to thank one’s editors. In my case there is nothing pro forma about the feelings of affection, admiration, and gratitude I have for my friends Frances Coady of Granta and Shelley Wanger of Knopf. Frances helped me to see what I was trying to do, then made the most acute suggestions for sculpting a bulky, disorderly manuscript into a semblance of form. Always patiently and humorously, Shelley sat with and guided me as we went through hundreds of pages of often overwritten and inchoate prose.

Dr. Kanti Rai’s redoubtable medical expertise and remarkable humanity kept me going while I wrote and eventually finished this book. From the beginning of my illness, he and Mariam Said cooperated benignly, and literally kept me from sinking. I gratefully dedicate this book to Mariam for her loving support and to Kanti for his humane skill and friendship.

Out of Place
IS A RECORD OF AN ESSENTIALLY LOST OR FORGOTTEN
world. Several years ago I received what seemed to be a fatal medical diagnosis, and it therefore struck me as important to leave behind a subjective account of the life I lived in the Arab world, where I was born and spent my formative years, and in the United States, where I went to school, college, and university. Many of the places and people I recall here no longer exist, though I found myself frequently amazed at how much I carried of them inside me in often minute, even startlingly concrete, detail.

My memory proved crucial to my being able to function at all during periods of debilitating sickness, treatment, and anxiety. Almost daily, and while also writing other things, my rendezvous with this manuscript supplied me with a structure and a discipline at once pleasurable and demanding. My other writing and my teaching seemed to take me far away from the various worlds and experiences of this book: clearly one’s memory operates better and more freely when it isn’t goaded into service by devices or activities deigned for that purpose. Yet my political writings about the Palestinian situation, my studies of the relationship of politics and aesthetics, specifically opera and prose fiction, and my fascination with the subject of a book I have been writing on late style (beginning with Beethoven and Adorno) must surely have fed into this memoir surreptitiously.

After I finished the manuscript, I made a trip to Jerusalem and then to Cairo in November 1998: I stayed in the former while I attended a conference on Palestinian landscape held at Bir Zeit, and I journeyed to Egypt to participate in the doctoral thesis defense of a gifted student of mine who teaches at Tanta University, fifty miles north of Cairo. I discovered anew that what had been a network of towns and villages in which all the members of my extended family had once lived was now a series of Israeli locales—Jerusalem, Haifa, Tiberias, Nazareth, and Acre—where the Palestinian minority lives under Israeli sovereignty. In parts of the West Bank and Gaza, Palestinians had self-rule or autonomy, but the Israeli army retained overall security control, nowhere more starkly than at borders, checkpoints, and airports. One of the routine questions I was asked by Israeli officials (since my U.S. passport indicated that I was born in Jerusalem) was exactly when after birth I had left Israel. I responded by saying that I left
Palestine
in December 1947, accenting the word “Palestine.” “Do you have any relatives here?” was the next question, to which I answered, “No one,” and this triggered a sensation of such sadness and loss as I had not expected. For by the early spring of 1948 my entire extended family had been swept out of the place, and has remained in exile ever since. In 1992, however, I was able for the first time since our departure in 1947 to visit the family-owned house where I was born in West Jerusalem, as well as the house in Nazareth that my mother grew up in, and my uncle’s house in Safad, and so on. All of them had new occupants now, which for tremendously inhibiting and unspecifiable emotional reasons made it very hard and actually impossible for me to enter them once again, even for a cursory look.

While in Cairo during my November 1998 trip, I went to pay a call on our old neighbors Nadia and Huda, and their mother, Mrs. Gindy, who for many years lived three floors below us, on the second floor at 1 Sharia Aziz Osman. They told me that number 20, our old apartment, was empty and up for sale, but, having thought about it for a moment after they suggested buying it back, I felt no enthusiasm for reacquiring a place we had vacated almost forty years ago. A moment later Nadia and Huda said that before we had lunch, there was somebody waiting for me in the kitchen. Would I like to see him? A small, wiry man in the dark robe and turban of a formally dressed Upper Egyptian peasant
came into the room. When told by the two women that this was the Edward he had patiently been waiting to see, he drew back, shaking his head. “No, Edward was tall, and he wore glasses. This isn’t Edward.” I had quickly recognized Ahmad Hamed, our
suffragi
(butler) for almost three decades, an ironic, fanatically honest and loyal man whom we had all considered a member of the family. I then tried to persuade him that it was indeed me, changed by illness and age, after thirty-eight years of absence. Suddenly we fell into each other’s arms, sobbing with the tears of happy reunion and a mourned, irrecoverable time. He talked about how he had carried me on his shoulders, how we had chatted in the kitchen, how the family celebrated Christmas and New Year’s, and so on. I was astounded that Ahmad minutely remembered not only the seven of us—parents and five children—but also each of my aunts, uncles, and cousins, and my grandmother, in addition to a few family friends. And then, as the past poured out of him, an old man retired to the distant town of Edfu near Aswan, I knew again how fragile, precious, and fleeting were the history and circumstances not only gone forever, but basically unrecalled and unrecorded except as occasional reminiscence or intermittent conversation.

The Glass Room (Vera Stanhope 5) by Ann Cleeves
Evil Ways by Justin Gustainis
Misty Lake: Book One in the Misty Lake Series by Margaret Standafer
The Locker Room by Amy Lane
The Broken Kingdoms by Jemisin, N. K.
Doctor Who: The Gunfighters by Donald Cotton
Poisoned Tarts by G.A. McKevett
Bewitched & Betrayed by Shearin, Lisa
Hold Me by Talia Ellison
My Guru & His Disciple by Christopher Isherwood