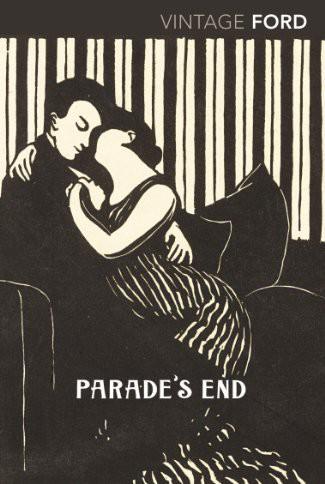 A Man Could Stand Up—

Christopher Tietjens has long loved the beautiful young suffragette Valentine, but the pair are held apart by Christopher’s loyalty to his wife Sylvia, despite her callous infidelities, and to a set of principles which belong to an old world, and which are about to be swallowed up in the mud and chaos of the Western Front. This majestic four-part novel is one of the finest achievements of nineteenth century literature.

Ford Madox Ford was born on 17 December 1873 in Merton, Devon. He began writing in the 1890s and both his fiction and his criticism are celebrated. His most famous works are
The Good Soldier
(1915) and
Parade’s End
(1924–8). Ford’s other major contribution to literature was the foundation of the
English Review
in which he published Thomas Hardy, Joseph Conrad, H. G. Wells, Henry James and gave debuts to Wyndham Lewis and D.H. Lawrence. He also founded the
Transatlantic Review
in 1924. Ford changed his surname from Hueffer in 1919 after serving in the British army in France during the First World War. After 1927 Ford lived in the United States and France. He died in Deauville on 26 June 1939.

THE TWO YOUNG
men – they were of the English public official class – sat in the perfectly appointed railway carriage. The leather straps to the windows were of virgin newness; the mirrors beneath the new luggage racks immaculate as if they had reflected very little; the bulging upholstery in its luxuriant, regulated curves was scarlet and yellow in an intricate, minute dragon pattern, the design of a geometrician in Cologne. The compartment smelt faintly, hygienically of admirable varnish; the train ran as smoothly – Tietjens remembered thinking – as British gilt-edged securities. It travelled fast; yet had it swayed or jolted over the rail joints, except at the curve before Tonbridge or over the points at Ashford where these eccentricities are expected and allowed for, Macmaster, Tietjens felt certain, would have written to the company. Perhaps he would even have written to
The Times
.

Their class administered the world, not merely the newly created Imperial Department of Statistics under Sir Reginald Ingleby. If they saw policemen misbehave, railway porters lack civility, an insufficiency of street lamps, defects in public services or in foreign countries, they saw to it, either with nonchalant Balliol voices, or with letters to
The Times
, asking in regretful indignation: ‘Has the British This or That come to
this
!’ Or they wrote, in the serious reviews of which so many still survived, articles taking under their care, manners, the Arts, diplomacy, inter-Imperial trade, or the personal reputations of deceased statesmen and men of letters.

Macmaster, that is to say, would do all that: of himself Tietjens was not so certain. There sat Macmaster; smallish; Whig; with a trimmed, pointed black beard, such as a smallish man might wear to enhance his already
germinated
distinction; black hair of a stubborn fibre, drilled down with hard metal brushes; a sharp nose; strong, level teeth; a white, butterfly collar of the smoothness of porcelain; a tie confined by a gold ring, steel-blue speckled with black – to match his eyes, as Tietjens knew.

Tietjens, on the other hand, could not remember what coloured tie he had on. He had taken a cab from the office to their rooms, had got himself into a loose, tailored coat and trousers, and a soft shirt, had packed quickly, but still methodically, a great number of things in an immense two-handled kit-bag, which you could throw into a guard’s van if need be. He disliked letting that ‘man’ touch his things; he had disliked letting his wife’s maid pack for him. He even disliked letting porters carry his kit-bag. He was a Tory – and as he disliked changing his clothes, there he sat, on the journey, already in large, brown, hugely welted and nailed golf boots, leaning forward on the edge of the cushion, his legs apart, on each knee an immense white hand – and thinking vaguely.

Macmaster, on the other hand, was leaning back, reading some small, unbound printed sheets, rather stiff, frowning a little. Tietjens knew that this was, for Macmaster, an impressive moment. He was correcting the proofs of his first book.

To this affair, as Tietjens knew, there attached themselves many fine shades. If, for instance, you had asked Macmaster whether he were a writer, he would have replied with the merest suggestion of a deprecatory shrug.

‘No, dear lady!’ for of course no man would ask the question of anyone so obviously a man of the world. And he would continue with a smile: ‘Nothing so fine! A mere trifler at odd moments. A critic, perhaps. Yes! A little of a critic.’

Nevertheless Macmaster moved in drawing-rooms that, with long curtains, blue china plates, large-patterned wallpapers and large, quiet mirrors, sheltered the longhaired of the Arts. And, as near as possible to the dear ladies who gave the At Homes, Macmaster could keep up the talk – a little magisterially. He liked to be listened to with respect when he spoke of Botticelli, Rossetti,
and
those early Italian artists whom he called ‘The Primitives.’ Tietjens had seen him there. And he didn’t disapprove.

For, if they weren’t, these gatherings, Society, they formed a stage on the long and careful road to a career in a first-class Government office. And, utterly careless as Tietjens imagined himself of careers or offices, he was, if sardonically, quite sympathetic towards his friend’s ambitiousnesses. It was an odd friendship, but the oddnesses of friendships are a frequent guarantee of their lasting texture.

The youngest son of a Yorkshire country gentleman, Tietjens himself was entitled to the best – the best that first-class public offices and first-class people could afford. He was without ambition, but these things would come to him as they do in England. So he could afford to be negligent of his attire, of the company he kept, of the opinions he uttered. He had a little private income under his mother’s settlement; a little income from the Imperial Department of Statistics; he had married a woman of means, and he was, in the Tory manner, sufficiently a master of flouts and jeers to be listened to when he spoke. He was twenty-six; but, very big, in a fair, untidy, Yorkshire way, he carried more weight than his age warranted. His chief, Sir Reginald Ingleby, when Tietjens chose to talk of public tendencies which influenced statistics, would listen with attention. Sometimes Sir Reginald would say: ‘You’re a perfect encyclopædia of exact material knowledge, Tietjens,’ and Tietjens thought that that was his due, and he would accept the tribute in silence.

At a word from Sir Reginald, Macmaster, on the other hand, would murmur: ‘You’re very good, Sir Reginald!’ and Tietjens thought that perfectly proper.

Macmaster was a little the senior in the service as he was probably a little the senior in age. For, as to his roommate’s years, or as to his exact origins, there was a certain blank in Tietjens’ knowledge. Macmaster was obviously Scotch by birth, and you accepted him as what was called a son of the manse. No doubt he was really the son of a grocer in Cupar or a railway porter in Edinburgh. It does not matter with the Scotch, and as he was very properly reticent as to his ancestry, having accepted him, you didn’t, even mentally, make any enquiries.

Tietjens always had accepted Macmaster – at Clifton, at Cambridge, in Chancery Lane and in their rooms at Gray’s Inn. So for Macmaster he had a very deep affection – even a gratitude. And Macmaster might be considered as returning these feelings. Certainly he had always done his best to be of service to Tietjens. Already at the Treasury and attached as private secretary to Sir Reginald Ingleby, whilst Tietjens was still at Cambridge, Macmaster had brought to the notice of Sir Reginald Tietjens’ many great natural gifts, and Sir Reginald, being on the lookout for young men for his ewe lamb, his newly-found department, had very readily accepted Tietjens as his third in command. On the other hand, it had been Tietjens’ father who had recommended Macmaster to the notice of Sir Thomas Block at the Treasury itself. And indeed, the Tietjens family had provided a little money – that was Tietjens’ mother really – to get Macmaster through Cambridge and install him in Town. He had repaid the small sum – paying it partly by finding room in his chambers for Tietjens when in turn he came to Town.

With a Scots young man such a position had been perfectly possible. Tietjens had been able to go to his fair, ample, saintly mother in her morning-room and say:

‘Look here, mother, that fellow Macmaster! He’ll need a little money to get through the University,’ and his mother would answer:

With an English young man of the lower orders that would have left a sense of class obligation. With Macmaster it just didn’t.

During Tietjens’ late trouble – for four months before Tietjens’ wife had left him to go abroad with another man – Macmaster had filled a place that no other man could have filled. For the basis of Christopher Tietjens’ emotional existence was a complete taciturnity – at any rate as to his emotions. As Tietjens saw the world, you didn’t ‘talk’. Perhaps you didn’t even think about how you felt.

And, indeed, his wife’s flight had left him almost completely without emotions that he could realise, and he had not spoken more than twenty words at most about the event. Those had been mostly to his father, who, very tall, very largely built, silver-haired and erect, had drifted, as
it
were, into Macmaster’s drawing-room in Gray’s Inn, and after five minutes of silence had said:

‘No! No one but a blackguard would ever submit a woman to the ordeal of divorce.’

Mr. Tietjens had suggested that, and after an interval had asked:

‘You will permit her to divorce you?’

‘If she wishes it. There’s the child to be considered.’

‘You will get her settlement transferred to the child?’

‘If it can be done without friction.’

Mr. Tietjens had commented only:

‘Ah!’ Some minutes later he had said:

‘Your mother’s very well.’ Then: ‘That motor-plough
didn’t
answer,’ and then: ‘I shall be dining at the club.’

‘May I bring Macmaster in, sir? You said you would put him up.’

‘Yes, do. Old General ffolliott will be there. He’ll second him. He’d better make his acquaintance.’ He had gone away.

Tietjens considered that his relationship with his father was an almost perfect one. They were like two men in the club – the
only
club; thinking so alike that there was no need to talk. His father had spent a great deal of time abroad before succeeding to the estate. When, over the moors, he went into the industrial town that he owned, he drove always in a coach-and-four. Tobacco smoke had never been known inside Groby Hall: Mr. Tietjens had twelve pipes filled every morning by his head gardener and placed in rose bushes down the drive. These he smoked during the day. He farmed a good deal of his own land; had sat for Holdernesse from 1878 to 1881, but had not presented himself for election after the redistribution of seats; he was patron of eleven livings; rode to hounds every now and then, and shot fairly regularly. He had three other sons and two daughters, and was now sixty-one.

To his sister Effie, on the day after his wife’s elopement, Christopher had said over the telephone:

The Wasted Vigil by Nadeem Aslam
Accuse the Toff by John Creasey
Captive Hearts by Teresa J. Reasor
Stroke of Midnight by Sherrilyn Kenyon, Amanda Ashley, L. A. Banks, Lori Handeland
A Fistful of Horror - Tales Of Terror From The Old West by Kevin G. Bufton (Editor)
Amazon Companion by Roseau, Robin
Green Girl by Sara Seale
Extra Lives by Tom Bissell
The Abrupt Physics of Dying by Paul E. Hardisty
Concerto to the Memory of an Angel by Eric-Emmanuel Schmitt