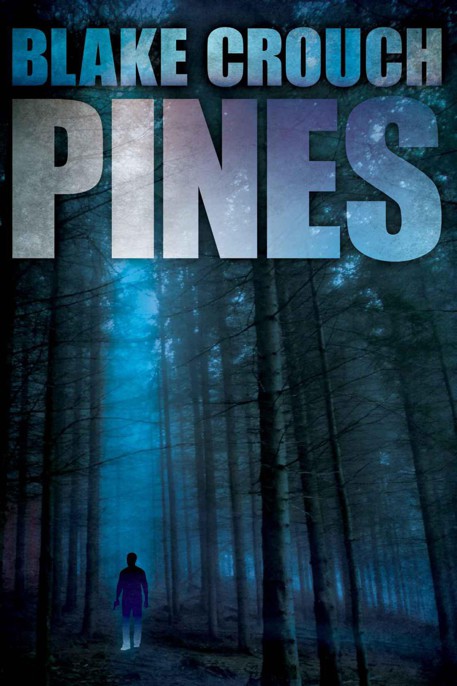 Despite evidence that human evolution still functions, biologists concede that it’s anyone’s guess where it will take us from here.

Just because you’re paranoid doesn’t mean they aren’t after you.

He came to lying on his back with sunlight pouring down into his face and the murmur of running water close by. There was a brilliant ache in his optic nerve, and a steady, painless throbbing at the base of his skull—the distant thunder of an approaching migraine. He rolled onto his side and pushed up into a sitting position, tucking his head between his knees. Sensed the instability of the world long before he opened his eyes, like its axis had been cut loose to teeter. His first deep breath felt like someone driving a steel wedge between the ribs high on his left side, but he groaned through the pain and forced his eyes to open. His left eye must have been badly swollen, because it seemed like he was staring through a slit.

The greenest grass he’d ever seen—a forest of long, soft blades—ran down to the bank. The water was clear and swift as it flowed between the boulders that jutted out of the channel. Across the river, a cliff swept up for a thousand feet. Pines grew in clusters along the ledges, and the air was filled with the smell of them and the sweetness of the moving water.

He was dressed in black pants and a black jacket with an oxford shirt underneath, the white cotton speckled with blood. A black tie hung by the flimsiest knot from his collar.

On his first attempt to get up, his knees buckled and he sat down hard enough to send a vibration of searing pain through his rib cage. His second try succeeded, and he found himself wobbly but standing, the ground a pitching deck beneath his feet. He turned slowly, his feet shuffling and spread wide for balance.

With the river behind him, he stood at the edge of an open field. On the far side, the metal surfaces of swing sets and sliding boards glimmered under an intense, midday sun.

Not another soul around.

Beyond the park, he glimpsed Victorian houses, and farther on, the buildings of a main street. The town was at most a mile across, and it sat in the middle of an amphitheater of stone, enclosed by cliff walls rising several thousand feet on every side and composed of red-banded rock. In the highest, shadowed mountain nooks, pockets of snow lingered, but down here in the valley, it was warm, the sky above a deep and cloudless cobalt.

The man checked the pockets of his slacks, and then of his single-breasted coat.

No wallet. No money clip. No ID. No keys. No phone.

Just a small Swiss Army knife in one of the inner pockets.

By the time he’d reached the other side of the park, he was more alert and more confused, and the pulsing in his cervical spine wasn’t painless any longer.

The name of the current president.

What his mother’s face looked like, though he couldn’t recall her name or even the sound of her voice.

That he could play the piano.

And fly a helicopter.

That he was thirty-seven years old.

And that he needed to get to a hospital.

Outside those facts, the world and his place in it wasn’t so much hidden as printed in a foreign nomenclature beyond
his comprehension. He could sense the truth hovering on the outskirts of consciousness, but it lay just out of reach.

He walked up a quiet residential street, studying every car he passed. Did one of them belong to him?

The houses that faced each other were pristine—freshly painted with perfect little squares of bright grass framed by picket fences and each household name stenciled in white block letters on the side of a black mailbox.

In almost every backyard, he saw a vibrant garden, bursting not only with flowers but vegetables and fruit.

All the colors so pure and vivid.

Midway through the second block, he winced. The exertion of walking had drawn a deep breath out of him, the pain in his left side stopping him in his tracks. Removing his jacket, he pulled his oxford out of his waistline, unbuttoned the shirt, and opened it. Looked even worse than it felt—all down his left side stretched a dark purple bruise, bull’s-eyed with a swath of jaundiced yellow.

Something had hit him. Hard.

He ran his hand lightly over the surface of his skull. The headache was there, becoming more pronounced by the minute, but he didn’t feel any signs of severe trauma beyond tenderness on the left side.

He buttoned his shirt back, tucked it into his pants, and continued up the street.

The blaring conclusion was that he’d been involved in some sort of accident.

Maybe a car. Maybe a fall. Maybe he’d been attacked—that could explain why he carried no wallet.

He should go to the police first thing.

What if he’d done something wrong? Committed a crime?

Maybe he should wait, see if anything came back to him.

Though nothing about this town struck him as remotely familiar, he realized, as he stumbled up the street, that he was reading the name on every mailbox. A subconscious thing? Because down in the recesses of memory he knew that one of these mailboxes would have
his
name printed across the side? And that seeing it would bring everything back?

The buildings of downtown lifted above the pines several blocks ahead, and he could hear, for the first time, the noise of cars in motion, distant voices, the hum of ventilation systems.

He froze in the middle of the street, involuntarily cocking his head.

He was staring at a mailbox that belonged to a red-and-green two-story Victorian.

Staring at the name on the side of it.

His pulse beginning to accelerate, although he didn’t understand why.

The name meant nothing to him.

But the first syllable did. Or rather, it prompted some emotional response.

Was he Mack? Was that his first name?

The way the word rolled off his tongue, it wasn’t natural. Didn’t feel like anything that belonged to him. If he was honest, he hated the word, because it conjured up...

How strange. For some reason, the word instilled fear.

Had someone named Mack hurt him?

Three more blocks brought him to the corner of Main and Sixth Street, where he sat down on a shaded bench and took a slow, careful breath. He looked up and down the street, eyes desperate for anything familiar.

Not a chain store in sight.

There was a pharmacy catty-corner from where he sat.

A café next door.

A three-story building next to the café with a sign overhanging the stoop:

The smell of coffee beans pulled him off the bench. He looked up, saw a place called the Steaming Bean halfway up the block that had to be the source.

Wasn’t necessarily the most useful piece of knowledge, all things considered, but it dawned on him that he loved good coffee. Craved it. Another tiny piece of the puzzle that constituted his identity.

He walked to the coffee shop and pulled open the screened door. The shop was small and quaint, and just by the smell of things, he could tell they brewed great product. A bar down the right side faced espresso machines, grinders, blenders, bottles of flavor shots. Three stools were occupied. A few sofas and chairs lined the opposite wall. A bookshelf of faded paperbacks. Two old-timers were at war on a chessboard with mismatched pieces. The walls displayed local artwork—a series of black-and-white self-portraits of some middle-aged woman whose expression never changed from photo to photo. Only the focus of the camera changed.

He approached the cash register.

When the twentysomething barista with blonde dreadlocks finally noticed him, he thought he detected a flicker of horror in her pretty eyes.

Does she know me?

In a mirror behind the register he caught his reflection and immediately understood what had prompted her look of disgust—the left side of his face was blanketed in a massive bruise, and his left eye bulged, nearly swollen shut.

My God. Someone beat the shit out of me.

Aside from his hideous bruise, he wasn’t bad looking. Figured he stood six feet tall, maybe six-one. Short black hair, and a two-day beard coming in like a shadow across the lower half of his face. A solid, muscular build evident in the way his jacket hung on his shoulders and the taut stretch of the oxford across his chest. He thought he looked like some advertising or marketing exec—probably cut a damn striking profile when he was shaved and polished up.

“What can I get for you?” the barista asked.

He might’ve killed for a cup of coffee, but he didn’t have a dime to whatever his name was.

The woman seemed confused by the question.

“This is the only coffee shop in town, but yeah, our coffee kicks ass.”

The man leaned over the counter. “Do you know me?” he whispered.

“Do you recognize me? Do I ever come in here?”

“You don’t know if you’ve been in here before?”

She studied him for a moment, as if appraising his candor, trying to determine if this guy with a battered face was crazy or messing with her.

She finally said, “I don’t think I’ve seen you before.”

“You’re sure about that.”

“Well, it’s not like this is New York City.”