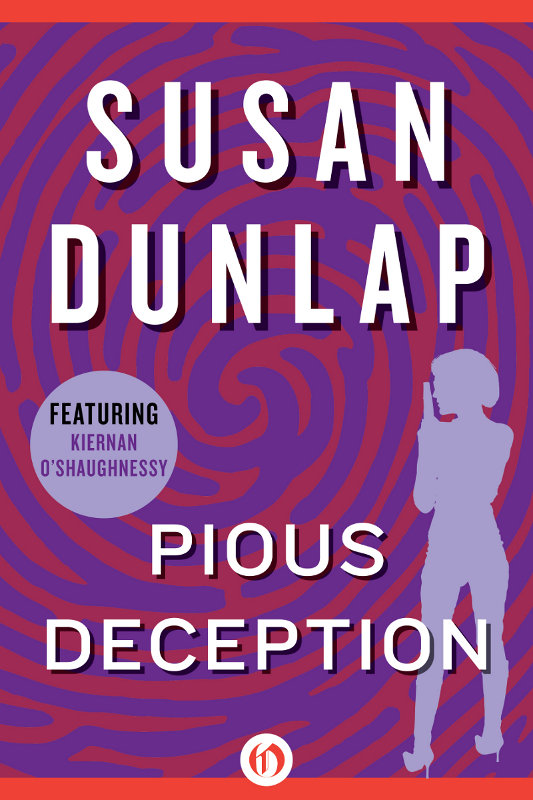 For my cousin Marge, with love and thanks

A Biography of Susan Dunlap

W
ITH THANKS TO CHIEF
Deputy Coroner Tom Siebe, Sonoma County, for his expertise, his patience, and his understanding of the requirements of fiction.

To Dr. Winfield Danielson, John Arndt, and Beth Edelstein for their special expertise and suggestions.

And to Bernadette and Douglas Croy for their unique observations.

L
IKE A TOMATO ON
a grill. That’s how the sun looked. And that’s how Auxiliary Bishop Raymond Dowd felt.

Seven o’clock at night. A hundred and two degrees. Dammit, where were the clouds? Even the gritty swirls of a dust storm would be better than this—the sun scraping his skin raw, the hot air seething up through the cracked ground, pasting his pants to his ass. Tamarisk plumes, the honey mesquite leaves, the row of palms: might as well be sticks for all the shade they gave. He eyed the cool dark of Mission San Leo fifty yards ahead. Once he would have loped that distance. But thirty years of the priesthood, thirty years of too much good food, too many Christmas bottles, had put an end to that.

He hated Phoenix, the latter-day Wild West. He hated the heat, the sand, the dusty air that kept his throat dry morning to night. But mostly he hated the lack of tradition. Mission San Leo. Look at it: white stucco, plain dark wood, simple mission church of the padres! Ha! The present church was built in 1968! Instant Catholic history! At least in ’68 it had stood alone among yucca and century plants and saguaro cacti. Then there had been a chance to imagine the mission as it might have been a hundred years before. Not now. The Phoenician suburbs had sprung up to mock it. Azure Acres Homes—three-bedroom, one-bath, cinder-block shoeboxes—all around it. On the corner a pseudo-Elizabethan shopping mall. Damned bell at the self-service pump rang louder than the one at the church.

They had told him he’d get used to the heat. Ha! Thirty years and it still pressed on his shoulders, on his paun—, his
girth,
as if every degree weighed a pound. Pushing a lock of damp chestnut hair off his ruddy forehead, he slogged on. A familiar acrid smell floated by. Was that incense coming from the church? Was young Vanderhooven conducting a mass in there at this hour on a Wednesday night?
He
had set the mass schedule for all his parishes. Vanderhooven had no business changing it here. Damn uppity kid!

From the beginning he’d known Vanderhooven would be trouble. He’d been suspicious when Bishop Medlin told him his brother’s godson wanted to come out from New York. And when Archbishop Groom called from back there—“Got a coup for you, Dowd! Young man with great recommendations from the seminary. Spent a year at Columbia in graduate school—finance. Father’s in finance—Vanderhooven and Kline, you know. Good Catholic family”—he knew he’d been thrown a spitter. If Vanderhooven was such a catch, why hadn’t they kept him in New York? If Vanderhooven had such a good,
rich
Catholic family, why hadn’t he pulled strings to stay in New York? What had been the matter with him? Or, worse yet, who would he be reporting to? How much would he tell them?

Archbishop Groom had ended his call with the clincher: Vanderhooven had the makings of a suitable secretary—
when Dowd became archbishop here
was unspoken, but the implication was clear. Equally clear was the penalty for objecting. Future archbishops were team players. Dowd had accepted Vanderhooven, but he hadn’t been fooled.

The breeze picked up, but it did nothing to cool Dowd. He mounted the five wooden steps to the church, paused before the heavy wooden doors, and reached gratefully for the brass handle, noting the scourge of tarnish—another thing to bring to Vanderhooven’s attention. If Vanderhooven had spent his time organizing altar guilds and sextons and wardens, as Dowd had told him, the first thing a communicant saw when he came to the mission wouldn’t be tarnish.

Dowd pulled the handle. The heavy door moved slowly, as if giving the frivolous time to compose themselves before stepping into sanctified space. He moved through the doorway, into the blessed shade. Sighing deeply, he felt the cool air slap his face and chill the rings of sweat under his arms, the wide strip down his back, and the narrow strip under the tightness of his waistband. After the glare outside, the narthex was dark. He could barely make out the redwood doors that led to the nave. Ought to be a light in here. Some old lady would trip and break her neck and sue the hell out of the archdiocese. Vanderhooven, the financial
wunderkind,
ought to know that. Too dark.

And too quiet. There was no murmur of an illicit mass being offered—no voices, no creak of pews, no thud as the kneeling benches hit the floor. There was only the acrid smell of incense.

Hesitantly, he pulled open one of the doors and from habit turned immediately to his left, dipped his finger into the holy-water font, and crossed himself, before looking forward to see what Vanderhooven was up to.

There was no mass; there were no parishioners. The pews were empty. Bishop Dowd looked past the low wooden railing up to the altar at the far end of the sanctuary. The gradine was in place behind, the baldacchino cloth hanging above. Nothing out of order. The sepulcher was covered, no sign of the thurible. Where was that incense coming from?

Following the smell of incense, Dowd looked at the side altar to the left. He saw him! Vanderhooven!

Dowd grabbed the corner of the pew in front and braced himself. Then he ran forward.

Five minutes later he stood in the priest’s study, sweat running down his cheeks. “Hanging,” Dowd mumbled into the phone, “goddamned fool hung himself. I knew Vanderhooven was trouble. Should never have accepted him, no matter what Groom and Medlin said. Trouble from the minute he came here. Christ! Why couldn’t they have sent him to Tucson, or Albuquerque?”

“Cut? No.” Dowd swayed back against the wall. “Dead by hanging. Suicide! A priest in one of my parishes! In this, of all parishes!”

“You don’t need to be a doctor,
Doctor,
to see that. His eyes are bulging like a frog’s. His tongue, it’s black.”

“I
DON’T TAKE SMALL CASES
. I have a decadent life-style to maintain.” Kiernan O’Shaughnessy laughed. Living in a duplex on the beach in La Jolla, with an ex-jock as her cook, houseman, and dog-walker, that was pretty darned decadent for a novice in the world of wallowing. At one time she would have been appalled at such self-indulgence, but now, well, she had to admit the transition had been surprisingly easy.

She shifted the phone and ran a hand through her short black curly hair. English racing cap, her hairdresser had called the cut, suitable for a tough little lady. Kiernan had decided to assume that the “tough” referred to her work as a private investigator rather than to the effect of her thick eyebrows and the nose that was just a bit too long for her face. “Little?” It bugged her. But at barely five one there was no way of getting around that. She propped her feet on the deck railing,
her
deck railing, and found herself grinning as she watched the Pacific waves break on the rocky beach.

On the stones below, Ezra, her gangly Labrador/Irish wolfhound, jerked back as the spray hit his snout. He slipped, scrambled for footing, and snarled at the ocean. To her right, where the rocks gave way to beach, a huge former offensive lineman unzipped his wetsuit and waved.

The voice on the phone said, “Kiernan, this case is not small. We’re talking the Roman Catholic Church here.”

“I don’t take cases that don’t interest me.”

“Don’t worry. This one will interest you. If word of it got out it would intrigue half of Arizona. The archbishop is dying. His heir apparent, Bishop Dowd, is an ambitious man. He doesn’t want a scandal in the archdiocese. He’ll make it his business to come up with the scratch even for
your
fee.”

Kiernan pressed a fingertip on her stomach and watched the white spot redden. Time to get out of the sun. That was the problem with the decadent life: you had to be so disciplined about it. With a shrug she leaned back in the chair. Discipline could wait. “Okay, Sam, why does the Roman Catholic Church of Phoenix, Arizona, need a medical detective?”

“They should call an undertaker.”

“Whoops. Not a cause of death they’d like made public, eh?”

“Exactly. And that’s not the half of it.”

Ignoring the fact that she was on the phone, she motioned for him to continue. She had known Sam Chase for years. It was he who had referred her to a local detective, for whom she had worked long enough to fulfill the state licensing requirement. Since then she’d been her own boss, and Chase had referred cases. During those years she had employed that
ciao
wave often, in person and on the phone, and knew he would fill in the silence.

“The priest, Kiernan, was strung up from the altar.”

“And they want me to find out why? For that they need a forensic psychiatrist, not a detective.”

“Their concern is whether they can bury the priest in hallowed ground.”

Kiernan leaned back precariously in the wrought-iron deck chair. It was a game with her to see how far she could go without falling. “Sam, is there any chance the hanging could have been an accident?”

“That’s a thought I had. I’m not sure they have, though. Kiernan, this one is
very
confidential. The priest’s hands were bound. You get the picture?”

Kiernan nodded. “I can see their predicament. Not exactly a holy way to go. Not the type of thing that makes the parish mothers glad they forced their sons to be altar boys.”

“That, Kiernan, is why they’re willing to pay you twenty-five thousand dollars—for you to find out what happened. Do it fast and on the QT. They’re desperate to avoid publicity. What they need is an open-and-shut case by the funeral Monday.”

Behind her the front door burst open. On one leg of the chair, she spun around. The big brown-and-tan mongrel splatted eagerly across the deck and thrust his wet muzzle into her bare stomach. She jerked back and gave his head a halfhearted shove, knowing Ezra would only press his wiry muzzle more firmly against her stomach and grunt until she scratched behind his ears. She cupped her free hand over one ear and rubbed.

The Eternal Philistine by Odon Von Horvath
Kelly McClymer-Must Love Black by Kelly McClymer
Deep Surrendering: Episode Eight by Chelsea M. Cameron
Memoirs of a Geisha by Arthur Golden
Man of Passion by Lindsay Mckenna
Midsummer's Eve by Philippa Carr
i 530d83f9160d5231 by Unknown
The Lightkeeper's Daughter by Iain Lawrence
Delta: Revenge by Cristin Harber
The Death of a Much Travelled Woman by Barbara Wilson