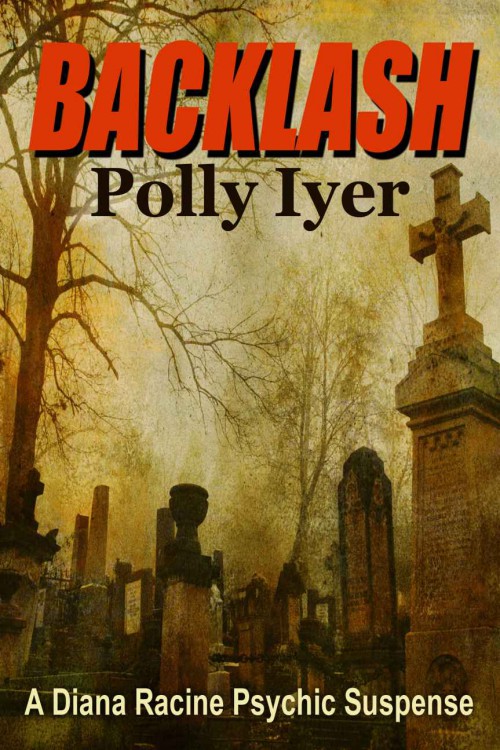 When psychic Diana Racine’s old friend is murdered in New Orleans, her love, Lieutenant Ernie Lucier, brings her in to consult on the case. What she sees when she touches the dead man’s body is another man with silver eyes, a gang tattoo, and a bullet in the middle of his forehead. Before long, Diana and Lucier are drawn into a web of murders that stretches far into the past. The deeper they get into the investigation, the more it appears the deaths are the work of a group of vigilantes on a moral crusade—vigilantes wearing the blue of the NOPD who won’t let anything or anyone stand in their way.

This book is a work of fiction. Any resemblance to persons either living or dead is purely coincidental and beyond the intent of the author. All names of characters and events are the product of the author’s imagination, including some references to New Orleans and surrounding areas. Though Pirates Alley is a real place, Kitty’s Kabaret is fictional as is Restview Cemetery and St. Catherine’s Living Center.

I’ve also taken liberties with the New Orleans Police Department. Any detective working homicide would be part of the CID, Criminal Investigations Department, and work out of the main headquarters building on South Broad Street. However, I wanted Lieutenant Lucier in the French Quarter, District 8. So I put him there because it suited my purpose, and after all, this is fiction. I hope no one is offended by these liberties I’ve taken under artistic license.

Goddess of the Moon

Chapter One
Some People Need Killing

D
enny
Chenault stood in front of the bathroom mirror admiring his taut body. He flexed his right pectoral muscle, then his left, and flashed a broad grin.

“Good-looking son of a gun.”

Naked, he stepped into Keys Moran’s bedroom and let his gaze feast on his lover’s sleek, coffee-colored physique. Caught unawares, Moran jerked back and plopped hard against the pillows, rippling muscles tense in the dim light. He lifted his wineglass from the bedside table with a shaky hand.

“What’s the matter?” Chenault asked. “You should be relaxed. Instead, you look ready to spring off the bed.”

“Nothing. Nothing’s the matter.”

The unconvincing tone conflicted with Moran’s normally casual manner. Moving closer, Chenault noticed his phone buried in the folds of the rumpled sheet, on Moran’s side of the bed.
Why would ―
a bolt of panic shot through him, and Chenault snatched the phone away. “Message sent” flashed across the screen. He opened the email, saw the photo and who sent it.
Alba, the dumbass.
Chenault’s high from his romp of blissful sex turned to dread.

Wiping all warmth from his voice, he said, “Who did you forward the email to?”

Moran huffed out a long breath to match his shrug. “Me is all.”

“Sure you didn’t send it to anyone else?”

Sweat glistened on Moran’s chest and forehead. “I said no.”

“You should never answer anyone’s phone.”

“I thought it might be important. You’re always saying how you don’t want to be caught slacking off. Should’ve erased the damn thing, but I didn’t have time. Didn’t mean to see anything private.”

“What the hell is that, Denny?”

“A dead body. Why’s someone sending you a picture of a dead man?”

“Forget you saw it.”

“How can I forget a man tied to a chair with a bullet hole in his forehead?”

“Because I said to. Isn’t that enough?”

Moran took his time answering. “I could say yes, but you’d know the truth.”

“Don’t push this, friend. He was scum. A slithering piece of drug-pushing shit who raped an eleven-year old girl and got off because the judge said
she
was the predator. Can you imagine? An eleven-year-old girl a predator? After this guy put her in the hospital? The judge deserved the same.” He wasn’t about to confess the judge received his own special punishment.

Moran paled at Chenault’s answer and sat as still as the corpse in the photo, except for the trembling hand jostling the wine inside the glass. “Who killed him? Did you?”

“Don’t ask any more questions. Justice was served.” Chenault picked up his wineglass and downed a healthy slug. “And don’t get all moral on me. I know all about your computer work.”

Of all the shitty timing
. Chenault mulled over his options. Moran’s attitude left him no choice. Too much was at stake. He set his wine down and lifted the shirt draped over the back of a chair to remove his Glock from its holster. He turned around. “Why’d you have to answer it, dammit?”

“I told you. I thought it might be an emergency, and I didn’t know how long you’d be in the can. The picture came up.” Moran stared at the gun. “You gonna shoot me too?”

“I didn’t kill the man in the photo.”

“Yes, I do. You’ve got me cornered, Keys. Others are involved. I can’t let you get in the way of justice. I’m truly sorry.” He scooped up a pillow to smother the shot, but Moran hurled his wine at Chenault’s face and pumped both feet into his stomach. Staggering backward, Chenault lost his hold on the gun and the pillow.

Moran sprang off the bed and charged him, but Chenault recovered the weapon and catapulted to his feet. He jammed the gun into Moran’s belly and pulled the trigger. Moran slumped to the floor with an expression on his face that cut into Chenault’s heart. They’d been lovers. In his own way, he cared about Moran. But when Moran saw the photo, he’d signed his own death warrant. Leaving nothing to chance Chenault grabbed the pillow and put another round into his friend’s chest.

“Shit, shit.” Heart thumping like stampeding wild horses, Chenault dashed to the window to check the street. Empty and quiet. With dawn a couple of hours away, darkness covered the area. Had the shots awakened a neighbor? He hoped not, because he had things to do before he left the house.

He stared down at the motionless man. He didn’t kill good people, but sometimes good people needed killing for the greater cause. Chenault lamented that Moran had to be one of them.

“Why’d you have to answer the goddamn phone, Keys?”

He plucked a pair of latex gloves from the stash he always carried and went to work. He found the vacuum in the utility closet and sucked up everything from the bath and bedroom floors and even the bed. When he finished, he emptied the dust basket into a plastic grocery sack, knotted it, and stuffed it into his satchel. He wiped down the shower, sink, toilet, and bathroom floor with his damp towel, then flushed the toilet twice. A hair follicle, drop of urine, or partial fingerprint was all it took to get him the death penalty. He knew the ropes better than most.

He dressed quickly, holstering his gun, and deleted the photo from his own phone bank before he forgot.

Moran knew everything about phones and computers, so not surprisingly, both of his were password protected. Chenault knew what he’d do with the phone, but Moran’s computer was a fancy desktop model. He rummaged through the office for a laptop or tablet, but he didn’t see one. He knew enough about computers to extract the hard drive. He started to take it with him, then thought again. The last thing he needed was to get caught with the damn thing.

He checked the time. H
urry up, Denny
.

The tool drawer produced a hammer. He wrapped the hard drive in a fresh towel and smashed it to pieces, dumping the remnants on Moran’s desk. After wiping down everything he’d touched, he threw the towel into another plastic bag and into his satchel, then he left Moran’s house.

He’d done some sleazy things in his life, but murdering a friend ― no, more than a friend, a lover ― topped the list. Without wishing for a major disaster, he hoped work would take his mind off what he’d done.

Chenault zipped into the same drive-thru he went to every morning, ordered coffee and a muffin, and pulled into a parking space. He wanted to kill Alba. The guy was a dim bulb. Chenault should never have vouched for him. Too late now. He unlocked the glove box for the burner phone and dialed Alba’s number. “Are you out of your freaking mind, sending me that picture on my personal phone? What the hell’s the matter with you?”

“I called, but you didn’t answer, because you keep that phone in your car. I wanted you to see the latest victim of our justice system before we got rid of the body. Why, what happened?”

“Someone else answered the phone, that’s what happened.”

“How the hell was I supposed to know?”

“You don’t know, which is why you never do something so stupid. Now hear this: never, ever, put incriminating material where it can be accessed. We make these people disappear, not become stars on YouTube.”

“Never mind. I took care of the situation.” People thought of Chenault as a womanizer, not a man who batted both sides of the plate. Only one member of the group knew.

Chenault broke the connection. He missed landlines. You slammed down a wired phone and it made a statement. Bang. You’ve been cut off. These phones were too damn quiet.

Calm down. Stick to your routine
. He’d wiped Moran’s place down good, scrubbed everything. Still, some miniscule connection and they’d be on him before he could say lethal injection.

Wait a minute. So what if the world found out he and Moran were lovers as long as he had an alibi for tonight. That shouldn’t be a problem.

Being outed as bisexual sure as hell beat everyone finding out he murdered his lover.

Manual de desobediencia a la Ley Sinde by Hacktivistas.net
In the Orient by Art Collins
Morsamor by Juan Valera
Meadowcity by Delton, Liz
The Legacy by D. W. Buffa
Sweet Laurel Falls by Raeanne Thayne
Silent on the Moor by Deanna Raybourn
Inside by Brenda Novak
How To Succeed in Evil by Patrick E. McLean
Match by Helen Guri