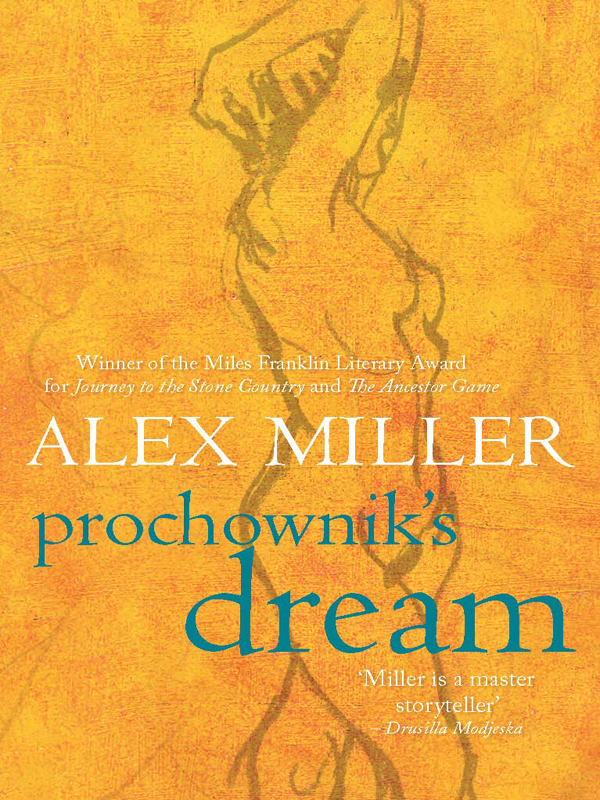 âAssured and intense . . . truly gripping . . . This is a throughly engrossing piece of writing about the process of making art, a revelatory transformation in fact.'

âWith this searing, honest and exhilarating study of the inner life of an artist, Alex Miller has created another masterpiece.'

â
Prochownik's Dream
is an absorbing and satisfying novel, distinguished by Miller's enviable ability to evoke the appearance and texture of paintings in the often unyielding medium of words.'

âMiller is a master storyteller.' â
The Monthly

â
Prochownik's Dream
. . . exemplifies everything we've come to expect and enjoy from one of Australia's most accomplished authors . . . wonderfully absorbing and insightful.' â
Sunday Telegraph

âA beautiful novel of ideas which never eclipse the characters.'

âMiller has once again proved his own artistic prowess with a literary novel that can be plumbed for its depths and resonances or simply enjoyed for the vitality and interest of its well-constructed plot.' â
The Advertiser

PRAISE FOR
Journey to the Stone Country

âThe most impressive and satisfying novel of recent years. It gave me all the kinds of pleasure a reader can hope for.'

âA terrific tale of love and redemption that captivates from the first line.' âNicholas Shakespeare, author of
The Dancer Upstairs

âMiller's fiction has a mystifying power that is always far more than the sum of its parts . . . his footstepsâsoftly, deftly, steadilyâtake you places you may not have been, and their sound resonates for a long time.' âAndrea Stretton,
Sydney Morning Herald

PRAISE FOR
Conditions of Faith

âThis is an amazing book. The reader can't help but offer up a prayerful thank you: Thank you, God, that human beings still have the audacity to write like this.'â
Washington Post

âA truly significant addition to our literature.' â
The Australian

âMy private acid test of a literary work is whether, having read it, it lingers in my mind afterward.
Conditions of Faith
fulfils that criterion; I am still thinking about Emily.'

PRAISE FOR
The Ancestor Game

âA major new novel of grand design and rich texture, a vast canvas of time and space, its gaze outward yet its vision intimate and intellectually abundant.' â
The Age

PRAISE FOR
The Sitters

âLike Patrick White, Miller uses the painter to portray the ambivalence of art and the artist. In
The Sitters
is the brooding genius of light. Its presence is made manifest in Miller's supple, painterly prose which layers words into textured moments.'

PRAISE FOR
The Tivington Nott

â
The Tivington Nott
abounds in symbols to stir the subconscious. It is a rich study of place, both elegant and urgent.' â
The Age

This is a work of fiction. Names, characters, places and incidents either are the product of the author's imagination or are used fictitiously, and any resemblance to actual persons, living or dead, business, companies, events or locales is entirely coincidental.

This project has been assisted by the Commonwealth Government through the Australia Council, its arts funding and advisory board.

For Stephanie
&
To the memory of Max Blatt

We cannot arbitrarily invent projects for ourselves: they have to be written in our past as requirements.

1 The Mistress of Trees

The Mistress of Trees

I should like to understand myself properly before it is too late
. The phrase arrested his attention and he stopped reading and looked up from the book. He was standing in the doorway of his studio, posing for his daughter, who was sitting at her little table within the shadows of the studio's interior. She was drawing a picture of him with her coloured pencils, her black and white Snoopy Dog propped in front of her. When he looked up from the book the little girl also lifted her head and studied him, raising her hand and shading her eyes from the light, her expression serious and concerned. âAre you all right, Daddy?' she asked.

âYes, darling, I'm fine,' he reassured her. He was touched by the earnestness of her inquiry.

But perhaps she was not reassured after all, for she continued to examine him for a long moment before returning to her work, her head bent close to the paper, her free arm around her drawing, shielding it within the circle of her embrace. âYou can move now, if you like,' she said.

He looked at the book in his hand, wondering if he might go on reading it. He had picked it up at random from the table by the door, to occupy himself while he posed for her, and had not registered either its title or the name of its author. It was one of many that had belonged to his father. On the cover there was a reproduction of a familiar painting by Salvador Dali,
The Triangular Hour
. The unearthly glow of the yellows and greens of Dali's imaginary landscape. He read:
A novel of the alienation of personality and the mystery of being
. Inside the front cover at the top of the page, above the brief biography of the author, his father had pencilled his name,
Moniek
Prochownik
. He could see his father now, seated on the couch in the evening, exhausted after his shift on the moulding line at the Dunlop factory, staring vacantly before him, the book face down in his lap, lost in the thoughts inspired by the words in the book, at that time of the evening needing only one good phrase in order to surrender himself to the uncertain universe of the book. His father's apologetic smile on such occasions at finding himself caught gazing absently into space.

He stepped out of the sunlight into the studio and stood looking down with distaste at the pile of old clothes and timber racks that filled his workspace. There were overcoats shagged with use, frayed skirts and blouses, dresses stained and un-hemmed, the dark trousers and jackets of men's suits; and, here and there among the grown-up things, the small garment of a child. The summer heat was drawing from the old clothes the dispiriting smell of napthalene. It was a smell that reminded him of the closets of old people and of their preoccupation with the preservation of their things against the inevitability of decay, as if by preserving their most intimate belongings they might thereby contrive the preservation of themselves. His wife had urged him weeks ago, a touch of impatience in her voice,
Why don't you begin a new project? Take all this stuff back to
the op shops and forget about it, or it will depress you.
Although he knew that it was good advice, he had been unable to summon the resolve to act on it. He was still troubled by a resistant element of these dismantled installations, something unremembered that tugged at him and awaited resolution. He had been unable either to continue with them, or to conceive a convincing new project to take their place. The smelly pile of old clothes had begun to sicken him. He realised it was beginning to stand in his mind for his failure as an artist. Teresa was right, he must get rid of it.

The Watchman by Ryan, Chris
Brandy Purdy by The Queen's Rivals
Ice Hunt by Rollins, James
Lady Scandal by Larissa Lyons
Homeless by Ms. Michel Moore
Adrienne Basso by The Ultimate Lover
Crewel by Albin, Gennifer
Between Us by Cari Simmons
Blindfold by Diane Hoh
Crazy on You by Rachel Gibson