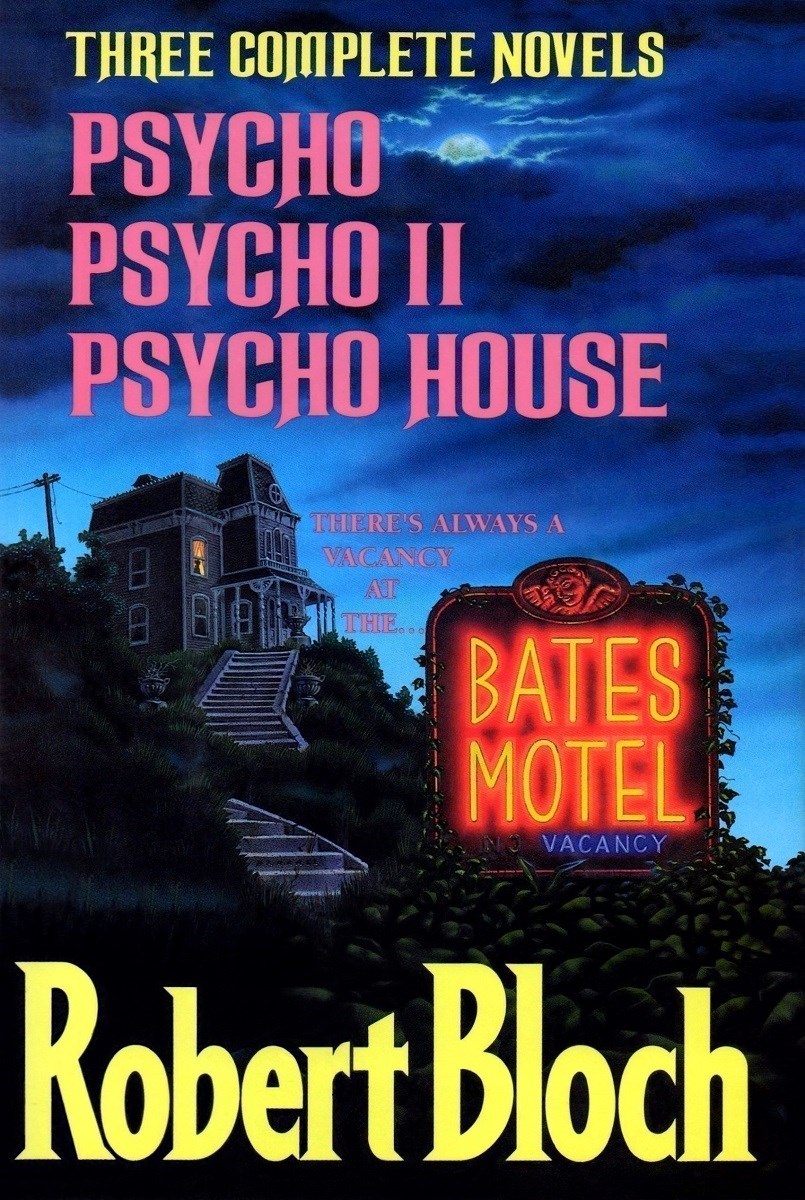 Robert Bloch has been hailed as “the finest psychological horror writer working today” by fellow bestselling author and master of the macabre, Stephen King. And the
Washington Post
declared Robert Bloch a writer who has “etched [his] name permanently in the horror hall of fame.”

Bestselling author Robert Bloch is famed as the creator of that great American horror classic,
Psycho,
the inspiration for the spine-tingling motion picture. He continued the story of Norman Bates and the Bates Motel—where Death is the desk clerk—in
Psycho II
and then
Psycho House.
Now, for the first time, all three suspense thrillers appear in one hardcover volume.

When the Bates Motel loomed up out of the storm, Mary Crane thought it was her salvation. The rooms were musty but clean, and the manager, Norman Bates, seemed like a nice enough fellow, if a little
strange
. . . Then Mary met Norman’s mother . . . And the butcher knife . . . The nightmare had just begun.

Dr. Adam Claiborne thought Norman Bates was on the road to recovery—until Norman killed a young nun and escaped from the asylum dressed in her habit. Now the psychiatrist and former patient are engaged in a desperate—and deadly—game of cat and mouse. Claiborne knows that Norman will head for Hollywood, where a movie based on the Bates Motel murders is underway. But no actor can portray Norman Bates and Norman himself will see to that . . .

The fully-restored Bates Motel, a recreation of the infamous murder site—complete with robot copies of Norman Bates and his lovely mother—is about to become Texas’s newest tourist attraction. Right before opening day, there’s an unplanned addition to the exhibits . . . a bloody corpse is found in the front hall. Was the death a publicity stunt? Was it an accident or deliberate murder? Or has the madness that claimed Norman Bates returned to his home for another killing spree?

“Is one of the all-time masters.”
—Peter Straub

This edition contains the complete and unabridged texts of the original editions. They have been completely reset for this volume.

This omnibus was originally published in separate volumes under the titles:

10%
of this book
is dedicated to
Harry Altshuler,
who did 90% of the work

N
orman Bates heard the noise and a shock went through him.

It sounded as though somebody was tapping on the windowpane.

He looked up, hastily, half prepared to rise, and the book slid from his hands to his ample lap. Then he realized that the sound was merely rain. Late afternoon rain, striking the parlor window.

Norman hadn’t noticed the coming of the rain, nor the twilight. But it was quite dim here in the parlor now, and he reached over to switch on the lamp before resuming his reading.

It was one of those old-fashioned table lamps, the kind with the ornate glass shade and the crystal fringe. Mother had had it ever since he could remember, and she refused to get rid of it. Norman didn’t really object; he had lived in this house for all of the forty years of his life, and there was something quite pleasant and reassuring about being surrounded by familiar things. Here everything was orderly and ordained; it was only there, outside, that the changes took place. And most of those changes held a potential threat. Suppose he had spent the afternoon walking, for example? He might have been off on some lonely side road or even in the swamps when the rain came, and then what? He’d be soaked to the skin, forced to stumble along home in the dark. You could catch your death of cold that way, and besides, who wanted to be out in the dark? It was much nicer here in the parlor, under the lamp, with a good book for company.

The light shone down on his plump face, reflected from his rimless glasses, bathed the pinkness of his scalp beneath the thinning sandy hair as he bent his head to resume reading.

It was really a fascinating book—no wonder he hadn’t noticed how fast the time had passed. It was
The Realm of the Incas,
by Victor W. Von Hagen, and Norman had never before encountered such a wealth of curious information. For example, this description of the
cachua,
or victory dance, where the warriors formed a great circle, moving and writhing like a snake. He read:

The drumbeat for this was usually performed on what had been the body of an enemy: the skin had been flayed and the belly stretched to form a drum, and the whole body acted as a sound box while throbbings came out of the open mouth—grotesque, but effective.

Norman smiled, then allowed himself the luxury of a comfortable shiver.
Grotesque but effective
—it certainly
must
have been! Imagine flaying a man—alive, probably—and then stretching his belly to use it as a drum! How did they actually go about doing that, curing and preserving the flesh of the corpse to prevent decay? For that matter, what kind of a mentality did it take to conceive of such an idea in the first place?

It wasn’t the most appetizing notion in the world, but when Norman half closed his eyes, he could almost see the scene: this throng of painted, naked warriors wriggling and swaying in unison under a sun-drenched, savage sky, and the old crone crouching before them, throbbing out a relentless rhythm on the swollen, distended belly of a cadaver. The contorted mouth of the corpse would be forced open, probably fixed in a gaping grimace by clamps of bone, and from it the sound emerged. Beating from the belly, rising through the sunken inner orifices, forced up through the withered windpipe to emerge amplified and in full force from the dead throat.

For a moment, Norman could almost hear it, and then he remembered that rain has its rhythm too, and footsteps—

Actually, he was aware of the footsteps without even hearing them; long familiarity aided his senses whenever Mother came into the room. He didn’t even have to look up to know she was there.

In fact, he
didn’t
look up; he pretended to continue his reading, instead. Mother had been sleeping in her room, and he knew how crabby she could get when just awakened. So it was best to keep quiet and hope that she wasn’t in one of her bad moods.

“Norman, do you know what time it is?”

He sighed and closed the book. He could tell now that she was going to be difficult; the very question was a challenge. Mother had to pass the grandfather clock in the hall in order to come in here and she could easily see what time it was.

Still, no sense making an issue of it. Norman glanced down at his wrist watch, then smiled. “A little after five,” he said. “I actually didn’t realize it was so late. I’ve been reading—”

“Don’t you think I have eyes? I can see what you’ve been doing.” She was over at the window now, staring out at the rain. “And I can see what you haven’t been doing, too. Why didn’t you turn the sign on when it got dark? And why aren’t you up at the office where you belong?”

“Well, it started to rain so hard, and I didn’t expect there’d be any traffic in this kind of weather.”

“Nonsense! That’s just the time you’re likely to get some business. Lots of folks don’t care to drive when it’s raining.”

“But it isn’t likely anybody would be coming this way. Everyone takes the new highway.” Norman heard the bitterness creeping into his voice, felt it welling up into his throat until he could taste it, and tried to hold it back. But too late now; he had to vomit it out. “I told you how it would be at the time, when we got that advance tip that they were moving the highway. You could have sold the motel then, before there was a public announcement about the new road coming through. We could have bought all kinds of land over there for a song, closer to Fairvale, too. We’d have had a new motel, a new house, made some money. But you wouldn’t listen. You never listen to me, do you? It’s always what
you
want and what
you
think. You make me sick!”

“Do I, boy?” Mother’s voice was deceptively gentle, but that didn’t fool Norman. Not when she called him “boy.” Forty years old, and she called him “boy”: that’s how she treated him, too, which made it worse. If only he didn’t have to listen! But he did, he knew he had to, he always had to listen.

“Do I, boy?” she repeated, even more softly. “I make you sick, eh? Well, I think not. No, boy
I
don’t make you sick. You make
yourself
sick.

Damage (Havoc #2) by Stella Rhys
[Desert Roses 03] - Beneath A Harvest Sky by Tracie Peterson
Carolina Girl by Virginia Kantra
Boxcar Children 56 - Firehouse Mystery by Warner, Gertrude Chandler, Charles Tang
To Dare the Duke of Dangerfield by Bronwen Evans
Shadow Play by Rajorshi Chakraborti
The Janson Command by Garrison, Paul
Living Life the Essex Way by Sam Faiers
Lord of Misrule by Jaimy Gordon
The Promise He Made Her by Tara Taylor Quinn