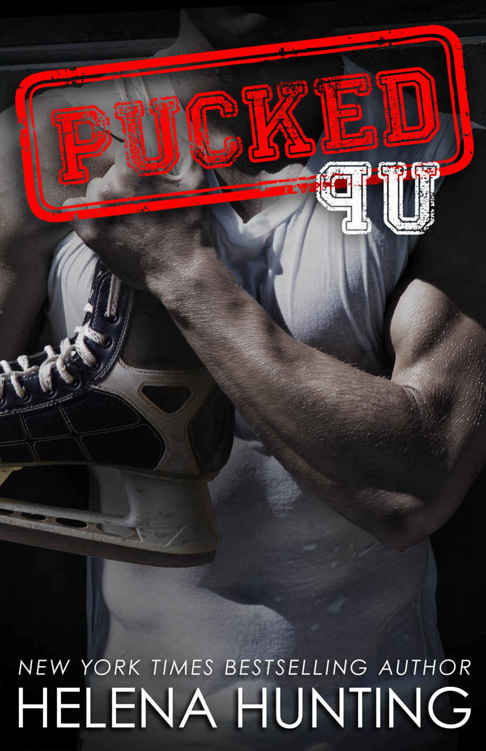 Proofing by Marla at
Proofing with Style

Pucked Up
is a work of fiction. Names, characters, places, and incidents are all products of the author's twisted imagination and are used fictitiously. Any resemblance to actual events, locals, or persons, living or dead, is entirely coincidental.

Except as permitted under the US Copyright Act of 1976, no part of this publication may be reproduced, distributed or transmitted in any form by any means, or stored in a database or retrieval system, without the prior written permission of the author.

To my family, thank you for having my back, for being my cheerleaders and for letting me foster this dream. I love you.

Husband of mine, you really are the best. I couldn’t do any of this without you. Thank you for giving me a chance to do this thing. I love you.

Debra, you’re the pepper to my salt. Even the hardest parts are easier with you around.

Kimberly, you are made of awesome. I’m so glad you had lunch with Nina and the stars aligned. This has been an incredible journey so far, thank you for being a source of encouragement, for the feedback, for the brainstorming and for making this roller coaster so much fun to ride.

Nina, I don’t know how you do it, but I’m grateful that you do. Thank you for years of friendship and putting up with my neurotic squirreliness.

Shalu, you have so much talent. I can’t wait to see you shine. Thank you for making the outsides reflect the insides.

Jessica, I always know I’m in good hands with you. Thank you for all your patience, even when I kept on changing things at the end. Marla, thank you for cleaning up the crumbs and the typos. Mayhem, so many texts in this one! You make amazing innards! Daisy, Kelly, Julia, Liv, thanks for not only being eyes on this, but for being my friends, for talking me down, and for loving my words when all I want is to press backspace. Liv special thanks to you for the conversation which essentially led to the naming of this series. You’re pucking awesome!

To My Filet Chignon’s, The Pams, The Nap Ladies, the 101 ladies, the Indies, the One-Clicks, The PUCKED Locker Room girls, and The HH Street team, you make me feel so supported. Thank you. You give me motivation to keep on going when I hit rough patches

To my BBBabes, thanks for tolerating my overshares. They’re frequent and many. I love you.

Maven, every time you’re not at an event I have a little panic, and then I remember all the nice things you say to build me up, and I manage to get through it. Thank you for the hand holding. Kandace, you’re an incredibly special person. Thank you for being part of my journey.

Jessica R Hodnett, thank you for sharing your horrifically painful wolf spider story with me—and the pictures. They were helpful in ways I’m sure you’ll understand soon enough.

To my WC crew who have watched all of this unfold, thank you for supporting both sides of my life and being my friends and cheerleaders along the way.

As always, to the originals, my fandom friends who have been with me from the beginning, I’m here because of you.

OTHER TITLES BY HELENA HUNTING

Cracks in the Armor

OTHER TITLES BY HELENA HUNTING

EXCERPT FROM THE LIBRARIAN PRINCIPLE

EXCERPT FROM FIRE IN THE HOLE

WASTED IS AS WASTED DOES

I’m super wasted. Like, messed up to the point that Lance, my teammate, has two sets of eyes.

“
I’mma go home.” In my head those are the words I’m speaking, but in reality I think it comes out more like a groan. I take an unstable step toward the line of waiting cabs outside the bar.

Lance puts a hand on my shoulder, his grin sloppy. He’s almost as drunk as me. “Your car’s at my place, Butterson. Come back with us.”

“
I can get it in the morning.” My words run together, but he seems to understand.

“
Just get in the limo, man.” Lance looks to Randy, another teammate and one of my closest childhood friends, for backup.

“
The trainer’ll be at Lance’s at ten-thirty, remember?” Randy says. “You can roll out of bed and right into the pool.”

“
Then I don’t have to call you fifty times to get your ass up,” Lance adds.

One of Lance’s puck bunnies uses the nickname I’ve answered to since I was a kid. My real name is Miller. I wasn’t named after beer. Plus Buck Butterson has a nicer ring than Miller Butterson—too many “ers” in it.

The three girls Lance has convinced to come back to his place are fixing each other’s hair and messing with each other’s makeup while I debate making bad choices.

I mumble something even I can’t understand and lean on the limo so I don’t have to hold my own weight. The shooters were a bad idea. There were too many. I might have paid for them.

I wait while the girls get in the limo. As drunk as I am, I still have a few manners left. The last one bends over, and her micro-mini rides up, giving me a full shot of naked beaver before she sits down. I’m definitely not getting in beside her.

“
You first. They’re your bunnies.”

Going back to Lance’s is not a good plan, but I’ve already said I would, and he has a point about my car being at his place.

He shrugs and holds on to the door frame, sticking his head inside. “Whose lap am I sitting on?” He throws himself into the limo.

The girls squeal, and laughter follows.

I put a hand on Randy’s chest to stop him before he gets in, too. “Don’t let me do anything stupid, ’kay, man?”

Randy’s one of the few people who uses my real name, aside from my dad when he’s pissed. Growing up in Chicago, he lived down the street from me. We’ve played hockey together since we both learned how to skate. When we were drafted to the NHL in our first semester of college, we ended up on different teams. Five years later, we’re back on the same team again, Randy having been traded to Chicago after the season ended. Being off season, it took him all of two weeks to move back. It’s good to have him here. We’ve stayed tight over the years; if anyone is going to help keep me from fucking shit up, it’s him.

Randy gets into the limo and sits between two of the girls. This leaves the bench seat wide open for me. I slide in and stretch out, taking up the entire thing.

Lance already has his arm around Flash Beaver, and her friend in the middle seems like she’s not sure what to do. When she makes a move to sit with me, Lance hugs her to his side and whispers something in her ear. Her eyes widen, and she bites her lip, but she stays where she is.

Going home in a cab by myself would’ve been the smarter move. Then I wouldn’t be facing unnecessary temptation. Sometimes it’s hard as fuck to make the right choices, like removing myself from a situation in which bunnies will inevitably offer up pussy that I’ll have to turn down.

It’s not that I can’t go without. I’ve just been choosing the alternative for the past five years. And quitting cold turkey has been way more difficult than I ever expected. Lance and Flash Beaver have turned toward the corner of the limo now. I’m pretty sure he’s got his hand up her skirt already, judging by the giggle followed by a moan. I close my eyes and lean against the armrest. I’m tired. And hungry. I need pizza.

I root around in my pocket for my phone. I have messages: a couple of texts and a voice mail from my sister, Violet, and a few more from my girlfriend, Sunny. Well, she’s kinda my girlfriend. I want her to be my girlfriend. Sunny’s the reason Randy—or maybe Lance—is taking one for the team, and I’m sitting over here by myself.

It doesn’t help that her brother, Alex Waters, is one of my teammates. He’s also engaged to my sister, and he’s captain of the team. Waters hates me. It’s complicated. The first night I met Sunny, I considered—for half a second—sleeping with her to get back at him. I’m a player, not an asshole. Besides Sunny wasn’t interested in getting naked with me. She actually wanted to talk. And I liked her. So I got her number instead. That was months ago. She still won’t sleep with me. Yet. I’m hoping to change that soon.

I try to read my text messages, but my vision is blurry, and the words all jumble together—even worse than usual. I can’t use the text-to-speech app in here like I normally would because the music’s too loud and everyone will hear my business. Plus sometimes my sister’s messages are assholey. She has no filter. At all.

“
I’m hungry. Anyone else hungry?” I yell over the music.

Lance is too busy sucking face, but Randy raises his hand. The girls on either side of him shrug. The one stuck in the middle of everything looks like she’d rather be anywhere but here.

I pull up Siri and ask her to call my favorite pizza joint. It takes a few tries to get her to do what I want, partly because I’m slurring my words and partly because the music interferes. Finally someone turns it down so I’m able to put an order in.

That Forgetful Shore by Trudy Morgan-Cole
Arnie Jenks and the House of Strangers by Tim Bradley
Unlock Yourself (The Desires Unlocked Trilogy E-Short Part 0.5) by Blake, Evie
The Guardian of Threshold by A. A. Volts
Chameleon On a Kaleidoscope (The Oxygen Thief Diaries) by Anonymous
Tailed by Brian M. Wiprud
Secret Indiscretions by Trice Hickman
Grim Rites by Bilinda Sheehan
Going Dutch: How England Plundered Holland's Glory by Lisa Jardine
Faith, Honor & Freedom by Callahan, Shannon