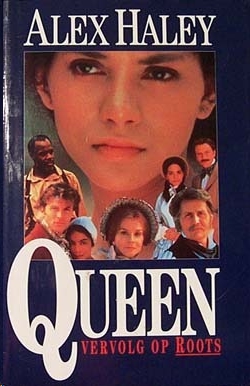 The Story of an American Family

If you purchased this book without a cover, you should be aware that

this book is stolen property. It was reported as "unsold and destroyed"

any payment for this "stripped book."

1350 Avenue of the Americas

Haley, and David Stevens Published by arrangement with the author

All rights reserved, which includes the right to reproduce this book or

portions thereof in any form whatsoever except as provided by the U.S.

Published in hardcover by William Morrow and Company, Inc.; for in-

AVON TRADEMARK REG. U.S. PAT. OFF. AND IN OTHER COUNTRIES, MARCA

Dedicated to the memory of Alex Haley

And to the African, Kanyuro, of the Kikuyu, who saved my life during a

small skirmish in an obscure war on the Kenya/Uganda border, and gave

me the priceless gift of the years since then.

The role played by David Wolper in Alex's career, and, latterly, my own,

is remarkable, but I would also like to record my gratitude to Bernard

Sofronski, who first had the idea of associating me with Alex and this

My thanks also to Mark Wolper and John Erman. To Jeff Sagansky, John

Matoyan, and Larry Strichman. To Paul Bresnick, and everyone at William

To Louis Blau, and to George Haley, Alex's brother, and William Haley,

To my agent, Irv Schwartz, who is the best, a pillar of support and a

valued friend. To Fiona McLauchlan and Daniel Donnelly, for their help

in research. To the staff at Alex's farm, who adopted me and nicknamed

me The Moonshine Kid, and especially Gertie Brummitt, who first let me

To Bubby, with love. And Rooney, Myrtle, Maggie, and Dudley. And Morgan,

On Alex's behalf, it is ittcumbent on me to record his gratitude to Myran

E. Haley, his wife and valued associate, and to George Sims, his lifelong

will wave 0'er tyranny's grave And bloomfor the brave And the fi-ee.

On a cold and rainy April night, in a guarded garret somewhere in Dublin,

"In the awful presence of God, 1, Jamie Jackson, do voluntarily swear and

declare that I will form a brotherhood among Irishmen of every religion,

for equal, full, and adequate representation of all Irishmen. Not hopes,

fears, rewards, or punishment shall ever induce me to inform on, or to

give evidence against, any member of this society. So help me God."

It was the year 1797. Jamie was barely fifteen. There were eleven other

men in the room, for no cell of the illegal association could be larger

than twelve. He had been sponsored into the group by his uncle Henry.

Partly because of the eloquence with which young Jamie voiced his

convictions, partly because they needed every man they could get in the

fight against the occupying British, but mostly out of respect for his

uncle, not one black bean was cast against him.

thousand men had sailed toward Bantry Bay, in southern Ireland, to drive

the British from the country. On the flagship, Indomitable, was Wolfe

Tone, who had persuaded Napoleon that the British could be defeated. The

weather went against them, and high winds and heavy rainfall frustrated

the landing of men from the French fleet. The storm raged for six days,

forcing the ships, one by one, to cut cable and seek safe harbor, until

the Indomitable stood alone. Then she too turned about and limped back

When news of the retreat at Bantry Bay reached Dublin Castle, Lord Clair,

the Lord Chancellor of Ireland, personally appointed by King George 111,

made a jubilant proclamation.

"It was a Protestant victory! It saw God on our side!"

lie intensified the suppression of the United Ireland movement, he

and finally he declared martial law.

The ferocity with which the British troops enforced his orders shocked

even the most moderate of men, and Jamie, appalled by what he saw, made

his decision and formally cast his lot with the Irish cause.

three of his brothers, but his older sister Eleanor was married to Oliver

Bond, a leader in the secret association. His sister Martha had married

Hu-h Hanna, whom Jamie believed to be a "Peep 0' Day Boy," a vigilante

group mostly from the peasant class. Under cover of night, toward dawn,

His sister Sara was engaged to Jimmy Hanna, Hugh's brother, who had been

tutor to Jamie when he was a boy in Ballybay, and had helped to awaken

his social conscience. Jamie's uncle, Henry Jackson, with whom he lodged

while he was at school in Dublin, was leader of the small cell that Jamie

Yet Jamie was an unlikely revolutionary. The eleventh of twelve children,

he was bom to comparative wealth, and grew up in an atmosphere of

privilege and security. His father, James Jackson, owned many acres of

land and a linen mill at Ballybay, near Carrickmacross, in County

Monaghan. The British were well disposed to those native-born Irish who

espoused their religion and respected their authority, and James Jackson

had flourished under their colonial dominion.

A stem, intolerant man, James Jackson loved the English way of life, and

had little sympathy for the Catholic peasants. It appalled him that so

many of his children had chosen to embrace the nationalist cause, and

thus put everything he had worked for and achieved, and their own

inheritance, at risk. He could not understand that it was the bloodless

and companionship in the camaraderie of political passion. He was

dispassionate toward his family and, except in matters of procreation,

detached frorn his wife. Other than the marital bed, his only passion was

his hobby, the breeding of champion racehorses.

When Jamie was eighteen months old, his mother gave birth to another boy,

Washington, and died four months later, at thirty-five, worn out from

childbearing and a loveless marriage. Jugs, the family housekeeper,

became surrogate mother to Jamie and his infant brother, and she came to

love Jamie as the son she had never had, and he basked in her affection.

Jamie's mother, Mary Steele Jackson, whom she had nursed from infancy.

After Mary's death, she ran the house with peasant discipline, faced

trouble by first crossing herself and then wielding a big stick, and

tended toward earthy language after a few nips of her master's brandy.

She knew every Irish superstition in the book, and practiced most of

them, especially those that were said to placate the fairies.

and loveless estate. Several times a week, Jugs went to visit her sister,

Maureen, and her husband, Patrick, a tenant farmer on the neighboring

Hamilton land. Maureen had a son, Sean, of Jamie's age and Jugs took

companion. They became more than playmates. From widely diverse back-

grounds, Jamie and Sean quickly became fast friends, and grew up in each

formal. The cottage had a thatch roof, mud walls, an earthen floor, and

a vibrant sense of life, of passion and laughter and anger. The loom was

the largest piece of furniture, and in the winter the cow lived inside

with the rest of the family.

Jamie loved the simple formalities of peasant life. Whenever he went in

through the door he would say, "Blessings upon all I see," as Jugs had

taught him. He teamed some words of Gaelic. When Maureen churned butter,

she recited to him the

legends of it. If milk splashed during the churning he would be doomed to

marry a drunken spouse. If someone "blinked" your cow, he learned how to

break the curse. When the butter finally broke, he twisted the staff three

times, and placed it over the mouth of the chum, and he helped her smear

He loved the stories that the shanachies, the traveling storytellers,

recited of the leprechauns and the little folk, and he believed in the

fairies, who lived on the mist-shrouded Crieve Mountain nearby. He loved

the great history of the Gaelic people, and of the blessed Saint Patrick

who had converted them to Christianity, and had rid the island of snakes

by tapping with his staff upon the earth. He learned of the glories of

the time of kings and poets, and of the Viking raiders, who were defeated

at Clontarf by Brian Bom. He heard the long history of invasion by the

British, who were determined to subjugate the Emerald Isle, from Henry

11 to the ruthless, hated Oliver Cromwell. Of the Protestant settlers

brought from England and Scotland to be settled in the north, to reduce

the influence of the Catholics. He heard of repression and rebellion,

evictions and retaliations, and the suppression of the Catholic religion

that followed the Irish defeat at the Battle of the Boyne.

He wept when he heard the stories of the potato blight, and the awful

famine that followed, which decimated the population and forced many of

those who did not die to emigrate, mostly to America. He cursed the

British for what they did then, expropriating yet more land, because the

peasants, who could not afford to eat, could not pay their rent. He

gasped at the stories of the White Boys, who refused to pay tax, and rode

through the night cutting off the noses and cars of tax collectors, but

He wept again at the tales of the reprisals against the White Boys, how

they put the tar cap of molten, burning pitch on the peasant's head, and

mocked him while he screamed in agony, unable to remove the fiery mess.

and rape, or the British soldier's sport of setting fire to the hay in

a peasant's cart and ramming the flaming

cart into the man's house, laughing while the cottage burned. Most of all, he

loved Sean, and tried to emulate his hero in every way. A moderate and

studious boy, who grieved for the mother he had never known and sorely

missed his father's affections, Jamie found in the rollicking, boisterous

Sean a friend who filled the emotional void in his heart. Through the days

of their childhood they were inseparable, roaming the lanes between

Ballybay and Carrickmacross, the daring Sean leading the wide-eyed Jamie

into scrapes and adventures and pranks.

Sean taught Jamie to play the wild game of hurley, and how to cut turf

from the peat bogs, stack it in barrows, and take it back to the cottage

to dry, to be used as fuel for the fire. They visited Sean's father at

the Jackson linen mill, and Jamie watched in amazement the arduous labor,