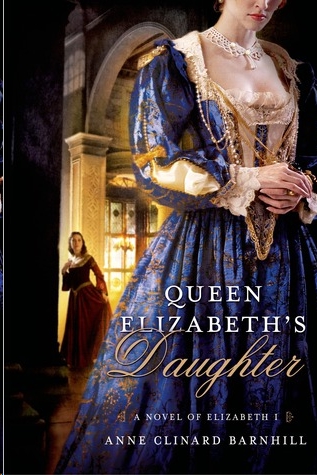 To all those whose lives have been touched by cancer

Writing a book is hard work. Writing
Queen Elizabeth’s Daughter
was especially difficult because I wrote it while undergoing treatment for stage-three uterine cancer, a very nasty, aggressive kind. I had a radical hysterectomy, chemo, then radiation, then more chemo. It was a very tough year. However, creating this story kept me going, kept me believing in my recovery, and in myself. There are many, many people I want to thank for their ongoing support and love during the process.

First, thanks to my editor, Charles Spicer, who was incredibly patient and supportive during this time. His insightful comments and impeccable guidance make him truly an editor par excellence. I’d like to also thank my agent, Irene Goodman, for her understanding. April Osborn has been a wonderful person with whom to work on the nuts-and-bolts of the book, and Anya Lichtenstein has done a great job of sending the book out into the world. I’m much indebted to Ragnhild Hagen for a meticulous and thorough job of copyediting. Thanks also to the artists who designed such a beautiful cover—I love that blue dress.

Next, I’d like to thank some dear friends whose consistent love and care gave me courage to continue when I was ready to quit. Becky Nestor Thacker, the amazingly talented seamstress who created my Tudor dress, was there with me every step of the way through my treatments. I simply wouldn’t have made it without her. Several wonderful friends sent a constant stream of cards and phoned me frequently, boosting my spirits with their love. Thank you, Chris Povish Freeman, Jo Claire Spear, Kathryn Lovatt, Sandra Redding, Carol Lewis, and the EFM group. I’d also like to thank several people who brought me food when I was too weak to crawl out of bed: the women at St. Paul’s Episcopal Church in Cary, North Carolina—Judy Crow, Jeanne de Ward, Deb Richardson, and my sister-in-law, Fran Weir. Those ladies can cook!

I’m lucky to be a member of an online writing group called Book Pregnant. Those folks have been kind and generous beyond measure as they encouraged me to keep writing and keep healing. There are almost thirty members, all debut novelists (well, we started out that way—now many of them have second and third novels!), so I will not list them here. But know, BPers, I love you all!

Thank you to my Facebook friends for their support and prayers. There are others who also supported me with their love; I cannot list them all here but I hope they know they are in my heart. I’m especially grateful to the man with the green eyes who inspired Sir John’s good looks.

My three sons, Michael Smith, Jason Smith, and Adam Barnhill, offered me so much love and support during the writing of the novel and my recovery—thank you for everything. They, along with their wives, Jennifer Shy and Kristi Carswell, also cooked delicious meals for me during that time. Thank you.

To my parents, Jack and Virginia Clinard, thank you for a lifetime of unwavering support.

And to my husband, Frank, a thousand thanks for all that you do and have done for thirty-five years.

I am a very lucky and grateful woman.

God’s death! I shall have their heads! To marry without the permission of one’s prince is treason! I will see everyone who took part in this debacle punished—the priest who dared marry them, the witnesses who arranged the wedding, even the stable boy who held their horses—all shall pay for this insult against my sovereignty.

I have punished others before them, those fools who dared to marry without my consent. Did they believe I would be more lenient with Mistress Mary, just because she is my beloved cousin? If that is what they thought, then they are wrong! They will rot in the Tower until their stinking carcasses have turned to dust!

Parry, did she think her treachery would go unpunished? After our most kind treatment of the baggage! Oh Parry, when I think of how she came to us, not much more than a babe in arms, how her chubby arms clung to my neck for comfort—God’s blood, she shall pay for her prank! All I have given her—hearth and home! Food and drink! Satins and silks to show off her beauty! Rubies and pearls to sparkle in her hair and on her person!

Dear Parry, I gave her my heart—you know it is true! Does she put so little value on my love that she would turn traitor? I have cared more for her than I have for any man! A purer love. For she has been the daughter of my heart, if not my body! But she tossed my love back to me! Without a care!

No! I will
not
forgive her, Parry! She has gone too far! Ungrateful wench! I shall see her and that new husband of hers in the Tower! They shall suffer a traitor’s death. I shall send for the guards this instant.

You are right, dearest Parry. I could not bear such punishment. Even now, when I look into her dark, dark eyes, I see the poppet still, barely three years old, curtsying to me with as much grace as any grown woman, her dark hair hanging down her back, her little kirtle trimmed in lace. When I close my eyes, I can still feel her solid body seeking comfort from my own. Parry, do you recall her first night at court, how she cried until you took pity on her and brought her to me, how she fell asleep in my arms, snoring gently. I can still recollect her sweet smell, like the grasses in spring, fresh and delicate. I had not yet been officially crowned—I was young and beautiful! Ah, before the cares of the world etched themselves across my face …

No, Parry, I cannot send her to her death. I must keep her with me somehow. For now, it is I who cannot sleep, I who toss and turn unless she is there to comfort me. Fear not, old friend, she shall come to no harm.

But by God’s teeth,
he
shall pay! He shall pay with his life for taking my girl from me! I
will
have
his head!

And I hope to have children; otherwise, I would never marry.

After eleven years under the rule of Queen Elizabeth, the England of 1569 found itself prospering, due mainly to the peace brought by the queen’s foreign policies. Through cunning use of her status as an eligible young woman seemingly eager to be wed, the queen had been able to walk a thin line between maidenhood and marriage, leading to the security and, for the most part, happiness of her people. When France threatened, she pretended to entertain the possibility of marriage to the Duke of Anjou. When Spain became menacing, she turned her romantic attentions to her former brother-in-law, King Philip. She pleased the Protestants by flirting with the royalty of the German states. By balancing her numerous suitors, Queen Elizabeth kept the rich jewel that England had become from the entanglements of war. As a result, she was able to refill the coffers of the crown, which had been emptied by her sister’s previous reign when Queen Mary I had supported her foreign husband’s fruitless war efforts. Elizabeth took great care not to fall into a similar trap. She refused to make war and she refused to make a domestic match.

Though she had kept her country safe from foreign entanglements, there were still problems on English soil. The religious struggles between the Catholics, who lived mostly in the rural, northern parts of the land, and the stronghold of Protestants around London continued, though the queen was lenient in her dealings with recusants as long as they kept quiet and obeyed English law. However, this delicate balance was now beginning to teeter because Mary, Queen of Scots, had been deposed by her Scottish lords due to the mysterious death of her husband, Lord Darnley, a death in which Mary herself had been implicated. Then Mary had been carried away by the Earl of Bothwell, who, it was said, kidnapped and raped her. In response to this gross insult to her person and dignity, and much to Elizabeth’s horror, the Scottish queen married the man.

Such events proved too much for the lords of Scotland to endure, and Queen Mary lost her crown. In desperation, she turned to her cousin Elizabeth for shelter. Elizabeth quickly recognized the threat posed by this Catholic queen, who had as much right to the English throne as did Elizabeth, in the minds of many. Elizabeth immediately placed Mary under guard and limited her access to the outside world. However, this did nothing to stop Catholic conspiracies from springing up, intricate plans to place Mary on the throne, thereby returning the country to the rule of Rome. These plots gave Elizabeth and her guardians many sleepless nights. But few were aware of the threat, except the queen herself, Master Cecil, and Robert Dudley.

For Mistress Mary Shelton, now fifteen, the world seemed safe and secure; she attended to her studies, danced and played the virginals, embroidered clothing for the poor, chattered with the queen in the royal bedchamber, and ate as many gooseberry tarts as she could sneak past Mistress Blanche Parry.

Mary had lived at court since her parents’ deaths within a fortnight of each other in November 1558. Elizabeth had become queen that very month, a young, vibrant woman of twenty-five. At that moment, she had met the three-year-old orphan and taken the child into her care. Because Mary’s father had received his knighthood from King Henry VIII, any of his offspring underage at the time of his death would become royal wards. But Mary was the only one of his children under the age of fourteen; the rest had reached their majority. Mary’s future was at the queen’s disposal.

Mary was not only a ward, she was also Elizabeth’s cousin. Mary’s grandfather, Sir John Shelton, had married Anne Boleyn, sister of Sir Thomas Boleyn, Elizabeth’s grandfather. They were tied by bonds of kinship and, because of their long association, bonds of love.

Stepping into the Prince's World by Marion Lennox
Zombie Pink by Noel Merczel
Douse (Book One: At the Edge of a Hurricane) by Hydra, June
Flesh: Part Fifteen (The Flesh Series Book 15) by Corgan, Sky
Strong Cold Dead by Jon Land
False Prey: A Wildfire Novella (Wildfire Saga) by Marcus Richardson
Out of the Shadows (Bellingwood Book 12) by Diane Greenwood Muir
Third to Die by Carys Jones
9781618853462BlindEcstasyHoltNC by Unknown
Once Upon a Time in Hell by Guy Adams