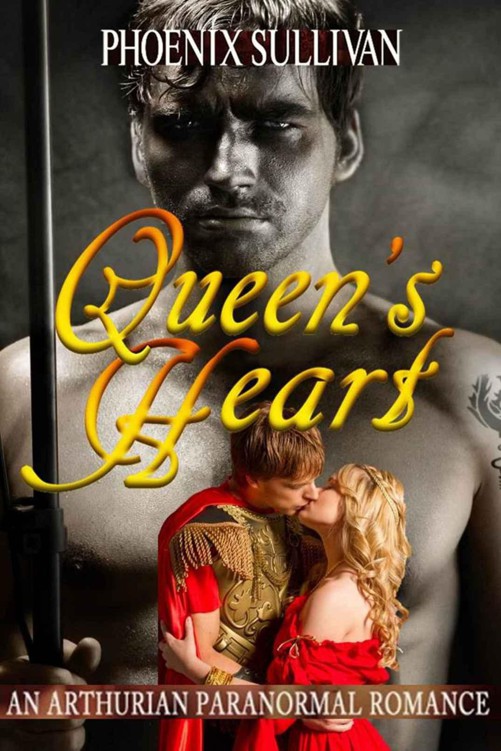 The mysterious harper with the sculpted body of a god who she heals of a poisoned wound is actually a nephew of King Mark of Cornwall. He's the renowned knight, Tristan, and he harbors a dark and deadly secret.

When Yseult's father gives her to the aging King Mark in a marriage of convenience, a love spell meant to ease her heart goes awry, bonding her and Tristan instead.

Meanwhile, one of the fae
—
a shifter who runs with The Wild Hunt
—
has been cursed to live as a man until he can capture the heart of a human queen. Falling helplessly in love with Yseult, he becomes Tristan's greatest friend
—
and greatest rival.

Caught between the despair of the king she's married to, the knight who's sworn to her, and the fae who will have her at any cost, it's Yseult who's destined to lose no matter which man wins.

Know the minute my next book is available! Sign up for my mailing list today. You’ll ONLY receive a newsletter when I have something new on offer, and your email will
never
be sold or spammed.

No part of this book may be reproduced or transmitted in any form or by any means, electronic or mechanical, including photocopying, recording or by any information storage and retrieval system—except in the case of brief quotations embodied in critical articles or reviews—without the written permission of publisher or author, except where permitted by law.

To hell with love.

No heart deserves to be shattered the way mine was. No life deserves to be reft of the one constant that makes sense out of an increasingly senseless world.

Brinn was my all—my present, my past, my destiny.

When she died, I was broken. I thought there could be no greater pain this side of Avalon.

Had our story ended with an iron-tipped arrow and my lifeless Brinn, I would have accepted and conquered that all-consuming grief—in time. But to learn she not only lived who I had given up for dead but that her heart now sang for another was joy and pain bound so tight it left no room for breath.

But the thing that maddened me beyond all reason, that cut my soul in two and shook each piece in turn as would a rabid wolf, was that she had abandoned me—son of Herne, leader of The Wild Hunt—for two mortal princelings whose lives are mere candle flicks to the wildfires that are fae.

Fae and men do not bond.

Fae and men do not mate.

Some laws of nature are incontrovertible.

My heart lashed out at this vile and unnatural thing my Brinn had become. For months I fed on my bitterness, blaming Brinn for her weakness and myself for being the fool, and shielding my heart from further pain.

I did not understand why my beloved father smiled all the while at his broken son when he should have been gnashing his teeth beside me. I grew to hate that patronizing look he bestowed upon me whenever I thought to lay bare my pain before him.

It never occurred to me Father and Nature were conspiring to teach this fool of a fae a soul-deep lesson about natural laws, pain’s true strength, and heartsong’s benefaction.

I knew better than to dream. Regularly my ears were filled with cautionary tales of women who did dare to dream of a different life only to be rewarded with hardship far removed from that which they imagined.

“You are the daughter of a king,” my mother lessoned me. “Accept the future which that means. Where would you be had I not bowed to the inescapable?”

Not bound to the same tedious life as you
, I wanted to retort, but held my tongue instead to avoid her inevitable sad and withering look.

Still, privately, in my head and in my heart, I dared to dream: of adventure, of difference, of love so bold and grand even the stars would be abashed.

Aye, I got all that—and more.

I should have listened to my mother.

My normal mouse of a handmaid plucked frantically at the hem of my overgown and the mourning cloth in my lap I was stitching tumbled to the stone floor. When Brangien didn’t shrink from the sharp look I turned on her, I knew this wasn’t some imagined slight or overlooked task that needed righting.

“A harper, my Lady. Wounded. Unto death, perhaps. He’s dressed in a noble’s finery.”

“Washed up to the shores of Whitehaven in a boat with only a harp and sword by his side, they say.”

Harp and sword. Peace and war. My curiosity was piqued, but it didn’t answer why I was being called to help.

“Surely the chirurgeon would be better suited to care for a death wound.” I reached to retrieve the cloth on the floor.

Brangien stepped in closer than courtesy and gripped my hands in hers. “There’s poison in it, they think. It’s both the chirurgeon’s skill and yours needed, my Lady.”

Poison
. That
was
something I knew about. Mother had taught me its craft along with a potion spell or two. Natural magics such as women knew, not the magics of druids and sorcerers and the fae of the forests.

I put aside the mourning cloth I’d been stitching in honor of The Morholt, my uncle, slain and put to ground not two days ago.

“Take me to this harper lord.”

They’d laid him on a pallet in a corner of the Great Hall. I had to push past my father and a half dozen knights to get to him. Ranulf, the chirurgeon, was already there. On a brazier set beside him, a small pot of pennywort had taken smoke, the sweetly acrid scent tingling in my nose as I drew near.

On sight of the harper, my breath clutched in my chest. Either one of the knights or the chirurgeon had stripped the harper to his waist. The deep gash at the peak of his right shoulder was red and rude against his light tan. The breadth of those shoulders was staggering, certainly surpassing that of any of the men currently in the Hall, though each of them practiced at the quintain almost daily with greatswords and the new fashion of shields half the size of doors that, locked together during battle, presented a near-impenetrable wall to the enemy.

The burl of the harper’s shoulders flowed easily into the hard curves of his chest pleasingly thatched with dark hair that thinned as it reached the ridges of his taut waist.

I could only guess at what lay between the narrow flanks modestly covered by linen breeches, but my imagination eagerly supplied the details.

When I peered into his face, looking beyond the sweat-sheen of pain and fever that gripped him, I saw the strong-jawed profile of a fierce and confident yeoman.

In all, this extraordinarily fit and handsome man had doubtless seen more sword play than harp play. And when I knelt beside him to further examine the heated wound at the base of his neck where a blade had bit deep into the flesh, I saw also the myriad fine scars that traced his skin. The mystery, though, of who and what he was would have to wait.

“What manner of knave would use a poisoned blade on another knight?” I hissed.

“If you can cure him, we’ll doubtless have the answer,” my father said, most reasonably.

“If Ranulf can keep the contagion from the wound, I can draw the poison from it. But if it’s spread too thoroughly already into the rest of his body…” I sincerely hoped to save this errant harper-knight. “The wound is at least two days old. Where did he come from?”

“He washed up in a skiff, strumming and singing like a madman or fool. When my men went to collect him, he collapsed from the fever. Perhaps someone here will recognize his sword. Otherwise, none of his rings identify him and he carried only a small blank buckler. Do what you can for him. Both of you.” Father swept Ranulf the chirurgeon into his glance as well. “If you need your mother, I’ll see she’s available.” He strode off then to whatever duties awaited, taking the knights with him.

Brangien hurried to my side as soon as they left. Not for the first time was I grateful for her attentiveness. In some ways, my pretty handmaid and I were as close as sisters despite our different stations. Her gaze lingered over the bare chest of our visitor before she asked, “What medicants do you need?”

Waking Hearts by Elizabeth Hunter
Wallace Intervenes by Alexander Wilson
KENNICK: A Bad Boy Romance Novel by Jackson, Meg
Historia de Roma by Indro Montanelli
Click - A Novella by Douglas, Valerie
Liars and Tigers by Breanna Hayse
Demon Moon by Meljean Brook
A Time to Die by Lurlene McDaniel
Boone: A Biography by Robert Morgan
Don't Look Back: sequel to He Loves Me Not (Lily's Story, Book 2) by Kersey, Christine