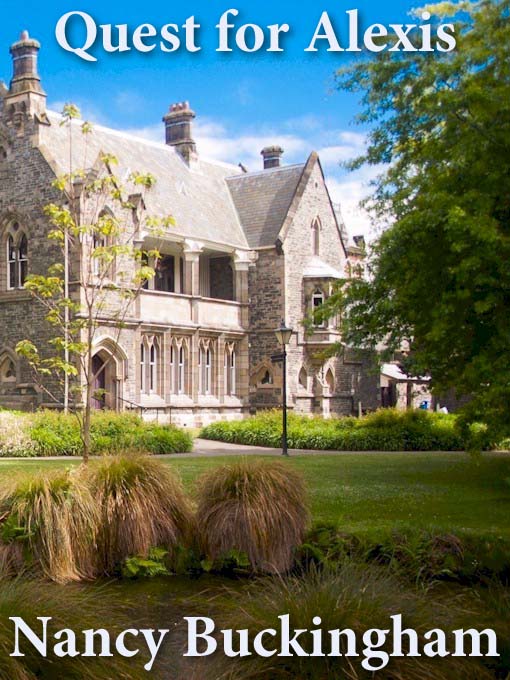 As I turned the corner of Madison Avenue and Forty-
second Street, I faced a bitter wind blowing across
town. A scatter of snowflakes whirled by, stinging my
cheeks. I shivered, hunching deeper into my coat. I’d
planned to use my lunch hour choosing a cocktail
dress for a party the agency was throwing, but the icy
wind changed my mind. Tomorrow would have to do.

I dived into the nearest lunch counter and ordered
coffee and a corned beef sandwich. It seemed that
everyone in Manhattan had the same idea. The place
was crammed. But I squeezed in beside a weather-
beaten little man who was wolfing a hot dog as if it was
his first food in days. Idly, as I sat sipping my scalding
coffee, I scanned his newspaper with him.

The front page screamed the usual political crisis. I
hardly took in where it was this time and let my eye
wander down the page to find something more interest
ing. A small headline caught and riveted my attention:

In the stuffy overheated atmosphere I went cold
with shock, feeling the blood drain from my face, my
fingertips. The pounding of my heart throbbed in my
ears. It had to be Alexis. What other Czech exile would
rate a front-page mention? But I could see only the
alarming headline, the story itself coming below the
fold of the page.

“Please,” I blurted out, “may I have a look at your
paper for a minute?”

The little man stared at me in astonishment. Then,
stuffing the last piece of hot dog into his mouth, he
stood up and held out the newspaper.

My hands trembled, and I had to steady myself be
fore I could focus on the print.

Alexis Karel ... celebrated liberal writer ... dedi
cated anti-Communist ... vanished from his home in
Sussex, England.
The short paragraph added the infor
mation that Miss Belle Forsyth, the nurse who was
employed by Dr. Karel to look after his invalid wife,
was also missing. Police were investigating the mystery.

I dropped the paper and stared blindly into the
steamed-up mirror behind the counter. The story was
unbelievable, fantastic. It didn’t even begin to make
sense in my numbed mind.

All at once I jerked into action. I had to get out of
this place. I had to be doing something. I slid off the
stool, tripping in my haste so that I nearly fell. As I
emerged into the street, I felt the sudden slap of ice-
cold air. Without any clear plan in mind, I broke into
a run and didn’t stop running until I arrived back at
the Madison Avenue offices of Brand, Feiffer, and
Coles. On the eighth floor, I stepped out of the elevator
and walked smack into the solid frame of Hugo Blair,
the copy chief and my immediate boss.

Hugo took the impact calmly, holding me pinned
against him.

He released me and read the paragraph where I
stabbed my finger urgently.

“Alexis Karel. Isn’t he the guy who’s your uncle?
The one who took care of you after your parents
died?”

I nodded miserably. “What can it mean, Hugo—
saying that he’s
vanished?
I’ve got to know what it’s
all about. I’ll have to telephone home to England and
find out exactly what has happened.”

“Sure, you do that, Gail. There might be some fur
ther news by now.”

He walked with me down the corridor into the large
room he and I shared with the other copywriters. Two
of the men were there, working on rush jobs, and hard
ly glanced up. The others were all out to lunch. Hugo
pushed me into a chair and picked up the phone on his
desk.

“Tell me the number, Gail, and I’ll put the call
through.”

“Yes, Sussex,
England,”
he repeated to the switch
board girl. “And hurry it up, Maisie, will you?” Lean
ing forward, he touched my arm. “Who do you want
to talk to, Gail? Your aunt?”

I shook my head in a daze. Poor Madeleine. I just
couldn’t bear to think what she must be going through
at this moment. After her long ordeal in Czechoslovakia, she had no reserves of strength left to cope with a
shock like this.

“No, I’d better not speak to Madeleine,” I said. “Not
until I’ve had a word with Rudi. He’s my uncle’s sec
retary. He’ll know as much as anyone.”

“Try
not to worry, Gail. It may all be cleared up by now.”

I sat there on the edge of my chair nervously, and
when the phone rang I leaped to my feet. Hugo picked
it up, asking, “Who’s that speaking?” Then to me he
said, “It’s the man you want.”

“Rudi It’s me—Gail.” My voice was choked and
tight. “I just read about Alexis in the paper. For God’s
sake, what’s happened?”

“Gail?” His astonishment was obvious. “I
...
I sup
pose I should have let you know at once. But there
was nothing you could do, and I didn’t want to worry
you. It’s a terrible business.”

“It hardly said anything in the paper, Rudi,” I cut
in. “Just that Alexis has vanished and the police are
investigating. What’s it all about?”

“I wish I could tell you, Gail. I wish I knew. But
we have no idea what happened, or where they might
be.” There was a pause, and I sensed Rudi’s reluc
tance. “Did you know
...
did the newspaper mention
that Belle is missing also?”

“Yes, I read that. But what does it mean? I don’t
understand.”

It was easy to call to mind a picture of Belle For
syth. She was the sort of woman who makes a swift
and lasting impression—tall and graceful in her move
ments, with gorgeous copper-colored hair which she
wore sleekly coiled on the crown of her head. I re
membered Alexis saying it was a miracle to have
found someone so eminently suitable. A trained nurse, but, more important, a charming companion for Made
leine, quiet and never fussy, accepting my aunt’s un
predictable moods with patient tolerance. When the
chance had come for me to work for six months at
my firm’s head office in New York, I had been able
to accept with an easy conscience, knowing that Madeleine would have the best of care.

Rudi was saying, “The last I saw of Alexis was two nights ago when he went up to bed. Everything seemed
perfectly normal, and he was talking of making an
early start on the proofs of his book. So when he hadn’t
appeared by eight-thirty yesterday morning, I went up
to give him a call. But he was not in his bedroom.
Then I realized that I’d not seen or heard anything of
Belle, either, and the house was oddly quiet. I went to
your aunt’s room, thinking perhaps they were in there
with her for some reason. But Madeleine was fast asleep, and I didn’t like to wake her. After that, I
searched high and low, and when I went over to the
garage I found that the car was gone. I called next door to ask Sir Ralph and Lady Caterina, but they
knew nothing. We all felt very worried. The whole
morning we kept on hoping that Alexis and Belle
would turn up with some simple explanation, but the
time went on and on. By afternoon Sir Ralph said we
ought to notify the police. They’ve been here ever
since asking questions—and now the MI-Five people.”

“What about Madeleine?” I asked fearfully. “How
has she taken it?”

“Well, you see, she didn’t wake up till midmorning,
and by then it was obvious that something was seriously the matter. Sir Ralph and Lady Caterina agreed with me that the shock might have a terrible effect on Mad
eleine, so we quickly thought up some vague story
about Alexis having to go off on urgent business and
Belle being called away because a friend was ill. For
tunately, she seems to have accepted it—for the
present.”

In the circumstances, I thought, perhaps it was as
well that my poor aunt was so innocently trusting, her
mind quite without the normal suspicions of a logically
thinking person. Alexis had never before gone off at a
moment’s notice and would certainly not have done so
without telling Madeleine himself. And as for Belle,
she’d always seemed to be without any family or close
friends, so it would take a lot of believing that she had
left my aunt stranded to go rushing off to someone
else’s bedside.

I sighed. “At any rate it’s a relief to know that Sir
Ralph and Lady Caterina are at Deer’s Leap. They’re
so often away at this time of year.”

“Yes, it’s a lucky thing. Lady Caterina has been
wonderfully good to Madeleine.”

I should explain that my uncle and aunt lived in a
self-contained wing of the sixteenth-century manor
house which was the family home of Sir Ralph War
render. He and his second wife, Caterina, who had
been a prima donna at La Scala, were delightful peo
ple, kindly and generous. In time of trouble like this it
would be impossible to have better friends.

The fear in his voice released my own stifled terror.
I caught my breath and felt the skin tighten at the
nape of my neck. I could not put a precise name to
what it was we both feared—unknown, faceless fig
ures, working in the shadows. Russian or Czech or
British—the nationality was irrelevant, but all of them
united in fanatical allegiance to the cause that Alexis
had spent his lifetime denouncing.

Their reach was long and powerful. No exile, in
whichever country had given him refuge, could ever
feel completely safe. He and his family would always
be at risk. Even outsiders could be swept into the net
because, innocently, they knew too much. Had these ruthless people come for Alexis, I thought desperately,
and had Belle Forsyth somehow interrupted them?

Suddenly I couldn’t bear to be three thousand miles
from Madeleine. I wanted to be with her. I
had
to be
with her.

“Rudi, I’m coming home. The very first flight I can
get.”

“I can’t help it about my job at a time like this. The firm will have to understand that I’ve got to get home
right away.”

Honeybee by Naomi Shihab Nye
Catch Your Death by Voss, Louise, Edwards, Mark
The Last Road Home by Danny Johnson
The Pistol by James Jones
Sudden Prey by John Sandford
The One For Me (Danver #8) by Sydney Landon
The Doctor's Memories (BWWM Pregnancy Romance) by Nisha Davis
Catch Rider (9780544034303) by Lyne, Jennifer H.
The Mighty Storm by Samantha Towle
At the Edge by Laura Griffin