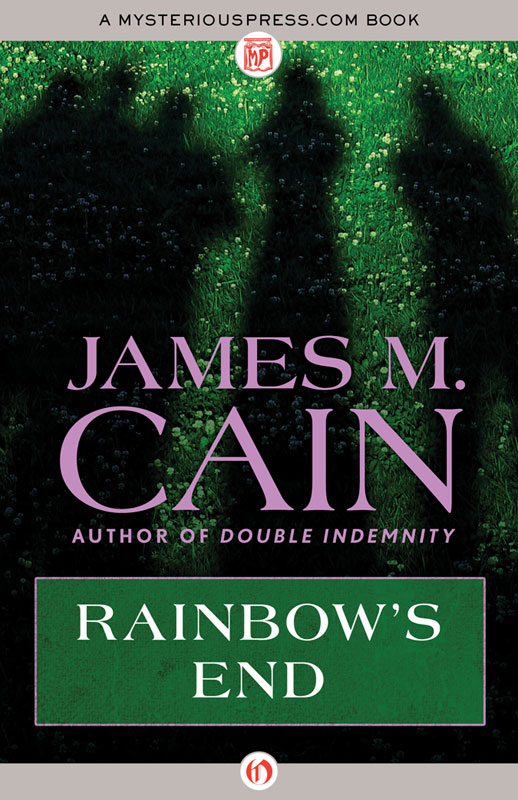 I
T WAS THE SAME
old Saturday night Mom and I had been having off and on since my father diedâor at least the man I had thought was my father. Here lately, the evening got started earlier than it had been starting, as the filling station where I worked was closed, with the sign hung on the pump: “Sorry, No Gas.” So there I'd be, home with Mom. But don't get the idea that things were slow or that time dragged. Plenty was going on, a little too much, for my taste, and too lively. The first partâin the early eveningâ wasn't too bad, just screwy, which, of course, there's no law against. She'd begin talking about how rich we would be by and by, pretty soon, one of these days, and tonight was extra special on account of the rainbow she'd seen late in the afternoon, after the rain when the sun came out.

“And you know, Dave,” she whispered, “what's under the end of that bowâa pot of gold, that's what. It's waiting for us, I can feel itâif we just show some gump. If we take the car next week, go out there and get it.”

“There's a road to the end of that bow?”

Because she'd meant so many things at one time or another, I'd more or less lost track. Like for a while she meant oil, insisting it ought to be drilled for on our land, and then we'd get royalties on it, “thousands and thousands.” I told her southern Ohio was all drilled out. “They used to have oil here,” I explained, “but that was years ago, and there's no more to be hadâon our land or any other.” Then for a while she meant Marriott. She'd read about Marriott in the papers, that he should locate a park on our land, with roller coasters, ferris wheels, and on the river a steamboat ride.

Our place is on the Muskingum, ten miles up from Marietta, or two places, actuallyâsmall farms next to each other that we grew produce on, she doing most of the work, me helping her when I could, with hired labor when we needed it. It's true that steamers once ran on the river, but I didn't know any way of getting Marriott up here. She'd meant other things too, each one goofier than the last, so what she meant now I didn't exactly know, but I let her tell me; I knew I'd have no peace till she did.

“Well,” she began, drawing a long, trembling breath, “this time it can be doneâby us. We don't have to ask nobody. We just up and goâdrive over in our car when we get good and ready to take advantage.”

“Because this time we canâ”

“It's in Maryland. We drive over to Cumberland, which is less than a day's trip, andâ”

So, all that puffing and poofing, and she come up with this. But she was small and young and pretty in her freckle-faced mountain way, and I knew by then that she lived in a world of dreams. So I kissed her and told her: “Fine, we'll drive over to Cumberlandâthat's the place?ânext month when the roads dry off. Right now, everything's flooded, and we'd be up to our hubcaps in water. But soon as it goes down we'll go and buy ourself a ticket.”

“More than one, Daveâwe have to buy a bunch. That way, you're bound to win.”

That wasn't the way I'd heard it, but I went along and for a while kept her company pretending. Then after a while I asked: “So OK, we cash a ticketâthen what?”

“ Then...with all that money we could sell this place, sell the other place too, and sit back andâ”

We had two places because I'd bought a second one after my father diedâher husband, I meanâin addition to the place we had when he was alive. That place he had built himself in the only way he knewâwith a hammer, saw, lumber, and his two hands. A ranchhouse, he called it. He was from Texas, and when he went into the army, he had been put on recruiting duty in Marietta, where she was slinging hash in a lunchroom. She was from Flint, West Virginia, then a coal camp on the Monongahela, now a ghost town, with the mine closed down, though a strip crew has started work on the other side of the mountain. She'd worked first in Fairmont, down the river from Flint, but she got let out after a row she got into. That's when she crossed to Ohio. I asked her once why she came so far instead of picking Clarksburg which was just down the road. “I don't like Clarksburg too well,” she told me, but once when I was over there I found out the reason. She was a Giles, and back of Clarksburg the place is full of Kings. A Giles doesn't come near a King, on account it's not healthy. I'm trying to explain her a little, how being “mountain” caused her to be like she was.

So they got married, she and Jody Howell, and he bought the other place with the money they'd both saved and built the house himself. He built it the way he knew from Texas: square, cut up into four rooms with connecting doors, two front doors, two back doors, a front porch, and a kitchen out in the back yard. However, a house that's perfect for Texas is cold as death in Ohio. When winter came, we almost froze. When I was 16 he came down with galloping TB and sat out on the porch all day with a cup beside him to spit in, “chasing the cure,” as they call it. Then he died. He had never told us he carried insurance, but a check for $10,000 came, made out to me. With the money I made a down payment on the place next to us, $9,000 against the price of $22,000, and we moved to the new house. She was bitter toward him, that he carried insurance for me, “and not one cent” for her. That's when it started up, her acting so peculiar, which is what I'm leading to. I'm not going to apologize for beating around the bush a little bit; the way I feel about it, I could beat around the tree, even a whole forest full of trees.

OK, then, I'll say it: she made passes at me. After talking about the gold, the money we would make one way or another, she'd catch hold of my hand, pull it around her, and draw it across her breast that was full and warm and soft. It scared me to death and then some. I've been trying to say she was mountain, and I'd heard of stuff like thatâof mothers that fell for their boys, and vice versa, fathers and daughters.

It sounds funny, but you have to remember that mountain boys of 16 can load just as much coal as pappy, so when they work in the mines, they get married, mostly to girls of 14, maybe younger. Well, when Sonny comes sweet 16, never been kissed, a goodlooking boy with muscles, mommy's still in her twenties, with ideas no older than that. And of course it kind of works backwards, with pappy and Sissy, soon as he notices her. I'm trying to say when you run into something like that, that you hardly dare to believe, you generally find there's a reason. With Mom, there was her looks on top of her age. She was still in her thirties, and I was just 22. She was medium, verging on small, with dusty blond hair, light blue eyes, pale skin, and freckles, and a body no man could forget.

But I'm still beating around the bush. I'm trying to say: what scared me to death was that if she was mountain, I was too or at least so I thought. It turned out I actually was, though in a different way than I'd supposed. If I was mountain, maybe I wanted my hand to be there as much as she did. I had a horror about it, that we might be headed for something like going over the dam nine miles down the Muskingum.

So all of a sudden I said, “Time for bed.” We both slept on the first floor of the new house, me in the den, her in the dining room. The way the house was laid out, the front door opened onto a hall that led back to the kitchen, and that had stairs in it, leading up to the second floor and a closet under the stairs, for wraps. To the left of the hall, through an arch leading in, was the living room, with a fireplace at the far end, and a double door in the rear wall, leading to a dining room. Beside the fireplace was a door to a small den that was built as kind of an annex to the living room, but mainly to make a sundeck up on the second floor. To get us all on one floor she had me sleep in the den and put herself in the dining room, both of us on cots she bought in town, and under blankets, as she said sheets were “just foolishness” besides being trouble to wash. I felt pretty ashamed but went along. So this particular Saturday night I was no sooner tucked away than there was a tap on my door, and there she was, bringing me cornbread and buttermilk. I drank and ate while she sat beside me in nightie and blue kimono, but with everything hanging open, unbuttoned. I said: “Hey, pull that kimono together!”

“I've seen you too often, especially here lately, and maybe it's nature, but that's not saying it's right.”

“You mean, on account of my being your mother?”

“What do you think I mean? And why don't you mean it?”

That's the way she always talked about it. She always slid past the point, never hitting it on the nose, so it didn't occur to me she might mean something actual. I told her: “Goddamn it, pull that thing together!”

“Did you hear what I said?”

“Did you hear what
I
said?”

She pulled it together at last. Then, as though it was just a funny idea that had popped in her head, she said: “You look so comfortable there in that bed, I wouldn't ask much to crawl myself in right there with you.”

“I wouldn't ask
anything
to kick you the hell out. Here, take this glass and git.”

I drained it and handed it over. She took it and said: “You aren't very nice to me, Dave.”

“You're too damned nice to me.”

At last she got or git or whatever you'd call it, and after I'd snapped off the light, I lay in the dark asking myself, what about it? There was no doubt what she meant. The question was, what did I mean? I was 22, with normal impulses, a little too normal these last two months, since a girl I'd been going with left me flat, turned around and married a guy for no reason at all I could see except that he had a Cadillac. It had rocked me pretty hard, especially at night, which was when that girl and I got together for some great lovemaking. With Mom, I thought my answer was no, but I wasn't sure that it was.