Once the dogs had finished off all the treats, Christy and Ellie put them back on their leads, and joined Lucy on the bench.

“That was really funny!” said Lucy, still wheezing with laughter. “How can Rascal be so heavy? He’s tiny!”

Ellie hugged her. “You’ve just had two dogs jumping all over you, Lucy! And you’re laughing about it!”

Lucy stared at her. “Did you do that on purpose?” she demanded.

“No,” Ellie admitted. “It went a bit wrong. We never meant for them to jump on you. But it’s worked, hasn’t it? You weren’t scared?”

Lucy shook her head, smiling. “I was laughing too much,” she admitted.

“There you are then,” Christy said. “Mission accomplished!”

Lucy frowned. “But I want to know exactly what you’re planning for the final session before the audition on Saturday!” 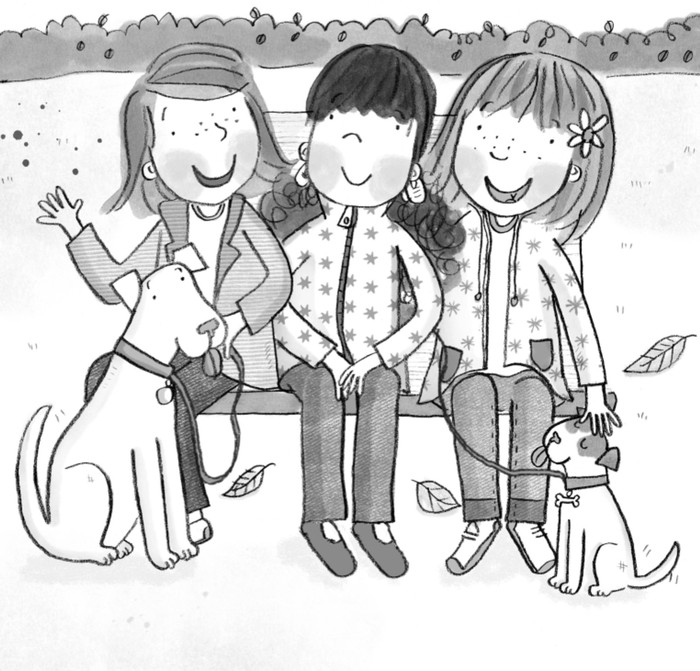 The Biggest Dog in the World 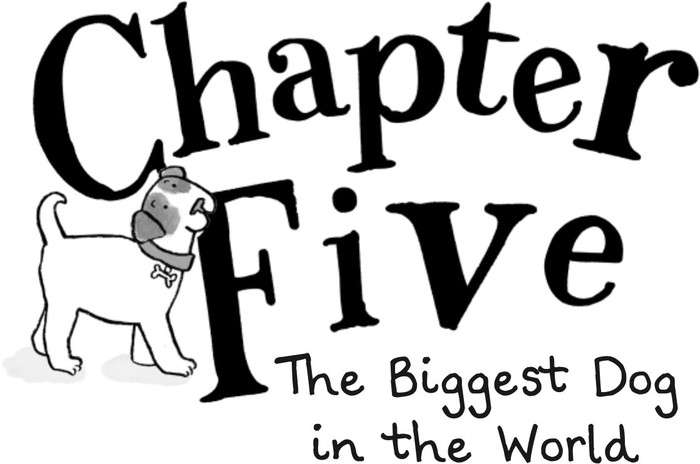 It was Saturday morning, and Christy and Ellie were in Ellie’s living room. They were waiting for Lucy’s mum to bring her round for a last quick de-scaring session before her audition. The girls still weren’t sure exactly what they were going to do. Lucy’s mum wasn’t as used to dogs as Christy’s mum was, and Ellie didn’t think she’d be happy about Rascal and Bouncer jumping all over Lucy.

“What about the same thing again?” Christy suggested. “It worked last time!”

She came back with Lucy following her, and looking rather worried.

“How are you feeling?” Ellie asked.

She did look really pale, and sort of trembly, Ellie realized. “Hey, you mustn’t worry. Come and sit down.” She towed Lucy over to sit next to Christy, who was on the floor. She was leaning against the sofa, with Bouncer’s head in her lap. Ellie sat down next to them, and Rascal immediately curled up on her legs, and
rested his nose on Lucy’s knees, looking up at her and wagging his tail. “See, he wants to cheer you up!”

Lucy giggled and patted Rascal’s head. Then she laughed out loud as Bouncer heaved himself more on top of Christy, so that his nose was close enough for Lucy to stroke too. 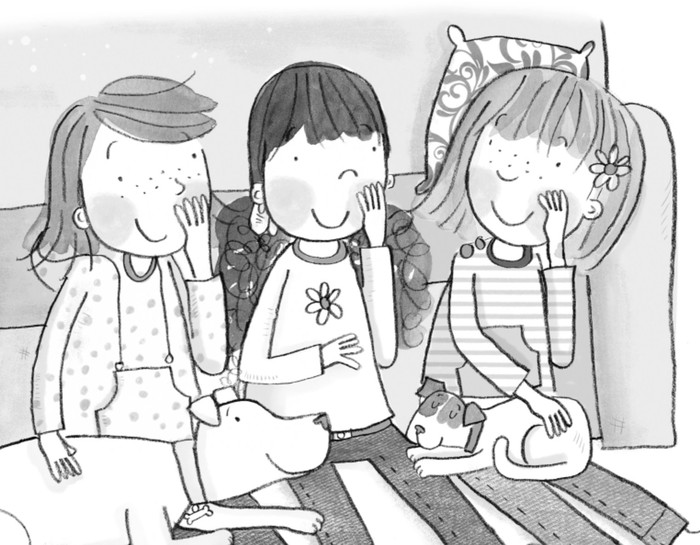 “Ooof, Bouncer, you’re too big for that,” Christy groaned.

Ellie watched thoughtfully as Lucy stroked both dogs, and they nuzzled her back. Lucy looked a bit less nervous already.

“I wish she’d ring and tell us how it went…” Ellie moaned, staring at the phone. “The audition was at eleven, it must have finished by now.”

“I suppose,” Ellie sighed. She looked over at Rascal, snoozing in his basket.

He’d been fantastic at cheering Lucy up that morning. Ellie was sure that Lucy could have told the people at the audition quite truthfully that she liked dogs.

The phone rang, and even though Ellie had been staring at it, waiting for it to ring, it made her jump. She grabbed it out of the holder, her fingers fumbling for the answer button. “Hello?”

“I got the part!” It was Lucy, squealing with delight. “They said I was great, and they wouldn’t usually say straight away, but they thought I was just right!” 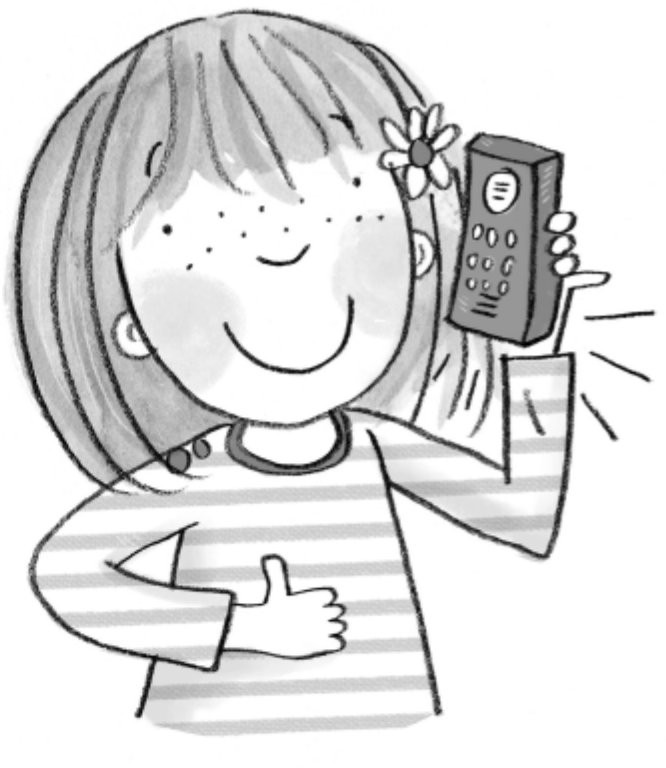 “We’re just in the car now – Mum let me use her mobile,” Lucy explained.

“So was there a dog?” Ellie asked. She knew Lucy had hoped there wouldn’t be.

“They showed me a picture of the dog. He’s really big, Ellie. Really, really big. Bigger than Bouncer, I think. And he’s still only a puppy, it’s a commercial for food for growing dogs. But I can’t imagine that one growing any bigger!”

“Wow.” Ellie could see why Lucy was worried. “Oh! You met Hugo at the Christmas Fair, didn’t you? Remember the enormous Great Dane? Was he like that?”

be one of those. I’m not sure I can cope with a dog that big. The script says I’ve got to do tricks with him! How am I supposed to do that?”

Ellie’s mind was whirring. “OK. Look, the filming isn’t until half-term. We’ve got a bit of time. I’ll see if I can get Jack and Hugo to join in our de-scaring course. I bet Jack would help. And Hugo’s lovely, he’s a big softie, I promise. Don’t worry, Lucy! We’ll sort it out.”

It was Thursday night, and Ellie and Lucy were in the little park close to the village hall where Jo held their dog-training classes. Lucy’s mum was sitting on one
of the benches, chatting to Jack’s mum and Ellie’s dad.

Lucy only had a few more days until the filming of her TV ad, on the Monday of half-term. She’d been getting more and more worried about the dog in the photo all that week, and she’d been asking Ellie every day if she’d arranged for her to meet Hugo, but tonight was the first chance they’d had.

“Why do you have to take the dogs for a walk before dog training?” Lucy asked, looking confused.

“It wears them out a bit,” Jack explained. “That way, they’re better at doing what they’re told.” He grinned. “Hugo needs all the help he can get.”

“And it means they can have a wee before they go into the hall,” Ellie pointed out. “Rascal weed up one of the radiators once,” she admitted. “It was so embarrassing.”

Ellie giggled. “He might flood the hall if he did!”

“Can I stroke him?” Lucy asked Jack suddenly. She’d been working herself up to do it, Ellie realized.

“Course. He’s very friendly,” Jack promised her. “He likes being scratched under the chin and behind his ears.”

Cautiously, Lucy reached out her hand and rubbed Hugo’s soft ears, as lightly as she possibly could.

Hugo looked rather surprised, and his ears twitched as though he thought maybe a fly had landed on him.

“More than that!” Ellie told her.

Nodding, Lucy patted Hugo’s ears a little more firmly, and he closed his eyes and wagged his tail. 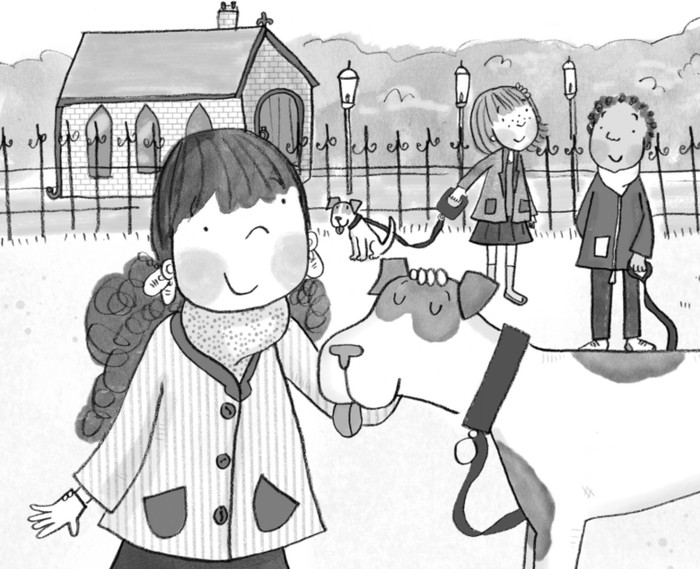 “See how friendly he is,” Ellie pointed out. “Just because he’s big it doesn’t mean he’s fierce or anything.”

Jack shook his head. “He’s never hurt anybody. Well, except me, and that’s only because he tries to sit on me.”

Lucy smiled. She’d stopped looking quite so nervous, and she even laughed as she watched Rascal and Hugo chasing round the park after each other, to work off some energy before the class.

“Ugh, there’s Amelia, and Goldie,” Ellie muttered, nodding at a girl who’d been at their school till that year, and her perfect little spaniel.

“I keep hoping she’s going to move up a class,” Jack said gloomily. “But no such luck.”

“He really isn’t scary,” Lucy said to Jack and Ellie, as she watched Hugo doing his party trick, drinking out of a bottle of water that Jack held up to the side of his mouth.

“See? I told you so!” Ellie said triumphantly. “Now you can go to your film shoot and not worry about that big dog. Everything will be fine.”

Ellie and Jack waved goodbye to Lucy, and dashed off to their class.

“Wow, look at all these extra dogs!” Jack muttered, as they came into the hall.

Several new owners were standing at the side of the hall, most of them looking a
bit nervous. One girl about their age had a Dalmatian puppy, and she looked so worried, she reminded Ellie of how
she
used to feel at dog training.
I don’t worry about it so much now
, Ellie thought to herself with surprise.
Rascal must have got better!

Jo stepped into the middle of the hall to start the class. “Hello, everyone. As you can see, we’re pretty full today. Which means I’d like some of you with slightly older dogs to move up to the intermediate class after half-term.”

Ellie saw Amelia looking smug, and sighed. Amelia and Goldie were bound to move up. Goldie always did as she was told.

“Did you hear that?” Jack hissed.

Ellie blinked. She hadn’t really been listening as Jo read out the names. “What?”

“We’re moving up! Rascal and Hugo!”

Rascal just yawned, but Ellie didn’t mind. He was an intermediate dog now! 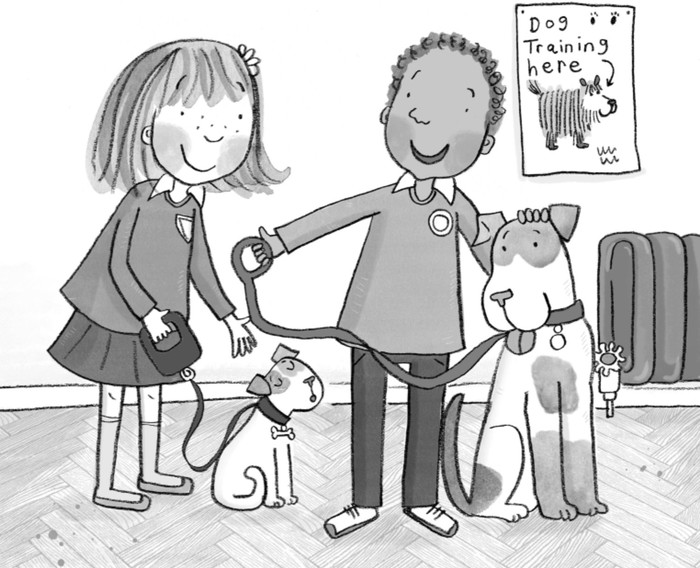 The Howling Delve by Johnson, Jaleigh
Currency Wars: The Making of the Next Global Crisis by James Rickards
Toast Mortem by Bishop, Claudia
The Northern Clemency by Philip Hensher
Raindrops on Roses: Book One of the Favorite Things Trilogy by Millenia Black
Blood Rose by Jacquelynn Gagne
The Bridal Path: Danielle by Sherryl Woods
Love Beyond Expectations by Rebecca Royce
Contract for Marriage by Barbara Deleo
Girl at War by Sara Novic