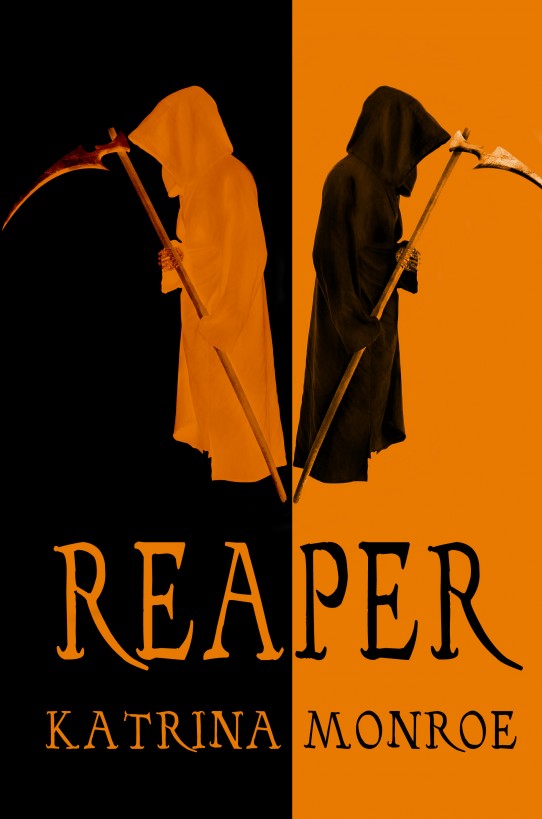 The Department of Creative Death and
Ironic Punishment
. This is where writers go when they die.

Oz, an employee of The Department, is mostly
content doling out death from his ancient typewriter, until he wins
the office lottery. The prize? A new assignment – to return to the
world of the living as a Reaper.

At first, Oz sees this new assignment as a
blessing. He is given a body and a second chance at life, but then,
during a lesson with a surly, seasoned Reaper named Bard, Oz is
forced to watch a childhood friend die. Shaken, Oz questions his
willingness to do the job he’s won.

With each new lesson, Oz begins to wonder if
being a Reaper is really a prize or a punishment.

To Renee for the push, and to
Crystal for everything else.

Death is inevitable for everyone. It was time
for Amelia to bite it, but she was being stubborn. Oz wasn’t a
violent person by nature, but now all bets were off. This was it.
The moment of truth. The moment when she would find herself—

When she would find herself... Fuck.

He knew this character had to die. She
had
to. There was no other good way for the story to go. It
was perfect. Poetic. Just. But how would poor Amelia meet her
maker? A gun to the face or knife to the belly wouldn’t do it.
Well, it’d certainly kill her, but not the way he wanted. No.
Amelia deserved something big and terrifying.

Oz rubbed his temples to nudge his stubborn
imagination. Amelia was stuck in a loop, driving an infinite path
to her aunt’s cabin that would never end if he couldn’t get his
shit together. He could almost feel the poor woman’s full bladder
and caffeine headache caused by the endless pots of sludgy black
coffee his procrastination had forced her to guzzle down.

The hangover definitely wasn’t helping
things. Cotton mouth, gut rot, and a pounding headache, all served
as reminders of the stupidity of last night. The drinking hadn’t
been the stupid part. Granted, had he choked down some food before
hitting the tequila, the stupid probably wouldn’t have
happened.

Jen had said she wanted to talk. Mark was
being an asshole to her again. Oz figured that as Mark’s best
friend he could help. He’d hear her out then bring it back to Mark
with a protective coating of male, non-naggingness. Oz wished he
could say that he’d accepted the invitation to her apartment with
pure intentions. The reality was that he and Mark had spotted Jen
at the same bar at the same time and Mark had cock-blocked him. Oz
bowed out because he knew he couldn’t compete with Mark’s good ol’
boy charm, but Oz still felt cheated. While playing the role of
empathetic listener, Oz intended to cast Mark in a less than
flattering light.

Half a bottle of cheap tequila later, he
found himself searching for his clothes on her bedroom floor,
feeling a twisted combination of triumph and guilt. He knew she
wouldn’t tell Mark, he wouldn’t either, but his nerves were on edge
all morning. Oz couldn’t take Mark in a fight and didn’t want to
try.

The phone rang and he jumped, knocking his
coffee cup from the desk. A few centimeters to the left and he’d
have had scalded skin to deal with on top of it all.

Oz took a breath.
It’ll be fine. Maybe she
doesn’t even remember.

He struggled to pull it to his ear, the chord
twisted in a coil more intricate than a strand of DNA.

“Hello?” he said, hunched over the phone
base.

Praise the Heavens, it wasn’t Jen. But the
caller was the only other woman on earth he didn’t want to talk
to—his mother. She only called when she needed something. Her
one-sided conversations tended to last hours and he really needed
to piss.

Make it quick,
he thought.

His mother exhaled, the sound, he knew, meant
to convey disappointment and pain. Her sighs and groans were like
their own language, known only to Oz.

“Your father’s a bit laid up—”

“—
and I’m going to take him into town
to get him looked at.”

“Anyway, I was hoping you could come by and
burn the refuse pile for me. No telling when your father will be
well enough to take care of it.”

It’d take three hours to drive to the
back-road shithole where Oz’s parents lived and Oz had had no
intention of leaving the apartment without doing some killing. Oz
struggled to refuse, but his mother was the kind of woman who’d win
a gold medal in the Guilt Olympics. She’d brainwashed him early and
thoroughly.

Oh well, Oz thought, didn’t the books tell
amateurs like him that when you’re stuck, a change of scenery helps
jog the brain? The drive might force his hungover brain to forge
new connections. Probably a load of crap, but at this point Oz was
willing to try anything. His deadline loomed and he wouldn’t get
any more extensions.

After hanging up, Oz threaded a new slip of
paper into his typewriter and, still standing, he typed, “There was
a finality to the sound the door made as Amelia slammed it closed
behind her, a finality she failed to notice.”

He climbed into his rust bucket of a car and
slammed the door. Oz tried to hear the finality in it, but only
heard the rattling of something important. Once he’d finished with
the garbage he would tear up that page and start over.

Oz forgot his sunglasses which made the drive
over shittier than it had to be. Didn’t the sun have better things
to do than to hurl its rays directly into the epicenter of his
brain?

He found his parents’ spare key beneath a
ceramic turtle he made in seventh grade that’d seen better
days.

Inside the house, Oz found a note on the
table next to a plate of Girl Scout cookies—thin mints:

Eat these before your father gets home.
Doctor says he’s one tablespoon of sugar away from a heart attack.
Been admitted. Love you.

He stuffed one of the chocolate disks into
his mouth. He patted his gut. One more advantage Mark had. No
wonder Jen had chosen Mark. No point in making a promise to himself
to work out more. He’d never do it.

The burn pile sat at the far left corner of
his parents’ quarter acre backyard. A moat of sand surrounded the
island of refuse. Scorch marks striped the ground.

A rare breeze blew as Oz doused the pile in
lighter fluid. The smell of distant food rode the breeze and
mingled with the odor wafting from the lighter fluid. It turned
sour in his nose and made his eyes water. Why his parents stayed
when the rest of the town—the garbage pick-up, the neighbors, the
only grocery store—picked up and left, Oz would never know.
Probably his dad’s doing. The man saw that house as his own private
fiefdom, and the vacating neighbors only strengthened his claim on
the land.

Oz struck a match into the densest part of
the pile. Flames ate through the upper layer of newspaper. He
inched closer to the fire to feel its warmth. Curls of half-charred
junk mail drifted over Oz’s shoes and ashes twirled in the wind.
Watching the fire sparked an idea. He knew how Amelia would
die.

Oz gripped the toothed end of the rake and
poked the pile with the handle.

He didn’t notice the collection of aerosol
cans until a second before they exploded.

What is time? A relative, non-linear
measurement quantified by hours, minutes, and seconds.

None of those are relevant here.

A tabby kitten, frozen in mid yarn ball
tumble, stared at Oz from a daily calendar on the corner of his
desk. The date read
, March 2
nd
in
loopy script. Whiskers branched from the legs of the ‘M.’ Aside
from a typewriter and two piles of paper, one labeled “Written,”
the other, “To Be Written,” it was the only thing on the desk.
Cubicle walls separated him from the
others
, but he could
hear their syncopated tapping like the hum of worker bees. He’d
come to think of it as music, and would often catch himself humming
along.

Oz tore the tabby to reveal a
marshmallow-white Persian. As expected, the only difference was the
species of kitten. The date still read
March 2
nd
.

The Department of Creative Death and Ironic
Punishment—a beige abyss where windows and sunlight were forbidden,
and no proof that its occupants were once quasi-successful human
beings. This is where writers go when they die.

Oz had been here for thirty years, or a
hundred—ten-thousand, nine-hundred and fifty kittens at last
count—writing hypothetical, but inevitable deaths.

Health nut dies from a heart attack after
indulging in a muffin. He spent the majority of his adult life in
gyms, training with boxing coaches, and he goes down from snack
food. Sugar K.O.

He missed being human. He could write plots
that twisted and knotted, and characters that people gave a shit
about. His afterlife didn’t allow for creativity. Oz wrote what
amounted to tragic one-liners that were agonizingly repetitive,
save for a detail or two. He’d realized only minutes after arriving
in the Department that he hadn’t gone to Heaven—if there was such a
place.

Oz slid the page from between the typewriter
rollers and set it in his “Written” pile.

The voice came from behind him. It was
unsettling to hear voices in The Department unless Oz knew they
were coming.

If not for the vacancy in her eyes, she would
have been beautiful. Long, dark hair. Long, dark body.

She fidgeted with the buttons on her jacket
pockets. “I’m not really sure what I’m doing here.”

He escorted her to the cubicle directly
opposite his. It’d only been vacant a day, or a century depending
on how you thought about it, which Oz didn’t. The previous
occupant, an Italian with a bad attitude and a superiority complex,
had been led away to judgment. It was no secret where he was headed
and the entire department was surprised it’d taken so long for
The Powers that Be
to send him to his own
Inferno
.
And, frankly, good riddance to him. He was a dick.

Reluctant Surrender by Riley Murphy
The Shadows by Chance, Megan
And Then There Was No One by Gilbert Adair
Deep Surrendering: Episode Four by Chelsea M. Cameron
IF I WERE YOUR WOMAN by Taylor-Jones, LaConnie
Twitter for Dummies by Laura Fitton, Michael Gruen, Leslie Poston
Embracing Danger by Olivia Jaymes
At Every Turn by Mateer, Anne
Billy's Bones by Jamie Fessenden
Gypsy Moon by Becky Lee Weyrich