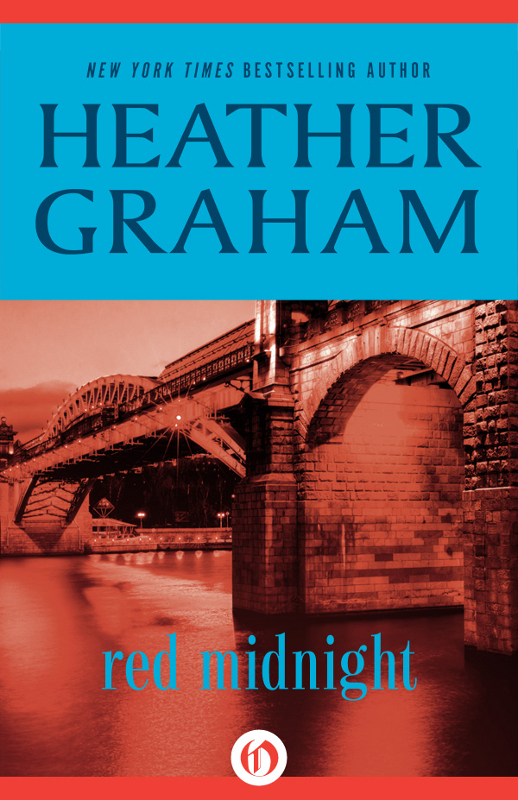 On a trip to the Soviet Union, an American model finds herself stuck in a deadly game of espionageErin McCabe is taking the trip of a lifetime to Soviet Russia. Before she even crosses the border, she has a series of run-ins with the ruggedly handsome American diplomat Jarod Steele. But how coincidental are these encounters? In a flash, Erin finds herself at the center of a wild spy plot, where truth is indistinguishable from falsehood, and the difference between good guys and bad guys is impossible to tell. This ebook features an illustrated biography of Heather Graham including rare photos from the author's personal collection.

For my aunt, Eleanor, who has always been there for me, and for the Russian people, the ordinary people, who made our trip so very warm and extraordinary.

A Biography of Heather Graham

T
HE HALLWAY WAS LONG
and white, white walls, white tile flooring, evoking complete sterility. The man who walked down the corridor was a dark and compelling contrast. His height of six feet two was amplified by a slender physique, broad shoulders tapering to wire-muscled trimness. His suit was of dove gray and he wore it well, its finely tailored angles emphasizing the toned quality of a body well fit for action. His appearance of casual and understated elegance was deceptive: he could turn on a dime and demolish distance in seconds, endure fearful rigors of cold and heat, and tangle with the best, be it a duel of fists or tongue. Ice-blue eyes that never betrayed an emotion were a point of beauty in a face not particularly handsome but ruggedly arresting. Forty years of character were etched into that strong face, capable of compelling great trust—or great fear. The direct gaze of his extraordinary blue eyes could instill chills that raced inexplicably up the spine. Women shivered deliriously at his glance, wondering later what had been the great attraction while still dreaming about feeling that strange caress of piercing blue again, imagining the vital touch of the enigmatic man behind the eyes—a man who exuded a quiet power that was only a hint of what lay beneath the surface.

His footsteps brought him swiftly and quietly down the long hallway, where the white sterility ended in a mass of silver-gray machinery. From floor to ceiling, wall to wall, disks, reels, keyboards, exhausts, and drives exhibited an overwhelming display of man’s ingenuity. In front of the mass of gadgets and technology was a single chair, its metal frame and upholstery gray. The chair awaited the man, and when he was seated, his first action was to slip his hand into a pit below the computer’s screen. Cogs whirred, a light flared. The screen above the man lit into action.

Jarod smiled a bit wryly. Even the computer was sociable and courteous. He punched out a return.

He made no effort to add to his greeting, because he knew the next message coming.

THE DATE IS MARCH 2. TIME, 10.03.28 AM. OUTSIDE THE UNITED NATIONS BUILDING THE TEMPERATURE IS 60 DEGREES FAHRENHEIT, 15.6 CELSIUS. NO RAIN IN FORECAST. NICE DAY, SIR, FOR NEW YORK THAT IS, IF YOU KNOW WHAT I MEAN.

Great! Jarod thought, nothing like a highly technical piece of machinery with a sense of humor. But then Catherine I had been programmed by Neils Weir, who was a genius and a little crazy. The Catherine I and her counterpart across the seas were very lovely ladies. Jarod lifted a brow at the screen and waited. It was sometimes incredible. Catherine I would continue a social commentary on his welfare, monitoring his moves by the laws of probability. Within her memory banks Catherine I knew all there was to know about Jarod Steele.

But this morning Catherine had nothing else to say. Jarod started to punch in a thank you for the information, then remembered a bit sheepishly that he was dealing with a computer, nothing more than machinery. Catherine would not be hurt if he didn’t express his gratitude. He repunched the keys.

In a split second the screen was filled with information. When the computer had completed the file, a command request appeared at the top of the screen.

A screen of new information appeared, but Jarod felt an uneasiness in the pit of his stomach as his lips tightened in a grim line. What he now saw was not what he had expected. Where had this new information come from?

Jarod punched in a new question based on the data that had appeared on the screen.

The answer flashed back immediately.

Frustrated, discouraged, and now concerned, Jarod sat back in the chair, staring at the screen with a frown lining his forehead in deep furrows as he waited. Suddenly he hunched intently over the keyboard, his long fingers fringed at the joints with lighter tufts of the silvering jet hair on his head, with nails short and bluntly cut but immaculate, coursing over the keys as he filled in further information for assimilation. Then he repeated his question, only to receive the same answer. The nagging question of where the new data on Project Midnight had come from remained a mystery.

Baffled, he leaned back in the chair once more, his blue gaze staring at the computer with reproach, as if once again forgetting that Catherine had no human qualities and couldn’t be shamed into answering him. Jarod ran his fingers over his temple, then thoughtfully rubbed a freshly shaved chin. Damn! he thought with disgust. The computer wasn’t human, but he was, and he was making mistakes.

Catherine was a fantastic piece of machinery, but she was only machinery. He was seeking intelligent answers based on assumption: unless he asked for assumptions, she could give him nothing but facts. And now with these recent revelations, the matter had become more complicated.

But if you fed her all the pertinent information and requested the probabilities, Jarod thought, a slight smile flickering across his lips.

Having given Catherine the new data, he reworded his question.

WHERE IS SUBJECT, HUGHES, SAMUEL?

The answer was the one he had feared. He winced as feelings of both sadness and disgusted resignation at Hughes’s probable death made him suddenly tired, very tired. He closed his eyes for a moment and it suddenly became clear to him what might have happened. Sam Hughes had always seemed like such a nice guy around the embassy, but apparently he had got a little more involved in Project Midnight than he should have. He had fallen to the age-old allure of easy riches to be made through treachery. But somewhere along the line he must have panicked. Or maybe he wanted something to hold over the head of someone else, which is what could have accounted for the new information Catherine had acquired. Whatever his reasons, Hughes had fed her with clues, leaving Jarod more confused.

If I could discover what happened, I would have the answer, Jarod thought dryly. But he didn’t have any answers, and so Project Midnight had to remain his first concern. Because if he could trust this new data from Hughes something very dangerous was going on—just how dangerous, Sam Hughes had discovered too late.

Jarod reopened his eyes to the screen, and smiled with little humor. Catherine was apologizing for the information she had been forced to supply.

Jarod began to punch keys, stupidly assuring Catherine it wasn’t “her” fault. He requested another “A” prompt.

Jarod read the file information again, most of which he already knew. But the tail end of Catherine’s listing was useful. A description of someone had been cleverly filtered into the routine information. A description and some kind of a key code.
Mc
… the letters
M
and
c
, as in a name … Jarod tensed as a creeping sensation came over him. Hughes had added these clues, which pointed toward something happening soon. Jarod was more distressed by this information than by any of Hughes’s previous clues. He punched more keys.

A look of chilling intensity filled Jarod’s ice-blue eyes. He punched the stop key, and zeroed in on the last name, the only
Mc
in the grouping. He requested the file on her, his well-wired muscles taut as he waited.

Jarod read on, requesting a portrait. He punched in the necessary color key codes to give the proper hues to the graphics.

Once more he leaned back in the chair, his long, fingers idly brushing his chin as he looked on.

He had seen her before: most Americans had seen her face and figure. Not even the distorted colors and graphics of the computer image could take away from the elegant beauty of her fine bone structure, her liquid eyes, her full pouting lips. Her face was a classic oval, her cheekbones high, her eyes large, wide, well set apart. Winged brows gave her a look of both delicacy and spirit: she could pose as angel or devil. In her career, he knew, she had appeared as both.

It can’t be her, he thought. She can’t be Hughes’s contact. But she could be. He would have to watch her, and it might prove interesting. It was usually the least suspicious person one needed to suspect.

“What the hell would a woman like that be doing going there anyway?” he wondered aloud. “It’s not exactly the place for social butterflies.” Damn! he muttered. It looked like trouble either way. She was going to be his responsibility, just like every American citizen who crossed the border. Even under normal circumstances, he would have noted the name skeptically, bemoaning the fact that he was responsible for watching the antics of this whimsical beauty out for a careless lark. He couldn’t think of her visit as a lark. He had to watch her very carefully, because all the clues pointed in her direction. It seemed incredible.

Or was it? What if she were in on Project Midnight?

Such a beautiful face … And body, he reminded himself dryly, which only served to increase his irritation. Erin McCabe was packaged merchandise; she was a lie, created by those whose products she advertised. What a damn complication.

It could be her—five feet nine, blond, blue eyes …

No, they weren’t blue—the computer showed them as blue. They were actually somewhere between blue and gray, a glistening, beguiling silver. He could see the real Erin McCabe, just as he had seen her on the cover of a magazine recently, hovering over the computer image. He hadn’t realized until now how closely he had looked at that cover. Yes, her eyes were really silver and her hair was a shade between burnished gold and softest platinum, not that common yellow.