Alec described in a newspaper article how he and George “talked” to each other. It was a method that relied on neither Visible Speech nor sign language, nor on the two-handed manual alphabet by which Alec communicated with his mother. For George Sanders, Alec had developed a special glove. He had written on this white glove letters, in spots that could easily be touched, then taught George to use it. “George presented me with the word for some object he desired; we shall suppose the word ‘doll.’ I then covered up the word with the exception of the first letter‘d,’ and directed his attention to the glove. After a little searching he discovered the corresponding letter upon the glove … and so with the other letters.” Once George learned the single-glove system, his fingers could work as fast as fingers on a keyboard. Soon Alec didn’t need to wear the glove: George knew which spot on the hand denoted which letter. “The use of the glove alphabet was so little noticeable,” Alec continued, “that [soon] I could talk to him very freely in a crowd without attracting the attention of others. I took him to Barnum’s museum and talked to him all the time the lions were being fed, and I am sure that no one among the spectators had the slightest suspicion that the boy was deaf.” 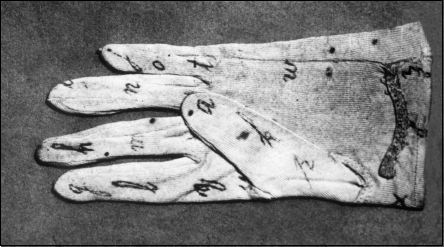 The alphabet glove, with which Alec taught George Sanders to communicate.

Alec marveled at the contrast between the little deaf girl from New York, locked away in an institution because she was “ineducable,” and George Sanders, released from his silent prison by the ability to communicate. It reinforced his conviction that institutionalizing deaf children together was counterproductive, and unfair to those who wanted to live in a larger world. He always insisted that George Sanders should not associate with other deaf children. “I was seventeen years old,” George told a newspaper reporter in 1929, “before I even knew there were any other deaf people in the world.”

In late October 1873, a new student enrolled with Boston University’s professor of vocal physiology and elocution. Mabel Hubbard was the fifteen-year-old daughter of Gardiner Hubbard, a Boston lawyer who was president of the Clarke Institution for Deaf Mutes at Northampton, run by Miss Rogers. A tall, slim girl with thick golden brown hair and a broad brow, Mabel had a wonderfully expressive face. A mischievous smile constantly pulled at the corners of her mouth, and her large gray eyes sparkled with joie de vivre. The previous year her father had seen Alec teach a class at the Clarke Institution, and decided that his own deaf daughter should take instruction from this brilliant young teacher. Mabel arrived at Alec’s Beacon Hill office to discuss a course of private lessons to improve her articulation. She was accompanied by Mary True, a chatty young woman who had been Mabel’s teacher when she was a little girl. Mary now taught at Miss Fuller’s school in Boston and, like Gardiner Hubbard, had met Alec Bell the previous year and been dazzled by his success with the deaf.

When Alec met his new student, he was astounded to see how well she functioned in a speaking world. Mabel had never functioned in any other world, or learned sign language. Despite her youth and hearing loss, she exuded some of the high spirits and confidence that characterized good-looking daughters of wealthy men. The key to her self-assurance was her brilliant ability to read lips: strangers were often unaware she had no hearing. Only the intensity with which she watched her companion’s mouth and her distorted vowels when she herself spoke gave her away. For Alec, she was living proof that if a deaf person was completely integrated into speaking society, she need not be regarded as “abnormal.”

Mabel was less impressed with her new teacher, whom she already considered “a quack doctor.” She had been reluctant to meet the Scotsman, and did so only to keep Mary and her father happy. She did not know what to make of this disheveled figure who looked a lot older than twenty-six. “I both did not, and did like him,” she later recalled. “He was so interesting that I was forced to listen to him, but he himself I disliked. He dressed carelessly and in a horrible, shiny broadcloth, which made his jet-black hair look shiny. Altogether, I did not think him exactly a gentleman.” A gentleman could not have been more polite and respectful than this gauche teacher, but at least his collar would have been clean and his shoes shined. “There was a lack of assurance in the habit he had of passing his hand over the thick high curl over his forehead, a nervousness in smoothing the slight moustache. One felt he desired to put you at your ease while he was hardly at his.” Mabel was even less impressed by Alec’s gloomy office, with its dingy green walls. She gazed out of the window at the gravestones in the Granary Burying Ground, where revolutionary leaders such as Paul Revere lay. Then she glanced around at the bare room, the empty grate, and the hideous flowered rug. It looked like a dentist’s office.

On that gusty fall afternoon, there was no spark of mutual sympathy, let alone attraction, between the self-possessed fifteen-year-old and the preoccupied twenty-six-year-old. When arrangements had been made for Mabel to study with Dr. Bell and the two women had left, Alec’s overwhelming emotion was relief that he had another source of income. He wrote home to Brantford that Miss Hubbard plus his other private pupils from well-established families were “just those calculated to do me good.” As Mabel Hubbard took the streetcar back to Cambridge, she told Mary True that she would take a few lessons with Professor Bell because, if she married within Boston’s wealthy elite, improved diction would assist her to keep up a position in society.

Nothing suggested that this businesslike first encounter would be the start of an extraordinary lifelong partnership. U
ntil her fifth birthday, Mabel Hubbard had enjoyed normal hearing. But then she caught scarlet fever. The bacterial infection made its way from her throat up through the Eustacean tubes to her ears and triggered an intense inflammation for which there was no treatment. It destroyed her inner ear, so that she lost both her hearing and her sense of balance. Her plight was agonizingly common in her day. Before the invention of antibiotics in the twentieth century, common childhood infections like diphtheria, chicken pox, scarlet fever, and meningitis frequently left their victims without hearing, if they survived at all. In Mabel’s day, there were proportionately thousands more deaf people in the population than there are today. While there are no reliable statistics for the total number of hearing-impaired North Americans, according to one estimate in
American Annals of the Deaf,
infections accounted for half the hearing-impaired population of the United States in 1848. The next most common causes of deafness were aging and accidents; only a small percentage of the population was born deaf.

Mabel, however, had a huge advantage over most of the children who lost their hearing in early childhood. Her parents, Gardiner and Gertrude Hubbard, were well aware of the stigma attached to deafness in their circles and were determined not to ship their cheerful little girl off to an institution or allow her to dwindle into a silent recluse. They shared an unassailable belief in
progress,
and the confidence that, in the second half of the nineteenth century, a solution could be found for any problem. Mabel would continue to be a vital member of their family, their world. They did not even assume that sign language was the only form of communication available to her.

Until faced with the challenge of Mabel’s deafness, the Hubbards were just another wealthy, successful, and utterly conventional New England family. Gardiner Hubbard, a tall, thin-faced, wiry man with deep-set eyes and an Abraham Lincoln beard, mixed with the best of Boston’s rather haughty Brahmins. A graduate in law from Dartmouth College, he belonged to a posh Boston law firm; he was detached in manner and rarely lost his temper. But Gardiner’s aloof exterior was deceptive. As the grandson of an Irish immigrant who had made a fortune in Boston real estate, he was a shrewd operator. He reflected the heady optimism and get-up-and-go spirit of an open-ended era of finance capitalism, when there were no securities regulations, much abuse of the stock market, and a mania for “progress.” Gardiner was always looking for opportunities to improve things, and to make a penny in the process. It was no accident that, of all the branches of law that Mabel’s father might have chosen, he had become a patent lawyer, with a special interest in mechanical and electrical inventions. He had noticed that it wasn’t only the inventors responsible for technological breakthroughs who were making fortunes: their backers and lawyers were also getting rich.

Early in his career, Gardiner had shown that when he set his mind to something, he went after his goal like a terrier. First he pursued Gertrude McCurdy, daughter of a successful New York dry goods merchant, until she agreed to marry him in 1846. Next, he bought a forty-five-acre meadow between the Charles River and Brattle Street, in Cambridge, and built a splendid home on the edge of it. Then he set about upgrading the public utilities. In the 1850s he founded the Cambridge Gas Light Company, promoted a new waterworks, and established a horse-drawn railroad service between Cambridge and Boston. Once these civic improvements were in place—and the value of his property had quadrupled—Gardiner Hubbard started building houses on his estate to sell. At the same time, he kept an eye on the rapidly expanding field of telegraph technology. Gertrude Hubbard treasured this photograph of herself and her second daughter, taken before scarlet fever robbed Mabel of her hearing.

Gardiner Hubbard’s brusque ambition was softened by the gentle manner of his wife, Gertrude McCurdy Hubbard. Gertrude Hubbard was a tall, square-jawed woman with a melodious voice and eyes as determined as they were gentle. Throughout her life, she emanated an aura of goodness and serene optimism. Her tact and helpfulness represented the womanly ideal of her period: service crowned with self-effacement. The Hubbard marriage was a harmonious partnership, and their large two-story clapboard mansion at Number 146 Brattle Street teemed with relatives and children. Gertrude’s aunts, uncles, and cousins often visited. Tragedy struck the Hubbards in 1848, when their first child, a son, died in infancy, but the following year Gertrude gave birth to a healthy daughter, named Gertrude after her mother and always known as “Sister.” After Mabel’s birth in 1857 came two more girls, Grace in 1859 and Roberta in 1861. The four little girls were raised, dressed, and taught according to the upper-middle-class pattern of their era. This meant starched white pinafores, fastidious manners, regular attendance at the local Presbyterian church (and dark suspicions of “papism”), and the prospect of following their mother into lives of refined domesticity. His eldest daughter was Gardiner’s favorite, but Mabel was an attractive child, with her apple cheeks, sparkling gray-blue eyes, and serious manner. She was also the most bookish: she would sit for hours with a picture book, for example, or converse gravely with her father about her toys.