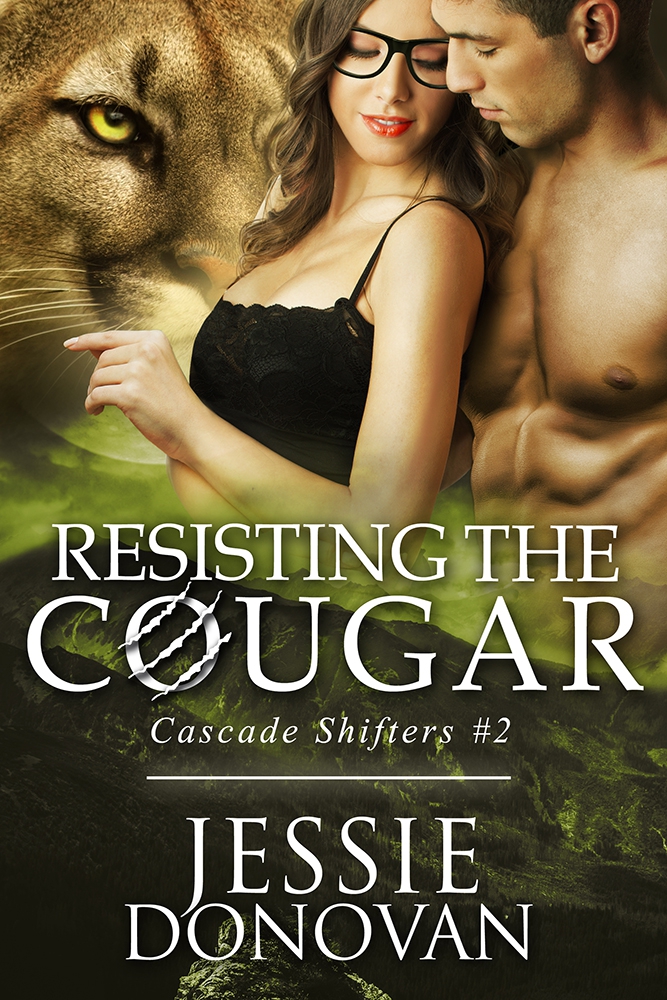 Sacrificed to the Dragon Excerpt

To all of my nephews and niece

Without them, my child characters would be a lot less awesome.

So much for technology making life easier; it always failed when Claire needed it the most.

Pulling over to the side of the road, she put the car in park and laid her forehead on the steering wheel. If only she had thought of a back-up plan. Reading the directions earlier had made everything seem so simple. What she hadn’t accounted for was the low-level fog a few miles back.

Think, Davis, think.
She wasn’t the head of the Shifter Equality Alliance by luck. Stubbornness was her middle name, and she wasn’t about to give up. Especially since her upcoming meeting was important. No, scratch that, the scheduled meeting with the cougar-shifters was goddamn historical.

Kian Murray had invited her to DarkStalker’s land through a human acquaintance they shared. Because it was illegal for her, or any human, to be on any shifter’s land without the federal government’s permission, she’d been given detailed directions to help hide her true destination. Once she reached the final location in the directions, a DarkStalker sentry, named Aidan Scott, would blindfold her and take her the rest of the way.

She’d made it to step number forty-three out of forty-five before the fog had prevented her from finding her next landmark. So close, yet so far.

The number of steps jogged her memory. Raising her head, she then switched on the interior car light and picked up her printed directions. Scanning the page, she reached the end. “Aha. I was right. I’m only a few miles from the final destination. Maybe if I honk my horn and sit here, the cougar-shifters will find me.”

Since she was alone on a tiny mountain road, the noise wouldn’t attract any humans. Only a fool would try driving these mountains in March with snow still on the ground.

Well, a fool or a woman on a mission. The Shifter Equality Alliance, or SEA, needed this meeting. Without the shifters’ help, SEA’s push to make shifter-human marriages legal was doomed according to every set of data analyzed in the last few months. Clan DarkStalker was her best chance at making that happen. She needed to make the meeting, at any cost.

Taking a deep breath, she pressed the horn and held it for fifteen seconds before releasing it.

Claire scanned her surroundings, but five minutes later, she was still sitting in her car with no cougar in sight.

If at first you don’t succeed, try, try again.
The saying might be childish, but it pretty much described how she’d run her life over the last five years.

Placing her hand on the horn, she geared herself for the noise and pressed down. Rather than make it a straight noise, she beeped the horn to “Row, Row, Row Your Boat.” Maybe the kids’ song would signal she wasn’t a threat.

As she waited in silence again, she kept a look out for any cougars. Eventually, they had to find her.

She refused to think about the alternative.

Aidan Scott swished his tail as he paced back and forth in his cougar form, the snow crunching under his paws.

The human was late.

If it were up to him, he’d wait five more minutes and then return home. Humans were certainly not worth his paws freezing in the late season snow. Just because his animal-half could survive in the cold didn’t mean he enjoyed it.

However, his clan leader, Kian, had chosen him for this special assignment and he would do anything for the alpha of the DarkStalker cougar-shifters. After all, Kian had been there when Aidan had needed him the most. Aidan wasn’t about to repay the debt by abandoning his leader because of Aidan’s own prejudice.

If his leader said the meeting with the human female was important, he would treat it as such. He only hoped the human wouldn’t betray them. From his experience, they tended to be good at doing exactly that.

A loud noise echoed through the forest and he pushed aside everything to focus. Scanning from left to right, he didn’t see anything in the trees apart from the other animals. If there was a threat, it wasn’t immediate.

He was fairly certain the noise had been a car horn honking in the distance. Since no one stumbled into these mountains by accident or bothered to look for the best backcountry hikes during early spring, the sound was either the human female or one of the anti-shifter extremist groups.

Given that Clan DarkStalker was hiding a human female named Lauren on their lands, it could just as easily be the latter as the former. He needed to assess the possible threat.

Aidan picked his way through the forest, careful to keep to the shadows and the branches of the trees. Thanks to his tan hide blending in with the trees, no one on the ground would know he was there.

He was nearly to the single-lane road that wound through this section of the mountains when the horn blared again in some kind of rhythm. Thanks to his supersensitive hearing, the sound sent shivers of pain down his spine. It took everything he had to stay on the branch under his feet. The noisy intruder had to be on the road.

Reaching the edge of the woods, he surveyed the area to look for the car. However, a low-level fog had rolled in and he couldn’t see anything more than a foot in front of his face.

Fucking fantastic.
He’d have to go in blind.

Well, I’ve been meaning to brush up on my hunting skills anyway. I’ll use this as an opportunity. I just hope the person doesn’t run me over.

Aidan had no desire to be road kill.

After crawling down the tree, he kept his body low to the ground as he approached the road. No car headlights beamed nearby, nor did he hear an engine running.
Good.
That would make his plan easier.

Inch by inch, he crawled until he could smell the still-warm oil of a car engine. Two more feet, and he could make out the shape of a dark SUV. Shifting his weight, Aidan jumped to the roof of the car. Someone screeched inside. Every cell in his body itched to attack and protect the clan, but if the human female was inside the car, his clan leader would never forgive him.

He moved his head and peered inside the driver’s side window. A brown-haired, plump female with glasses was leaning over her steering wheel, no doubt looking for something in the fog.

Since her description matched the female named Claire Davis in his assignment brief, he tapped his claws against the window. The human turned her green eyes to his face.

To her credit, she didn’t scream or shout. Rather, her brows came together. She looked irritated.

As if she had the right to be irritated.
She was the one who’d gotten herself lost and scared every creature in a five-mile radius.

Jumping off the roof of the SUV, Aidan decided enough was enough. He needed to shift, guide the human to his leader, and then move on to something better worth his time. Concentrating, he imagined his body changing shape.

Claire’s heart was still beating a million times a minute as the amber-eyed cougar jumped down from the roof of her car. To say the big cat had scared her was an understatement.

However, as the cougar’s paws became hands, his face changed into that of a human male, and his tail disappeared into his back, her brain blanked at the tall, naked, and very muscular man standing outside her car window.

Darting her eyes down, she confirmed that yes, he was indeed naked. Even in the cold, the rumor about shifters and their cock sizes seemed to be true.

Stop thinking about the shifter’s cock.
She wasn’t a naïve shifter groupie; Claire knew full well how nakedness was dismissed without a second thought among shifter clans.

With one last long look of his chiseled abs and light spattering of dark and gray hairs on his chest, she met the shifter’s eyes. In human form, they weren’t amber but brown, and currently filled with irritation.

Flipping the key in the ignition once, she rolled down the window. “Hello. Are you Aidan Scott?”

The man growled. “That’s all you have to say? You’ve been creating a damn ruckus for the last fifteen minutes. The animals in the woods must be terrified.”

Remember, you need him to guide you to DarkStalker’s land. Be nice to him.
“Sorry, I was lost.”

He grunted. Just her luck she’d be assigned a grumpy-ass shifter.

Thirty seconds ticked by in silence. The man didn’t so much as shiver in the cold.

If the muscles and sneak attack hadn’t already proven he was a soldier, the shifter’s ability to withstand any circumstance without blinking an eye would’ve done it.

Another thirty seconds ticked by. She tapped a finger against the steering wheel. If he wasn’t going to talk, then she would. “I apologized. If you’re waiting for me to beg for your forgiveness, that’s not going to happen, buddy.”

As soon as the words left her mouth, Claire wished she could take them back.

She opened her mouth to try to soothe the situation, but the shifter male beat her to it. “I don’t have time for your chatter. Grab your stuff and follow me.”

The shifter male turned and walked away. After a quick glance to his round, firm ass, Claire scrambled to roll up the window. Picking up her duffel bag from the passenger seat, she climbed out of the car and locked it. The shifter was already more than fifteen-feet away. She muttered, “Slow down and give a girl a chance,” as she half-ran to his side. By the time she reached him, she was a little out of breath. Fighting for shifter equality didn’t leave a lot of time for exercise.

The shifter, who still hadn’t confirmed he was Aidan, said, “We’ve wasted too much time with your antics. Try to keep up.”

As their feet crunched in the snow of the woods, she eyed his bare feet. The cold had to be painful.

Normally, she’d hold back and be polite. Hell, how many politicians had she met in Olympia and convinced to support her cause? She could be proper and dignified if she tried. But considering the shifter male was walking stark naked next to her, she figured formalities were out the window. Before she could convince herself otherwise, she asked, “Are you really going to walk how ever many miles naked in the snow? Won’t you catch a cold or pneumonia or something?”

Aidan’s brown eyes glanced to her and then back in front of them. “I don’t need your concern. I know what I’m doing.”

She managed to keep her mouth shut. If the man wanted to freeze to death, then that was his prerogative.

Claire, however, dug out her gloves and put up the hood of her winter jacket. Rather than suffer the cold in silence, she tried talking again. “Even if you have super-shifter body heat and don’t have to worry about pneumonia, I do. Please tell me there’s a car nearby.”

“You’re the one who got lost. Both of us suffering in the cold is your fault.”

She blinked. After so many years of dealing with passive-aggressive behavior in Seattle, Claire wasn’t sure of how to deal with Aidan’s straightforwardness.