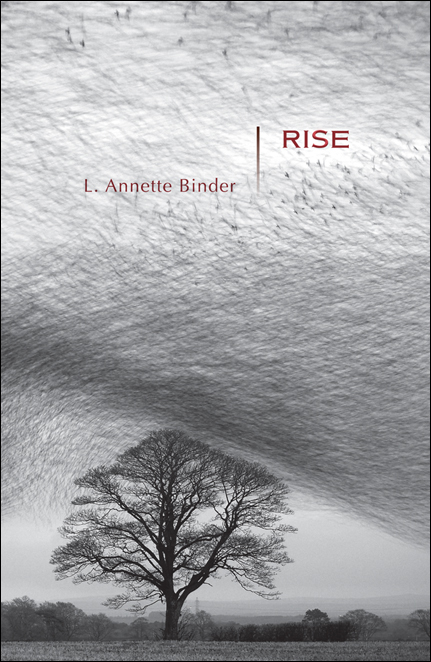 No part of this book may be reproduced without written permission of the publisher. Please direct inquiries to:

“Winner of the 2011 Mary McCarthy Prize in short fiction.”

Cover photograph: “Starlings” by Danny Green, an award-winning natural history photographer based in the UK.
www.dannygreenphotography.com
.

For my parents and for David and Georgia Lee

These stories, sometimes in slightly different form, appeared in the following publications:

One Story
and
The Pushcart Prize XXXVI: Best of the Small Presses
: “Nephilim”

Thank you to everyone who read these stories and helped me improve them:

John Reed and his band of midnight pirates.

Laura Kasischke, who saw something in these stories.

A million thanks to Sarah Gorham, Kirby Gann, Caroline Casey, and all the folks at Sarabande Books for their support of this book and for all the great work they do.

My father, Gerd, who shared with me his love of books and history, and my mother, Helena, who has told me since I was seven that I have a very good vocabulary. I could wish for no more loving and supportive parents.

I
t occurred to me, while reading L. Annette Binder's collection
Rise
, that perhaps the most magical skill a true storyteller possesses is the ability to restore to the reader the sense of what a strange voyage we're on, this life. It seems that this strangeness of life would be evident at all times, but the fact is that, except during moments of heightened awareness, the edges get dull, the awe boils down. Things are what they are, and they fail to astonish.

But, while reading
Rise
, each time I put it down, I found the colors brighter, the objects around me more intriguing, the dialogue overheard more full of portent, and the whole idea of
story
âhow it can be both a craft and just the weirdness of
what happens
âmore alive.

What a heroic feat!

L. Annette Binder has gone so deeply, and with such mystical brilliance and loyalty, into her own world that she has brought mine to me in high relief. Or, she has climbed a rickety ladder to get the view from up there in order to share it with me. Or, she has spent the night out in the orchard, listening in on what the worms in the apples have to say. Or, she has risked a fortune on a number, and, lucky for me, has won.

This feeling that she was helping me, via her stories, to
see
differently caused me to recall an anecdote told by the anthropologist Richard Grossinger in his book
The Night Sky
. He writes of an
experience he had while doing research on people who believed they had been abducted by aliens:

At a UFO meeeting that I attended in the basement of a bank in Hamtramck, Michigan, the gathering was told that it was honored by visitors from Venus and Saturn. I looked around the room, and suddenly everyone appeared strange and extraterrestrial. Everyone was a candidate.

There are moments like this in lifeâbright flashes of intensity. Some kind of defamiliarization has taken place. We see it all differently, however briefly. But there aren't very many of them.
Rise
reminds us that real storytellers exist to bring these experiences to us.

To everything she sets her fabulist eye on, L. Annette Binder brings this intensity. Like all of our best storytellers, she reacquaints us with our world. Borges would have recognized this genius, as would have Poe, O'Connor, and Mann. Like these writers (and others whose writing she recallsâCormac McCarthy, Joan Didion, Steven Millhauser, the Brothers Grimm), L. Annette Binder brings word to us from beyond the quotidian of what is always there. She both casts a spell and breaks it. To experience
Rise
is as much to experience wonder (again, and as if for the first time) as it is to read a collection of wonderful stories.

F
reda weighed eighteen pounds when she was born. Her feet were each six inches long. At ten she was taller than her father. Five foot eleven and one half inches standing in her socks.
I can't keep you in shoes
, her mother would say, and they went to Woolworth's for men's cloth slippers. Her mother cut them open up front to leave room for Freda's toes. She'd stitch flowers in the fabric to pretty up the seams, forget-me-nots and daisies and yellow bushel roses.
Some of your daddy's people are tall
, she'd say.
Your Aunt Mary had hands like a butcher. By God her grip was strong
, and they sat beside the radio while her mother worked the needle. They listened to
The Doctor's Wife
and
Tales of the Texas Rangers
.

Sometimes she felt her bones growing while she lay in bed. This was when the sensation was still new. Before it became as familiar as the pounding of her heart. The house was quiet except for the planes out by the base and Tishko behind the Weavers' house, who barked at the moon and stars.
That dog's got a streak in him
, Mr. Weaver always said.
I bet he's part wolf on his momma's side
, and Tishko was out there howling and the summer air was sweet and her bones were pushing their way outward. Stretching her from socket to socket.
There's nothing wrong with you
, her mother said.
You're pretty as a Gibson Girl. You just had your growth spurt early
, but Freda knew better. She knew it when she was only ten.

God was a blacksmith and her bones were the iron. He was drawing them out with the hammer. God was a spinner working the wheel and she was his silken thread. Seven foot even by the time she was sixteen and she knew all the names they called her. Tripod and eel and swizzle stick. Stork and bones and Merkel like the triple-jointed Ragdoll who fought against the Flash. Red for the redwoods out in California. Socket like a wrench and Malibu like the car, and she took those names. She held her book bag against her chest and took them as her own.

Her house had been her parents' house. They'd bought it new when Freda was nine. A split-level built in 1951 that cost seven thousand dollars even. She was thirty-seven now and sleeping in their bedroom. It had low ceilings and low doorways, and she knew all the places she needed to stoop. Every three weeks she cleaned the upstairs windows by standing on the lawn. She used a bucket with hot vinegar water, and she didn't mind the smell. There was a blue jay nest in the eaves up there, and they really fouled the panes.

“Lady what's your problem.” A little boy was standing on the sidewalk with his bike. He had a shoe box strapped to the rack behind the seat. “I never saw a person big as you.”

“These blue jays are my problem,” she said. “Look at the mess they're making.”

“I bet they got a nest up there. My momma says they're pests.”

“We're new,” he said. He pointed four doors up to where the Clevelands used to live. “We're in the yellow house but my momma she's gonna paint it because it's much too bright. But she can't right now because of the fumes. In September I'm starting at the Bristol School. That's when I'm getting a brother.”