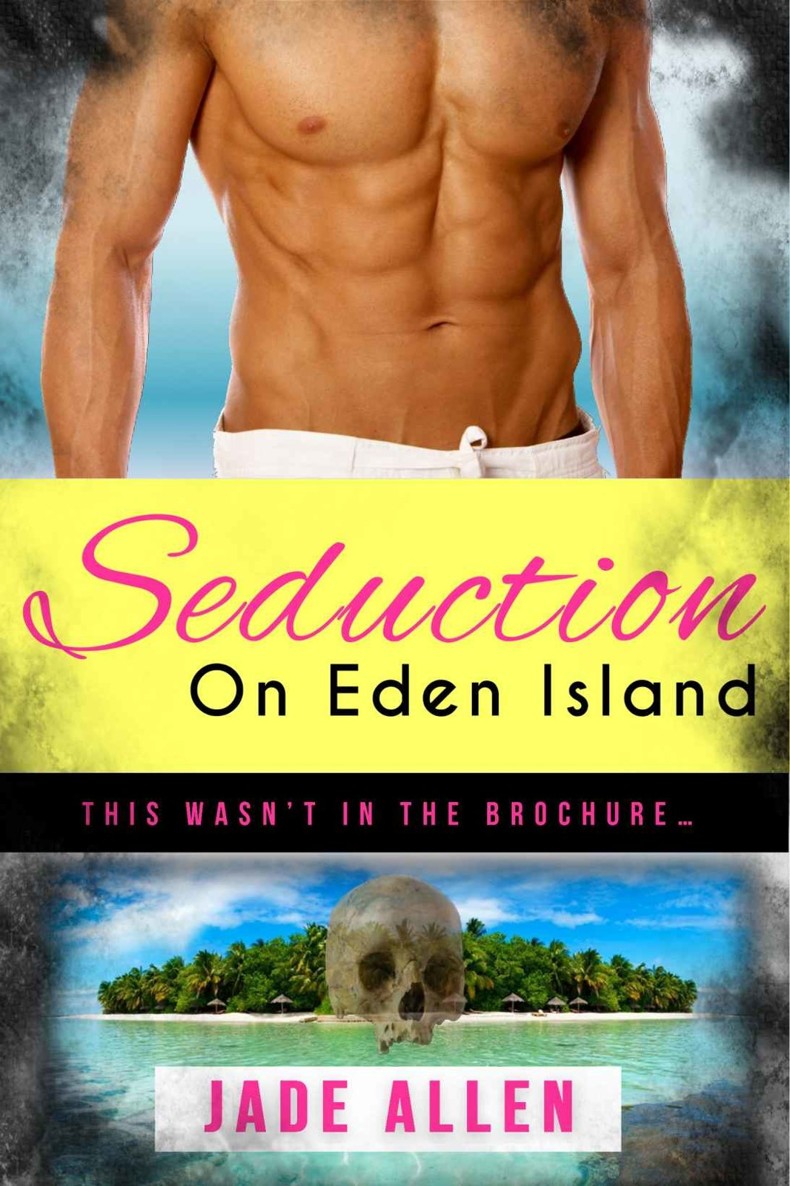 All rights reserved. No parts of this book may be used or reproduced in any form without written permission from the author, with the exception of brief quoted passages left in an online review. This book is a fictional story. All characters, names, and situations are of the author’s creation. Any resemblances to actual situations or to persons who are alive or dead are purely coincidental.

This e-book is licensed for your personal enjoyment only; this copy is not available for resale or to give to another reader aside from any transaction through Amazon’s e-book lending program.

This book is intended for readers age 18 an over. It contains mature situations, sexual content and horror elements that may be objectionable to some readers.

Finding out on national television that her long-term boyfriend is a cheater, mild-mannered HR manager Rayne Baker throws caution to the wind and accepts a mysterious invitation to an exclusive new tropical resort.

But not is all as it seems on Eden Island; there are mysteries behind every bend.

After making a horrifying discovery, Rayne and her sexy cohort are on the run. Will they make it off the island? Will they discover what’s making the guests disappear? Who can she trust?

On Eden, no one can hear you scream.

Want to be the first to hear about my upcoming books and giveaways?

Sign up for my newsletter by visiting
www.redlilypublishing.com
or by clicking
HERE
!

There was blood everywhere. It coated the walls, the floor--there were even spurts on the ceiling. Rayne held a double-ended canoe paddle in both hands and braced herself;
this was not in the brochure.

Rayne had woken groggily on the private jet; she had slung back far too many gins and her head ached.Twenty four hours ago, she had sat at her cubicle mopping smudged mascara, trying to explain to a group of disgruntled accountants why all the fridge contents had to be cleaned out the previous day.

“There were intelligent life forms growing in that petri dish of yours. We had no other choice but to abide by OSHA regulations before new forms of sentient life became a real problem for us. You handle multi-million dollar accounts and can find a tax loop-hole in the eye of a needle; why can’t you keep an eye on the expiration dates of your food?”

After another thirty minutes of discussing the implied freedoms of the communal fridge, Rayne lost her nerve and threw a fistful of snotty tissues at the group. “Could you please just get the fuck out of my cubicle and get back to work? If a gross fridge was my biggest problem today, I would be your all-singing-all-dancing kind of HR manager, but I’m not. Get out!”

After threats of common assault were bantered about, Rayne’s director, Rod, stepped in and sent the grim accountants back to their floor. In a gush of bubbly snot and stinging black tears, Rayne revealed it all: her boyfriend of five years, Jason, had been photographed with another woman, an infamous socialite with a penchant for little dogs. Jason was a statistician; not exactly a sexy job, but he had boyish charm--and apparently wandering hands. The photo had been taken when they were sitting together, and from the torso up it looked fine, but the camera caught activities happening below the small table they sat at.

Rayne had only become aware of this when the pixelated version flicked onto her TV screen as she was cooking dinner at home. Within moments, her phone had scuttled off the kitchen bench in the dance of the many silent vibrations. Her social media page had gone bonkers, too, with strangers and journalists trying to contact her. Jason never did come home--
turned out he wasn’t at a statistics and budgetary meeting that day after all
.

Rayne was gently guided from the building by Rod and was told to consider an extended break until the media buzz died down. Floating past the newsstands filled with full-page reproductions of her boyfriend’s cheating--or, more likely, the unabashed shame of the socialite--Rayne ambled to the subway, pulled out a worn paperback from her bag and settled onto a bench to immerse herself into a story where the almost-fiancés weren’t caught out on national media cheating with pretty socialites.

Several people had joined Rayne on her bench; one was a stylish woman with a glossy blonde bouffant, designer coat and black patent stilettos. The woman was flipping mindlessly through a thick glossy fashion magazine, paying only slight attention to the fashion spreads. A rush of air across the platform signaled the arrival of another train. The woman folded back several pages of her magazine and tucked it under arm as she hoisted her large leather tote and stepped into the crowd of commuters, disappearing among the throngs of beige trench coats and black jackets. Just as the train was pulling out the station, sucking another gush of air from the platform, Rayne felt a frantic fluttering at her side; a business card had lodged itself into the slats of the bench. Rayne picked it up and was surprised by the weight. It was made of a very luxurious bright white card stock but felt like it contained something heavier--almost as heavy as a credit card. Pressed cleanly into the card were crisp black letters in a take-no-prisoners serif font:

The other side just had a cryptic web address of letter and numbers. Rayne looked back to see the final train carriage disappear from view;
the woman must’ve dropped this.
Rayne tucked the card into her book and continued reading, deciding to check out the website once she was within Wi-Fi reach and see if she could drop the card off.

Despite the lust and romance that sprinkled the pages of her favorite books, opening the door of her brownstone apartment brought Rayne back to her immediate future. Mentally exhausted, Rayne began to boil water for tea, getting out her favorite mug. Remembering the special business card tucked in her book, Rayne scrabbled around looking for it before booting up her laptop.

Dropping onto the couch, Rayne turned the card over in her hand and carefully typed in the long URL, double-checking the letter and number sequence twice. Within a fraction of a second of pressing the enter button, Rayne’s screen went black.
Of all the people in the world to type in a link to a virus…

Then, the screen faded into white; a set of black letters materialized and faded in a gentle sequence:

“Welcome to Eden. You have been selected to join us for an exclusive getaway. Disappear into a tropical island paradise. For your eyes only.”

The screen changed to show expensive resort imagery with sweeping tropical landscapes. After one rotation through the images, a registration screen popped up demanding details. Rayne searched the static page looking for contact details, but there was nothing.

I can register, but I’ll explain that it was a mistake and I’m looking for the right person.

Rayne typed in her details and, after a moment of hesitation, pressed ‘submit’.

Another screen popped up among a new gallery of resort images: “Thank you for registering. One of our resort team members will contact you shortly.”

Rayne opened a new search window and typed in “Eden Resort,” only to get back tens of thousands of possible clues. She extended the search with “island paradise,” only to whittle a couple of thousand from the list. Before Rayne could contemplate another search term, her landline phone started ringing.

“Hi, is this Rayne Baker?” a bubbly woman’s voice echoed down the phone.

“My name is Cassandra from Eden Resort. We just received your registration.”

Wow, that was fast.

“Look, I’m glad you called because I actually think this invitation was for someone else.”

“Was there a name on the card?”

The woman’s voice brightened, “In that case, it’s very much your card. This is part of a secret promotion Eden Resort is hosting prior to its official launch; I believe a few cards were distributed through random circulation."

Rayne could hear typing and clicking in the background. “You’re actually very lucky, Ms. Baker. I've just checked the reservation, and it seems that you have been assigned the Lotus Suite, one of the most expensive suites on the island. There’s yoga, massage and private dining included in your package, which… yes, you’re entitled to over $18,000 worth of value for a six day, seven night stay.”

“Yes.” The disembodied voice was practically beaming down the phone.

“Do I need to purchase anything for this?”

The woman laughed, “No, not at all. It’s an exclusive invitation. A bit like what travel agents get to review resorts.”

Rayne sat, astounded by the opportunity that landed in her lap. “So, when do I leave?”

Rayne massaged her temples and smacked her lips together, desperate for a steward to provide her with a glass of water. She had been hauled out of bed at 4 am and taken by private car to a private airport where she had boarded...a private plane.

There were two other guests on the plane, though none had yet to say hello. The first she met was a man with stiff, swept back blonde hair, a gingham shirt and beige slacks. Despite the ungodly hour, he seemed preened and ready for a midday outing. The Tommy Hilfiger wannabee deemed Rayne worthy of just a small nod before staring pointedly out his window.

Okay, not to worry--he’s just one prick.

The second guest had arrived as Rayne was just tipping back the final contents of a fresh mimosa: a stunning woman with a magenta pixie-cut. The woman was swimming in furs, constantly peering over her sunglasses.

It was at this point that Rayne had to admit she felt underdressed. Her ensemble of dark-washed jeans, leather boots and layers of cotton jersey stood in another world. The magenta vixen had chosen to associate with the blonde bastard behind her.

The conversation between the two guests seemed to bubble along pleasantly enough, though they seemed to be discussing designer brands as though they were people. Then it dawned on Rayne that they actually
did
know the designers and they were talking about them.

The magazine, the fashionable woman; the ease she had walking in stilettos,
who was that woman who was supposed to have this card? I’ve made a grave mistake…

Before Rayne could think of a surprise illness that would send her back home, there was an insistent tap on her shoulder. Turning, Rayne came face-to-face with the magenta pixie, a fixed smile emblazoned on her professionally made-up face.

“Hi there, I don’t think we’ve met. My name’s Billie Toms,” she held out her hand.

“You’re not of the Baker House Fashion family, are you?” Billie’s eyes widened.

“No, I’m afraid not. I’m of the…” Rayne thought
screw it
“I belong to a prominent financial institute; unfortunately, my terms of agreement don’t allow me to mention the company’s name.”
Where was this coming from?

“So you’re here to review as well?”

“You could say that. I’m sure there are some other members of my team who would like to come along with their wives and girlfriends--or both.” Rayne smiled conspiratorially.

Dinner with Buddha by Roland Merullo
Daughters of Silence by R.L. Stine
Dates on My Fingers: An Iraqi Novel (Modern Arabic Literature) by Muhsin al-Ramli
The Blackcollar by Zahn, Timothy
Hollywood Kids by Jackie Collins
Zombie Surf Commandos from Mars! by Tony Abbott
Falling Sky by Rajan Khanna
Any Given Doomsday by Lori Handeland
One Night Stand by Parker Kincade
House of Trembling Leaves, The by Lees, Julian