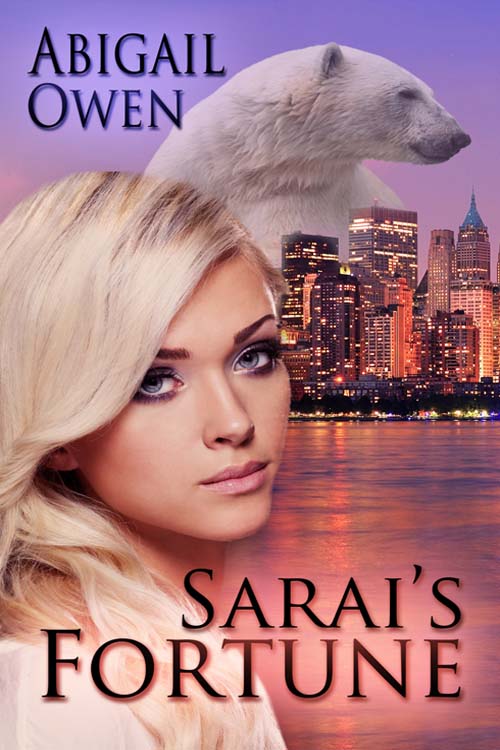 A word about the author…

Then she computed what he’d said. How was she going to get out of this? The truth was she couldn’t spar—her visions messed her up. But that was a secret she had no intention of sharing with three people.

“Not really a good idea.”

He stared at her for a long moment. Then he glanced over her shoulder at George and Scott who’d stopped to listen. “I’ve got this, fellas. Why don’t you go back up to the apartment?”

There was no doubt in her mind that was a command, not a suggestion. Clearly the guys thought so too. She watched them leave the room with wide eyes.

As the door closed behind them, Zac’s hands landed on her shoulders, turning her to face them. “Okay, kuluk. It’s just you and me now. What are you not saying?”

Sarai had never felt this vulnerable in her life. Or this scared. This man got to her in a way no one else ever had. How was she supposed to resist that?

“Why is this so important to you?”

He moved his hands from her shoulders to frame her face, his fingers threading through the dark blond strands of her hair. “Keeping you safe is important to me. I need to know how much you can defend yourself if you have to. It will help me determine just what I need to prepare for. No surprises. Okay?”

Sarai took a deep breath. He couldn’t have meant it that way. Just the thought of being important to this big, strong man connected with the frightened, lonely little girl who’d spent her life just trying to survive. But she couldn’t think that way. She had to leave him, and that knowledge made her want to cry.

“
ANDROMEDA’S FALL
is one book that you need to have mapped out time to read because it will not let you put it down. From the first page when the injured Andie jumps through the window into the Keller home to the fantastic (I didn’t want it to end) ending, you will be enthralled.”

“I cannot wait for the next shifter book. Judging from the last page, I already know who it is going to be about and I cannot wait!”

“Abigail Owen’s fast-paced and descriptive storytelling, particularly during the battle scenes, means that
ANDROMEDA’S FALL
is an easy book to become absorbed in.

[The author] introduces the very interesting idea of personal choice versus fate and I look forward to seeing how this affects Zac in the next installment of The Shadowcat Nation.”

~Kirsty Vizard, All In One Place

“Sometimes you come across a book that causes you to breathe a sigh of satisfaction once it’s over. This was that book…[I] am quite interested in the next book in the series.”

Thank you for taking a chance on a new author

and helping me achieve the dream of a lifetime!

Many thanks, first and foremost, to my readers. Your encouragement and interest have been appreciated more than you know. I would not be able to do this without a large team of wonderful people, including my editor, Lill, cover artist Debbie, and the awesome team behind the scenes at The Wild Rose Press. Thanks also to my beta readers, especially Wendy and my mom. A huge THANK YOU and I LOVE YOU to my amazing husband and children who not only support but encourage this obsession of mine.

I loved every second of writing and publishing this book. If you enjoyed this book, please look for future books in a new series coming soon!

If you would like to contact me, feel free to go to any of my author sites. I love to hear from my readers. Thanks again!

Be the first to find out about new releases, contests, giveaways, and other fun stuff by signing up for my newsletter. Go to the “contact” form at abigailowen.com to sign up.

Sarai shivered as the chill from the early morning air seeped into her bones. A faint mist swirled through the surrounding trees, leaving drops of dew on the grass, and clinging to her clothes and hair. Sarai ignored the discomfort and concentrated on her training.

The sun wasn’t quite up. Her only light came from the large mansion-like compound at her back. Sarai stood at the edge of the sparring mat, facing a dummy across the way. She focused on her target, threw, and then hissed through her teeth, unhappy with her aim. She was off her game today. She knew why. With a deep breath, she forced the thoughts plaguing her to the back of her mind and instead focused on the moment.

Sarai set her stance, right foot in back, feet apart but in line, as though she were walking on a tight rope. Shoulders square to the target. Putting her left hand out to line up, she gripped the knife handle between her fingers and hurled it, releasing the weapon just as her hand came in line with the dummy across the mat. The blade sank in at the windpipe with a very satisfying thud.

An image flashed in her mind—that of a form prowling toward her in the darkness. With a gasp, Sarai dropped into a crouch. Unfortunately, her timing was off. She knew it as soon as a body ploughed into her, knocking her over.

Sarai hit the ground with a muffled
oomf
. She didn’t bother to sit up. Instead, she stayed where she lay on the ground and turned her head to meet the laughing eyes of her best friend. The feisty brunette Andie Keller lay on the ground beside her.

“Was that really necessary?” Sarai asked with a single raised eyebrow.

Andie chuckled. “Your visions are still getting in the way of your fighting skills, I see.”

A Seer since the day she was born, Sarai often received visions of the past, present, and future. The ability was the bane of her existence, having brought her nothing but sadness, fear, and oppression. Seeing the future was a gift she wouldn’t wish on her worst enemy.

“Sarai!” A male voice sounded in the air, off to the right, behind the trees.

Sarai’s guard appeared from the tree line at the edge of the mat. He mock glared at Andie for a moment. “Figures it’d be you. You gave me a heart attack, you know.”

Andie rolled her eyes. She trained all the guards; consequently she knew how to get around them. “I practically walked right in front of your face.”

He grumbled in response as he moved back to his position. Sarai kept her smile to herself. The only person better at stealth than Andie was her new husband and Fated Mate, Jaxon Keller, the Alpha of the Keller Dare of mountain lion shifters.

Andie shifted her gaze back to Sarai. “You don’t look surprised to see me.”

Sarai sat up, leaning back against her hands. “I saw you coming home from your honeymoon several days ago.” She tilted her head. “Why the early return?”

Andie also sat up, wrapping her arms around her knees. “Keeps anyone watching on their toes.”

Sarai nodded. It made sense.

These days the world was not a safe one for cougar shifters. If it wasn’t direct enemies like the pack shifters—wolves, coyotes, and so forth—it was infighting within the dares. The Shadowcat Nation was still relatively new, attempting to force something unnatural for the sake of survival. Like their wild animal counterparts, cougar shifters did
not
function well in society. Only the preservation of their lives and their lands had forced their hands.

Each of the dares in the Nation was led by an Alpha. At one point, her greatest fear was that the new Alpha in her dare would be Kyle Carstairs. He’d once been in line to inherit the Alpha position of the Carstairs Dare from his father, Walter. After Andie had killed Walter, and her mate, Jaxon, had kicked Kyle’s ass, the sadistic bastard had escaped, gone rogue. Sarai knew better than anyone that they shouldn’t assume he was out of the picture.

In fact, the threat he, among others, posed was one of the reasons Andie and Jaxon, who were each an Alpha of their own dare, needed to come home sooner rather than later. Taking a long honeymoon at this time really wasn’t an option.

Andie looked over at the knife-throwing dummy Sarai had been working on before being tackled to the ground. “You’re getting better.”

“Dad not helping you anymore?”

Andie had been the one to start teaching Sarai basic fighting skills. She’d insisted Sarai needed to be able to defend herself. Of course, Andie had no idea at the time how true that statement was, and Sarai had accepted her friend’s tutelage gratefully. It had been Andie who’d discovered Sarai’s talent for knife throwing. Unfortunately, knives weren’t Andie’s strength, not like hand-to-hand combat. However, they
were
her father’s forte. She’d had him to secretly teach Sarai the subtler arts.

Sarai shook her head. “He says I left him behind a long time ago.”

Andie raised her eyebrows. “Good for you!” Then she frowned. “But why are you still practicing this early? I know we had to hide your training at our old dare, but here you’re safe.”

Sarai took her time answering. Eventually, she said, “Keeping my training a secret is important.”
I think.

Sarai only shared her visions when she felt it could help. Even then, she often didn’t share everything. Knowing your future was not always a good thing. Keeping secrets had become habit. Including the unfortunate fact that if her visions involved her, they weren’t always clear. They could be hazy at best, patchy often, and a black hole when it was really bad.

Andie hopped up, dusting her hands off on the seat of her running shorts. She held out a hand to pull Sarai up.

“I’m going for a run,” Andie said. “But there are some things we need to discuss.”

“After breakfast?” Andie asked as she started to back away. “My room?”

“Sounds good.” Sarai raised her hand as her friend spun around and ran into the woods at a fast clip.