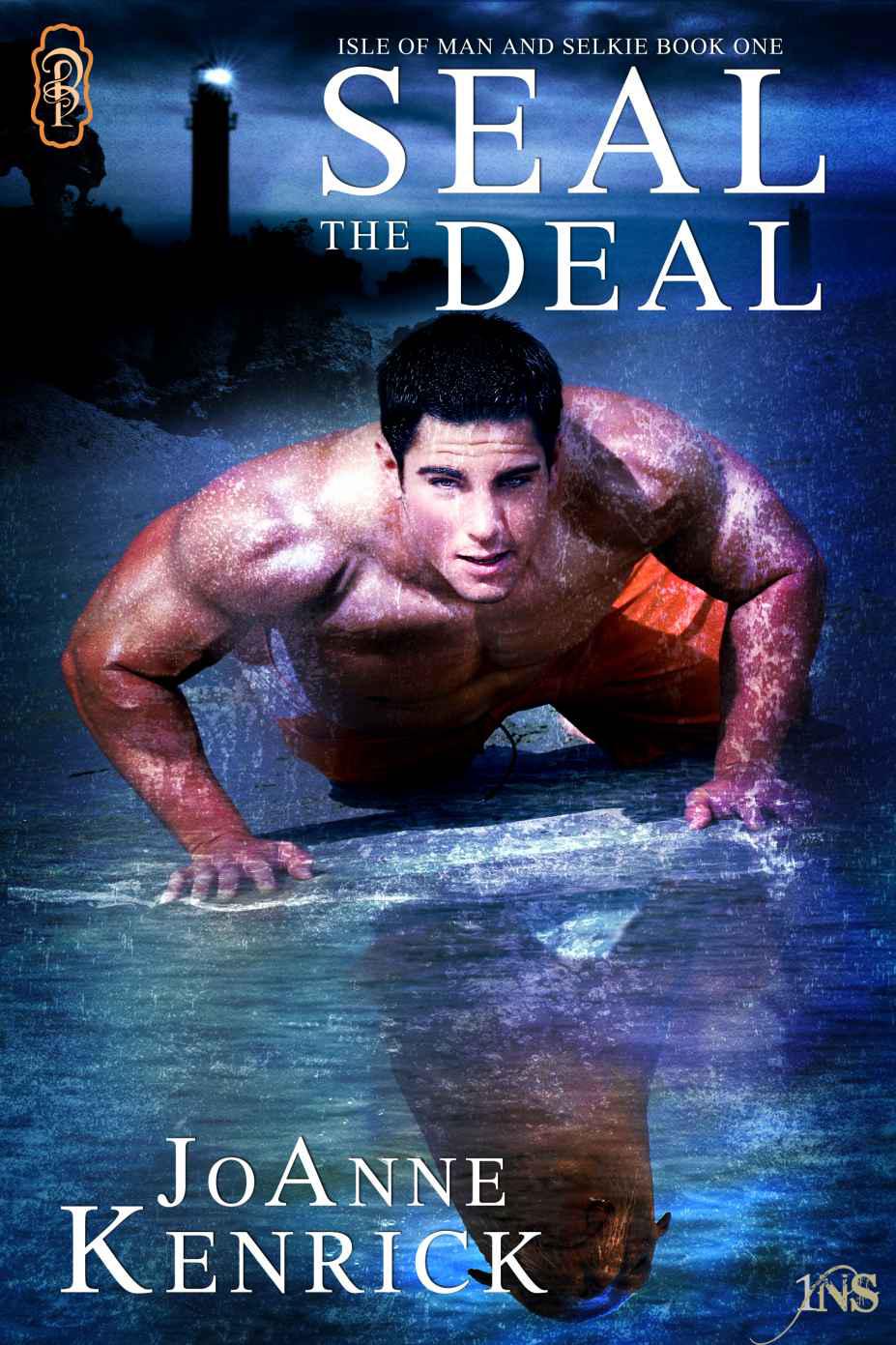 Never Too Late by Mia Catherine

Tie Down My Heart by Linda Carroll-Bradd

The Virgin Madam by Shiloh Saddler

A Dance with Death by Louisa Bacio

The Blog Affair by Alissa Baxter

When a Mullo Loves a Woman

All the Pretty Faces

To my wonderful critique readers for their brutal honesty; Taryn, Kali, Nicole, and Dawn. I adore this story and now have a major soft spot for selkies and Finn Kneale. This book is also dedicated to all my readers. Thanks for picking up my story. I hope my words transport you to a magical place you’ll grow to love as much as I do.

"JoAnne Kenrick transports her readers to that land between myth and reality where romance is all the magic you need. Don't miss your chance to visit!" ~Heather Long, bestselling author of the
Always a Marine
series.

Finn Kneale slid from his watch-point rock a few miles out from the little tourist trap where he had lived for most of his life. Under the miraculous February 29th lunar eclipse, he delved into the depths of the Irish Sea. The orb hanging over the ocean like a dimmed lantern held his last chance to undo the spell shrouding him in misery. Water lapped, and he twisted, clapping flippers over the sea foam. Waves crashed over his mottled gray-and-black seal self. Excitement rushed through him and exited in a loud, brassy roar. Then he unleashed another and another, each increasing in volume for the benefit of his aquatic friends. The barked announcement told the world Finn hoped to meet his mate tonight.

He floated in the shallows, waiting, watching as the old, white lighthouse fluctuated in and out of existence. The sliver of moonlight cast a silvery glow over the once-in-ruins building sitting proud again, high on the cliff’s edge. Its beacon shone bright, yet the gray sky pitched gloom below. He had all of twenty-four hours to
seal the deal
—as long as the lighthouse stood—then the energy balance would return to normal along the rocky shores of the Isle of Man, the historical maritime building vanishing once again. At least, that was the story his father had relayed every morning for the last four years.

Shimmying his slippery body across the pebbled beach of Port St. Mary, he took cover between tall, bulky rocks for the transformation. Safely hidden, he squeezed his eyelids closed and tried to envision his human self. Too much time had passed; he wasn’t sure his memory was close to the mark.

Soft cotton towels against his whiskers, the warm touch of the sun on his shoulders as he worked the farm, tasty homemade soup tangy on his tongue. Soft flesh of a woman beneath him. Oh, to be admired for his manliness rather than his cutesy seal features and bubble-blowing talents. Fragmented recollections of the little things were all that had survived years of watching the shoreline.

Tensing, he pulled his attention to how much he needed legs again. Long legs. Long, running legs. Resting legs…. And feet!
Oh, to walk again
.

Shivers wracked his body, flippers quaking hard, fast. Sharp stabbing pain seared him, pins and needles prickling every inch. Darkness closed around him. His tensed muscles turned to mush, and his pounding heart eased. And then, nothing but darkness.

Black-and-white vision returned, but blurred. A seagull squawked above. Focusing on the bird in flight, Finn’s sight sharpened and colorized.

He rubbed his eyes.

The pads of his fingers were hard against his skin.
Fingers?
He sat, willing digits and toes to wiggle. Blinking, he pinched his soft, warm cheeks. Pulling at the skin, he stretched his mouth into a wide smile and clamped his fingers between his sharp teeth.
Ouch
. Had the plan really worked? Was he staring at limbs? Were they really a part of him? Was he human again? To be sure his mind wasn’t playing tricks, he dragged his feet along the wet sand and waved an arm.
Fantastic
. Then he kicked the air. Delighted with the certainty, laughter roared from deep within.

No time for celebrations. To make his reprieve from the ocean stick, Finn had to find his soul mate. Fast. His father had promised to be ready for this night. God, he prayed he would be. Finn believed in his father’s convictions—he always came through on promises.

The February air bit his naked bottom and sent shudders racing through him. Covering his groin with his shed sealskin—in case he crossed paths with ramblers or fishermen, both of whom frequented the area—he hopped from one rock to the next, navigating the beach. He then raced through the overgrown meadows, focused on each foot landing on ground, the damp, rich green grass poking between his toes, tickling them. Determination fired him up. Alive with an electric buzz he had never experienced before, he ran. And ran.

Minutes later, he arrived at a modest farmhouse. Once home for the lighthouse keeper, the stone cottage now served as his parents’ home. Inside, he expected to find his mother at the table figuring out some jigsaw puzzle while snuggled in a huge, thick sweater near the pitiful, not quite crackling, fire in the hearth. His father with his feet up, a tartan blanket over his knees, enjoying some comedy show on the old television—a typical scene after a long day hauling arse around the farm.

Finn turned the handle, opened the green door, and inched inside. Rich-colored furnishings and scents of apple pie and fresh bread greeted him. A fire blazed away in the hearth, warming the now cozy cottage. Not how he remembered the cold shell of a house. Had his perspective changed? Or was the place different now? When he shifted his weight, the wide oak floorboards groaned.

The eerie sound slammed him to a stop.

Drapes closed tight, his parents huddled over his old desktop computer. How could it be? Lovers of the handwritten word, they often sat at the desk scribbling letters to send to friends who lived inland. They’d gone tech on him? Could they have changed so much in four years?

He opened his mouth to call out, but all he managed was a strangled, “Maa.” Grabbing his throat, he croaked louder. His pulse sped and he swayed, legs wobbling with a mind of their own.
Thud
. Facedown, he met the floor.

“Finn!” His father darted to his side. “Everything will be all right. You need some time to feel your land legs again is all. I reckon a hot bath will see you right.”

“And wash away the awful fishy smell.” His mother knelt beside him then swept the hair from his face “I’m so happy you dug deep in your heart and reached out to be human. I’ve missed you, my boy.”

After a soapy soak, he sat on his old bed and tucked his sealskin into the mahogany trunk where he’d kept his toy trains as a boy. With that part of him locked away, he dressed in the black designer clothes his parents had laid out for him. A penguin suit?
The irony
.

Any signs of his true nature might make his date set her catch-of-the-day free. He couldn’t risk such a thing happening. Couldn’t give her any reason to reject him. For a chance to live out his days as a normal person—as a human—he’d do anything. Even dress formally.

“Women like their men clean and fresh, so I reckon you should get rid of your furry beard.”

“Huh?” He rubbed his chin—bristling, short, sharp against his palms. Glancing in a bathroom mirror, his unfamiliar reflection confirmed he was a hairy mess. Un-groomed and out of practice in the ways of seduction. Navigating his way through the night would be a challenge. He wanted to walk the earth with legs again for the rest of his days, flippers a distant memory. Why’d a woman have to be what stood between the sea and land?

Stupid curse, damn it
. He’d never understand it and with luck he’d never have to.

“No matter how often you groom,” his father patted him on the back, “you will have whiskers and unruly hair while you’re
of the sea
.”

Finn curled his tongue, attempting to shoot out a whole load of crap at his dad. His words caught at the back of his throat and formed a series of sharp grunts. Deep, gruff, gritty. Communication was never his strong point, but he had always managed to spout angry words before. Had he forgotten how to be, well, human?

His father threw his hands up in defeat. “It’s the way of the selkie.”

“Have faith, son.” Reverence for the words of promise lulled his racing pulse back to a somewhat normal pace. He hid his suspicions in a dark corner of his mind, trying to disregard them. Stalking toward him, his father whispered, “Son, there is something I must tell you.”

“Out with it.” Had he misplaced his long-standing trust? Of all people, on tonight of all nights, he needed his father to be his tower of strength. Someone he could count on to keep his calm, give him direction.

“Your mother was born selkie, but she is as human as they come now. There is hope for you, too. Don’t you ever give up.”

Finn stumbled back. “Mum was like me? Why didn’t I know this? Is this why I turned? Did I inherit…the condition?” Words spilled from him in a jumbled mess of confusion. Scratching his whiskers, he opened his mouth to throw more at his father. Thankful to be able to speak, even if he made no sense, he sighed. Perhaps he’d be back in the swing of all things human soon.

“It’s a lot to take in, I understand, but those details aren’t important right now.”

“You’ve had years to break the news to me. Years!”

“I wasn’t sure how much you understood while you were a seal. Son, sit, listen good.” He pushed him. Finn stumbled back, landing on his father’s favorite billowy chair. “You have to focus on your mission. We can deal with the semantics later, when you’ve got more time. But right now, nothing is more important than snagging the love of your life. Understand? ”

“Use your God-given charms to get this lass to fall for you before morning, son.”

“But ain’t no woman going to love me with hair like this.”

“I’m sure she’ll think you adorable.” He patted Finn on the head.

A string of questions raced through him—about his mother, about his own condition. Too much to get his head around. But his father gave good advice; focus on what’s important. “Is she nice? Pretty?” His voice—husky, deep—seemed damaged from years of barking.