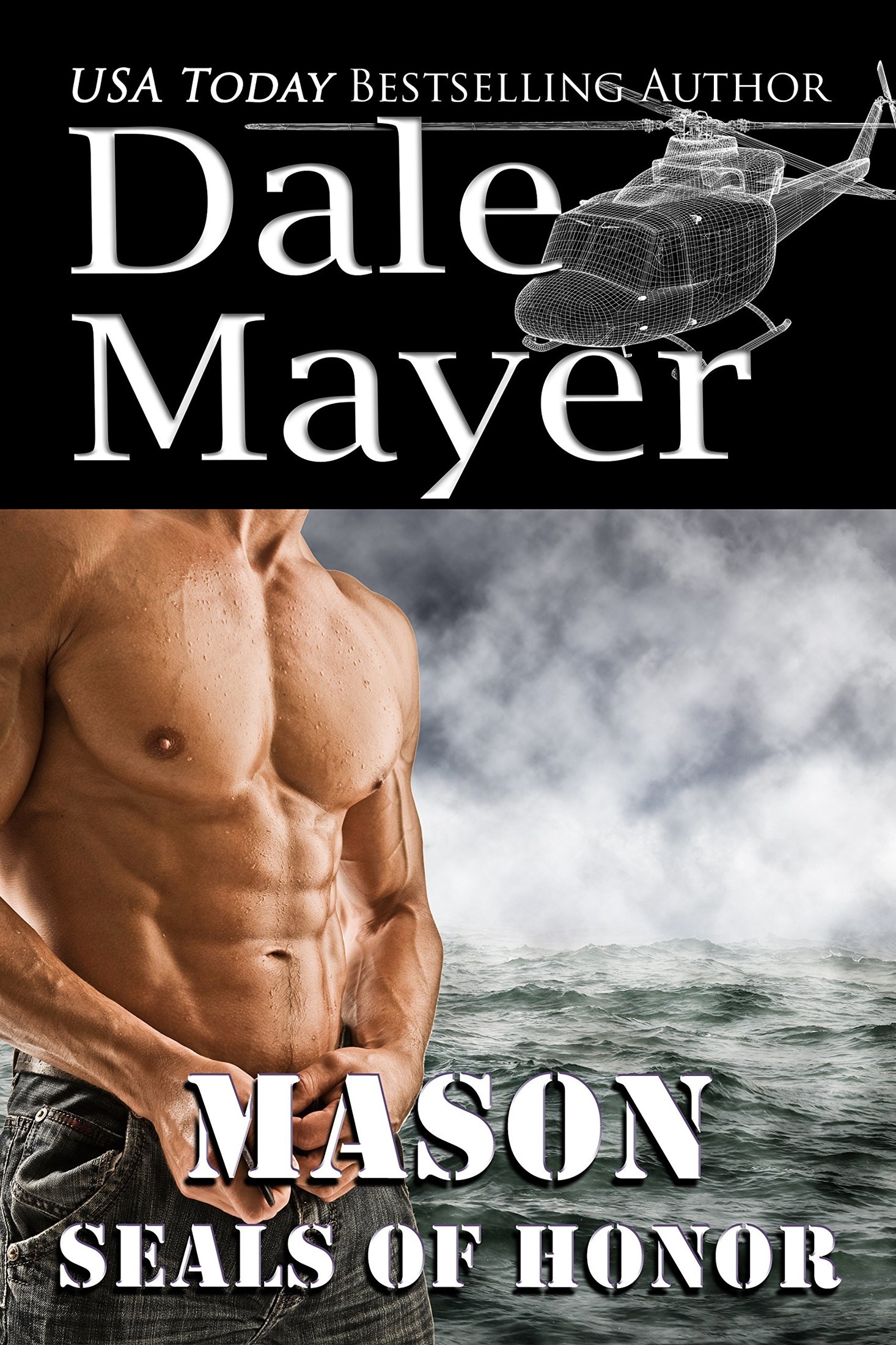 KILL OR BE KILLED

Part of an elite SEAL team, Mason takes on the dangerous jobs no one else wants to do – or can do. When he’s on a mission, he’s focused and dedicated. When he’s not, he plays as hard as he fights.

Until he meets a woman he can’t have but can’t forget.

Software developer, Tesla lost her brother in combat and has no intention of getting close to someone else in the military. Determined to save other US soldiers from a similar fate, she’s created a program that could save lives. But other countries know about the program, and they won’t stop until they get it – and get her.

Time is running out… For her… For him… For them…

All rights reserved. Except for use in any review, the reproduction or utilization of this work in whole or in part by any electronic, mechanical or other means, now known or hereafter invented, including xerography, photocopying and recording, or in any information storage or retrieval system, is forbidden without the written permission of the publisher.

This is a work of fiction. Names, characters, places, brands, media, and incidents are either the product of the author’s imagination or are used fictitiously. Any resemblance to actual events, locales, or persons, living or dead, is entirely coincidental.

This ebook is licensed for your personal enjoyment only. This ebook may not be re-sold or given away to other people. If you would like to share this book with another person, please purchase an additional copy for each recipient. If you’re reading this book and did not purchase it, or it was not purchased for your use only, then please return it and purchase your own copy. Thank you for respecting the hard work of this author.

I love to read Dale Mayer’s books… keeps me guessing…. I am getting good though trying to figure out who did it…. I am on my fourth book….

Dale Mayer’s work is always outstanding and Haunted by Death is no exception.

…Review from Haunted by Death, book 2 of the By Death Series

This is a GREAT series that you don’t want to miss out on!

…Review from Dangerous Designs, book 1 of the Design Series

Dale Mayer is a gifted writer who now has me hooked as a new fan. She characters are complex and she shares her knowledge of energy work clearly and simply. Makes for fascinating reading…

Wow! I read a lot, and I can honestly say that there a few books that I have read that I will remember for years. This is one of those books. Thank you Dale for giving me the gift of this magnificent story. It was both heartbreaking and hopeful at the same time.

…Review left on Skin, book 1 of Broken and yet…Healing Series

Touched by Death is an outstanding novel by Dale Mayer. Unlike her usual novels that contain paranormal activity, this novel is sheer malevolent actions from ordinary humans.

…Review left on Touched by Death, book 1 of By Death Series

Dale’s books are spellbinding in more ways than one. She has a unique way with words. Her characters are fun and funny and loving. I love the way the story flows. Her characters all have personality. She takes you from suspense to love, then fear love and eternal love.

I
T WAS A
shitty day to die. And sure as hell wasn’t on his damn list of things to do when he got up this morning.

But with a gun pointed right at him by an old asshole he’d been tracking, shit happened in its own time. Including in the jungles of Mexico.

The grin on Daniel’s face was enough to make most men cringe. But Mason wasn’t most men. And he cringed for no one.

Least of all this guy. Daniel had washed out during BUD/S training. Hell week had kicked his butt and had kept on washing his sorry ass all the way back home. The two men had been friends once. But not making it through the worst week of his life had left a bitter taste on Daniel’s lips. He’d finished his time and walked away from the military first chance he had.

It happened that way for some people. Not everyone could handle failure. For some defeat ate a bitter corner into their psyche where it festered.

He’d never have thought that would be Daniel’s path, but Hell week changed a man. For better or for worse. For Mason, it was that tilt of the hat that said he could handle anything. He’d already known it but having that added to his life achievements, well there’d been no feeling like it before or since.

Apparently, failing had an effect on Daniel for the same reason. He’d quit and gone to the other side – a mercenary for anyone with enough money to pay for his services.

“It’s nice to see you too, Mason,” Daniel said affably. “Especially as you’re looking down the end of my gun.”

With a slight nod of his head, Mason gave him the point. Not that anyone was keeping score. “And the woman? Where is she?”

Daniel’s grin widened. “Not your problem.”

“Maybe not, but she is going to be your problem.”

“I see you know her.” Daniel slapped a hand over his cheek and slowly rubbed the long red scratches visible between his fingers. “That damn woman is a pain in the ass. She deserves everything coming to her.”

Mason’s insides iced over. There were a lot of reasons for a woman to fight so hard she’d scarred Daniel – and none of them were good. “Being sold to the highest bidder? Really? She deserves to be kidnapped? Beaten?” There would be worse treatment for her too, both men had seen too much of it. Neither needed to bring it out in the open.

“She’s developing new military tracking software. And she won’t share it.” Daniel shrugged. “So what does she expect?”

She expected her country to protect her. And Mason had no intention of failing. “So, she’s alive?”

“So far. If she doesn’t give over…well, you know how it is.” Daniel tilted his head as if listening for something.

Mason did indeed. “Waiting for someone?” he asked casually.

“Not you. You’re a dead man and she’s going to be picked up in about…thirty minutes.” He glanced down at the watch on his wrist.

That was just about enough time. Mason hoped.

A hawk cried, the large bird presumably circling overhead. Mason made as if to look up but kept an eye on Daniel. Sure enough Daniel looked up to search for the bird. He’d gotten slack. Cocky.

That was all the time Mason needed. He dove forward, grabbed Daniel’s leg. The gun went off, but he’d lost his aim as he went down. Mason didn’t waste any time, he took Daniel out in seconds. The unconscious man lolled beside him as Mason quickly gave a responding hawk call in return. Hawk, one of the men on his team, had taught them all how to imitate the powerful birdcall. Now they used it to signal between the six team members.

His men separated from the trees around them. Daniel never had a chance but he hadn’t known it. Typical.

“We need to find her. We’ve got thirty minutes before she’s to be picked up.”

As silently as they moved out of the trees, they slid back into the forest. They knew Tesla Landers was here somewhere close by. And her time was running out.

Mason secured Daniel, resisting the urge to kill the bastard for hurting the woman, but he was too valuable to kill. They needed the intel he had.

Someone would swing by and pick him up in a few minutes.

Now for Tesla. She came first.

T
ESLA
L
ANDERS – HER
friends had loved it when the car company started up, saying the two of them were well matched, both with innovative ideas, drive and a sleek look – glared at the dark plank wall in front of her. Tears threatened but she refused to let them drop. She had to stay strong. She had to believe she’d be rescued. That she had value to
both
sides in this war and not just the wrong one.

She had to trust.

Or else she was lost.

And staying strong wasn’t an option – it was
everything
. Everyone had a breaking point. She refused to consider this was hers.

She closed her eyes and for the hundredth time in the last hour she let the litany of bolstering sayings ripple through her mind.

She could do this.

She would do this.

Every disaster had a silver lining.

The military looked after their own.

She was a valuable member of the team. Or would be if she could close the damn deal.

She couldn’t help but worry that even for all those things, they might not find her in time. The SEALs were good, but they weren’t perfect. She clenched her jaw, willing the cry to stay hidden within. Her arms had been yanked and secured behind her, the pain so bad she’d bitten the inside of her cheek to hold back her sobs. She’d be damned if she’d let the assholes know they were hurting her. They looked like the kind of guys to get an extra jolly out of that.

Now, every breath she took, her ribs expanded and pulled on her shoulders. She knew she would move past the pain into a numb state eventually, but she wasn’t there yet. She closed her eyes, wondering how the hell she’d gotten to this place in life. Right – because she wanted to save lives. Or rather, she didn’t want more unnecessary lives lost like her brother’s. He’d been stationed in Iraq when the truck he was riding in had driven over a land mine. No one had survived.

A techie since diapers, she’d been determined to find a way to track the weapons used against her countrymen and save more of the brave soldiers like Harry. To find the land mines before they were triggered. And that technology was what the enemy wanted. Why had she never really considered that if her software could save
her
people then other countries would want it to save theirs?

And how the hell had they known what she was working on? That bugged her. She’d been working as quietly as possible. The only answer was someone had sold her out. And damn it, that hurt. She knew her team. Loved them all. To think of someone doing such a thing broke her heart. Maybe they were desperate for money, but it could have been they were desperate to save someone instead. It was obvious the enemy wasn’t planning on holding back and didn’t care who they killed to get what they wanted. The only reason she was alive still was they wanted more from her. The software hadn’t been completed. There were bugs still. A few things to pull together. But it was so damn close. They’d kill her once it was operational.

Intimate Strangers by Laura Taylor
The Soul Stealer by Maureen Willett
Tananguard 02 - To Love a Lord by Diedre Clark
The Dungeoneers by John David Anderson
Planesrunner (Everness Book One) by McDonald, Ian
The Thanksgiving Day Murder by Lee Harris
Forbidden Seduction (Lee County Wolves Series) Book #2 by Teresa Gabelman
I'll Get By by Janet Woods
Men in the Making by Bruce Machart
Crazy Bitch (Bitches and Queens) by James, Rachael