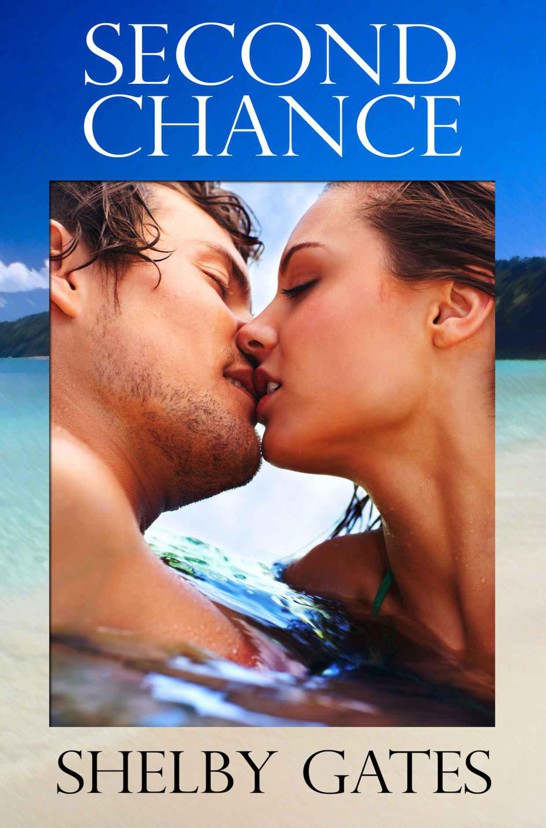 This is a work of fiction. Names, characters, places and incidents either are the product of the author's imagination or are used fictitiously, and any resemblance to any persons, living or dead,  is entirely coincidental.

This book is protected under the copyright laws of the United States of America. Any reproduction or unauthorized use of the material or artwork herein is prohibited without the expressed written consent of the author.

Elle Middleton stepped out of the airport, set her bag down on the curb, closed her eyes and breathed deeply.

Along with a little jet fuel, of course, but the salty air was there, even though she was several miles from the shore. It was always there and it always took her back. Maybe she was imagining, but she didn’t care.

Keefer Island had always been her home away from home and, for the next three months, it was simply going to be
…home. For better or for worse.

She picked up the bag and slung it over her shoulder, rolling her massive suitcase behind her. She waved her hand at a taxi and the yellow car pulled to the curb in front of her. The driver, a grizzled man who looked like he’d be more at home on the ocean than in a cab, took her bags and opened the door for her. She slid into the car, her bare legs sticking to the blue, vinyl bench seat and he closed the door behind her.

“Where to, Miss?” the driver asked when he got behind the wheel.

He nodded and she could see him smile in the rearview mirror. “Love the island.”

Elle didn
’t say anything, just stared out the window. The sun was high and bright in the sky and she imagined its rays dancing on the ocean, warming the water, flavoring the air.

The drive from the airport was only a few miles. With no traffic, it would have taken ten minutes, max, to navigate the two-lane highway that led to Benton, the small town that linked to the island via bridge. But it was summer and the roads crawled with minivans and SUVs hitched with jet-skis and boats. The crowds descended, just like they always did, to fill the island’s rental cabins and beach houses and bed-and-breakfasts.

“This isn’t your first time?” the driver asked.

Elle shook her head. She wasn’t one for meaningless conversation. “No.”

But the driver was. He pressed. “When were you here last?”

Years, actually. Twelve. She thought back to her last summer on the island, the summer before her senior year. She’d been young, impetuous, full of dreams. What had happened to that girl?

But she knew what had happened.

And a broken heart.

He nodded, his shaggy salt-and-pepper hair bobbing up and down. “Not much has changed. Nothing ever does on that island.”

“So what’s bringing you back? Funeral?”

Elle shook her head, a twinge of guilt niggling her. “No.”

“No?” He eyed her through the mirror. “Wedding? Reunion? Those are the biggies.”

It sounded foreign, even to her own ears. People didn’t come to Keefer Island to work. They came to play. To relax.

The highway curved up and over and suddenly the town of Benton was in front of them, nestled along the sandy shore of the Atlantic. Her heart leapt at the familiar sight, at the clapboard buildings that hugged the shoreline, housing ice cream shops and crab shacks and quirky stores brimming with souvenirs and funky trinkets. Her eyes drifted past the town and focused on Keefer Island, the tiny patch of land connected to Benton by a low, arching bridge. She felt a tug on her heart, familiar but strange. It had been twelve years since a place had pulled her heartstrings and she swallowed hard, trying to stem the tide of happy-sad tears that threatened.

Max—the driver had offered his name—drove slowly through the town, allowing her to drink everything in.

She allowed a sigh to escape. “Yes. Exactly.”

And it was. Sidewalks teeming with people clutching ice cream cones and shopping bags and buckets of sand toys. Beach cruisers weaving through streets clogged with traffic. And everywhere, smiles and sunburnt noses.

She gave the driver the address of her grandmother’s cottage and he nodded, maneuvering the taxi into the right lane so they could access the island bridge. If she was being truthful, she was there for two jobs. But the big one—selling her grandmother’s house—was the one she was looking forward to the least. Her grandmother had left the cottage to Elle’s mother when she died. And Elle’s mother refused to visit and refused to rent it. She despised the beach, but especially Keefer Island. Elle sometimes wondered if she was adopted.

This spring, her mother had finally decided to sell it, but she didn’t want to be responsible for anything, didn’t want to come to the island to see what kind of shape it was in. She’d asked Elle to do it for her.

At first, she’d said no. The last thing she wanted was to go back to the island. But then everything had unraveled—her job, her life—and she knew going back was what she needed. Despite the bitter memories, there were good ones, too. Good ones that she would relive and reflect on as she got the house ready to sell.

When the nanny offer came through, it cemented her decision. She could live in the cottage for the summer, make some much-needed money as a nanny, and get the house ready to go on the market. And get a handle on just what the hell she was going to do with her life.

The driver stopped the taxi and glanced over the seat. “Here we are.”

Elle looked out the window and felt nostalgia wash over her. She smiled. “Perfect.”

And it
was
still perfect.

A pale yellow cottage with a weathered-shake roof and white-trimmed windows. A white picket fence that listed from age and wind, its entrance-arbor teeming with pink bougainvillea. Her heart fluttered as she took it in, as she pictured the rooms that careened into each other via warped, wooden floors, as she thought about the faded wallpaper and the lavender-scented bedsheets and the teakettle whistling on the ancient stove. It needed work—lots of it, especially if it was going on the market—but to her, it would always be perfect and magical just the way it was.

“Is this the final stop?” Max asked, shaking her from her reverie.

Max shot her a puzzled look.

She fished in her purse for the address she needed, withdrawing a sheet of paper. She recited it to him.

He pulled away from the curb and Elle felt a small wave of excitement roll through her. Seeing the cottage, she suddenly felt good. She could spend her summer awash in the good memories—of time spent with her grandmother, of months filled with sand and sun—and try to forget the bad ones.

Max drove the taxi four blocks north, the road curving with the contours of the island, and stopped in front of a large A-frame home at the end of a cul-de-sac. Two surfboards were perched against the long porch that ran the length of the house and beach towels hung over the railing. A mini-van sat in the driveway, the sliding door open, and a Big Wheel was flipped over in the middle of the yard.

She pulled cash from her purse and handed it over to Max. “Thank you. For being patient.”

“Yeah, I’m working for them this summer,” she explained. “As a nanny. I’m living in the cottage we stopped at first, but I’ll be spending the bulk of my time here.”

Max frowned. “What about your bags? We should have dropped them off.”

He nodded. “Alright. I guess it’s an easy walk. But you ever need a ride, you call me.”

She collected her bags and slid out of the seat and watched him make a U-turn and drive away.

Elle walked up the driveway and stepped up onto the porch. She hesitated for a minute, her finger poised above the doorbell. She’d read the bio of the family she’d be nannying for but she still wondered what they’d be like. And what the job would be like. Nannying was a far cry from teaching. She swallowed. She could do it. She liked kids. This was what she wanted. She forced her hand closer to the button and rang the bell.

A tiny voice shrieked with excitement and she couldn’t stifle the chuckle that bubbled up inside of her. By the sound of it, she might have her hands full. And she was pretty sure she would be OK with that.

The door opened and a woman with a long ponytail and a baby on her hip smiled at her. “Hello?”

The woman blinked several times. “Hi. What can I do for you?”

Elle glanced back toward the mailbox, looking for the house number. Yep. Right address.

She nodded. “I am. But forgive me, your name isn’t ringing a bell.”

The woman named Mary paled. And then muttered something that sounded very much like, “Oh, shit.”

Elle stared at her. “Is there a problem?”

Mary shifted the baby, hoisting him further up on her hip. He gave Elle an open mouth grin, full of drool and two bottom teeth, and squealed again. “Oh, crap. I…I don’t know how this happened. Why don’t you come in, see if we can get this mess straightened out?” She swung the door wide and motioned Elle inside.

Elle made her way into the house, depositing her bags in the hallway. “I don’t understand
…”

Mary thrust the baby into her arms. “Here. Hold Gus for a minute.” She flew down the hall and into the kitchen.

Elle bounced baby Gus as she listened to Mary open and slam drawers. Maybe she’d gotten the date wrong. She’d never been great at maintaining a schedule. It was one of the reasons she’d loved coming to the island and to her grandmother’s. Time just seemed to stand still. They kept to a natural rhythm, waking and eating and going about their day. The one summer she’d gotten a job at the island bakery had been difficult, at best—her grandmother had to create a weekly schedule on the chalkboard mounted in the kitchen and provide Elle with a watch so she’d know exactly when she needed to hop on her bike and head down to the shop.

She hoisted Gus on her hip and fumbled inside of her purse, pulling out the welcome letter from Nice Nannies. She’d gone through a rigorous interview process and had received a simple file regarding the family she’d be nannying for during the summer months. She went over the information in her head. She knew Mary was married to Kevin and that they had two kids: a 6-month old baby—Gus—and a 4-year old named Sam. They needed someone Monday through Friday, approximately five hours a day. Some weekend days and evenings, too, on an as-needed basis. It was the perfect number of hours. And it would provide her with the income she desperately needed.

Mary finally returned, her color not much improved.

“Is everything OK?” Elle asked, bouncing the baby.

Bones to Ashes by Kathy Reichs
Kicking Ashe by Pauline Baird Jones
Animus by S. W. Frank
Take my face by Held, Peter
The Present and the Past by Ivy Compton-Burnett
Traitor's Sun by Marion Zimmer Bradley
The German by Lee Thomas
The Design of Everyday Things by Don Norman
I'll Never Let You Go (Morgans of Nashville) by Mary Burton
Alias Dragonfly by Jane Singer