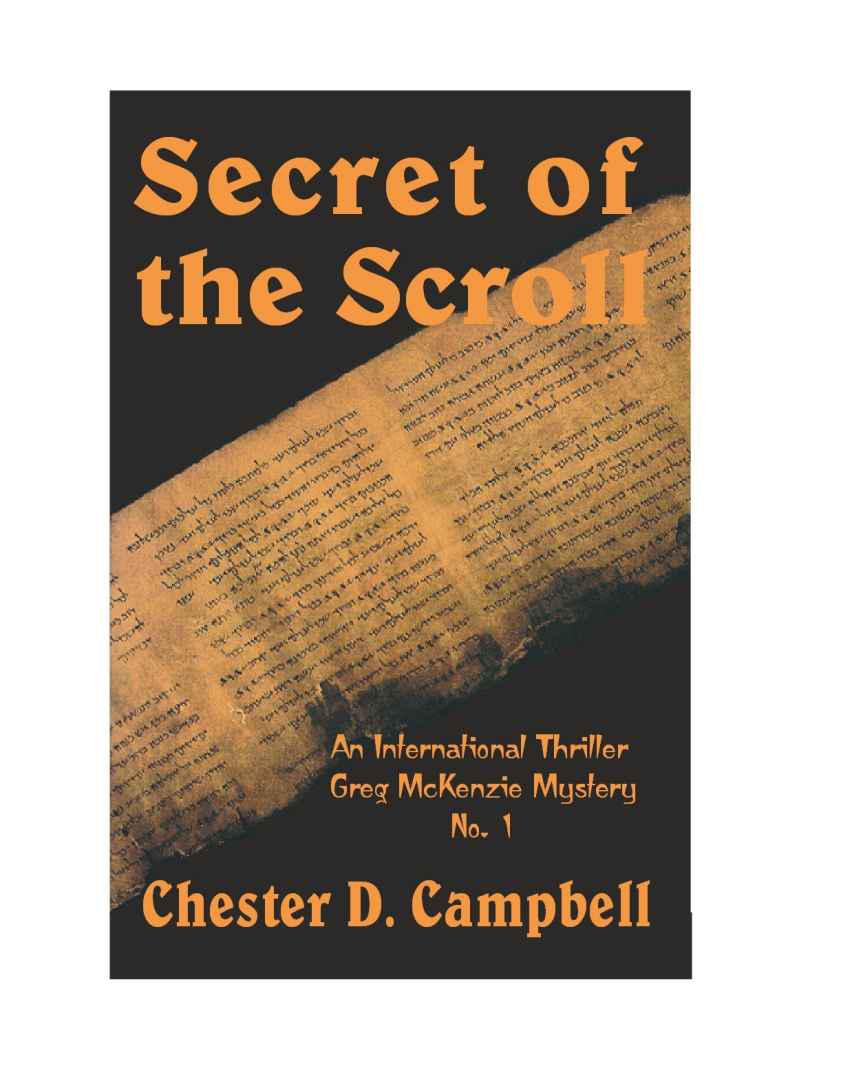 What they’re saying about
Secret of the Scroll
:

"A thriller in every sense of the word...
Campbell
makes McKenzie into a 65 year old rebel who is irresistible and appealing. Great!
"

"A superbly written book with an excellent plot."

—
All About Murder Reviews

"This is a fast, exciting read. It grabs you and won't let you go."

"A riveting, edge of the seat book that is set against the backdrop of the modern
Middle East
."

Secret of the Scroll

This book is a work of fiction. All names, characters, places, and incidents are products of the author’s imagination or are used fictitiously. Any resemblance to actual events or locales or persons, living or dead, is entirely coincidental.

All rights reserved. No part of this book may be used or reproduced in any manner whatsoever without the written permission of the copyright owner and Night Shadows Press, LLC.

The Good, The Bad and The Murderous (2)

Khaled Assah literally stumbled onto the hidden cave. In fact, he came within a whisker of falling into it.

An honors student at the
University
of
Jordan
, he had been chosen to work on an archaeological dig at the ancient settlement of
Bethany
in the
Hashemite
Kingdom
. On this late October day, a broad strain of curiosity had prompted him to stroll across the
qattar
at sunset, a time when the chalky, whitish hills flanking the
Jordan River
north of the
Dead Sea
took on an eerie luminescence. Khaled had been attempting to half-walk, half-slide down a steep hillside when he reached out to steady himself on a scrubby green bush and plunged his leg into a crevice.

After elbowing the bush aside, he found the narrow entrance to a cave tucked into the rock formation. The archaeology team had identified two caves in the area as sites occupied by Christian monks over the centuries. They had found another cave that contained writing instruments and other signs of possible use by Jewish scribes in New Testament times.

A slim youth, Khaled could easily slip through the opening in the sandy stone. But first he took the jacket he had brought along to wear after dark and draped it across the scrubby bush. He removed a flashlight from his pocket, switched it on and pointed the narrow white beam into a small rectangular room, not unlike a Nabatean tomb he had visited at
Petra
. The rough-textured walls appeared bare. As he stepped inside, sweeping the circle of light around the cavern, he spotted an opening about two feet square in a far corner. He thought it might be the entrance to a passage that penetrated deeper into the marl formation, but when he moved closer he found it extended only about six feet.

As he stooped to peer into the opening, the flashlight beam bracketed a dark shape in the back corner. He scrambled on his stomach into the crypt, then slowed his pace as the dust set off a coughing spree. The object was a reddish-brown clay jar, a smaller match for the pots that held the priceless horde of documents known as the Dead Sea Scrolls, dating from the first century A.D.

Stretching out, he grasped the jar, which stood nearly a foot tall, its distinctive lid wedged tightly into place. He backed out of the chamber on knees and elbows, clutching flashlight and jar.

He struggled outside with his find and plopped down in the darkness. Could it be, he wondered, that a nineteen-year-old novice from the
West Bank
had discovered an ancient relic missed by all the Ph.D.’s and professional archaeologists who had combed the area over the past several years? It had happened before. Dead Sea Scroll researchers working near Cave 4 at
Qumran
were completely unaware of the treasure-packed site’s existence until Bedouins discovered it in 1952. A sly grin enlivened Khaled’s face.

He knew he should take his find to the head of the team that had developed the
Bethany
site. But the excitement of discovery overpowered Khaled’s better judgment. He took out his pocketknife and pried off the lid. Shining the light inside, he saw a coil of something like paper or fabric. He inserted two fingers and slipped out the jar’s contents. From the feel of it, he was sure the material was parchment, or “leathers,” as some called the material–animal skin, probably sheep or goat, used for writing documents in ancient times.

Propping the flashlight against the bush, he peeled back a covering layer that protected a rolled-up scroll. Then he pulled the parchment open enough to see some of the lettering. Khaled had studied Hebrew and English, as well as Arabic, and immediately recognized what he had found. The writing was classical Hebrew, in a style similar to what he had seen at
Jerusalem
’s Shrine of the Book, a repository for some of the Dead Sea Scrolls.

As Khaled stared at the faded writing, he anguished over what to do. Now he was certain he had made a real discovery. But was it something of substance, a document that would throw new light on a period of antiquity, or was it just a piece of historical trivia? In the end he made a practical decision. He had gone this far; he might as well finish the job. He returned the clay pot to the cave and slipped the scroll inside his jacket.

Khaled’s room in the buff-colored communal structure was quite small. He hardly had space for more than a bed, a table with a lone chair, and a few shelves piled with stacks of books and clothes. The ceiling fixture provided plenty of light, however, and the table was large enough to hold the document. He locked the door, pulled off his dusty clothes and tossed them in a corner. He had met one of his fellow students on the way in, drawing a smirk and a query. “Who have you been wrestling out on the
qattar
?” The observation struck him as far too close for comfort, and he had hurried to his room.

He unfolded the parchment. Though somewhat brittle, it was in fairly good shape. The jar had been tightly closed and secreted deep inside the dry cave.

Hebrew was a difficult language at best, without vowels, and, in early times, without punctuation. The document was not lengthy, but he pored over it for hours, checking and re-checking his reference books. What he wound up with was the fascinating account of a first century Jew, a follower of the Jewish mystics known as kabbalists. The writer was among a group of Jews who conspired to retrieve a cache of golden lampstands from Solomon’s temple found concealed near
Babylon
. The group returned to
Jerusalem
but encountered Roman troops and promptly hid their spoils. Soon caught by the soldiers, the Jews were sentenced to die. Only the writer of the scroll had managed to escape.

Studying the document, Khaled felt his excitement build as the scroll’s message became clear. He was well versed in the Old Testament as well as the Koran. According to the Book of Jeremiah, the gold and silver fixtures from Solomon’s temple were carted off to
Babylon
when Nebuchadnezzar ravaged
Jerusalem
in 587 BC. Those lampstands were the seven-branched candelabrum now known as the menorah–the sacred symbol of the current Jewish state. If such artifacts could be found today, Khaled reasoned, they would be worth a fortune to the State of Israel, or to some wealthy Jew who would surely ransom them for the Israelis.

Khaled returned to the passage where the writer had dealt with the hiding of the lampstands. Then he noticed the cryptic statement: “the location will be found within.” His reference books told him the kabbalists had worked on some sort of secret writing.

Before drifting off to sleep in the early morning hours, he knew precisely what his next move would be.

The following day, Khaled Assah nervously lied to the project director that his mother was seriously ill and he needed to make a quick trip home to Ramallah, the
key West
Bank town near
Jerusalem
. He promised to return two days later. Packing a small bag with only enough clothes for a weekend, he boarded a bus headed for the
Jordan River
’s
Allenby
Bridge
border crossing. He did his best to ignore the pounding in his chest and even coaxed a bit of sympathy with his cover story of a sick mother. But he encountered no trouble moving through the crowded Israeli border control facility just beyond the bridge. Wandering past the row of low date palms outside, he spotted his cousin Abdullah Kafi waiting in a dusty green Ford. Khaled noticed a young female security guard watching as he climbed into the car, but it appeared no more than idle curiosity.

After they cleared the last checkpoint, Khaled gave a boyish whoop and carefully stripped off his heavy brown cotton shirt. He draped it across the back seat, then retrieved a plain white T-shirt from his bag and pulled it on.

“Now explain to me what you have done,” Abdullah said with a smile. He was the same age as his cousin but stocky and self-assured. He hadn’t hesitated to follow through after receiving the phone call from Khaled. “I find it hard to believe you’ve done anything illegal.”

“I’ve sewn inside my shirt an old parchment scroll that could make us rich.”

His cousin gave him a skeptical frown. “Oh? And what if they had done a pat-down search at the border?”

For a moment, Khaled’s face paled. But his smile quickly returned. “Praise Allah, they did not. And now you have to help me find someone who can solve a riddle. If my hunch is right, we’re about to embark on a fabulous treasure hunt.”

Sergeant Levi Katz, a husky, dark-haired veteran of the Israeli Defense Force now working for the border police, was returning to his post when he noticed the young Palestinian removing his shirt in the Ford headed up the highway toward
Jericho
. It seemed an odd thing to do so soon after the youth had apparently crossed over from
Jordan
. He got only a slight glimpse of the license plate, but it was enough to identify the car as belonging to a Palestinian from the Ramallah area.

Katz was quick to report what he saw on arrival at the heavily-armed check point, where vehicles were searched inside and out, including underneath with large mirrors mounted on poles.

“They checked out okay. We didn’t examine his shirt, though. You think he was hiding something?”

“I don’t know,” said Katz. “I just thought it was strange. I think I’ll call the immigration people.”

After listening to Katz’ explanation, an employee at the passport control office told him to hold while she checked into it. She came back a few minutes later. “Irina remembers him. She saw him get into the car that was waiting. She thought he walked sort of funny . . . stiff-like. As if he had a board up his back.”

“Khaled Assah,” the passport lady said and spelled it out. “Palestinian. Attends the
University
of
Jordan
, but his home is Ramallah.”

Katz thanked her and turned to a comrade holding a clipboard. “What was the license number on that green Ford?”

After scribbling it on a sheet of paper, he lifted the phone again and checked his watch. They were probably close to
Jericho
by now. That meant Palestinian control. He dialed an unlisted number in
Jerusalem
, identified himself and described what had happened.

Swords of the Imperium (Dark Fantasy Novel) (The Polaris Chronicles Book 2) by Choi, Bryan, Carson, E H
This Place Has No Atmosphere by Paula Danziger
Chasing Glory by Galbraith, DeeAnna
For His Name's Sake (Psalm 23 Mysteries) by Viguié, Debbie
Courting Trouble by Kathy Lette
Pepper by Marjorie Shaffer
Wheel of Stars by Andre Norton
The Awakening by Amileigh D'Lecoire
Impostors' Kiss by Renea Mason
The Lost Mage by Difar, Amy